Wasn't really planning on going for the platinum trophy and just wanted to see the story since I enjoyed Persona 5 but not that great at ARPGs. Then I looked at the list and thought, "Hmmm, it's actually obtainable," and changed my mind. It's a fairly easy platinum trophy... as long as you have the patience for level grinding. You can play through on easy and there aren't any complete/collect all trophies other than the usual fuse all Persona as with other Persona games.

I played the game on easy and finished at 33 hours, doing all the Band and Sofie shop related requests. Then it took another 27 hours to do the bonus requests and level grinding for the "Eternal Bonds" trophy. The average time seems to be between 50 - 60 hours for this platinum.

So as with my recent trophy guides, here are tips on what you're likely to miss if you just played through the game without looking at a guide, instead of covering trophies you're guaranteed to get anyway.

You may want to grind the Eternal Bonds trophy when you reach Osaka as it may be easier at that point instead of waiting until you finish the story like I did.

28th Feb 2022
Added tips for obtaining Band XP in each location which could possibly make the Eternal Bonds trophy easier for those who haven't reached or left Osaka yet. 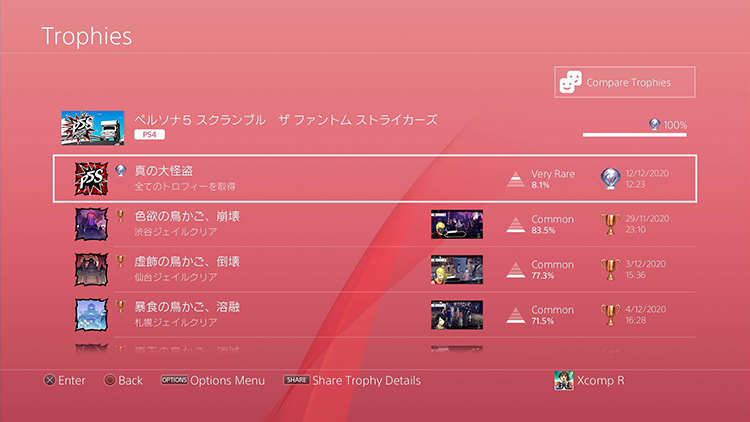 Most of the recipes can be bought from shops although a few come from quests. You're only required to cook 12 out of the 19 dishes available. Each dish you cook for the first time will give you Band XP so that'll help with the "Eternal Bonds" trophy a bit.

The earliest time you can obtain this trophy is in Osaka.I ended up collecting all without a guide, just chatting to party members, visiting all shops and doing requests.

Four of the dishes will be Leblanc ones you'll automatically get which means you just need to find 8 more to cook. Here is a list of the ones you can buy or obtain by talking to your party members. 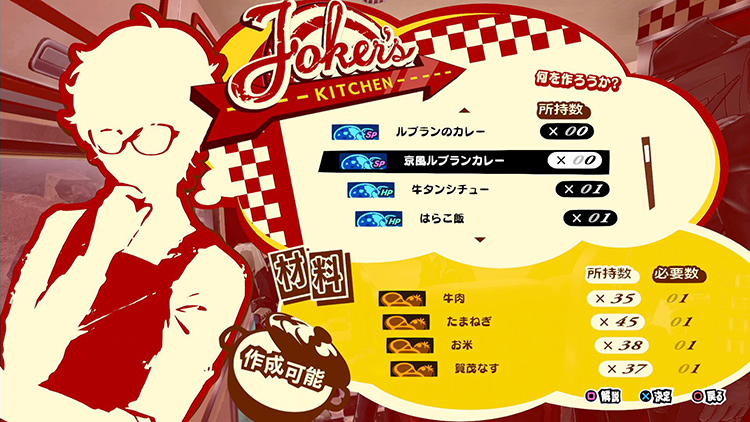 Those Who Heed The Call, What Are Friends For?

There are over 80 quests so getting the 50 quests "Those Who Heed The Call" trophy is easy enough. Do note the completed counter doesn't carry over to re-playthroughs!

I didn't miss the "What Are Friends For?" trophy either. As long as you don't ignore the characters that call you and go talk to them right afterwards, it shouldn't be a problem. Should be unlocked by the time you're in Osaka as that's where the last of the friend related requests will be.

Just for completeness, here is a list of when and where they happen. 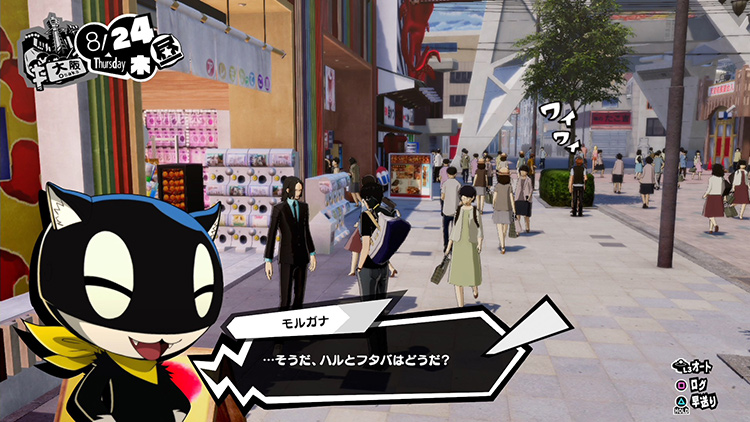 Talk to the gang after completing each Jail to get souvenirs. You don't have to collect them all but in case you want to collect them all like in Persona 4 Golden anyway, here's a list of the easiest ones to miss because you didn't talk to your party members:

I actually ended up missing the Sapporo one as I was initially just rushing as mentioned earlier. 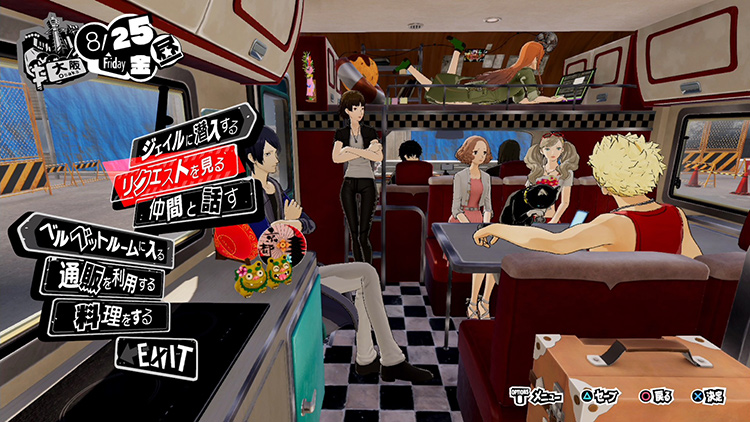 There's no find all treasure chests, just open 50 chests which includes repeatable ones so another easy one, although I didn't get this until I was clearing out dungeons to make the Treasure Demon spawn. 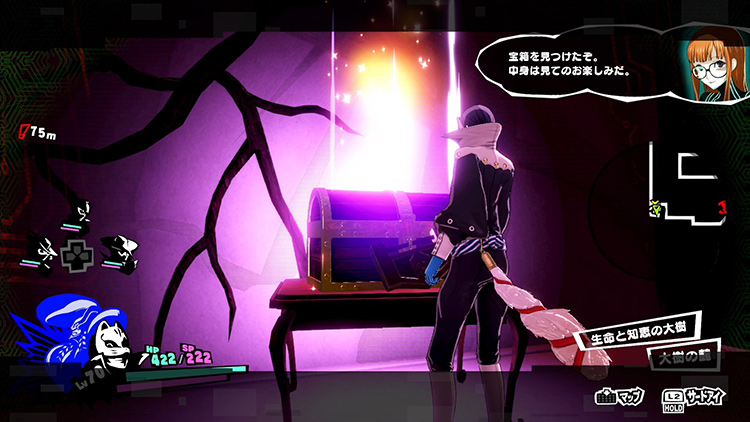 Juggle between characters; don't stick to favourites as they need to be active to unlock all their Master Arts. It's like levelling up, the more they do in battle the more they level so keep the character as active i.e. set as the one you're controlling.

You can check how far you are in unlocking their Master Arts by going to status. Despite having a list of button sequences, I didn't even have to bother remembering them. Simply just button bashing was enough to unlock all the arts. 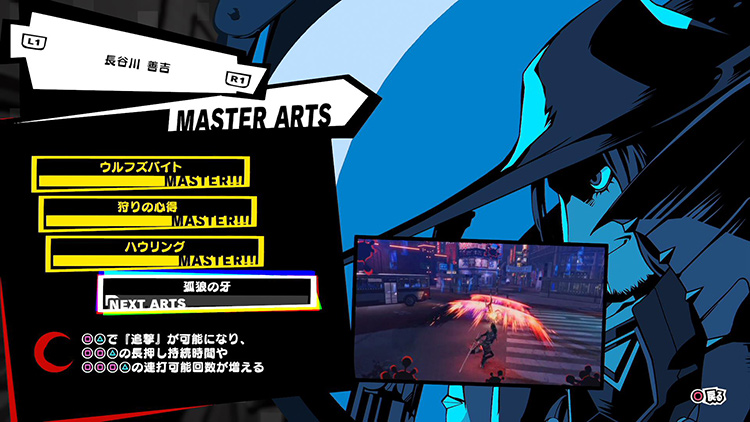 Prioritise maxing the Treasure Hunter Band skill so you can achieve this hunt 10 demons trophy while playing.

If you do end up not having enough like me, just stick around in a dungeon for a while repeatedly clearing out the Shadows. Once you've been around long enough one will appear. They give you a fair sum of money too. 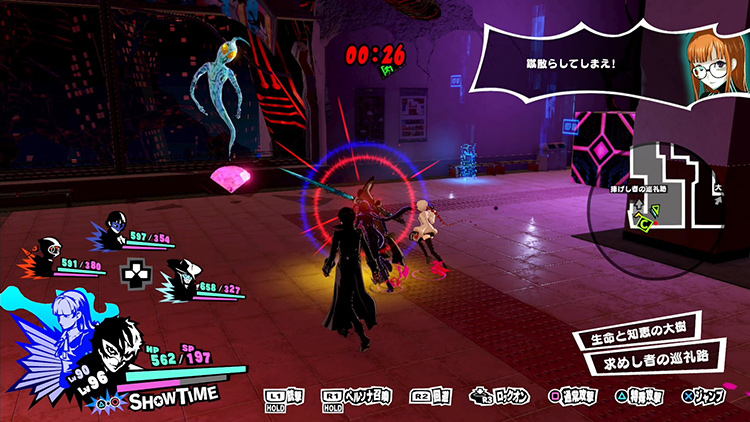 To unlock this, you'll have to fight the story bosses again via requests.

After you beat the final boss, you fight them all a third time again via requests; "Painful Past" and "Painful Past+" series of repeatable requests. Once you beat the Rebel you'll have access to New Game+ with the new Merciless difficulty if you try to load the save file marked with "Master". This is also the only way to unlock the last Persona, Lucifer along with Incense items that boost your stats for 200,000 Yen each.

As with other Persona game bonus bosses, Yoshitsune was the way to go again with his crazy multiple critical hits that will allow you to break through the shields quickly. Fight lasted less than 10 minutes for me (on easy). 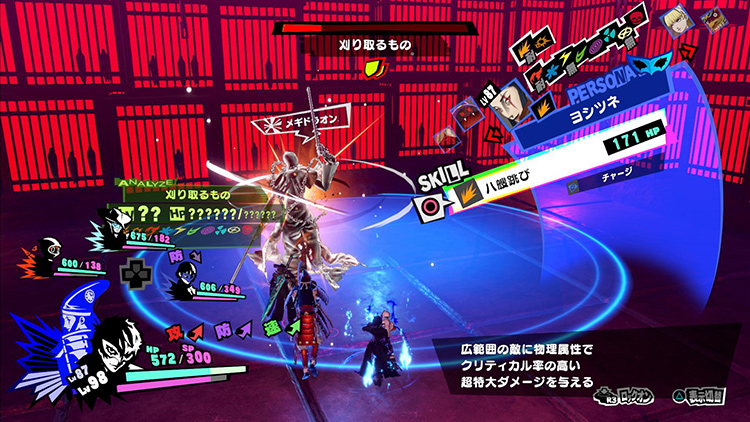 Mask Coinnossuer, No Looking Back

You'll need to be at least level 90 to complete the list since Lucifer is a level 90 fusion. Most of the Personas you'll need can be fused from ones you obtain from defeating enemies in battle while the odd few high level ones will be via requests.

As mentioned above, Lucifer can only be fused in New Game+ so load the "Master" save game and choose to start one. You do not have to play on the new Merciless difficulty and only have to play through the tutorial until you have access to the Velvet Room in Shibuya to perform the fusion. At this point you'll also unlock the "No Looking Back" trophy which only requires you to start the game on Merciless. Nice eh?

Anyway, unlike previous games you will have to pay attention to Persona levels. If the Personas required for fusing are too low, you won't be able to fuse and will have to use Persona Points to level them which can be obtained by erasing Personas you don't need. If you already possess a Persona and you pick up a mask during your fights, that Persona will automatically be converted to PP. 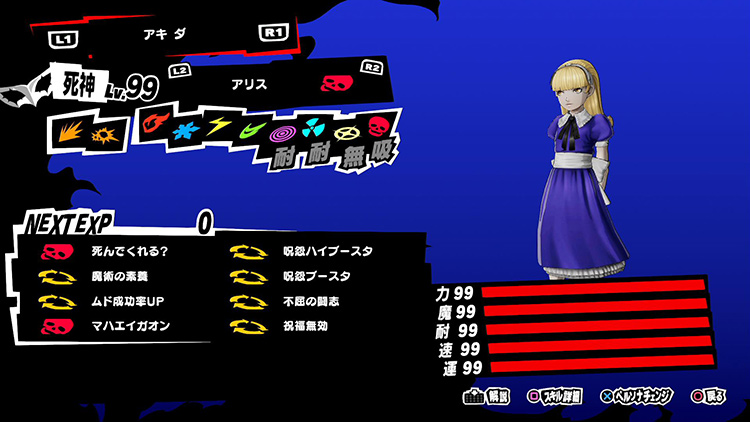 The other way is once you have plenty of money you can just focus on upgrading one (or a few) Persona to 99 (your max level limits this of course) then erase, summon and repeat. You can erase directly from the summoning list so you don't actually have to do it the long winded way by going to your current Persona list to erase.

For the best way to level grind and farm money while you're at it, see the "Eternal Bonds" trophy below. 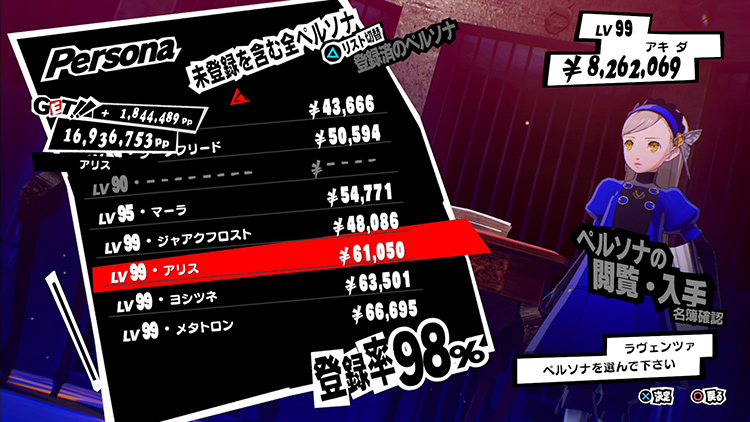 For those who haven't reached or left Osaka yet trying your fortune might be the easiest way to obtain this trophy.

This method will grant you random amounts of Band XP similar to the way Persona 5 increased your confidant ranking points randomly when you went to pray at Meiji Shrine.

Each are repeatable by exiting and returning to the area although I don't know how fast the method is compared to 22,500 XP via Metatron (see below).

Note:
Since you can't travel back to each place you will have to make the most of your time while there or you'll just have to play through again for the next opportunity! 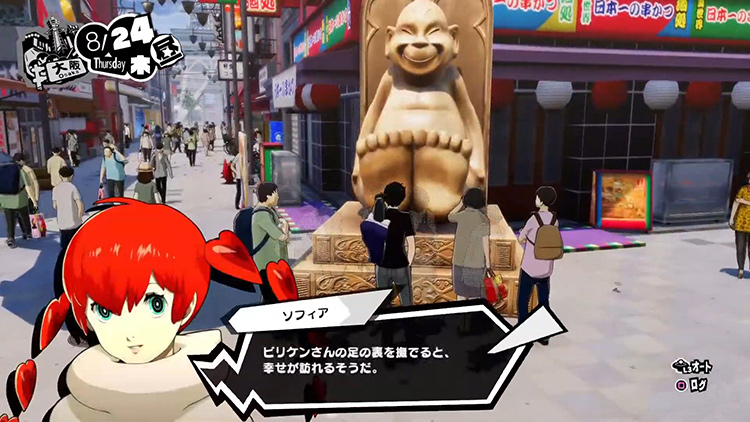 Or if like me you didn't find out about the big grind until you finished the game then this will be the biggest challenge of this platinum trophy as you'll have to XP grind your Band level to 99. The thing is, Band XP is separate from the XP you need for levelling up so you can hit level 99 but your Band level can still be far from being maxed.

I didn't find this out until I had one trophy left which was this one so I thought, might as well go ahead because it's still do-able. 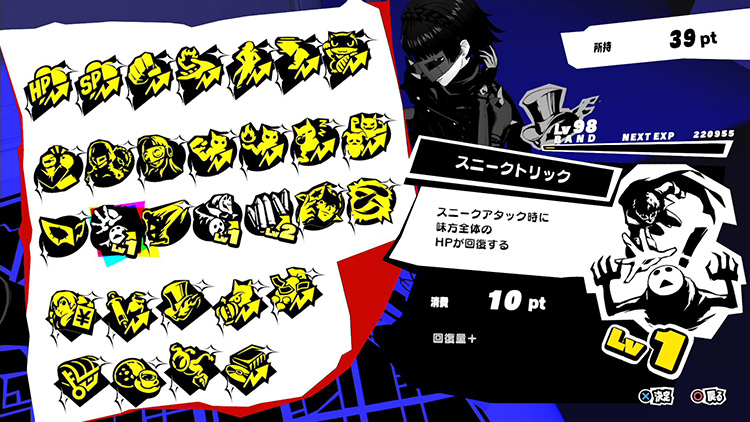 To start off, you can repeat the "An Ebon God Descends" request which you unlock once you reach Osaka. It rewards you with 10K worth of XP and 15K Band XP in less than 5 mins on easy mode, playing as Sophie and spamming her Blessing attacks. 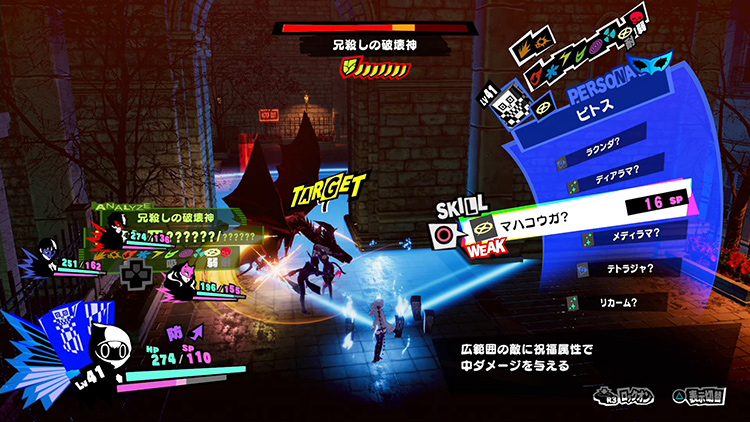 If you fuse Alice it becomes easier as you can take on the quest "Angel of Contracts Descends" which is available after you beat the last story boss.

Defeating Metatron will give you 58,500 Yen and a bit more Band XP, 22.5K so you can get 45K XP every 5 minutes. You simply need to lock on and spam Maeigaon and her Curse Boosts will make quick work of Metatron before he can even hit you with light attacks.

Steps for fusing Alice with recommended skills are as follows (via Kamigame).

You'll have to keep returning to the van to repeat the requests of course.

If you choose to go the Metatron way, it'll take you 10 hours of grinding apparently but I didn't keep count. I just did an hour every now and then.

On the up side this is also good for earning the cash you'll need to complete your Persona list. Be sure to visit Sofie's shop to stock up on ingredients to cook some SP food too because you might want to try a second playthrough on Merciless instead.

Can you stay sane?

The proper way is probably to play through a second time on Merciless difficulty. It's not faster as enemies are much tougher but you'll probably be more sane afterwards.

Trash mobs starts off at level 70s already from the first Jail, Shibuya. Mini bosses can one shot you and your party members even at level 99 if you're not prepared but they do reward you more such as the Band XP you need.

Most people seem to obtain this trophy by the time they reach Osaka by grinding Band XP this way. 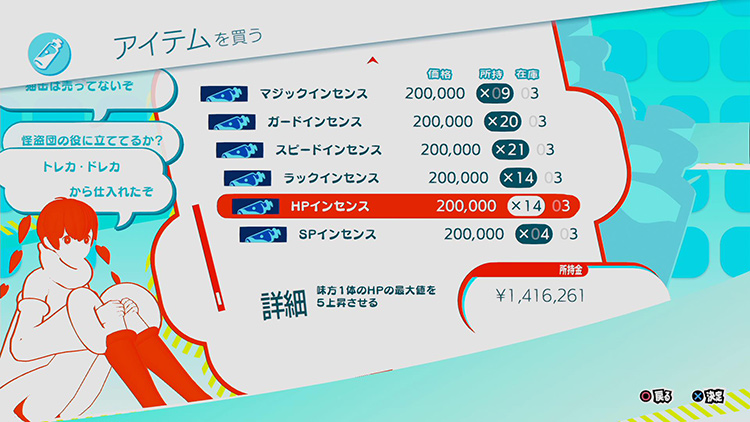 As with most JRPG New Game+, you carry over your levels, items, gear, Persona Points and money. You can only carry over a maximum of 9,999,999 Yen unfortunately which you can easily achieve while farming Metatron.

Before taking on the new difficulty I recommend the following:

New Game+ will let you buy Incense that can boost your party members HP/SP and other Persona stats but at 200,000 per item, each gives you +5 HP/SP. Good news is you should have a few HP/SP Incense from requests or Metatron dropping them although very rare. 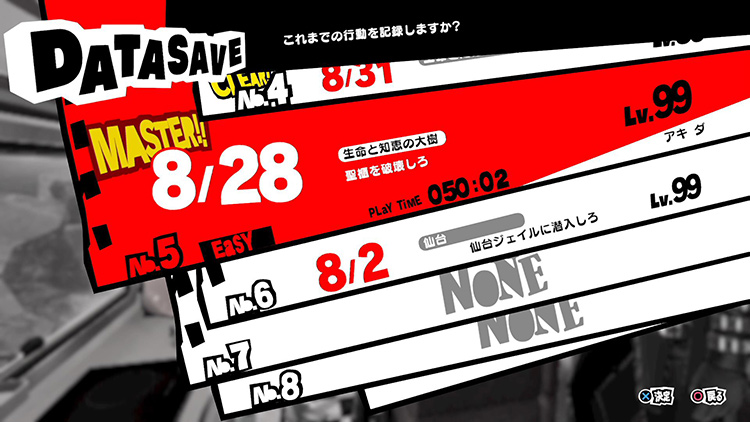 Well, whatever way you choose, hope this guide helps! 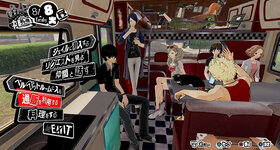