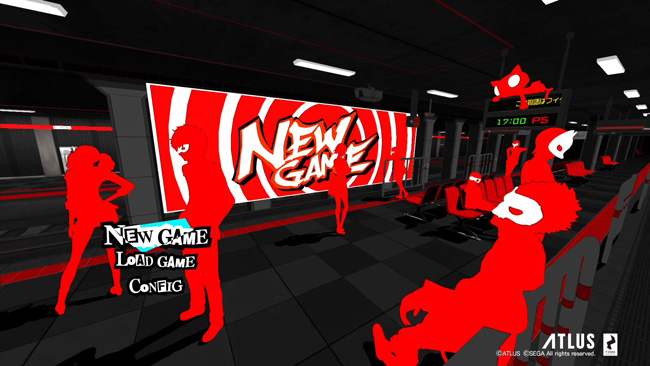 Atlus' Persona series has been receiving great success both overseas and in Japan since they changed the gameplay with Persona 3. After a series of Persona 4 spin-offs and Atlus being being acquired by Sega, we finally have a proper new much anticipated entry in the series, Persona 5. 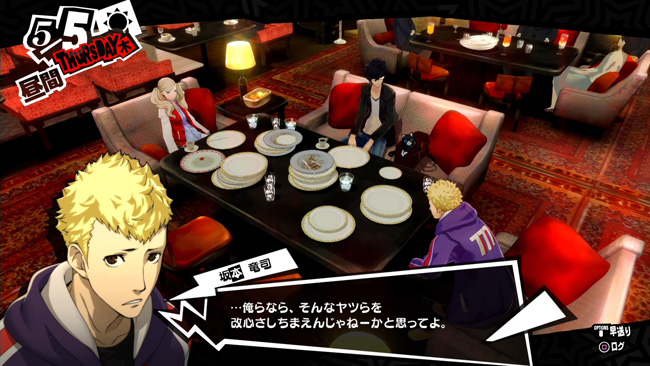 So the protagonist is another high school student as usual. He tried to intervene when a women is sexually harassed by man. Not knowing he was very influential, he accidentally knocks the man over and because of that, gets framed and kicked out of school. When he transfers school and lives with a friend, a strange app appears on his phone and he given the power to change the hearts of evil doing grown-ups around Shibuya by "stealing" their twisted hearts.

Unfortunately, you can't play as a female heroine even though fans had petitioned for it way back in 2008 before this game was even revealed. Granted we all knew there would be a new Persona game but, Atlus didn't quite listen to their fans, huh? 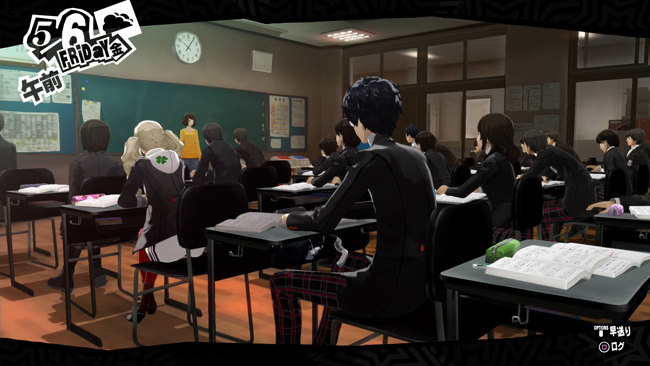 For the most part, game flow is fairly much the same as previous games which is a good thing since this is pretty much how Atlus hit the gold mine with the Persona franchise. You have a limited amount of time to defeat a dungeon boss and as days pass by, you choose how to spend it whether it's dungeon crawling, hanging out with characters or self-improving to make more friends.

P5 actually starts off quite slow. Rather than throw you straight into a full sized dungeon right away like prequels, there's a lot of dialogue to get through and the forced tutorial (whether you've played P3/4 or not) is spanned out across the first one before things pick up again. Personally, I'd like an option to skip tutorials or at least only show the tutorials for parts that are new only. 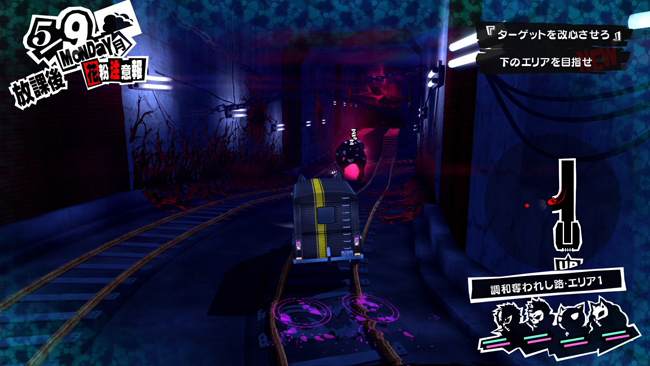 Instead of a single dungeon you've actually got two dungeons to explore this time - one's like P3's Tartarus where you just explore a randomly generated dungeon to fulfil side quests while the other is themed and story based. 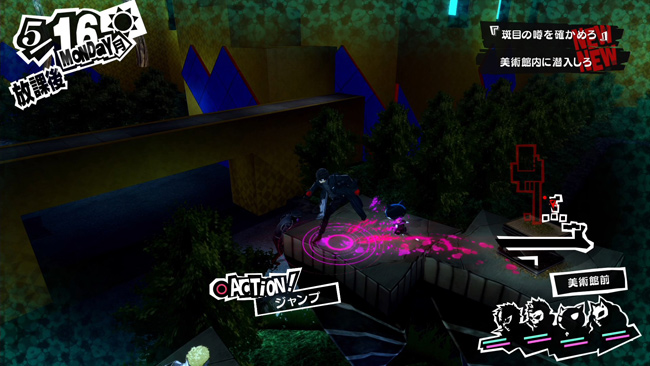 Since you're supposed to be phantom thieves, P5 encourages you to sneak behind enemies in the story based dungeons or you'll raise the alarm and more enemies appear. This small bit of added stealth might feel kind of slow if you're used to just running away from Shadows until you hit the next save point. 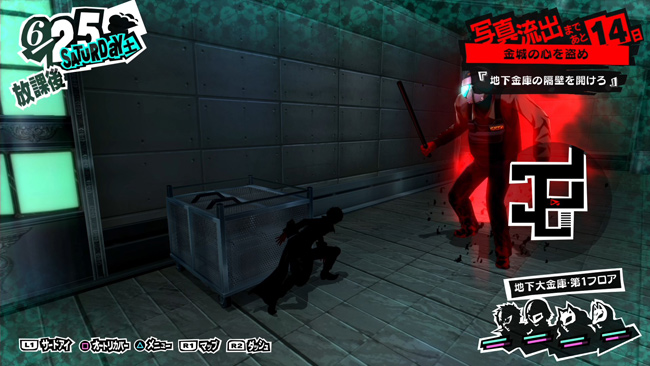 And if you've played other stealth games like the early Splinter Cell games, you'll probably find the controls a bit lacking. You can only control the next spot you dash to by shifting the camera and it can be quite frustrating trying to point to the correct spot using the limited angles. Sometimes you can accidentally shift your character to the wrong side of a surface. Thankfully, the enemies aren't that sensitive - in fact, as long as you're in "hiding mode" you can be right in front of them and they still won't see you!

Then you've also have a "Third Eye" that lets you find what objects/people can be interacted with to help you solve puzzles. One thing I like is how they give you an option to jump right to the point where you started a puzzle or just trawl your way back once you've solved a puzzle such as unlocking a gate. It's a huge time saver because some of the dungeons are puzzles can be very long! 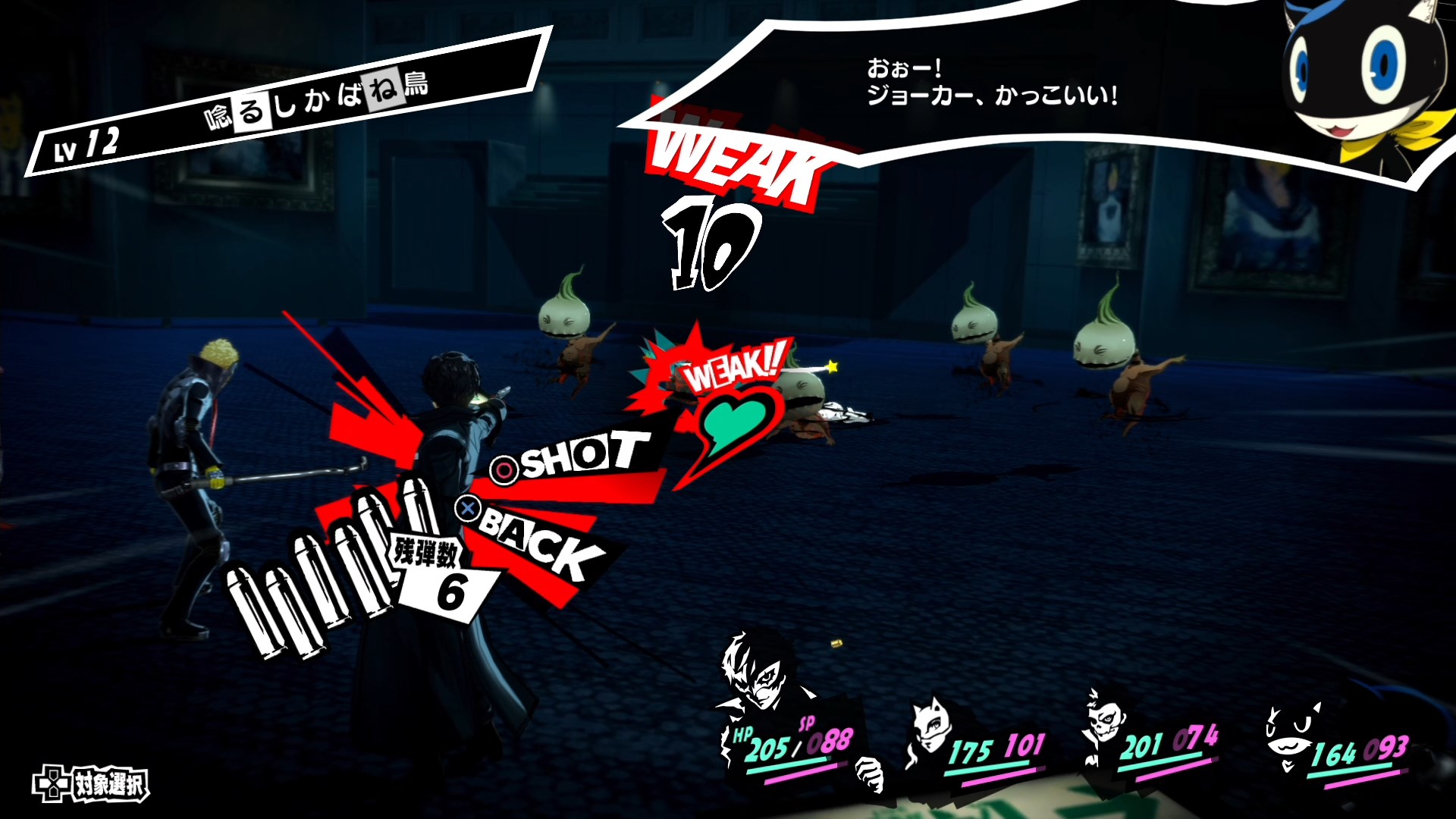 Battle system is mostly similar to previous titles where you're still mainly exploiting the Shadows weaknesses but with some fresh elements. You can now equip long ranged weapons as secondary weapons like guns so that adds a new weakness to guess. However, most of the time I found myself just re-using weaknesses I know from playing previous games so, it doesn't add that much depth. 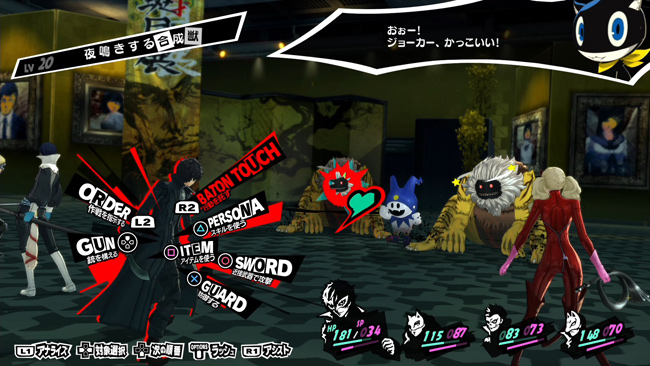 Once you've gotten to know your team members better via "Co-op Links" your party members become more helpful in battles as before but, now you can also tag them when you're exploiting Shadow's weaknesses. Very handy when you don't want to use up all the SP on your own avatar.

There are a few other small but refined change to combat too. Fights have been sped up with an assist feature that automatically selects the right Persona and ability to quickly exploit weaknesses so you don't have to spend time doing that yourself. 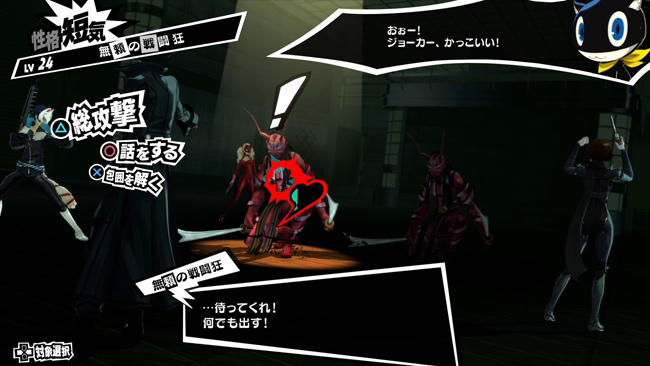 And last but not least, the "negotiation" feature from the Megami Tensei games have been brought over as a "Hold Up". Instead performing an all out attack once all the Shadows are knocked out you can actually chat with the Shadows to either give you items or convince them to join you. It can be quite tricky to get the correct answers but fortunately, sometimes the Shadows beg for their life and it's pretty much guaranteed that they'll join you.

Even the bosses seem to have more thought put into them now. Every one of them have different phases to rather than just the boss at the end of the game which can make it a bit more challenging. 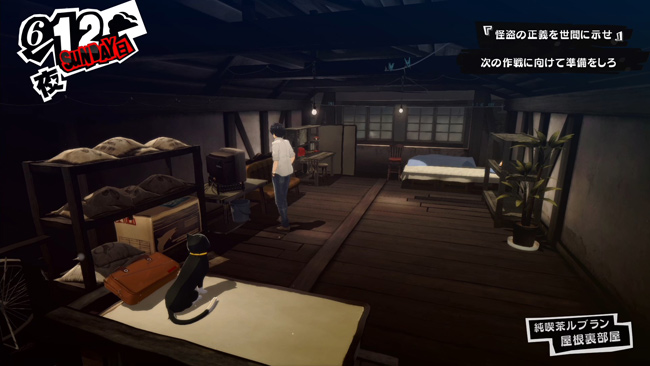 Meanwhile, the game world based around Tokyo's busy Shibuya early on in the game feels a lot bigger than previous games which can be overwhelming.

Just your room alone has a lot of things you can do such as rent out DVDs to watch (yup, no online video streaming yet and complete with late fees!), go to the gym, care for your plant, build items to aid your dungeon crawling, filling in crosswords, answering quiz shows and even washing dirty armour! Lots of choices to level up your social stats! 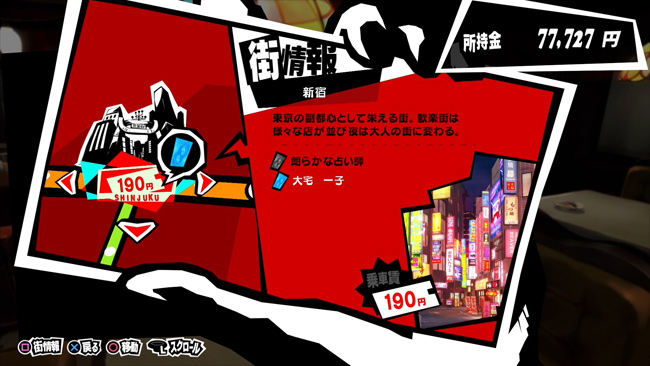 With the increased size of the game world, Atlus seems to have done away with school club activities. While in the last two games you spent a lot of time meeting your social links in school the co-op links are spread out all over the city. Fortunately the fast travel system shows you exactly where all the social links are on the map and even whether you're about to rank up or not.

Right from the title screen the latest Persona title is oozing quality. Everything is very well presented - not even the loading screens escape a touch of creativity. They're all different depending on what you do which is a welcome change compared to just staring a recycled tips. 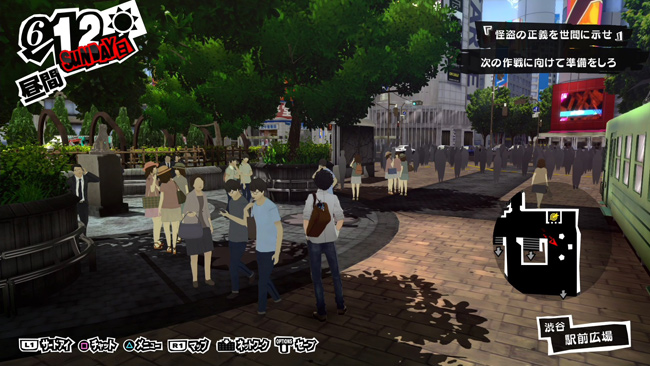 P5 also does a fairly good job of modelling the different cities around Tokyo and if you've been keeping an eye on P5 coverage you'll find people posting the real world locations some of the places are based on.

Game even gives you the option to switch trains yourself like finding the Ginza Line and if you've been to Japan, the hustle and bustle of Shibuya is quite authentically represented. Anyone who hasn't been will have a feel of the atmosphere. Thankfully it doesn't make you do it everytime or it would be laborious. It also makes you wonder if Atlus did this to appeal to the foreign gamer or perhaps just native Japanese living outside the big city. 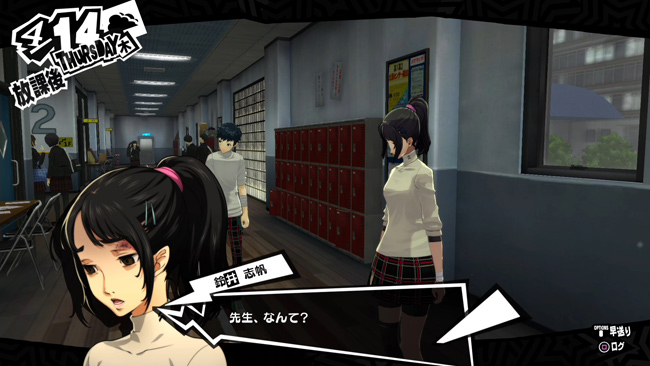 However, if you couldn't tell already from the screenshots it's also a very dark game with violence and sexual harassment right off the bat in contrast to the last game where it was a bright yellow, tranquil countryside. It's pretty much Atlus pointing at all the corruption and wrong doing present in society.

Then you have the cast ripping off their masks to summon Personas with a blood rolling down their forehead and Persona fusions occur by being beheaded... Guess the black and red colour theme is a good choice.

It's kind of close to going back to its roots, the Megami Tensei games which are well known for their horrific, dark themes and scenarios. 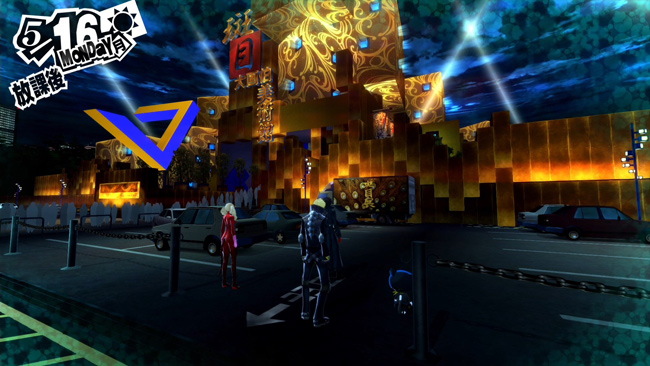 Dungeons are creatively designed to match the twisted characters they're supposed to represent and in-game cutscenes are very cinematic. Then there's the mix of the good old CGI animated ones that feel very high quality as expected from Production IG (who made Ghost in The Shell, Psycho Pass, Attack on Titan etc.) too. Everything looks sharp and high quality on the PS4, not just a cheap filter.

Not everything's perfect of course. 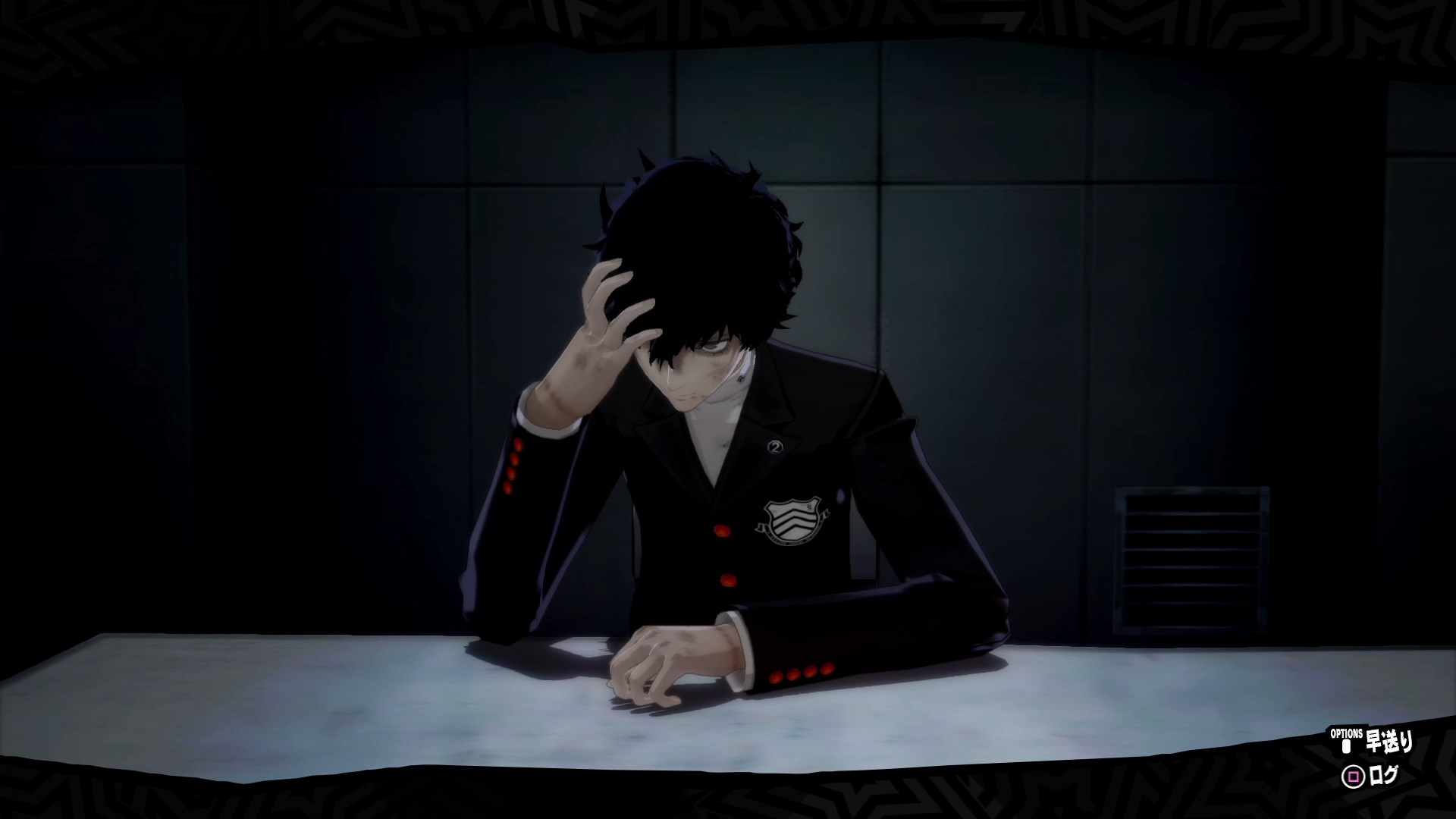 As you progress through the story or gain new Coop Links, the frequent flash backs to the present where the protagonist is being interrogated can be quite annoying. Atlus can also try to be too cool at times such as the XP screens. Watching the gang run as you read through the end of the battle results is cool at first but as with all pretty and cool things, it gets boring once you've seen it a few hundred times. 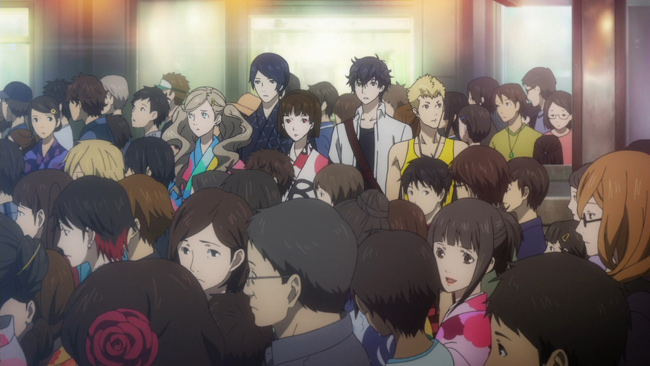 If you're used to watching subbed Anime, you'll recognise a lot of familiar voices like Ikue Otani as Morgana the cat who actually ends up with similar lines as her Chopper role from One Piece. Then there's the reknown voice actor singer Mizuki Nana as the foreign student, Anne and Mamoru Miyano as Ryuuji who played as young gangster Masaomi Kida from Durarara. A solid cast of voice actors.

Music is once again by Shoji Meguro so you'd probably recognise his style in a lot of the tracks. Unlike P3/4 however, the tracks feel less vocal this time round but still blend in well with the atmosphere. 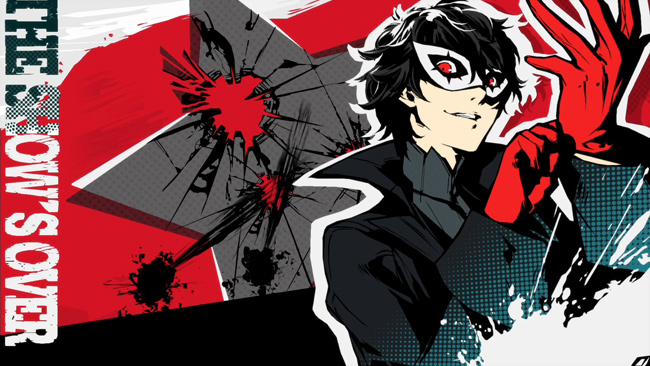 Overall, Persona 5 is another top quality title in the series that maintains high quality in both its presentation and gameplay. I usually get bored by the third game in franchises (they didn't change the gameplay until P3 after all) because either everything is too similar but I enjoyed Persona 5 a lot - barring the stealth parts thanks to its horrible controls. As long as you don't mind the dark themed scenarios and the new stealth element, I'm sure you'll enjoy this latest instalment very much.

I had a video I put together that I spent time subbing but unfortunately I was one of the unlucky ones that got reported and Atlus executed their copyright over all game footage and screenshots from the game. I'm guessing it's one of the people who ripped off my video and got annoyed when I complained to them via their comments section =/ 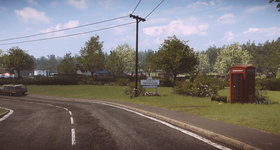 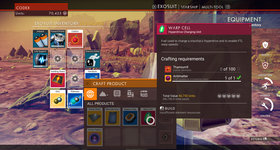