After all the spin-offs it's good to see the story pick-up from the original game (not Royal with the new female member unfortunately).

Otherwise known as Persona 5: Scramble in Japan, the story picks up 6 months after the events of the original Persona 5 as the gang decides to meet up again and go camping together for the summer holidays. However, when the protagonist meets up with Ryuji the next day and searches with the popular AI app "Emma", they suddenly find themselves back in a world similar to the Palace. Not only that, along the way they discover another AI named "Sofia" with a case of amnesia. All she remembers is to "become a good friend".

The gang decides to postpone their summer plans as they must find out why this new "Jail" world is appearing. They soon discover when "wishes" are stolen from people's Shadows, it is almost like losing their "treasure" causing their personality to change.

Meanwhile, many politicians have been suspected of becoming "change of heart" victims and our Phantom Thieves are suspected of being the cause. However, after learning of their secret Shadow world, they are offered info to travel around Japan to scout out other Jails. Now they must set out on a road trip to stop the ones handing out keywords, luring people into their Jail and in the process, they find themselves reminded of their own difficult pasts. 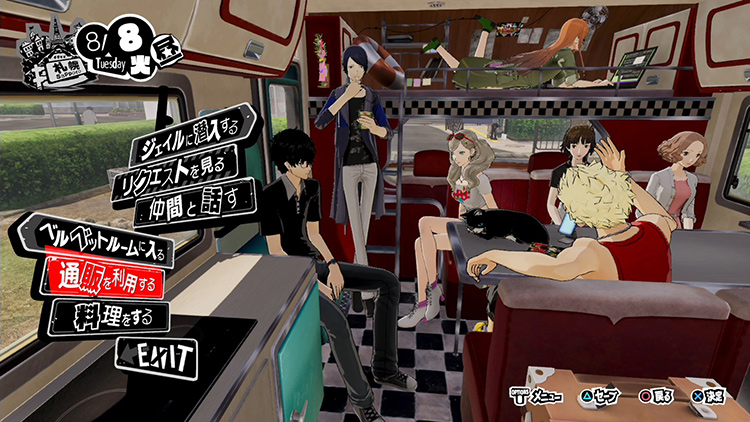 If you've played Persona 5/R and still have the saved files on your console then you get to change the battle theme to the original game.

Developed by W-Omega best known for their Warrior/Musou action games where you're a one man army, the fighting is pretty smooth. You have a lot of features that remind you of the Persona franchise such as exploiting weaknesses by summoning different Personas to unleash skills and All Out Attacks. Your party members are mainly AI controlled but you can switch between party members any time. I also like how this time you can swap skills in and out so that you're not forced to forget a move forever now.

As the Musou games are mostly slash fests it's good to see they went out of their way to make it as much of a Persona game as possible; in this case more Phantom Thief themed. You can still sneak around and perform sneak attacks but also make use of the environment such as cutting down platforms or blowing up cars to attack the enemy. Often you'll find yourself having to fend off enemies while Futaba hacks something too. 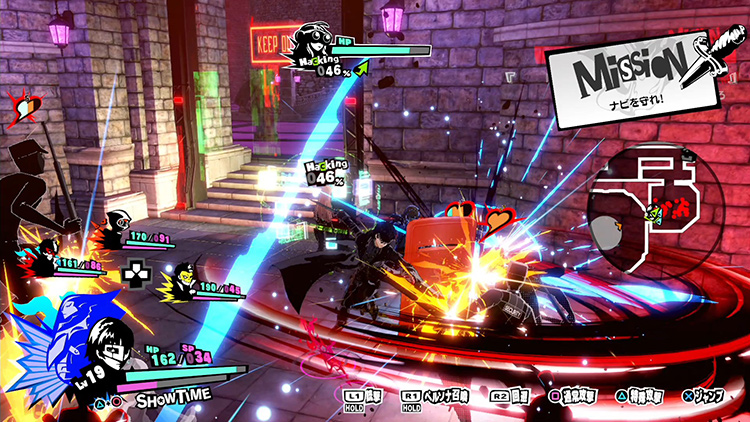 Flow of the game is pretty similar. There's a Jail where you must beat the boss although instead of ranking up confidants, you fill out a "Band" stamp card that lets you earn stat and skill bonuses instead. Third Eye also makes a return to help you look for secrets and hidden objects to help you along the adventure.

In the original game, you simply had to reach the end of the Palace to find their Treasure before you can fight the boss. Here, there's an extra step where you explore the locations to dig up some more info to ascertain your target. Fortunately it's not too hard as the spots you need to scout are all right next to the rest of gang. Then you can run through the Jail to find the boss and it's pretty much the same from there; Phantom Thieves dish out a warning and you're ready to return and fight the boss. 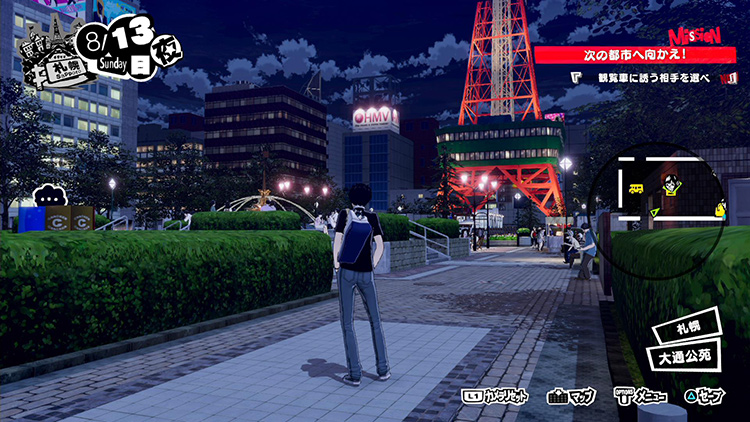 Dungeons themselves look great mostly but running around unlocking the boss by reaching towers gets kind of repetitive during the first few dungeons. It's kind of easy to get lost due to the 3D dungeon and you can find yourself dashing everywhere as you get "stealth" points to dash to and ambush enemies.

If you're not into ARPGs like I am or just find them hard, easy mode is really easy. Almost 1 hit KO on all enemies if you perform sneak attacks so you can still play to enjoy the story. I think Atlus took into consideration that a lot of players will be coming from a non-ARPG fan base.

There aren't any confidants to hang out with and even when you decide to leave a dungeon there's little banter to be had with your party members unfortunately which was part of the fun in the RPG. On the bright side the dialogue is still fun when it lets you take a breather after a dungeon and maybe the odd special event.

You can now collect recipes, buy ingredients and cook your own items at the camper van base too. You'll probably find yourself doing this a lot because the SP recovery items are so hard to come by. Not quite as fun as in other RPGs that let you do this since the number of recipes are extremely limited and there's no nice food art to accompany them like say in Vanillaware games. 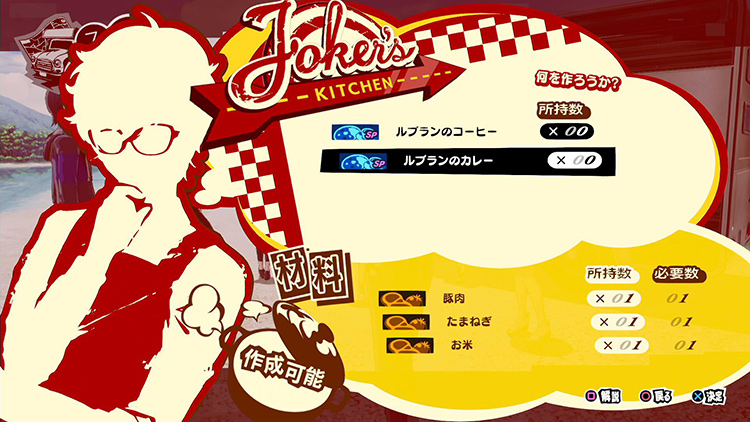 You could probably call it a dose of nostalgia for Persona 5 fans since it's been almost 4 years after the original game's release. You get to explore familiar locations around Tokyo such as Shibuya but after that, you're travelling to cities outside the capital and it's a fun sight seeing road trip. Maybe it'll inspire you to go to them on your trip to Japan or even remind you of your trip there.

Both audio and visuals have a similar vibe as before but you can see Atlus tried to put extra effort in to make it stand out as its own game. Menu animations feature the characters but maybe a little over the top. It's still got some great ambient audio tracks just like the original game. 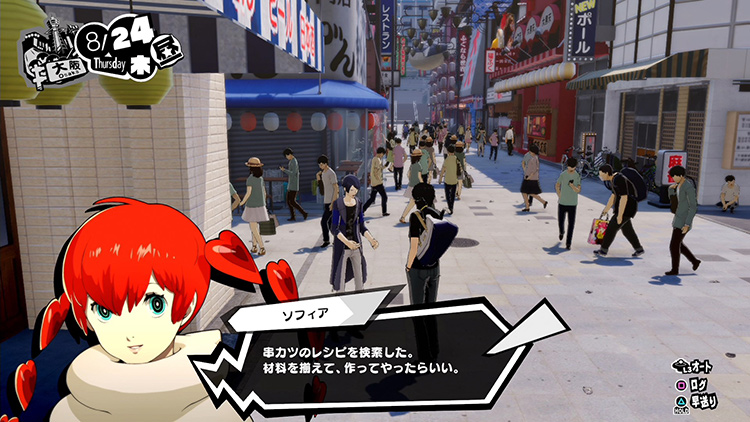 It's also interesting that this got a release on the Switch. After trying both versions of the demo, the Switch version seems to have longer loading times even though it's on flash media while my PS4 has a hybrid HDD. Videos are also heavier compressed on the Switch making them look blurry and graphics are generally less sharper on the Switch even on TV mode. You'll notice character portraits are more blurred and there are more jaggies on character models which is probably due to space issues on the cartridge and dropping the level of antialiasing would help with the number of models the Switch has to handle. In other words, PS4 (or even PC) would be the best experience IMO.

Either way, it's good to see the gang again even though it's not Royal it picks up from (maybe DLC or Strikers Royal?). You can tell the team has put a lot of effort in to make a Musou/Warriors game not so Musou and make it easy to play for non ARPG players. Another wholesome journey of friendship and acceptance with a virtual tour of Japan's main cities.

Persona 5 fans will definitely enjoy this but if you're still on the fence, you can always try out the demo. 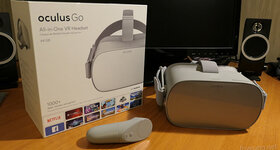