Robot technology has reached the stage where they're capable of virtually performing any task that a human can do and are now used to serve or work in various parts of the industry. However, recently there have been reports where such androids have turned into a "deviant", running away from their master or worse - killing them. Now CyberLife the company responsible for manufacturing them has created a specialised android named "Connor" (reference to Terminator?) to investigate the cause of such incidents. Meanwhile Kara, a housemaid android had also turned deviant, running away with a little human girl named Alice to protect her from an abusive father. Markus, another android framed for causing the death of his own master was scrapped and now, must decide how he must continue to exist as an android. 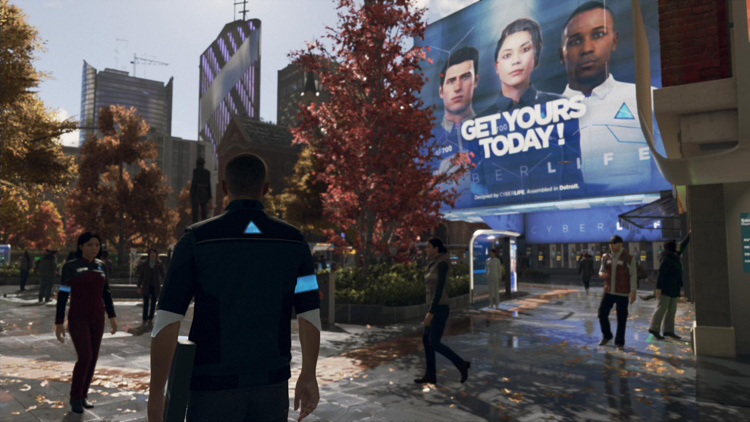 For those of you who have never played a Quantic Dream game, it's been called the "interactive movie" series because you basically play as the main characters, finding things to do and making decisions. You do this by walking around a place until you see some controller cues you follow. Or if there's a reaction based scene (QTE, Quick Time Event) you have to execute the controls as quickly as possible (and they can be quite intense in this latest game). And of course the main selling point is that all your actions changes the way the story progresses including if your action resulted in the death of a character. You can get a good feel of the game if you download the demo that lets you play through the first chapter of the game as Connor.

There's quite a lot of criticism on the control system but I think it's actually the best approach if you want to appeal to casual gamers who don't want to or have trouble remembering button assignments. 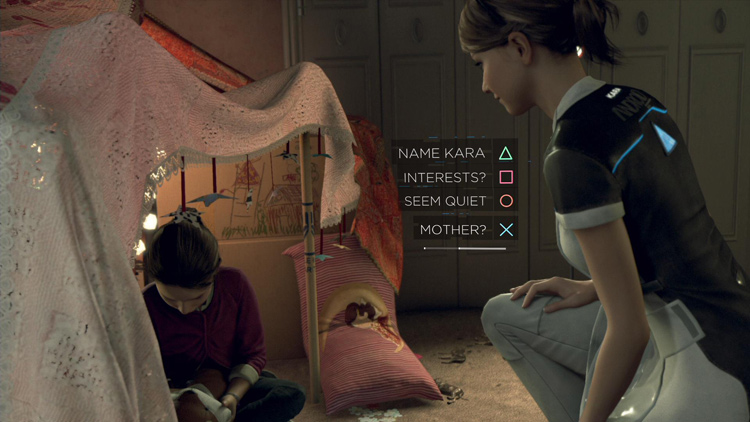 In the past titles you had to spend a lot of your time finding what you could interact witih which, isn't much different from early adventure games on the PC where you had to click around everywhere with the mouse to find something. Detroit: Become Human kind of helps minimise this by allowing you to scan the place you're in and objects you can interact with are marked.

However, this isn't always the case. Sometimes you are pressured to take action quickly with a timer ticking down and there won't be enough markers around so you don't have enough time to find out whether the result you want to achieve is achievable or not. I understand they want to make you feel some kind of urgency during desperate situations but, it can also be quite frustrating when something you could have done couldn't be done because you don't know how to trigger that action.

QD's kind of improved their games in this area by letting you pause the timer while in scanning mode, showing how much time you have left. Yet, sometimes you don't know if you can interact with a single or multiple objects each time so it still doesn't help much and you can be tempted to replay the scene or chapter anyway. 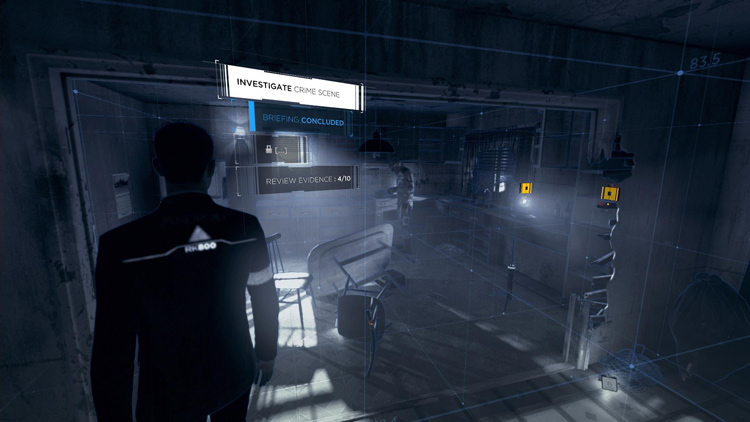 In some cases hiding the markers make sense such as when you need to find someone who might be hiding somewhere but others, it's not quite so helpful. For example (without spoiling too much hopefully) at one point you're expecting to steal something from a shop and you have to distract the shop keeper so that you don't get caught. The odd thing was that you're restricted to what you can steal after you create the distraction which just didn't make sense.

There are also the odd time where the single word choices during dialogues make it too vague to let you know what you're going to say next. 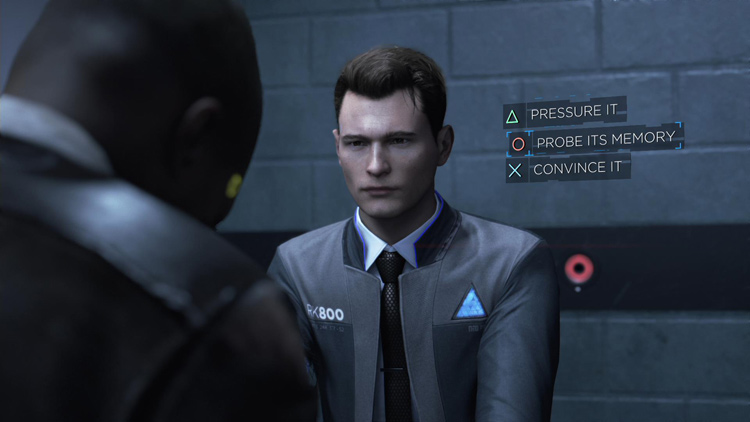 The main selling point of Quantic Dream's games is the multi-branching story and it's great to see what other players did as if you're watching the story together but, it doesn't make it easy to try out the different solutions. Checkpoints in the game let you return to a certain point in a chapter but they are very far apart and forces you have to re-watch (sometimes) long lengthy cutscenes. It would be great if you could just jump straight to a branching point, restart a QTE or at least add a fast forward button. A lot of Japanese visual novels and even JRPGs such as Persona 5 allow you to hold a button to fast forward story scenes - some even letting you skip only ones you've watched.

New with Detroit is you can examine objects in more detail to gather evidence and re-construct crime scenes, replay them and then unlock new objects or options to work with. At one point you can also "pre-process" plans by working out a route before performing an action by scanning possible points in an area you can move between. Both look cool and really add to the sci-fi nature of the game. 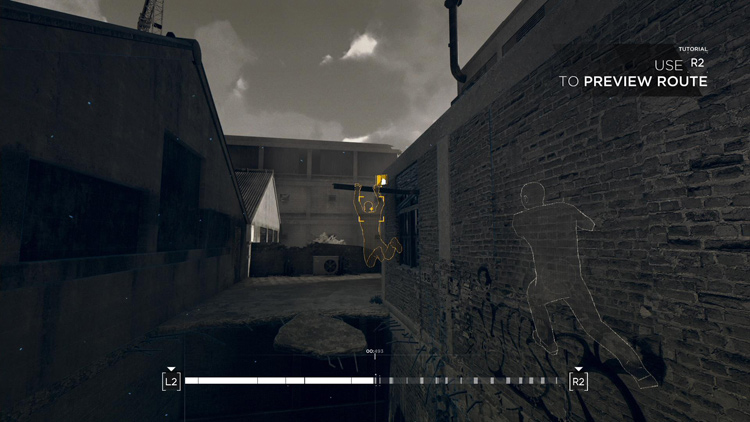 Heavy Rain on the PS3 was known for its "uncanny valley" of realistic looking humans models and animations that were yet still slightly off. I think they've since improved quite a lot with Detroit even though the expressions can look off sometimes - mostly on the androids when they smile which might have been deliberate. You'd probably notice this a lot with Chloe, the female android that greets you at the title screen.

Speaking of the title screen (as creepy as it might be sometimes) her greeting even changes depending on the time of day you're starting the game or how far you are. Most of the time title screens are dull in Western games with Japanese games being more creative but, I think Detroit just might have topped the creativity here, 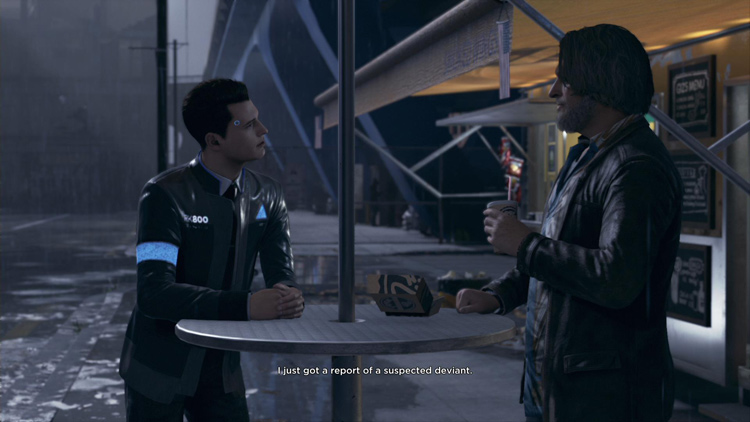 Otherwise the world setting looks amazing to look at and looks better than Channel 4's "Humans" drama because the world is filled with just the right amount of hi-tech. There's no flying cars but there is tech that's closer to today's technology such as e-books, AR, video screen ads, self-driving cars and dynamic window displays free of paper which makes it more believable and immersive because it doesn't look like only robot technology's the only area that's advanced and accepted.

I'm not quite sure it's at the level where it's worth the long loading times although a lot of PS4 games such as Final Fantasy XV also suffer from the same problem. The 11GB you have to go through before you can play the game you still have to wait quite a while before restarting or playing a new chapter. 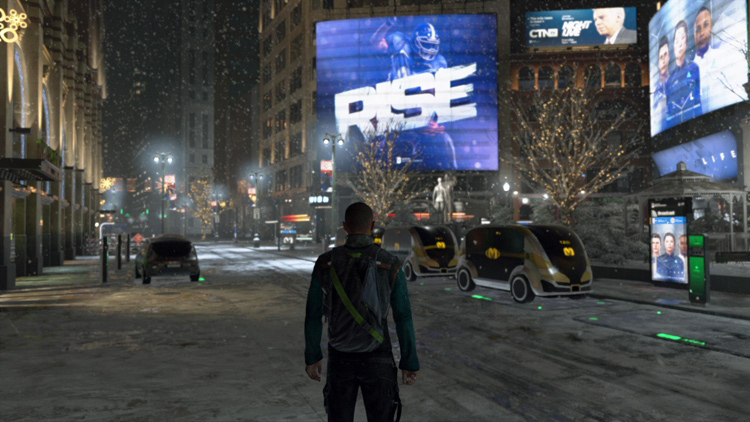 There are quite a lot of dark gloomy moments where it might even resemble a horror game but for the most part, the game is beautiful to look at. Direction for the character development and direction is good even though there are points in the game that lack originality. You also have to wonder why David Cage never took into account Isaac Asimov's famous Three Laws of Robotics that many other robot centric sci-fi titles take after - one of which is "a robot may not injure a human being" although I guess if their behaviour algorithm gets corrupted it wouldn't have made a difference anyway.

Some scenarios feature domestic abuse and also sexual exploitation which have raised some criticism in the press but, you have to wonder why live action movies don't get the same kind of criticism. At many points of the game it makes the player consider whether it would be appropriate to fight violence with violence, verbal abuse with verbal abuse or as they say "an eye for an eye" and experience the consequences. I think someone would be more likely to take action against such problematic real world issues by making them feel responsible for the actions they've decided to take in a video game because, it probably has more emotional impact than being a passive viewer of a live action movie. Try the demo and you'd see what I mean.

I enjoyed Detroit: Become Human for its sci-fi setting and characters. It's probably Quantic Dream's best title yet. If they can keep the immersive world setting, great characters and continue refining the way situations can be approached then, I think their next title could be even better. 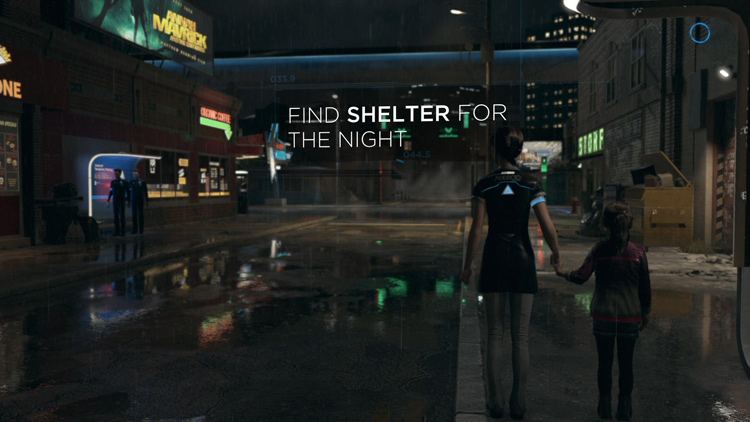 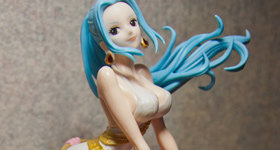 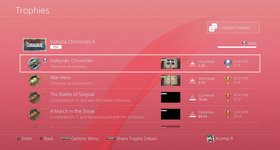 Not long ago I reviewed Valkyria Chronicles 4, the latest and long awaited new...