So 10 years in the making, Final Fantasy XV is finally out. SE's latest release which will hopefully restore faith in their fanbase after FFXIII didn't go so well with fans. The delay doesn't quite stop there since on the PS4 version there's an additional 9.5GB patch to download on top of a 50GB install before you can actually start the game but, that's not much compared to the 10 year wait for some fans and since we now have broadband. 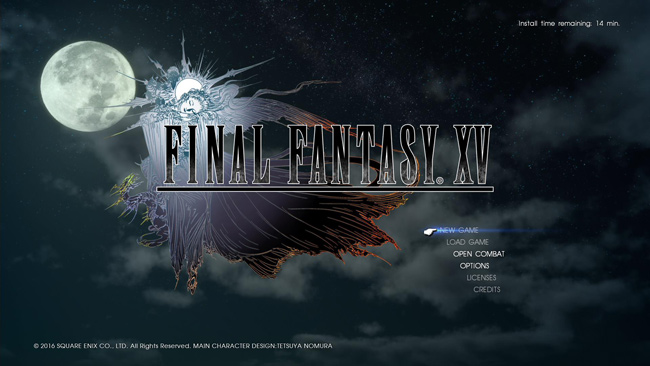 In FFXV, the Empire has taken over with its Magitek army and with it comes dark times. Now Luna, a descendant from the bloodline of Oracles is claiming the powers of gods to help claim it back. Meanwhile her childhood friend and next in-line prince, Noct makes his way back from his roadtrip trying to catch up with her hoping to stop the menacing evil together and lighten her burden.

Gone is the turn based battle system now replaced by an action system not unlike the one Lightning Return used. All actions happen in real time now but it's not very fluid... 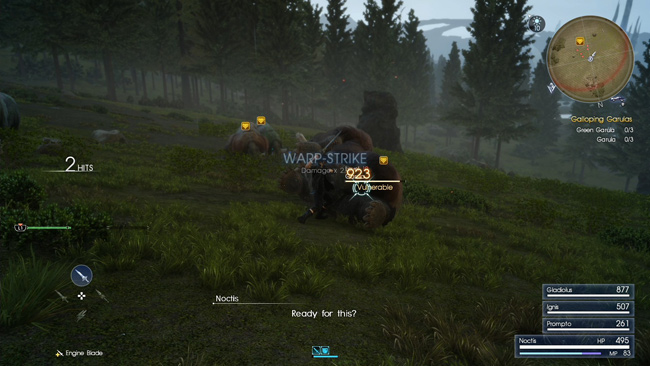 Lock on system doesn't work that great. You lock onto an enemy then you can warp in to perform a powerful chain attack and command your AI party members to perform moves as a gauge builds up. It kind of works and kind of doesn't because a lot of times you take on more than one enemy at once and despite the slow motion with cues to hit the right button, it's hard to know when you need to dodge so, most of the time it's more like a brawl, just hitting whoever you can.

You can switch to "wait" mode in options but the system feels very out of place in the action oriented game. Like pausing a video then hitting play repeatedly.

It's horrible until you learn to perform the usual hit and run tactics that a lot of action games expect you to use. Kind of like "tanking" where you distract the enemy and let your AI party members do the attacking. 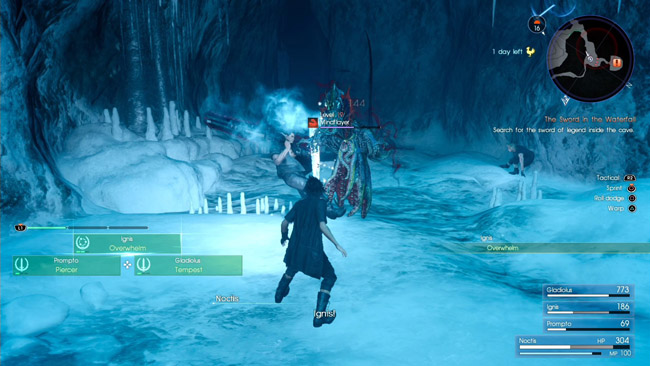 Speaking of AI, there's little control over your AI members other than telling them to use a special attack. So when you throw magical grenades (only way magic works in this game and miss the fancy spell effects), they run into them like idiots...

Levelling up mechanic has also been revamped. Rather than level up right after a battle, XP and AP is pooled until you find a place to rest. Then you can level up and spend the AP on unlocking new skills.

There's also a weird change to the way HP works. As you battle enemies, you will get hit and once the HP drops to 0 you're in "danger" critical mode where you can't do anything until you use a potion. While you're in critical condition, any HP lost becomes your new max HP which can be tough when in long dungeons because the only way you can restore the max HP is to go camp/sleep somewhere for the night or use elixirs which thankfully, aren't rare any more and can be picked up from shops.

It's quite a good change since it ups the tension before you enter a dungeon because there aren't any save points so you have to be prepared with items before heading in. 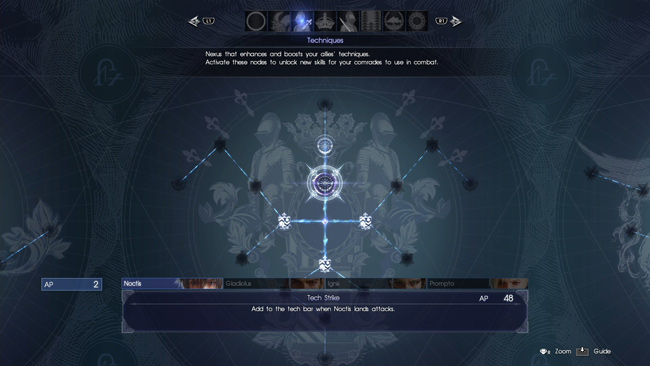 Gone are the old ways of summoning. They are pretty much preset for certain battles.

Other than just fighting, there's a mix of other elements like walking through a tomb that feels something like along the lines of Resident Evil survival horror or, stealth sneaking your way through a very nasty looking giant Behemoth. Unfortunately, these kind of directions gets ruined since you can easily defeat the monsters when they appear which makes you wonder, what's the point of all the sneaking?

Sneaking also isn't very intuitive either. It's more like a trial and error game because it doesn't give you any hints about what you can do such as showing you spots that are visible to the enemy - a game's camera is too limited to show you what spots are safe.

It feels like they're back to toying with ideas like when they released all the FFXIII spin-offs to see what works. 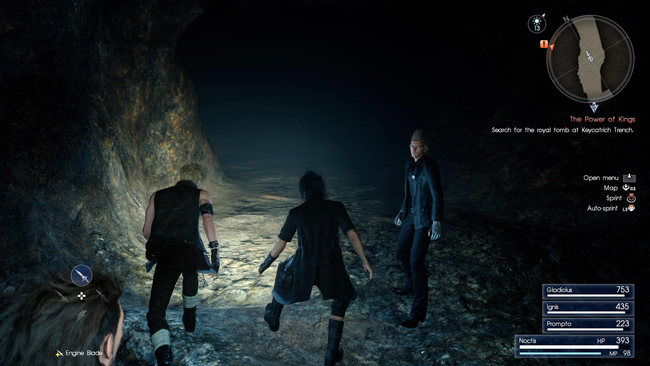 FFXV isn't without its fair share of bugs despite the heavy day one patch as you'll find on social networks - mostly badly rendered photos although I've yet to run into any of them. One bug I find quite funny is when you try to hit confirm to talk to interact with something, you end up jumping most of the time.

It's a huge open world which breaks the tradition of the closed ones FF titles have been restricted to so far. You can take on high level enemies that are well beyond your limit if you wanted to. You can eat food for buffs (and the food looks mouthwatering) and Ignis the resident chef will learn the recipes and cook you up as long as you have the ingredients. 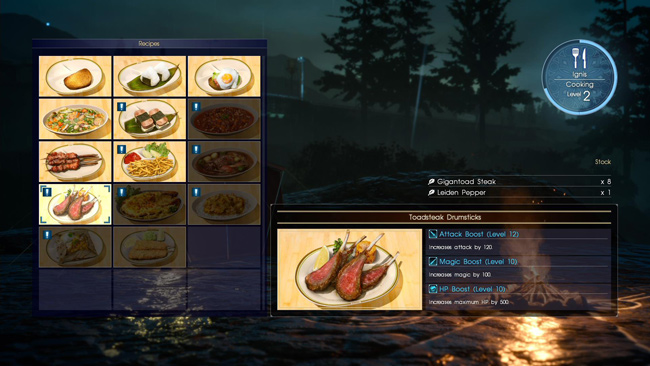 However, driving around is like holding the move button and the car moves on a track which isn't a bad thing since there's less to learn and you can just literally sit back and enjoy the ride.

There's a lot of driving around and unfortunately, the banter leaves a quite a bit to be desired. Sometimes there just isn't enough banter compared to say something like Bioware's Dragon Age series.

Fortunately, they haven't left out fast travel which is pretty much a must in RPGs with huge worlds and here it comes in the form of parking spots. 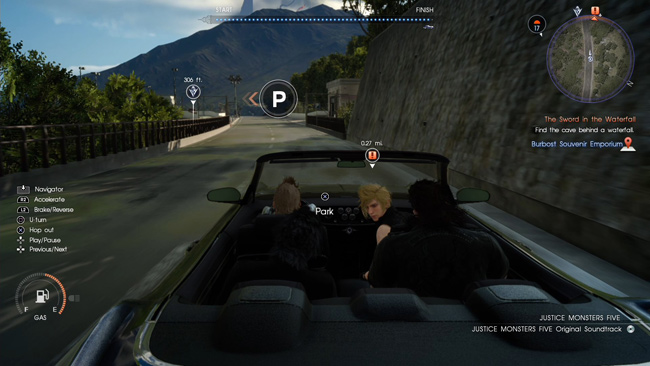 It kind of taking get used to because it's quite a change... From your cartoony visuals and being transported to a turn based battle stage, SE tries to re-present all the characters so that it's like what would happen if they appeared in real life?

There's a bit of decision making too which doesn't really affect the story but gives you a side event to watch. It kind of hints SE is trying to follow the trend of building up bonds with characters. I think enough Japanese game companies have seen the success of Atlus' Persona games and are starting to follow on such as Falcom's most recent Trails of Cold Steel so SE just might be toying with the idea. 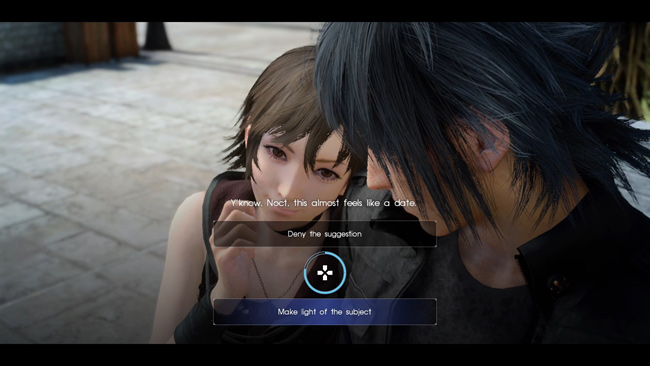 If you've watched the Kingsglaive or the Brotherhood Anime you'll have a rough idea of what's going on. Otherwise, the story direction is so bad you'll probably have no idea what's supposed to be happening most of the time...

CGI is amazing and probably sets the new benchmark and expectations for their games. So good that even SE thinks so too and gives you chance to take pictures with photo spots. Problem is, you do feel the game was rushed last minute because other than the lack of the usual cutscenes, you'll see quite a few cut out from the Kingsglaive movie like they didn't have time to finish the story off.

Quite a long loading time but worth it. Can take up to 5 minutes on my PS4 despite the initial long install - not sure if it's better on the PS4 Pro. 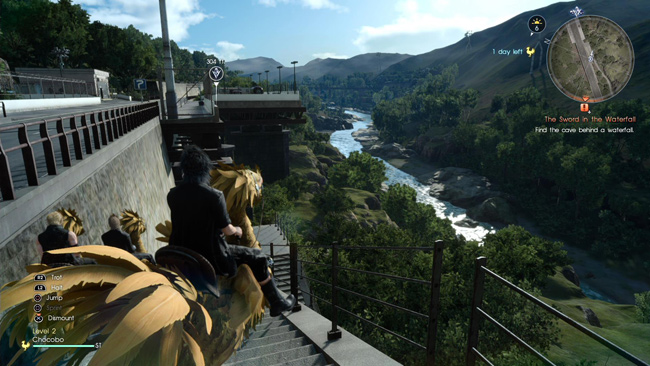 However, it's simply too life-like and most of the game looks straight out of an American movie with vast roads and plains. Now, to the Western audience Eastern countries have always been exotic and vice-versa so perhaps that's why SE decided to go with an American setting - living and adventuring in America is pretty much as much a fantasy to Eastern people as it can be said of Westerners traveling east for holidays. So I guess the American-esque setting can be understood from that viewpoint.

You could say it's like the mundane world settings of Western RPGs brought into the FF games now. I've nothing against European/American scenery - they look great and exotic, true of their origin but when you've seen them in nearly every Western game you play already, it's boring. Having creative, original new world settings has been the charm of FF games and JRPGs. 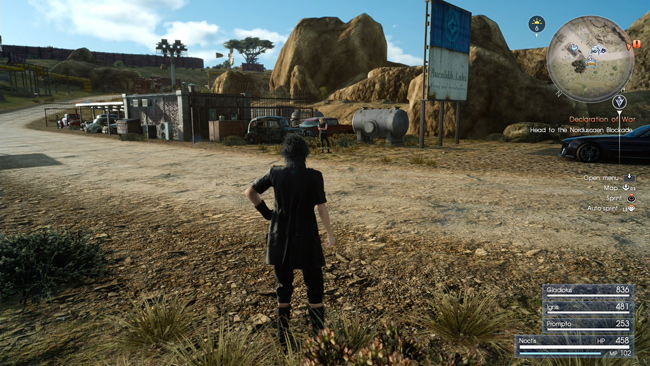 Even with the almighty ring, it seems Lord of The Rings had a big influence on the story. There's clearly a lot of Western influence which might be what SE is trying to achieve considering how a lot of Western titles have managed to top Japanese gaming charts lately.

While in older FF games including XIII, locations were all creatively coming from the imagination. Kind of lost its old charm in a way. 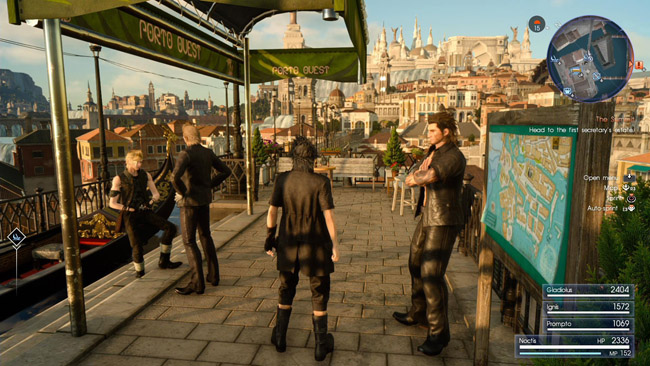 It's a marvel to look at. It's like the artists painstakingly went through every FF enemy and carefully thought of what they would look like and behave in real life. The in-game graphics look even better than AC with more detailed textures. For example, there's one side quest where you need to hunt down a Behemoth and as any FF fan will know, it's a huge tough beast to take down and the way SE manages to present it in the game was astounding! Kind of makes up for the missing spells.

All the familiar FF enemies are back but made to be life-like as in what they would be like if they appeared in real life.

To me, FFXV takes CGI to the next level but in terms of gameplay I think they've pretty much just put in everything Western games have been doing for decades - overly used world settings, open world and uninteresting battle systems where you just unlock more powerful skills to win. 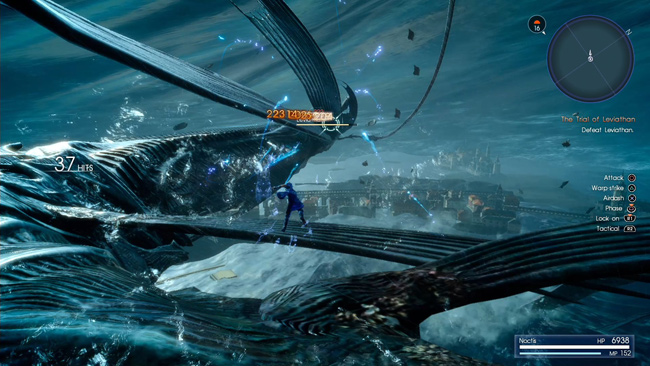 In the end, after failing to impress fans with FFXIII, it feels like SE decided to take the tried and tested formulae of Western games to mish mash them into what you see as Final Fantasy XV. It might be the right move for SE considering how many Western titles have managed to top the Japanese charts lately so by joining in the crowd, they can ensure their success and at the same time, win over Western gamers who don't like JRPGs for their quirkiness.

It's not very exciting if like me, you prefer JRPGs because of their creativity in both presentation and gameplay. The Final Fantasy franchise still seems to be unsure of where it's headed but I think I will stick to the series for its amazing CGI despite losing a lot of its fantasy elements in this latest instalment. On the other hand, I think SE will be picking up a new generation of FF fans.

If SE can sort out the controls and go back to a more creative world setting then, I think FFXVI should be good. Otherwise, I think the FF series will pretty much be going for a new fan base. 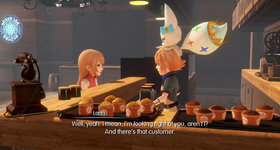 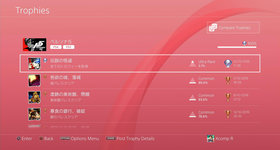