20th June 2013 Update:
The site has now been taken down but you may still read the translations and the rest of the site content in PDF here.

Finally got round to picking up the half done translation. Pretty hard to believe it's been two years since then. Time flies, eh?

If I wasn't a software developer myself it would have been quite tricky translating all the parts about programming. Other than the finished translation, you'll also find I've added Shinkai's Twitter feed to the bottom of the site and also a new guestbook feature! Anyone still remember those? You know, those days of dial-up 56k modems and before social media sites took over, it was a page where you left a little message for the website owner and its visitors.

Anyway, as with the previous stories, it contains a lot of new material - a lot more which should help clear up any questions you may have about the final episode of the movie. You can view a detailed comparison if you can't be bothered reading through the translation. In the afterword of this novel, Shinkai notes that he started writing this novel when 5cm first premiered 2007 March in Shibuya and acts as a supplement to the movie.

Since then, there has also been a Manga version of the movie which I haven't had a read yet. Other 5cm fans say there is new material in there too but maybe it's just the same as the novel. There has also been another novel appropriately named as "One More Side" where a different author (under the supervision of Shinkai) takes a different approach to 5cm - mostly from Akari's perspective instead of Takaki's.

500 of you have said you want to see an official English version since the launch of my site. It might be worth asking Shinkai on Twitter about this too if you have an account.

Anyway, Takaki's back story can get pretty depressing in the novel so don't expect a heart-warming Christmas story!

Aside from that... Enjoy and happy holidays! =) 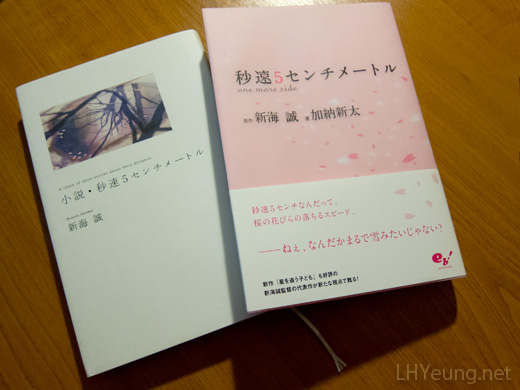 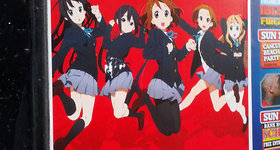 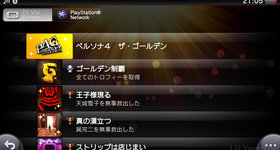 6 Aug 2020, 6:04:45 pm
Thank You very much for this hardworking.
Can i use your translation for my translation in my language?
Certainly i will give your source and blog in source page and the translation will be free like you.
The reason of this was the publisher get bankrupt and the official translation get very hard to buy (well perhaps virtually nothing in even sell of used books). So i can give many people that interested at least the other side of Takaki and Akari.
Thank You

I'm a software developer too. ;)

16 Jul 2013, 6:38:54 am
Thank you so much for translating the novel, just read through it in one sitting.
ive also read and own the manga and own the movie on bluray (its my favorite movie of all time)

thanks again for all the time you spent translating this, im with the guy above me, id love it if you ever got around to doing the 2nd novel.

2 Mar 2013, 1:58:17 pm
More than 5 years late to the party but I just watched 5cm last week and since have been scouring the internet for discussions on the movie/novel/manga. Have had the soundtrack on loop & stumbled onto your 5cm site/old xcomp site/this blog. Was very happy to catch a lot of things I missed the first time around.


Many thanks for the translation of the novel as well as the comparison write-ups. Lucky I arrived so late that your translations were done a few months ago and I could read them in one go..but now I saw that yet another novel was released back in 2011? Ugh.....

Count me in on those that are wishing that a translation of "One More Side" would materialize one day from somewhere....anywhere


Thanks again for all your work and thoughts on 5cm!

6 Feb 2013, 5:06:15 am
Is this Xcomp's Yuuenchi site? I was browsing tru my old files in the depressed mood of the incoming valentine day and find the link to 5cm/s translation I saved back then in 2008 (that's the time when I didn't have internet connection and the only browser I knew is IE, the file was saved in .mht format, LOL) and wondering how's the translation goes, and turns out its now completed. wow. Just curious, is the novel licensed in English version? and what is the "One More Side" that people talking about?
Once again, thanks for your hardwork

One More Side is another version of the novel written by a different author, taking a different perspective - mainly Akari's instead of Takaki's.

4 Feb 2013, 4:48:23 pm
Thank you, today i decided to check the website just for the sake of nostalgia and lo and behold, i found out that the 3rd episode has been translated. Word cannot describe my joy really, it's been almost 2 years since i stumbled across this site, and i has almost given up the hope of ever be able to read the 3rd episode. So thank you again for the work!

29 Dec 2012, 6:46:21 am
Words cannot express my happiness right now--imagine my surprise in finding the rest of the novel translated upon glancing at your website solely on a whim! Thank you, thank you, thank you a million times over!

(And perhaps you could find time to translate "One More Side" too?)

17 Dec 2012, 9:30:14 am
It was such a shocking surprise for me to see that you had finally finished the translation for the last chapter. I stumbled upon your site over 3 years ago, and was extremely happy that someone was translating the novel. I patiently waited, hoping that you would be able to finish one day. Then today, I decided on a whim to check the site and what do you know, it's complete. Again, so happy that it's out now, and can't thank you enough for your work.

Any chance that you'll consider translating "One More Side" as well?

17 Dec 2012, 3:53:43 am
Wow. I did not expect to see this when I came here. I always visit once in a while to see if the novel was ever going to be finished. Even though you said you didn't have the time to finish, I always hoped you would and I guess you found the time to. Thanks! I will be enjoying this. Probably going to have to read through the entire novel again too.