This week's issue of Famitsu continues to tease inform eager Persona fans. It appears some more of P4's features will be brought over and, the latest blog entry features the concept art for the Heroine by character designer Shigenori Soejima. 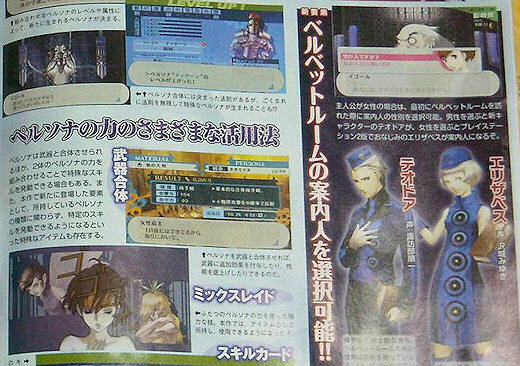 And judging from the screenshots... 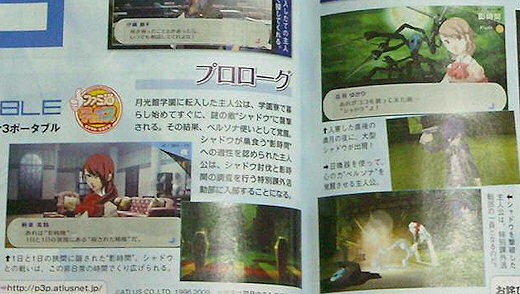 This is pure speculation but it's looking like some of the Anime cutscenes and all the in-game cutscenes will be gone judging from these new screenshots and the video clips we've seen so far. Probably partly because you can no longer run around in the 3D environments while moving between maps during the life sim part of the game.  Some of the scenarios just won't feel the same just reading through text...

So half the game's going to be like a visual novel or, more or less like Trauma Centre with only the action parts of the game in 3D.

I'm also wondering why they decided to make finding Fuka a quest and reward the player for accomplishing it... Are they going to make her an optional party member or something?

In any case, not really liking changes in presentation but, I guess they have to cut things out to save space when the UMD format can only store less than half (1.8GB) that of a single layer DVD (4.3GB). It's kind of making me re-consider getting this when there's no collector's version revealed yet.

On the other hand, I do like having portable versions of my favourite games that I can play anytime anywhere. I just hope they don't release a P3P FES or P4P version later, though. 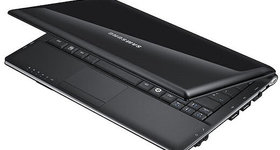 Anyone who can't wait for Intel's "Pine Trail" powered netbooks (which won't be due... 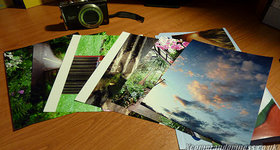 Does anyone still prefer hard copies of their photos any more now that everyones...

5 Sep 2009, 1:26:31 am
I just said "visual novel" and that doesn't necessarily mean dating sims although most of them are. Off the top of my head Detective Academy Q, Ace Attorney, Zero One, Time Hollow and Project Hacker are AVGs too which aren't all about getting the girl ;)

I don't think it will really cheapen the experience much because the gameplay system is still there. It's just that the mood won't be the same without the 3D environments for scenes such as when the entire SEES gang gather together to discuss something with those little emotimarks appearing above their heads.

5 Sep 2009, 12:39:35 am
Ha, someone that agrees with me! I had the same feeling that this portable version will be more dating-sim oriented than the PS2 game. I hope that all these versions and modifications won't cheapen the value/meaning/experience that set P3 apart from so many other RPGs. I also wonder what version will be considered the definitive or "canonical" one, this or FES.