SLA 2019 - Tenki no Ko, Weathering with You Review

Haven't been to a Scotland Loves Animation for several years now but kept an eye out for Weathering with You this year since the disc release is probably still a long way off. It was pretty much a given since the event screened Your Name the last time before disc release. I dropped into GFT to buy a ticket on the same day the organisers revealed it because I knew it would sell out but not quite as quickly as I thought it would. It actually took about 10 days before the Saturday showing was sold out and a Sunday showing was added. 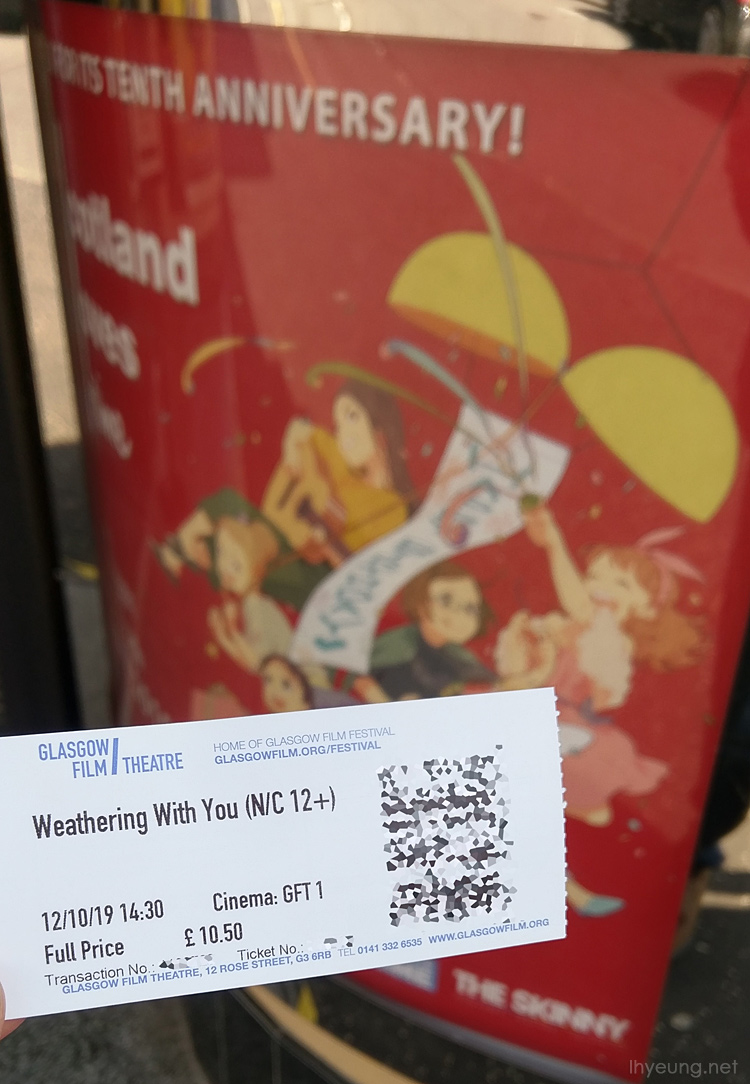 Funny it was raining because rain is a big part of the movie even though there were no rainbows. 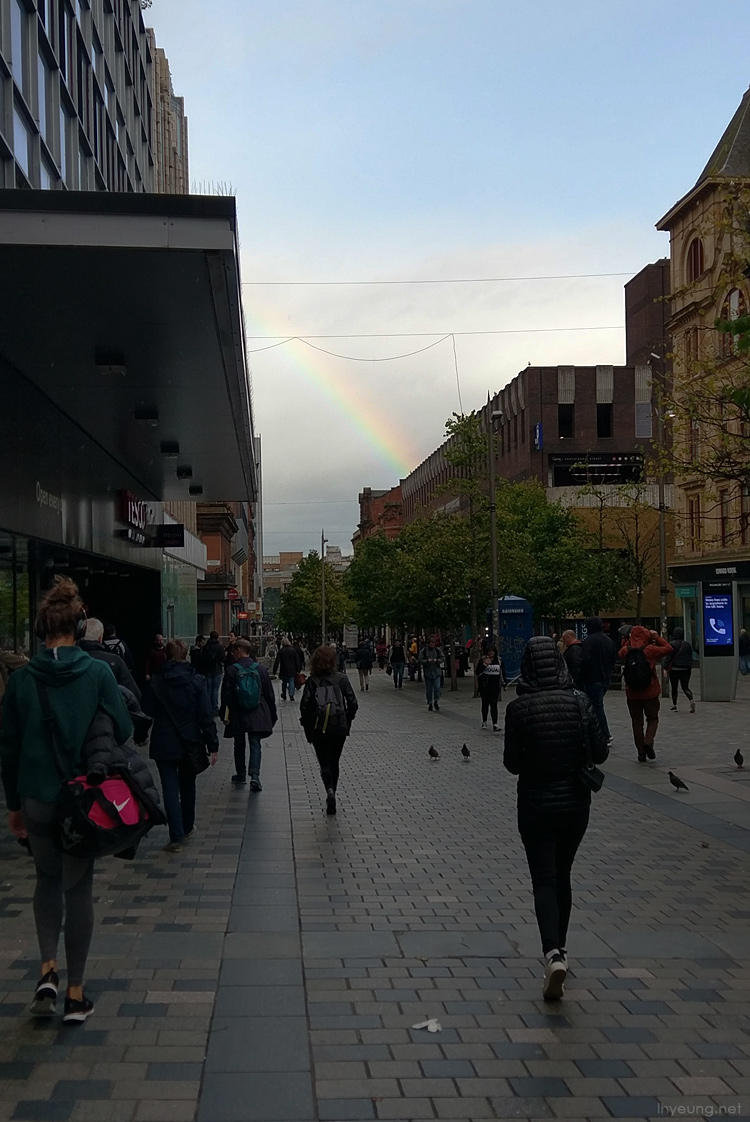 So on the day of the screening, I spotted a ticket for the movie right outside. A cam version supposedly from the Singapore screening because of the English/Chinese subtitles was released so maybe that's why someone decided to leave one behind. Or maybe it was a stunt for marketing? 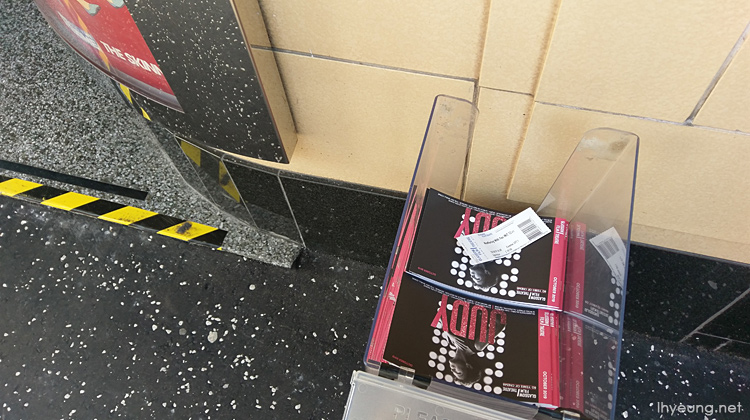 It was dry even though the rest of the week has been raining. Ironically Japan happened to be in the middle of the "worst typhoon in decades" Hagibis which is also very much the same as the movie so I joked "sunshine girl" must have moved from Japan to take a holiday (you'll get it after watching the movie). Not that it managed to knock down the Gundam Unicorn Statue in Odaiba... Joking aside, I do hope everyone is safe and I'm sure it was a lot of stress trying to stock up on food from stores.

Anyway, I was kind of expecting something to be given out like they usually do at SLA screenings and it turned out they were giving out a postcard. Cool freebie. Didn't know it was actually used to ask people to rate the movie until I was on my way out and, was handed a lolly stick to drop into one of 5 boxes that had stars on them.

I gave it 4/5 because it had more of Shinkai's familiar touches in it than Your Name but still didn't quite feel like one of this movies from the pre-Your Name days. 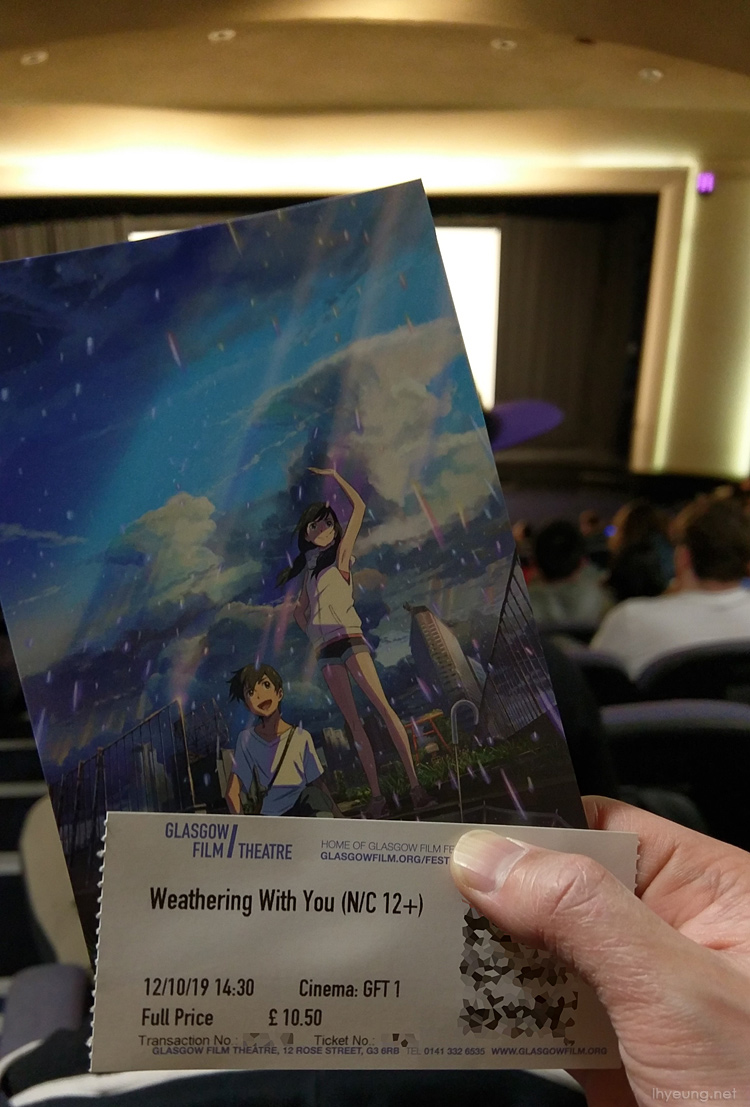 I actually arrived 30 minutes before the screening so I could pick a seat but there was no queue. The extra Sunday showing seemed to have one apparently. Sadly no postcards were given out on the second showing.

The rest of the line-up wasn't that interesting for me. I was interested in Code Geass: Lelouch of the Re;surrection and Psycho-Pass filler movies but they already have or will have disc releases soon. They were being screened in Edinburgh only too and don't think it's worth the trip over. Mystery movie turned out to be "One Piece: Stampede" as the SLA team had heavily hinted on Twitter so the fans to "piece" together. 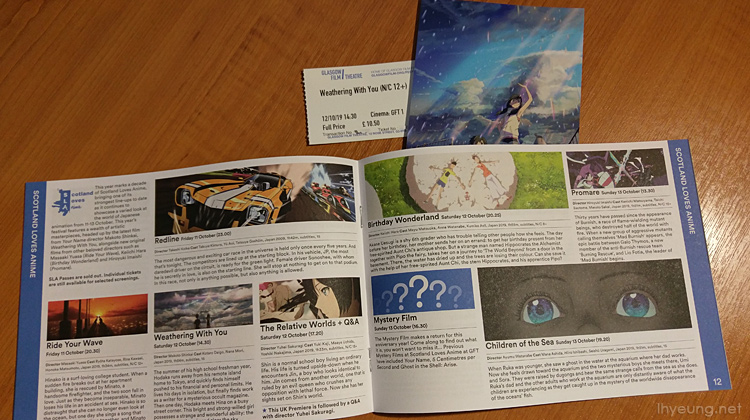 Tenki no Ko - Cameos and Nostalgia for Shinkai Movie Fans

16 year old Hodaka ran away from home and has been desperately trying to find a job, even in the seedy areas of Kabukicho in Shinjuku. Fortunately for him his saviour Keisuke Suga from his boat trip to Tokyo happened to be looking for someone and had left him his business card. An occult article writing job wasn't exactly what he was after but he was offered shelter and food too so it was good deal. One day, he reunites with "17 year old" Hina the girl who had shown him some generosity when he was running out of money and learns of her power to whisk away the rain, giving her the nickname, "sunshine girl". When he learns she too was having trouble making a living, they decide to advertise her powers. With the sudden increase in rain, business is good but they soon discover there is a cost to being a "Weather Maiden". 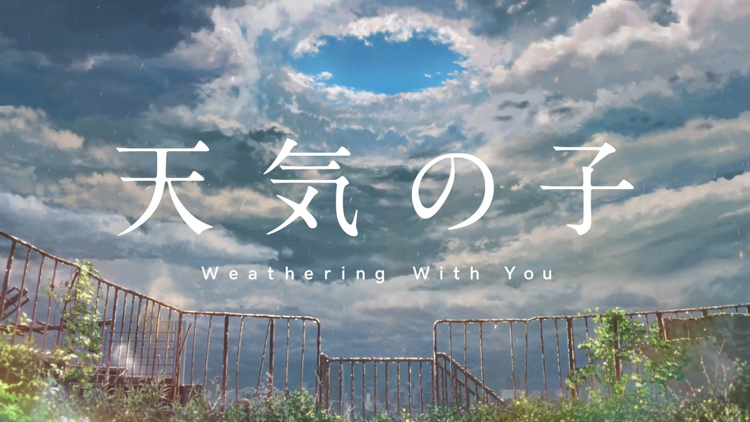 So a bit of trivia from SLA2019. Apparently after Your Name became a run away success, Shinkai thought it was important to make this movie with a broader audience in mind rather than just Anime fans.

He also seems to enjoy animating weather because of all the granular elements involved such as rain drops so, let's talk about the art first then since it's what hits out at you first.

Makoto Shinkai fans will probably get a bit of nostalgia right from the start as they see the Toei Oedo crossing again from 5cm where adult Akari stood during the theme song in the last episode - from a different angle and framing of course. Hina walks by during the opening scene when she makes her way to the abandoned Yoyogi Kaikan. 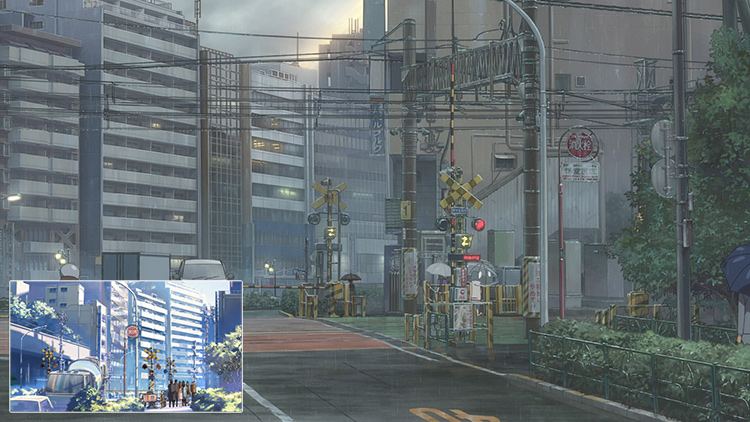 Same for the Tokyo skyline and Shinjuku Gyoen National Garden from Garden of Words. Then there's the train windows, overhead shelters and platforms... Shinkai has mentioned before re-using assets in his movies isn't uncommon practice. With that said, his team still produces some beautiful eye candy. 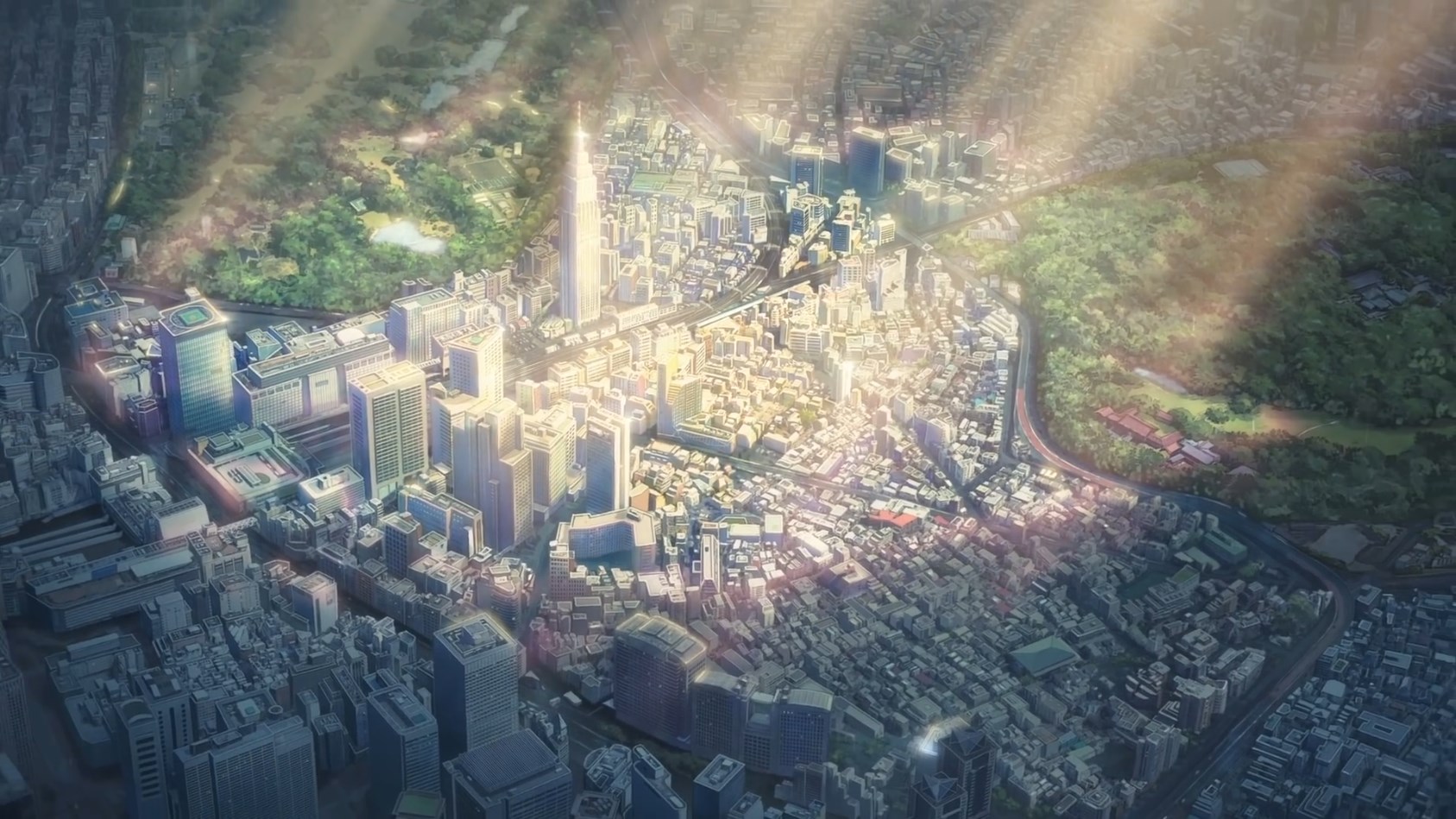 And this includes food art which once again isn't parodied so there's probably a lot of sponsoring. You have to wonder if McDonald's Big Mac sales went up after this movie became a hit... It was a significant moment in the movie after all even though the rest of the food art looked great as usual.

Best be watching this movie on a full stomach or it'll make you hungry!

Unfortunately the 3D scenes stand out a bit much compared to Shinkai's highlight heavy but beautiful renders... A lot of the aerial fly by scenes were done with the aid of Google Earth as revealed in volume 254 of the CG World magazine (you'll see it in the credits too). The camera work looks good but models just stand out too much. 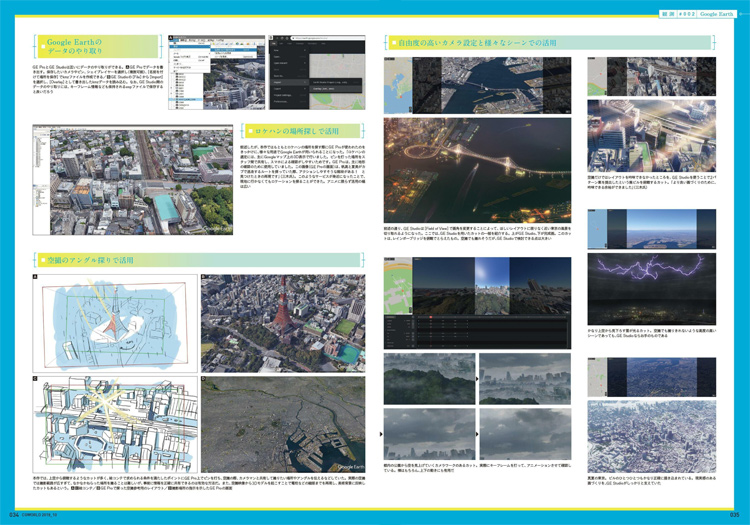 We all know the Yoyogi Docomo Tower is a signature of Shinkai's movies by now, something highlighted in the Your Name art book so it appears multiple times and so does his show for his love of cats. Unfortunately the Yoyogi Kaikan building behind the tower featured in this movie has been demolished towards the end of September, 2019 and it really was an abandoned place. I was kind of surprised to learn that because the owner could have cashed in on the place but I guess it would have been dangerous for fans to swarm to the unmaintained building. That said, they did delay it for a month or two apparently.

Some locations I've never been but recognise from watching other Anime shows such as the seedy Kabukicho area. If you've been to Japan and frequent the places popular with Anime fans you'll probably recognise a lot of the places including Odaiba where the 1:1 scale Gundam statue is and even the Gundam Cafe just outside Akihabara Station although they got rid of the logo of course. 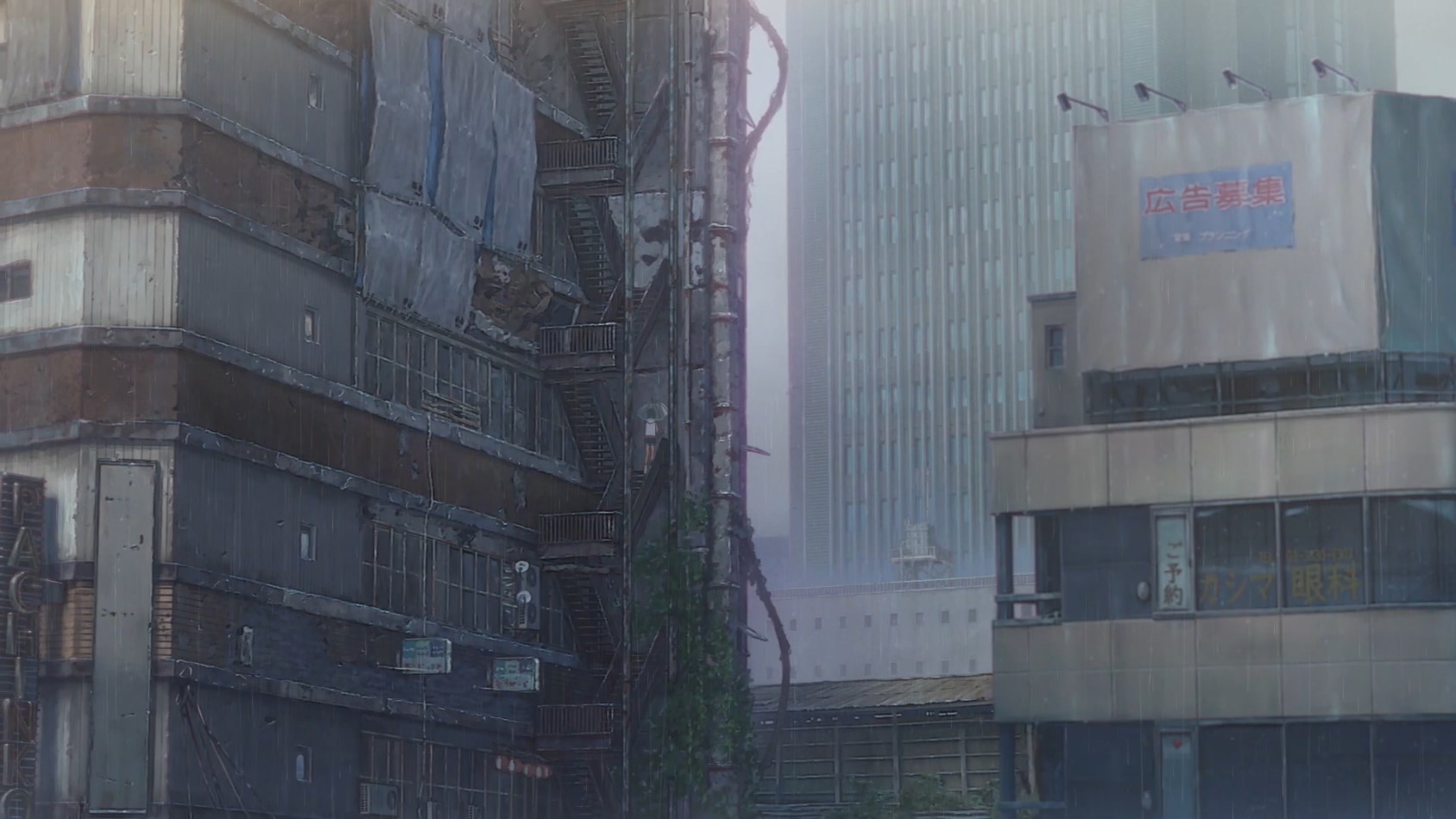 While in Your Name you had a natural short pantie scene (as Shinkai put it) with some self-groping there's longer cleavage shots in this movie. I think this is something new to Shinkai's movies since he teamed up with more well-known figures from the Anime industry so they were probably ideas from his growing team. It doesn't shy away from sexual jokes much just like Your Name but I think that's the audience it's aimed at, an older demography. That said, Natsumi proves to be more than just a fan service character which was good to see.

Movie is also so full of cameos from his past movies and you don't need to keep an eye out for them (well, two of them you only see the back of their heads!). They get a lot of screen time! Not even Yukino got so much screen time in Your Name. I suppose you could call this fan service, bringing back characters from popular old movies.

Character expressions are really familiar as they're done by Masayoshi Tanaka again which you'll probably recognise from AnoHana more than Your Name really. Hodaka looks like Taki and Youna looks like Hina. 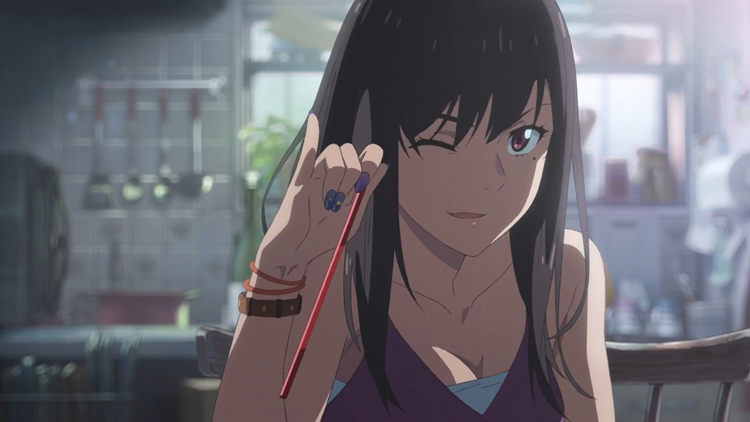 So onto the story itself.

The theme of the movie based on stormy weather reminded me of a draft story Shinkai wrote while he was brainstorming 5cm, "The Sky Outside The Window". It came as a bonus with the DVD release and was about a girl aspiring to become a novelist and ends up in the eye of a storm while brainstorming. It makes me wonder if this was Shinkai giving another shot at using weather as a theme. 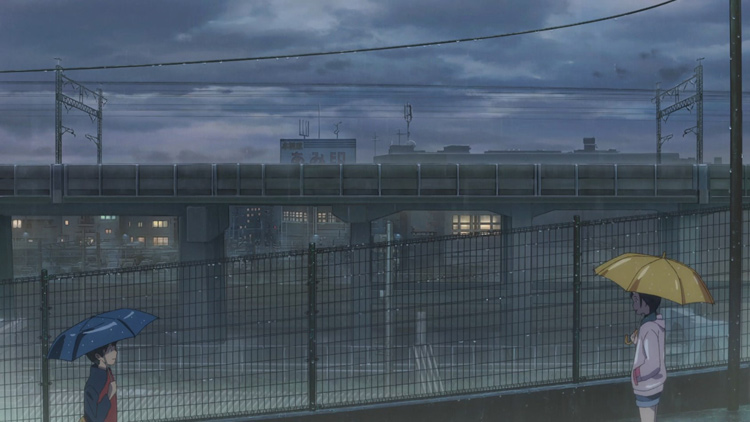 From the start I quite liked the movie better than Your Name already. Your Name's body swapping idea had been done before so you kind of already knew what to expect. This felt a bit more original with a run away kid taken in by an occult article writing business.

With so much attention to climate change I guess it wouldn't be surprising if this was why weather related Shinto folklore was used. The flow actually feels very similar as the movie feels like another mix of folklore, science and romcom. Direction feels similar too where it makes you feel happy and comfortable before it pulls the mat from under your feet. I think the main improvement over Your Name is it gives both Hina and Hodaka fairly realistic problems for the viewer to empathise with instead of just leaving it to supernatural problems. On the other hand, fate was a big factor in Your Name bringing Taki and Mitsuha together as they magically shared a dream across space and time. 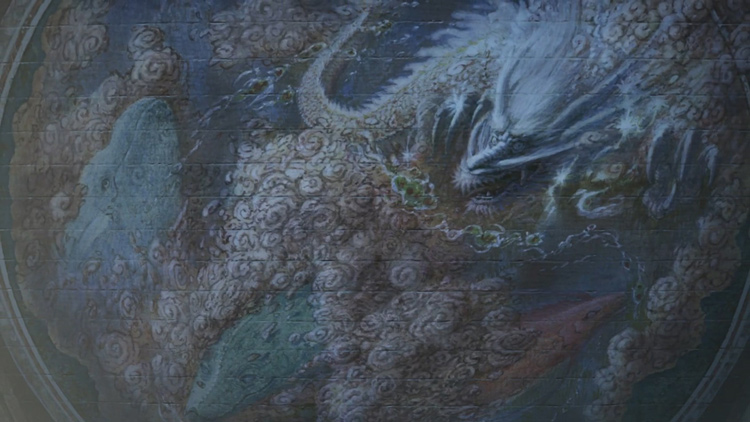 The ending was interesting. There was yet another moon shot to hint everything's going downhill soon as with past movies but this one wasn't split by wires. I saw a lot of reactions on Twitter summing up the endings for Your Name and this movie so I kind of knew what to expect but it was done pretty well. The movie does a good job of really pushing that sense of desperation using firearms and violence while the wrap-up goes back to Shinkai's early days of bitter sweet movies compared to Your Name where it was everyone happily ever after. Not everyone can have happy endings, pre-Your Name days in other words. Comedy wasn't exactly a big part of his movies either until Your Name and again, I put this down to the new team members who had a part in other popular titles such as AnoHana. The comedy feels very similar.

Overall, the movie feels better balanced and had more original ideas, closer to his style. 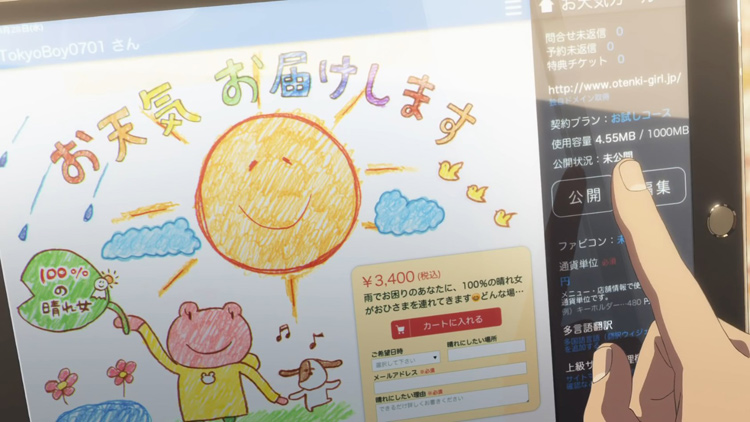 And perhaps more importantly, he touches on the idea of moving on again and that not everything is within your control. That said, it doesn't mean you can be inconsiderate to others and just do whatever you like but anyway... After watching this movie, I don't think viewers will see rainy days the same again. It will be Weathering with You and the antics of the "sunshine girl".

I think this was a great movie for both new Makoto Shinkai fans who only got introduced to his work by Your Name but also for old fans alike because it's a blend of both his old and new styles. Will he continue sticking to this formula for his next movie where he continues to mix sci-fi with folklore with added fan service?

And no, there's no bonus scene after the credits so don't have to stick around for one if you're watching it on the big screen.