Natsume was on the way home with his friends who were discussing whether they should go snowboarding or not but, Natsume wasn't paying attention. He was too busy staring up at the sky. He didn't look too well either. Maybe he didn't have enough sleep but, he should be fine because he's already taken some medicine. Suddenly he notices a long haired little boy across the bridge. He points out to him but none of this friends could see him. Natsume thought to himself it must be Youkai as the boy runs off. 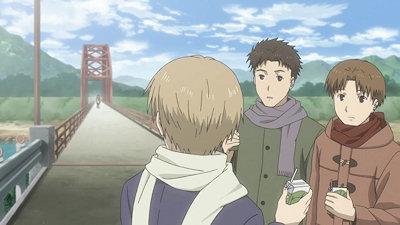 Arriving back home, Natsume finds Nyanko busy stuffing himself with some Yokan. He is told someone had been loitering around the house for some time. Natsume looks out the window and recognises the boy he had saw on the bridge. Again he tries to run away but this time he runs into a tree. He seemed like a very thick-headed to Nyanko. Inviting the boy in for some tea, the three of them sit quietly together. Natsume wonders if he didn't understand the human language because he was so quiet but, finds out he does after Nyanko gives him a bite.

It seems the boy thought Natsume was Reiko his grandmother, the previous owner of the Yuujinchou. The boy is shocked pretty badly when he learns Reiko was already dead long ago and only recovers after Nyanko gives him another bite. Natume offers to return his name and begins chanting the words to search the register but is surprised to find it doesn't appear. He and Nyanko tries to discuss what was wrong. Was it not in the register? No, it reacted so the boy's name must have been recorded. They are interrupted when the boy tells them it wasn't in the register. Reiko probably stored it somewhere else. 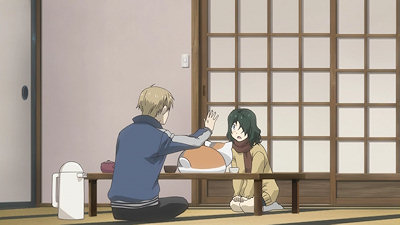 Together, they set off to a nearby forest where Kiriha believed it was hidden. Reiko had tied it to a branch somewhere and had promised to return it to him 50 years later. When asked why he wouldn't go find it himself, he explains that Reiko told him the world would be flooded and destroyed if he did. Nyanko and Natsume glances at each other. It must have been one of Reiko's mischievous tricks again but, Nyanko understood why she did it considering how naive the boy was. He's been waiting that long without even taking a peek at the paper so he no longer knows where it was exactly now.

Nyanko sugguest they give up but fortunately for Natsume, an old friend Kaname Tanuma who calls the rest of his friends to help them out. Of course, they didn't know the piece of paper was linked to Youkais. However, the friends end up fooling around more than helping. Nyanko returnes with Hinoe, another old Youkai friend but Natsume suddenly feels faint and passes out. His fever had grown worse. 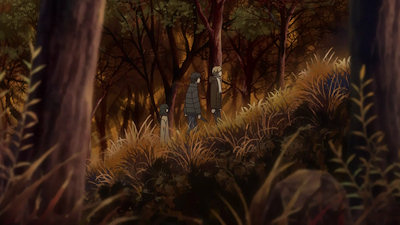 As he rests in his futon, Nyanko sighs once again he was too nice always going out of his way to help others. Kiriha looks down, thinking it was all his fault but, Hinoe tells him to think again. Natsume ended up this way because he had put in the effort to help him. He shouldn't waste his efforts. It reminded Hinoe very much of Reiko when they first met.

At the time, Reiko was lost in a forest because she was hiding from three boys that she had beaten up and wanted to wait until things had settled back down a bit. She asks Hinoe to help her out of the forest. Hinoe had agreed thinking she didn't know she was a Youkai and would make a delicious meal. As they head deeper into the forest, Hinoe is attacked by crows who is always after her shiny hairpin. They successfully manage to steal it but Reiko steps in just in time, throwing a branch and knocking the pin out of the crow's grasp. She then jumps into the lake to retrieve it and uses it to blackmail Hinoe to lead her out of the forest, revealing that she had known she was a Youkai all along. 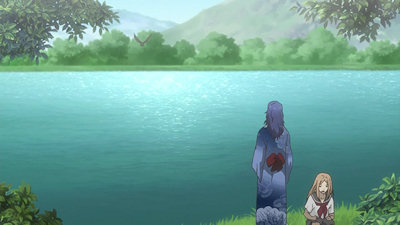 Since then, Hinoe respected Reiko very much. Nyanko goes onto wondering why Reiko ended up making up that story about the sea and Kiriha explains it was probably because he told her he wanted to see the sea. He was asked why didn't he just go and see it himself but his reply was those born in the forest can't leave it even though there's no barrier around it.

It was then that Reiko described it to him. The sea was blue, stretched endlessly, full of waves with the sun's rays shimmering across the surface... And it also had a long neck monster living in it, an island with a secret base and sometimes if one was lucky, flying saucers could be seen too. Nyanko and Hinoe sighs and imagines what the mischievous Reiko's expression was like when she described the sea. Kiriha boy looks down realising he was lied to again. Just then, Natsume looks up asking if he thought Reiko was a bad person. He remains silent and looks away. 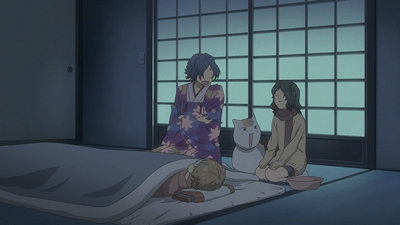 The next day, after Natsume's foster mother left, two Youkais arrive letting Natsume know that Hinoe had found the paper slip in the forest. Despite being told to stay and rest in the house, Natsume insists in going together with Kiriha. They soon arrive but Natsume tells Kiriha to retrieve the paper himself. At first, he was scared but he starts the climb. He almost falls along the way but recovers and continues up. He soon finds the piece of paper tied to a branch and beyond that, was also the sea. 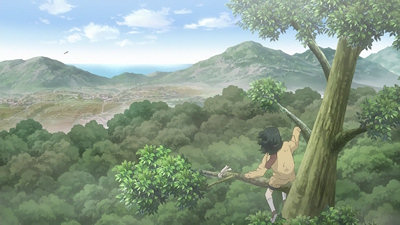 Hinoe realises that Reiko knew 50 years was a very short time in the lifespan of a Youkai so, she must have planned this all along so that Kiriha could see the sea for himself. They return home and Kiriha is returned his name. He felt it was sad that no traces of Reiko will be left now that the paper was gone but, Natsume takes his hand and puts it against his heart. He tells something was left behind.

Everything they have seen and felt will never be forgotten. 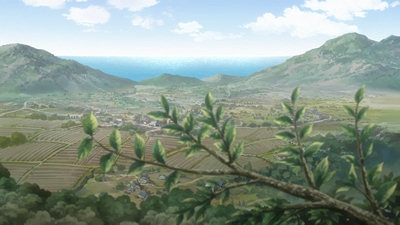 With that, Natsume changes back into his pyjamas just in time before his foster mother returned.

A 50 year old naive kid. Only happens with Youkais. Looks like Reiko was quite a violent girl! 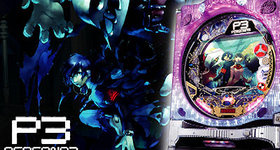 Taiyo Elec is due to release a Persona 3 themed Pachinko machine this month which is... 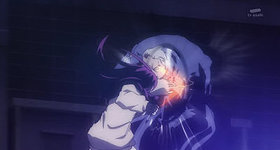