The fight begins between Steiner and Kuro. Kuro appears to have no problems dodging his attacks with her speed and manages to land a few hits on him. 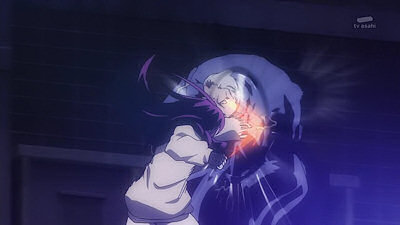 However, none of her hits seem to have any effect. Steiner smirks knowing that she and Keita had just made a contract not too long ago so her power won't be very high yet. Nevertheless, he doesn't hold back. Fighting back, he pins Kuro to the ground and starts punching her mercilessly as Kuro blocks helplessly. Excel wasn't worried at all and was sitting on a rail playing her Dolfar game. Seeing this and remembering how Kuro said she will protect him being the contractor, he decides to try and Synchro with her again.

A small burst of energy reaches Kuro and she manages to repel Steiner off her. She wasn't certain she can win but know her strength will be much greater if they performed Synchro. After doing so, Steiner is knocked to the ground by surprise. Kuro turns round happily that they seemed to have won. 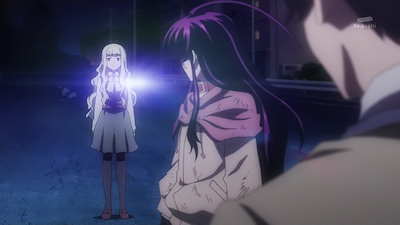 Excel now got up. She walks over to Steiner who was also picking himself up. They didn't expect someone like Keita to manage Synchro. But what surprised them the most was that Kuro knew nothing about "Exceed". It was a unique powerful move that can be performed once a Guardian has made a contract with someone else. Keita recognises the word when they encountered the Tribal Ends but Excel explains they could only mimic the same moves but not possess the same power.

The fight wasn't over and Steiner was having fun now. Kuro uses her Exceed, "Mega Excel" to attack again but ends up being repelled by Excel's shield, "Excel Wall" a power that the Thousands possessed. Again, it was something that Kuro seemed clueless about. Excel decides it's time to end the little game and finally Synchros with Steiner allowing him to go all out. He triggers his Exceed, "Stampede" splitting into multiple copies of himself and begins attacking Kuro again relentlessly. 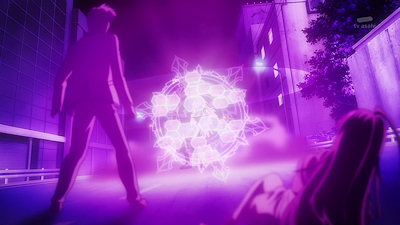 Just as Steiner was about to finish them off, Excel stops him even though he insists on letting the young people know the consequences of fighting against them. There was something she wanted to ask them. She smiles and informs them the fight was for self-defence when they had sensed the anger in them. For now, they will be escorted home and have the discussion there with some refreshments. 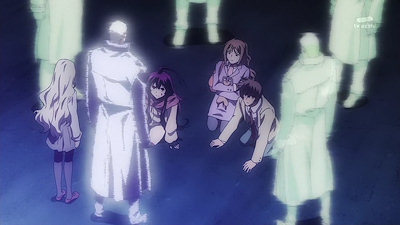 Back at Akane's apartment, Excel was enjoying some "Earl Grey Tea" Akane had brewed. She may look like a kid but was in fact not one. They begin explaining they were members of a Tera Guardian Alliance known as, "The Noble One". They mainly operated in Europe and were responsible for keeping the balance of Tera energy. Discovering that there were signs of the balance breaking in Japan, they were dispatched to investigate and that was when they sensed a trace of Guardian presence on Akane which is why they followed her. In their experience, this usually lead them to the source of the problems they were seeking to solve although this time they were wrong. 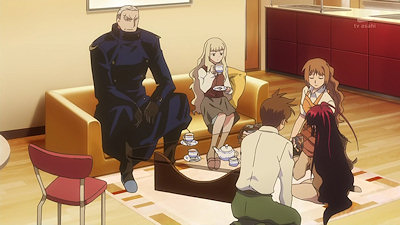 Seven years ago, their investigators had managed to snap a photo of an incident that occurred on the island of Okinawa and was sure some secret operation was underway there. Recently, some abnormal changes in Tera have also started to occurr in Tokyo too.

Taking a close look a the photo Kuro recognises the Synchro symbol but before she could say anything, Keita recognises the woman in the picture was his mother, Maki. He was sure she died in a traffic accident so it couldn't be her but remembers the look alike he had saw on the train. Akane notices the date on the photo taken six months ago which means Maki should still be alive just now. Okinawa was where Keita's mother was born. 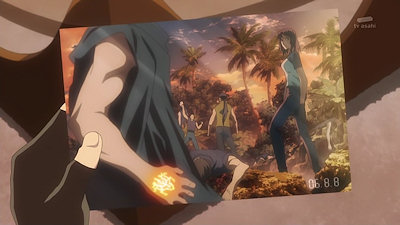 However, that was all Excel and Steiner were willing to divulge. As they get up to leave, Keita demands to know what he should do if they ever get attacked again but, Excel just smiles saying they can defend themselves now that they can Synchro. She also leaves her email address with Akane should they need to contact her.

Meanwhile Yuki Kaionji was enjoying herself bathing in the Tera energy of  six other people's Tera energy. Hiyou was there too and orders a woman named "Mikami" to take care of his useless subordinates and Kuro. 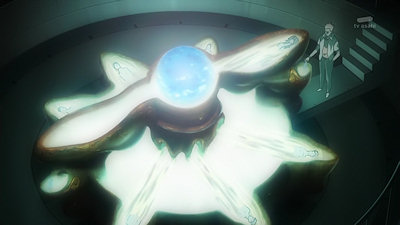 Later that evening out on the balcony, Kuro apologises that his mother had to be part of all this. She plans to travel to Okinawa alone to find her brother and also help Keita find out the truth about his mother to make up for all the trouble. Ketai looks away and knowing Kuro had no idea how to get there, decides to go with her. He wanted to know the truth himself. 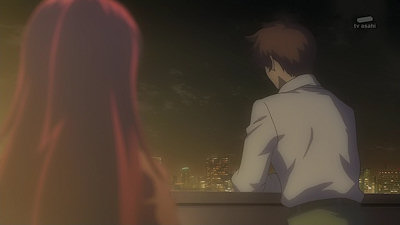 Go! Go! Power- I mean, "Synchro!" Hope they decide to skip the whole Synchro animation later in the show. All the move shouting and posing shots are starting to make the show very cheezy.

The overall direction was very generic this time with the common enemy playing around then getting serious routine. Put that together with the weekly Kuro abuse and it's almost a horribly dull episode. It's only saved by a little plot progression with the new bits of info being revealed. Even the battle animation wasn't very impressive.

That aside, Keita's got a nice view from his "mansion" (Japanese for apartment)! Then again, I guess he does live in Tokyo.

I also wonder if they'll ever end up making a beat-em-up game out of this show... 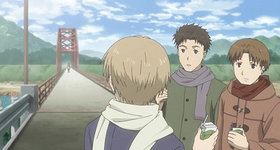 Episode 5 Summary The Promised Tree Natsume was on the way home with his friends who... 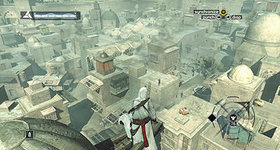 There was plenty of hype when Assassins Creed was announced for the Xbox360 over two...