After my graduation ceremony at junior high...
I went and had some Ramen before going home - Soumi

Having found Sora, Gouta phones Saori to report that she was safe. She was glad and passes on the message to Seiichirou who was also thankful but laughs a little when he learns Gouta had been prepared to take punishment and use magic to find her. The two of them hold hands as they made their way home, Sora repeating Gouta's name happily. 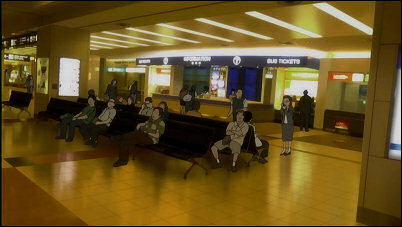 The next morning, things were back to normal. Gouta was preparing breakfast again with Sora helping with the Miso soup. They laugh together thinking how miso is best when tofu and nameko mushrooms are used to make it. It was also the day of the graduation exam. It's been a very quick month. Everyone thanks their instructors before heading out to the school. 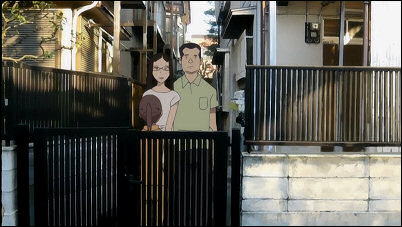 There, they are greeted by Kawada who explains to them the fifty minute exam will be split into two parts, a written test to see what they remember of all the magic related history, physics, science and actual case studies that they have been taught thus far and the second, will be a practical test to see what they can form out of water. Upon asked to open their papers, Oohata ends up whispering to himself as usual, thinking how easy the test was and ends up giving the class a laugh when he is yelled at by Morishita as usual.

Meanwhile, Saori and Seiichirou were sitting together thinking how fast the month has passed. Seiichirou thinks Sora has lived a very fulfilling life for herself. He wonders if they'll be able to send her back to Biei with a smile. 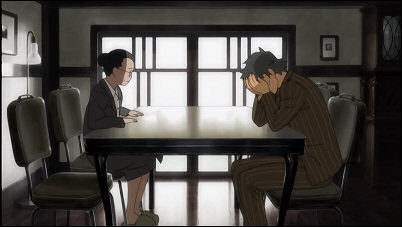 Back at school, it was breaktime. Both Sora  Everyone seemed to have been very confident over the paper test. Morishita was speaking to Gouta again about how he's worked hard. He will try not to cry during the graduation ceremony. Sora and Yamabuki watches them thinking how weird the assistant was.

When it came to the practical test, they were all just as confident as they took turns to freeze their tank of water. Yamabuki managed to create a tank full of little shapes while Sora managed to form a very interesting sculpture. Once again, everyone was impressed by her magic skills. It looked like two people dancing together. Asagi admits defeat even though Sora never thought of it as a competition. Kuroda tries to cheer Asagi up by saying how beautiful her model was too only to be called an idiot again. 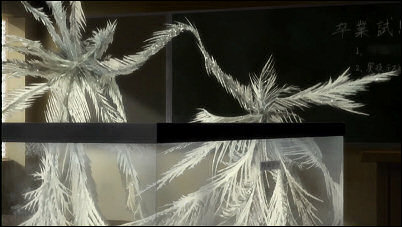 Soon afterwards, it was time to announce the results. Kawada's strict expressionless face lightens up with a smile, happily revealing that all twenty students had passed. The class cheers and it a few minutes before Sora realised she was now officially a qualified mage.

At one clock, it was time for the graduation ceremony. Everyone claps as each of them are called out to receive their certificates. Honomi Asagi had some excellent scores in both tests but is reminded that she shouldn't get over confident in her skills and continue to work hard. She smiles happily waving the certificate about as she returned to her seat. Unfortunately for Kouji Kuroda, he can't receive his certificate just yet due to his poor attendance and will have to stay for another week of lessons. Gouta could barely hold his laughter in seeing his expression. 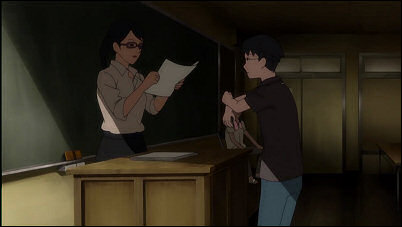 After several other students, Gouta Midorikawa gets up to receive his and is surprised to find his parents were at the back of the classroom together. Seiichirou, Saori and one of Sora's former clients Motohashi were also there. Gouta receives his certificate and is applauded loudly for his hard work and overcoming his difficulties. Morishita cries out that he had never been moved so much in his twenty-five year career as a mage.

Hiyori Yamabuki is encouraged to keep using her developing magic skills through the kindness of her heart. She blushes and she lets the class know that she will continue to work hard once she's back in Nagasaki and remind herself of everything she has done here. It was then Sora's turn. As she took her certificate, Kawada thanks her for bringing everyone courage. She smiles as Seiichirou congratulates her out loud from the back of the classroom. One other student also does the same but a bit too loudly. He blushes and hides his face as everyone laughs. 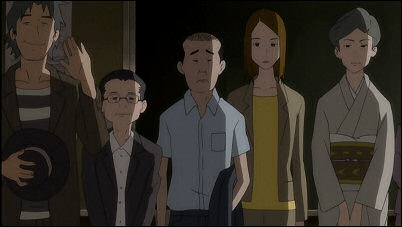 The ceremony ends with Kawada reminding them that their training isn't over yet and that there may still be many difficulties lying ahead of them in life. However, they shouldn't given up and remember they aren't alone. Everyone here will be working hard too and they can even contact each other if they need to. She too will be more than willing to help if there's the need. They are always welcome back at the magic bureau.

Back in the lobby, Sora is greeted by Motohashi who had come to let her know she will be visiting her daughter in the UK. She will be sure to visit Peter Rabbit during her stay there. Gouta too was surprised to find his parents were back together. His father blushes when his mother Kazumi explains he had approached her to say that there is no future for him without her. Gouta was glad they were together again of course and immediately takes the chance to introduce Sora to them. As he runs of to get her, Kazumi gets excited wondering if this was their son's special person. They thank Sora for helping Gouta out. 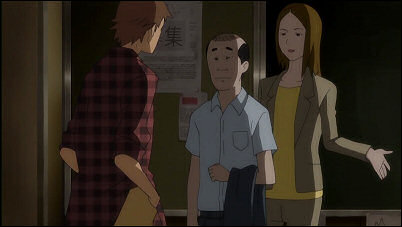 As the students are left alone together, Sora thanks her friends for everything, glad that she could graudate with them but Asagi wonders why she said that. She teases Kuroda that he hadn't graduated yet even though it was just because of his attendance rate. She and Yamabuki promises they will go visit her on Hokkaido someday. Gouta nods that he will do the same. Kuroda doesn't say anything and surprises Asagi when he wonders if they will be going to visit her alone together. Asagi blushes and everyone laughs as Kuroda thinks she is still too over-proud.

Gouta and Sora make their way home together. At the crossing, Sora lets him know she had been thinking a lot last night. She originally had made up her mind to tell him to forget about her but in truth, she didn't want that to happen. With tears starting to stream down her face, she hopes he will always remember her even if he ever gets married and have children. Gouta calls her silly and just holds her hand tightly. Spending the afternoon together, they pass by Yasuko in the evening. She was glad to see they were back together and sings a song to celebrate, "Your Guitar". 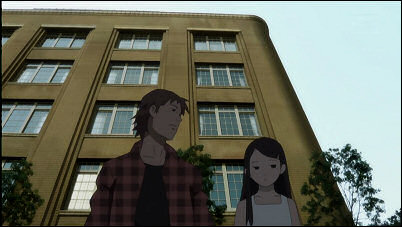 That night, Sora sits together with Seiichirou out in the garden. She was thankful that he had agreed to be her mentor. Seiichirou thanks her too for teaching him so many things and thinks that he was a bad mentor. He couldn't stop her putting too much of her personal feelings into the requests, engraving herself in the hearts of their clients but, was glad they met. He wishes he had a daughter like her someday. Sora sternly says he will have to find a wife first and they both laugh. 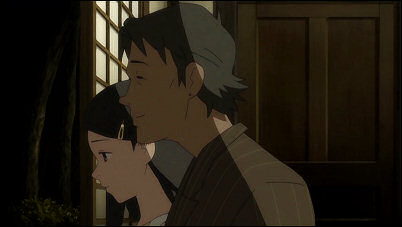 Early next morning, only the dragging sound of a suitcase on wheels can be heard in the quiet streets of Shimokitazawa as Sora made her way to the station. As she sits on the plane back to Biei, Hokkaido, Gouta was sitting in the park where he had found her gazing up into the sky. 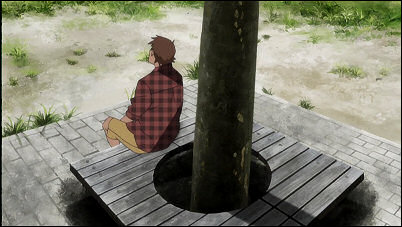 Next episode, "Sora of the Summer".

I'm going to be the second one stealing Gouta's heart! - Kana 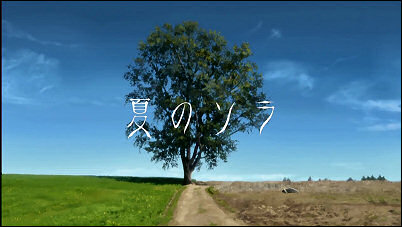 A great episode. It was so well presented that it made up for the sudden change of pacing since the last two episodes. I could just feel how happy each of the students were during the graduation even though most of them that appeared had less than a few minutes of screen time for the entire series. I guess it's all those little touches they put in. The girl with the cap making a speech, the different kind of students that appeared before the desk to collect their certificates then, that big burly guy congratulating Sora out loud and getting embarrassed.

It reminded me of my own graduation during high school when everyone waited for their turn to go stage for their certificate while cheering and clapping. I remember one person dropped their certificate when it was being passed to them and the girls behind me giggled a little nervous, hoping they won't end up doing the same because it would embarrass themselves. All the parents were there, people were hugging and giving each other best wishes for the future.

Anyway, back to the show. I think one can feel the loneliness when only the sound of Sora dragging her suitcase along the roads could be heard. I know her friends has promised to visit her in Hokkaido but looks like they don't know about her illness. I wonder how it will end? That hint at the crossing doesn't sound too good.

On another note, liked the sculpture Sora managed to create. It really did look like two people dancing on an ice rink leaving a trail where they've been and holding hands together at the end. Also interesting how we saw people playing both the Sony PSP and Nintendo DS in the same episode. 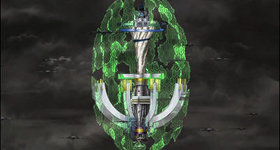 Episode 24 Summary - The Sky of Damocles The Damocles continue to launch the FLEIJA... 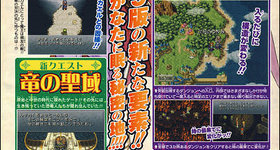 But yeah, a good episode.