Episode 5 Summary - Knights of the Round

The Black Knights continue their celebration as night falls, throwing their straight jackets into the air. Meanwhile, Kallen, C.C. and Lelouch were updating one another on the situation. Lelouch planned to make use of Xing Kue but wasn't quite ready to reveal Rollo or his own identity to the rest of the Black Knights yet. Putting his helmet back on, he prepares to address his followers outside. 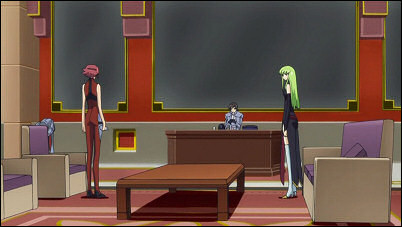 Making his appearance, Chiba demands an explanation for Zero's betrayal from season one, saying how they wouldn' t have been captured if it wasn't for him. However, Zero doesn't apologise or explain anything and simply claims it's all part of his plan to defeat Britannia. Just as the crowd was about to break out into disorder, Toudou steps up to speak out for Zero, asking if he had tried to help them win. He replies he did and at this point, Toudou and Ougi makes the decision to stand by his side, knowing they will need his power to accomplish what they all wanted. Freedom. 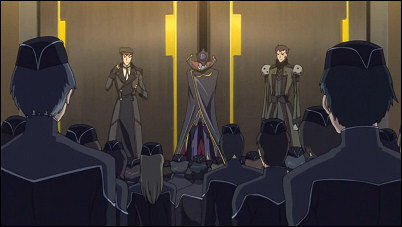 The next day, Lelouch is surprised to find his old friend Suzaku Kururugi back at Ashford Academy. The two thinks back to the time when they first met before Japan was taken over by Britannia and how they had also fought against one another as Suzaku approached his seat next to Lelouch.

Soon, the group of friends were celebrating Suzaku's return. After that great showdown, almost everyone had returned home including all the teachers. That was why no one knew who Suzaku was and why there were so many new faces around. The friends then try to find out who was behind the mask of Zero but Suzaku refuses to say. 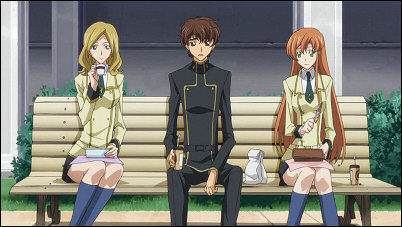 Later, Suzaku was meeting up with Viletta at the secret base to report. He hasn't noticed any change in Lelouch to prove that his memory had returned but, Suzaku was determined to give the investigation a little more time. Rollo who was also present, wonders if he didn't trust their surveillance but Suzaku doesn't reply. He tells him to stay with his role and just concentrate on capturing C.C. A welcoming party was going to be thrown for Suzaku so he will be able to use that chance to continue his investigation. 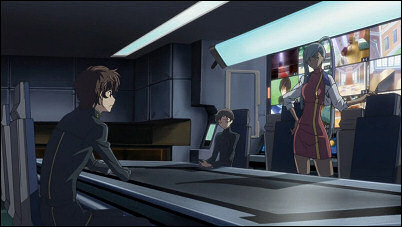 After the meeting was over, Rollo reports back to Lelouch about what was happening. Only Viletta and Suzaku were around now and Lelouch had plans for them.

At the Area 11 Governor's Office, the Granford Knights were reviewing the damage that has occurred since Zero's reappearance until suddenly their alarm sounds. They leave their office and find a member of the Knights of the Round was causing a ruckus, testing their defences. It was the Third Knight, Gino Weinberg in his Knightmare Frame the Tristan. As the Knights battled away, Suzaku soon arrives at the scene and stops the duel as the Seventh Knight. He had expected Weinberg to bring him his Lancelot but it appears Lloyd will be bringing it over the following week. With Anya also present, Suzaku was sure he'll have the military strength to handle whatever Lelouch tries to pull off. He is going to bring them both along to test Lelouch. 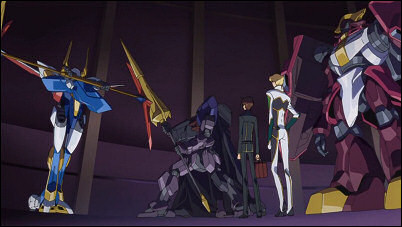 Soon, it was the day of the welcoming party and everyone was having fun. Except for Lelouch and Rollo that is, who were peeling potatoes. It appears Milly wanted revenge on what happened the other day. Suzaku drops by one of the kitchens to check on Lelouch but discovers nothing out of the ordinary. While peeling away, Rollo continues to hesitate whether he was making the right choice by trusting Lelouch. When Lelouch shows him the correct way to hold the knife, he decides to tell him the weakness of his Geass but slowly trails off.

At the same time, Rivalz is going about making preparations for another giant pizza. While rummaging around the basement, he comes across a number of boxes one of which had the words, "Beard face!! This is mine!! Don't touch! Don't open it! Throw it out and I'll kill you!" Eventually he finds energy filler he needs and goes out handing out leaflets to people. 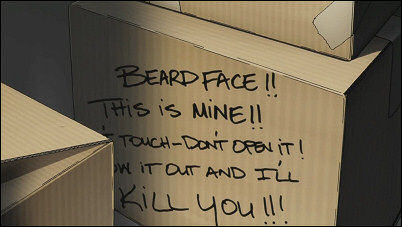 Lelouch was on the rooftops making plans when he spots C.C. taking a leaflet. He rushes down to whisk her away, quickly putting a paper bag over her head. She remarks how pushy the "young boy" was and well aware that the Emperor was after her but, couldn't resist the thought of another giant pizza.

Meanwhile, Viletta was posing for the swimming club cafe as part of the event activities even though she didn't want to. She would never had agreed to being a teacher if it wasn't part of her mission. Suddenly, she thinks back to the time when Ougi said he was a teacher once.

Outside, Suzaku was catching up with Milly about what's been happening. He tells her that Kallen was spotted at the Chinese Embassy which makes Milly a little worried. Nina on the other hand, was continuing her research and had just given a conference. Just as Suzaku was going on about Lloyd who Milly was engaged to, Arthur the cat grabs Suzaku's precious pen that Euphemia had given him. Immediately he gives chase. 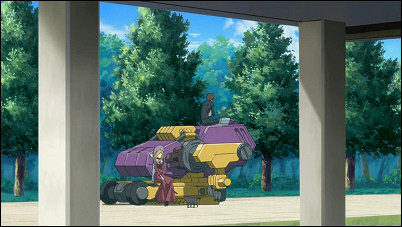 Getting back to Lelouch and C.C. who were now standing on top of a large container filled with tomatoes, Lelouch was trying to find out who gave the Geass to the Emperor and told Suzaku about the power. C.C. hesitates for a moment before revealing it was V.V. who done it. Just then, they hear Shirley approaching. Lelouch knocks C.C. into the container and closes it just as Shirley walks up to him. She wanted him to go find Viletta for her because she seemed to be being avoided.

However, when Shirley realises that it was a good chance for her to ask Lelouch out, Kallen appears in a costume and grabs Lelouch by the head. She was here to retrieve "Pizza Girl" back. Lelouch just manages to tell her to move the container away just before Shirley pulls him away from Kallen's grasp. The two have a little struggle until Suzaku and Milly drops by looking for Arthur. Things get even more out of hand when Weinberg arrives to take away the container of tomatoes. 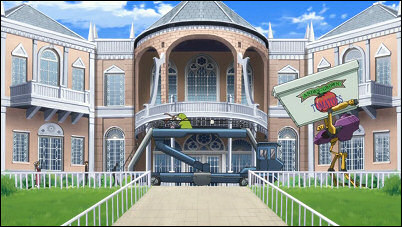 A chase ensues, as everyone chases their own target but Lelouch lags behind because of his low physical fitness. He changes his plans and rushes to a nearby balcony. Getting one of the students involved with the pizza event to look up, Lelouch commands him to give the signal to release fire extinguishing gas just as the container of tomatoes was being emptied together with C.C. Amidst the confusion, Kallen almost gets caught by Viletta too.

With the mess soon sorted out, Lelouch brings C.C. and Kallen to the roof where he learns that Ougi and Viletta had fallen in love with each other. He decides to use this to his advantage and threatens to reveal her dealings with the Black Knights during the time she had lost her memories. This could mean losing her current position and most likely the death sentence too. Knowing that Viletta now has no choice but to work with him, he brings out the wine bottle he and Shirley had selected for her and wishes her, "Happy Birthday". 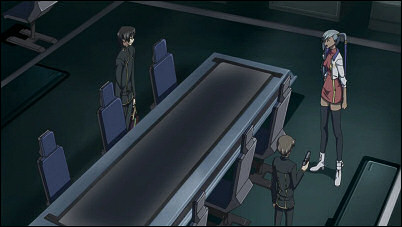 By now, Xing Kue had successfully retrieved C.C. and Kallen out of the academy as part of his repayment for Zero's help. All was going according to plan. Now Lelouch just had to sort out Suzaku who suddenly appears next to him on the rooftops. He reveals to Lelouch that he plans to work on through the ranks to become First Knight so that he will earn the privilege to choose and an area for himself, namely "Area Eleven" Japan. For this reason, he reveals that Zero will no longer be needed. With that, Suzaku hands over his phone to Lelouch so that he could speak to the new Area Eleven Governor. It was Nunally. 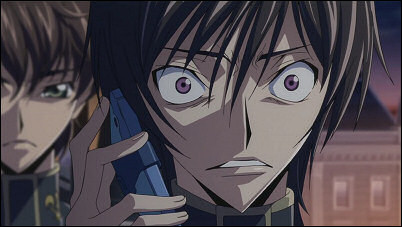 Next episode, "Operation Ambush on the Pacific Ocean". 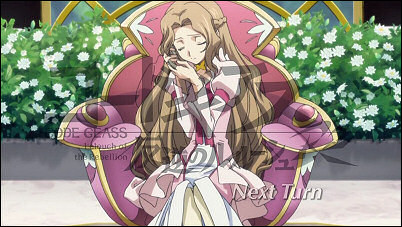 Another fun filled episode as expected. It actually resembles episode 21 from the first season when they were having the school festival. That episode also ended with a surprise for Lelouch. I laughed when Lelouch couldn't keep up in the chase, though. Same with the way Shirley smacked Kallen in that suit and what C.C. wrote on that box to the Emperor. She really loves that "Cheese-kun" doll, doesn't she?

Just when everything seems to be going well for Lelouch, Nunally appears before him on the phone. I wonder if he'll manage to rescue her successfully? Or maybe she doesn't want to be rescued if she's being put in charge of Area Eleven which will prove difficult for what Lelouch is trying to achieve. I think he'll have to pretend he doesn't recognise Nunnally as painful as it maybe. If he goes with the way Suzaku is planning things, he and Nunnally will probably have to experience some cruel events again and I doubt he will want that to happen. 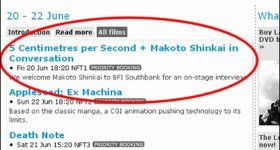 A bit late on this one but, I wanted confirmation first before I posted. It appears... 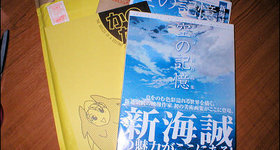 Finally got a hold of Makoto Shinkai's first artbook, "Sora no Kioku" and it wasnt...

11 May 2008, 12:21:14 pm
She's not really blind. All V.V. would have to do is reverse the trauma she received from witnessing her mother's murder. Doubt that would be too hard for him.

Also, Lelouch is fighting for Nunally so I really don't see them crossing paths later... Unless Nunally has her own ideal world in mind while Lelouch thinks her ideal world isn't right for her so, he continues to do what he's doing anyway.

9 May 2008, 3:09:12 pm
Worst case scenario: Nunally being forced to pilot a KF and being killed in action by Lelouch himself.

Even worse scenario: Nunally pilots the nigh-invincible Mark Nemo (from the Nightmare of Nunally manga).

9 May 2008, 9:45:51 am
I agree with you, LeLouch most likely will act that he didn't recognize Nunally even though it's must be very painful for him. What makes me keep guessing is, how good he could act to fool Suzaku?

And it's very interesting how Nunally become the governor. For some reason I couldnt help thinking that LeLouch might cross path with Nunally later on, and he might eventually have no choice, but to kill her.