The spiritual successor "Two Point Hospital" is now out. From some of the staff that worked on the original Theme Hospital, the game brings back most of the gameplay, humour but also some new changes that add new challenges. Might want to give it a go before playing the classic again!

To save you the hassle of going through all these technical tweaks, try Corsix-TH instead. It is still in its early development stages so you'll spot the odd bug but from what I've tried so far, it is easier and a lot more stable than using these tweaks and supports today's modern screen sizes. No more funny colours and blurry graphics to look at!

It's very simple to setup. Install your copy of Theme Hospital or simply copy the whole "HOSP" folder from the CD. Now install Corsix-TH and let it know where you copied the folder. Then you're ready to run the game!

Would be nice to have the cutscenes ported over too such as the board and opening animation but, oh well. Keep up the great work, guys! =)

Been feeling like playing Bullfrog's classic "Theme Hospital". It really is a brilliant game despite being over 10 years old and I highly recommend you try it if you haven't already! You run a hospital trying to cure humorous fictional diseases like "Bloaty Head" by popping them like balloons, "Slack Tongue" or "Invisibility". Then there's the receptionist announcing the odd lines over the intercom in a sarcastic voice like, "Patients are asked to be patient," "Patients are here at their own risk," or even "Patients are reminded not to die in the corridors" every so often. Some hospital, eh? The game still plays (and looks) amazingly well for its age.

However, it doesn't look like it's getting a remake any time soon even though Theme Park got one on the DS. I tried getting the Playstation version via PSN but it's very poor, lacking music and has poor controls.

Eventually I decided to try and get the more superior PC version but the catch was, it's so old Windows Vista and later isn't supported. That said, there are ways you can get the game running if you look around such as using the legit DOSBox emulator. There have also been people who have suggested installing the legit Windows XP Virtual Machine provided by Microsoft.

Or, if you want to avoid the hassle of installing more software just to get Theme Hospital running in Windows 7 (or perhaps Vista too), here's how to get it up and running on today's PCs. 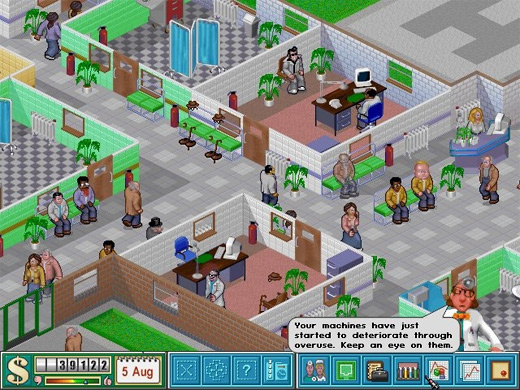 Get a copy of the game and copy the whole "Hosp" folder to somewhere on your drive.

Open up Hospital.cfg in Notepad - easy way to do this is run Notepad then drag the file into it. Edit the line... 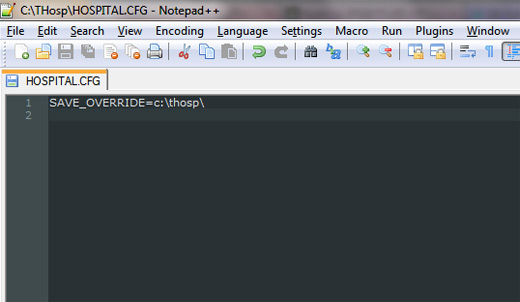 And change it to wherever you saved your folder. The easiest way to find the text you need is open up the folder, click in the folder's address bar and copy what's there. 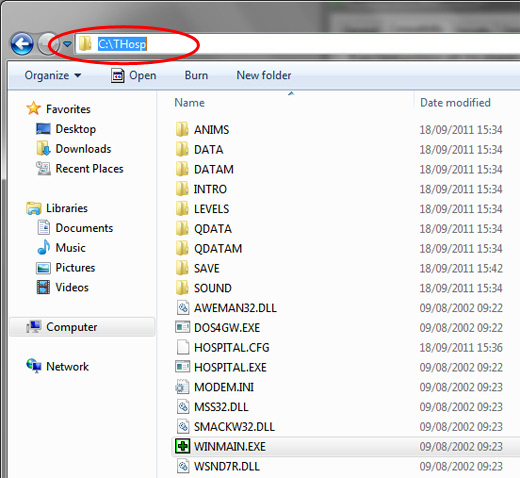 Now right-click the Winmain.exe and go to the Compatibility tab. Choose to run in Windows XP mode then check every setting underneath apart from the DPI box. 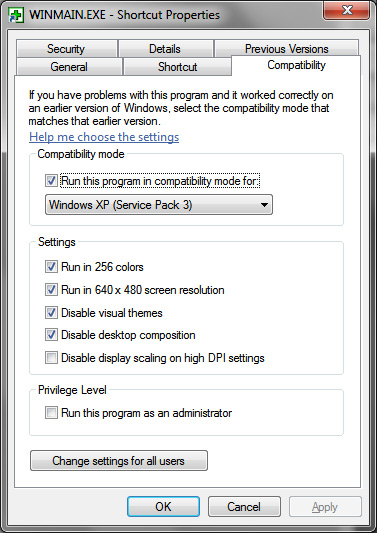 Now you can create a shortcut to Winmain.exe and you're ready to play!

Oh, you might have to adjust your monitor too. I had to on my widescreen which the game was never designed for but it scales just fine.

If you still have problems running the game, try setting the compatibility mode to Windows 95 instead. Your mouse cursor will probably lag and to fix this, you'll have to... 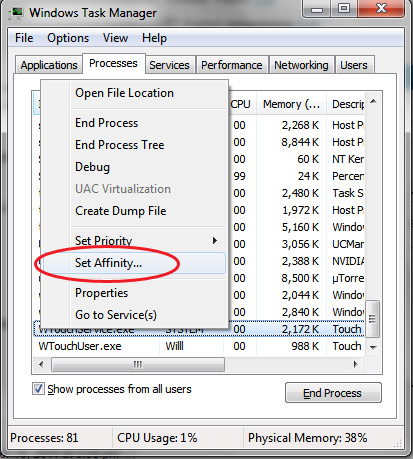 This should work for Bullfrog's other classics such as Dungeon Keeper and Theme Park but I haven't tried. In any case, hope you enjoy the game! 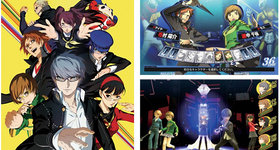 So, you've all been expressing how much you wanted a Persona 4 Portable after... 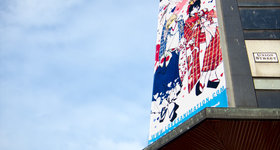 13 Jul 2013, 4:12:06 pm
Done all this but it still won't save had to change compatibility mode to windows seven to make mouse work though

7 Dec 2012, 1:40:46 am
Have you opened the config file in the folder where TH is installed? There should be the following line in it which points to where save files should be stored:

See the reply I wrote for Ashley.

8 Nov 2012, 11:25:08 am
There is an easier way, you know...
Instead of using DOsbox, you can just use CorsixTH (open-source clone of TH). All you need to do, is have the old game or a demo(installed) and then install CorsixTH and run the game. Check it out!

To fix the graphics all you have to do is open Task Manager go to processes then find exporer.exe run up the game and then tab out to the task manager then end processes on explorer.exe. now tab back to the game and it should be all good :D.

please note you will have to run explorer.exe back up again if you want to gate back to your desktop, most of you proble no how to do it but here it is, just go to task manager look for applications then look at the botim of the window there is a button saying, New task go to this and then tipe explorer.exe in to it and your have your desktop back. hope this helps :)

29 Aug 2012, 9:18:39 pm
I wouldn't recommend anyone to end explorer.exe if you're not familiar with using Windows. You could find yourself stuck with no interface and end up force shutting down your machine =/

26 Aug 2012, 6:35:02 pm
The loading and running works perfectly but I cant get it to save. If I go to file and save, whilst the game is on pause, and click a slot. Then when I unpause the game it says "Error, game could not be saved"

22 Jun 2013, 5:07:36 pm
I had the exact same problem, spent hours trying to work out why everything would work but not save, it was a simple mistake - that is I had entered "SAVE_OVERRIDE=C:\HOSP" instead of SAVE_OVERRIDE=C:\HOSP\ - that one single backslash made the difference.

18 Aug 2012, 11:56:52 pm
I found that when you are typing the override part, when you save as...save it to the desktop, then delete the original CFG file then drag the new one into the HOSP file, this should work. Hope this helps!

16 Aug 2012, 6:22:08 pm
Graphics were odd before. This fix makes the game look fine and work perfectly. How in the world do you computer geniuses work this stuff out?! Many thanks!!

15 Aug 2012, 4:14:20 pm
mouselag problem with vista still, have scanned every forum have tried everything and still lagging, tried dosbox but it says the game is not a dos application which i know it is,, have spent hours and hours gunna have to accept defeat :(

22 Jul 2012, 7:23:58 pm
I should probably add, when I click the winmain shortcut in either 95 or xp settings, all that happens it my mouse goes multi-coloured,gains a circle underneath, and my desktop just become enlarged and the colours go funny. :S

The enlarged multi-coloured desktop is normal because back in those days, games were produced for "tiny" screens and didn't have enough colours to display photos with wide range of colours. So as soon as you switch to the smaller colour palette, it tries to refer to the wrong colours and ends up looking really messed up ^^;

4 Jul 2012, 8:39:10 am
Thank you so much! I had figured out how to get it to run, just not to save/load! I just ended up moving the folder right onto the C drive so that it was exactly where the Hospital.cfg file was directing it to save to, and it worked! The only thing I did different is that the game would freeze when I'd try to run it with Compatibility features, so I just left them off and it works fine now. Even was able to copy my save files I kept from my old laptop, and it loads and plays perfectly! Thanks!!

there is no text in the folder hospital.cfg that says save _overide.

2 Jul 2012, 9:09:53 pm
It looks like you've only chosen a medium install of the game. You'll have to install the full version to run the game without the CD and I think you have to choose custom install when you're installing to find that option. Or you could just copy the whole "Hosp" folder off the CD onto somewhere on your hard drive too! After that's done, you should be able to add the extra line in yourself so that file looks like this...

16 Apr 2020, 4:48:40 pm
I just did this for my copy of TH on windows 7.
Mine is the 'sold out' vista compatible version and this particular fix i'm replying to sorted everything out for me.

set to run in 256 colours
also set to run in 640x480 resolution
nothing else, just change settings for all users.
NOT running in compatibility mode

i also made the changes to the CFG file and saved it to the desktop, deleted the original and then used right-click copy, right-click paste back into the originals place.

19 Jan 2012, 6:57:21 pm
I have just tried this, it worked before hand just lagged and skipped. Now it wont work at all. I have undone everything this article has said to do and still wont work. Wont load. Thank you so very much