It feels like a while since I wrote something for this blog.

You will probably have noticed I haven't been writing for my blog much lately nor have I done any more translations. The reason behind that is that I am very much preoccupied with my full time job these days. That said, I still play games and watch the odd Anime show... Just not as much as I used to.

For the very same reason it's been a while since I went out for a photo stroll and practice all the photography techniques I've been reading up about here and there. 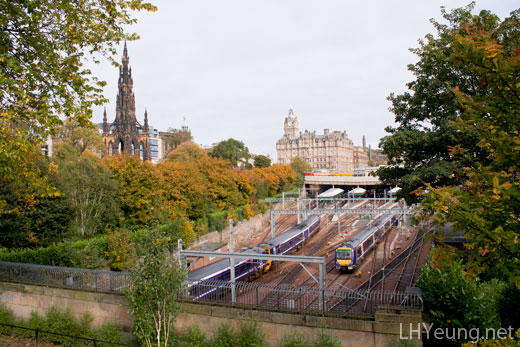 However, I happened to have an extra long weekend this month off work so there was time to go on one again. I could probably go during the weekends but I would probably end up with too many people asking for photos or diving in front of the camera...

This time I decided to try outside of my hometown for this year's autumn photography although I was pretty sure it's still a bit too early to catch some nice shades of colours. 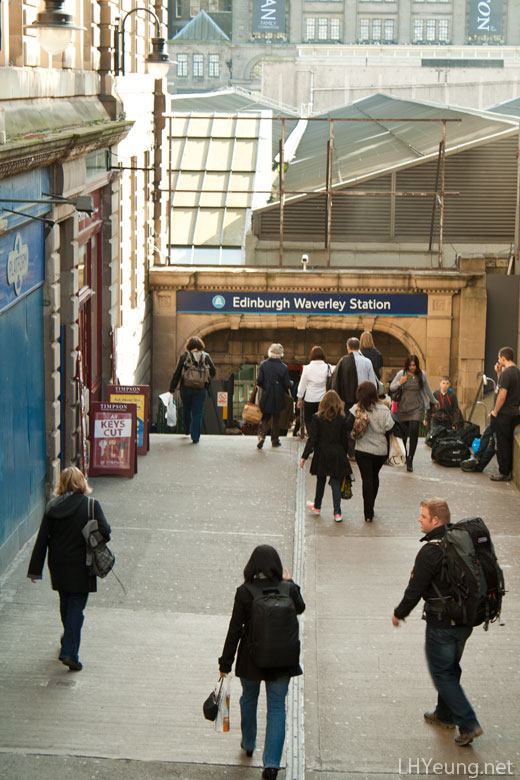 I decided to choose Edinburgh, the capital city of Scotland because the last time I visited was when I was a small boy and didn't know how to appreciate the surroundings. 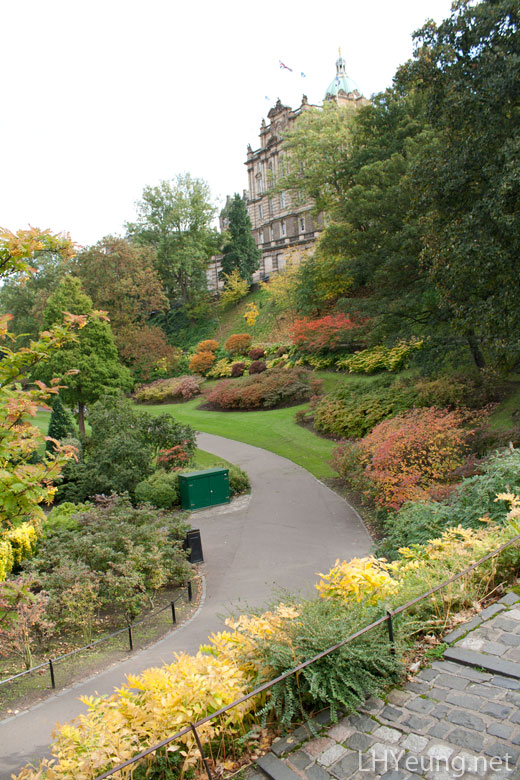 It wasn't exactly a great day. Cloudy as it usually is in Scotland but I think that just increases the challenge a little. Going to need a very steady hand or pose for those sharp, small aperture shots.

I didn't manage to explore very far because I arrived pretty late in the afternoon and spent most of my time near Waverley station one of the tourist spots. 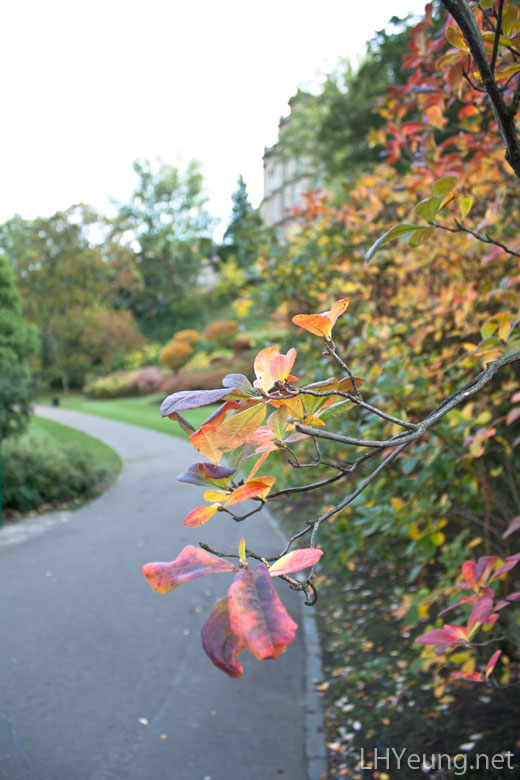 As you can see, early October isn't the time for those shades of colours although some leaves were already turning a nice bright red colour. 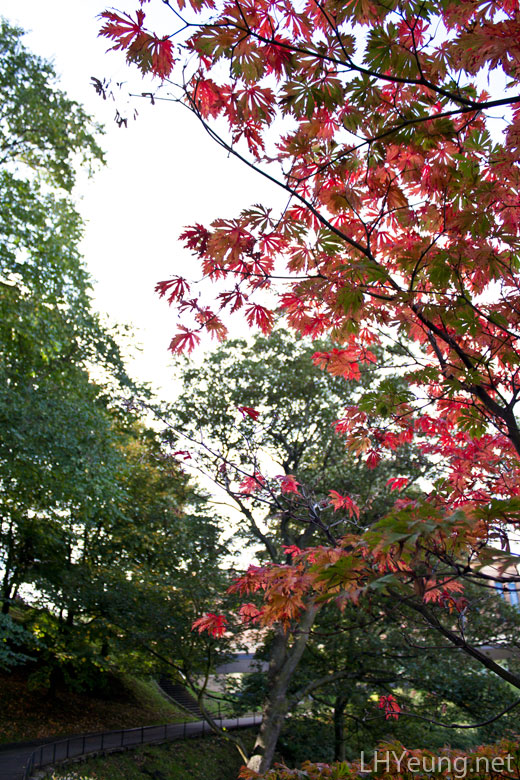 Funnily enough I saw someone use a huge 600mm zoom lens with extenders attached to it. It's the kind sports photographers use at football and other sport matches so I think the guy was just showing off.

You really don't need that kind of set up for a portrait shot although I could be wrong ^^; 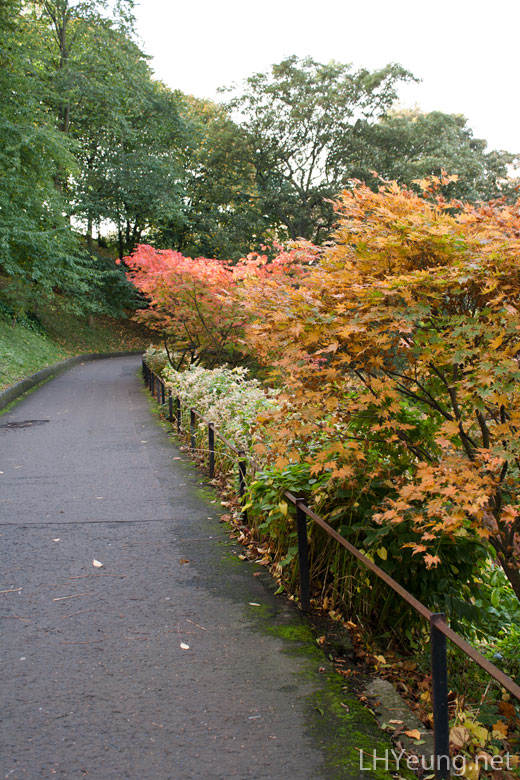 Just a quick stroll around the nearby park looking for any interesting spots to shoot. This place hasn't changed much from the last time I was here and that was a looong time ago as I mentioned earlier. 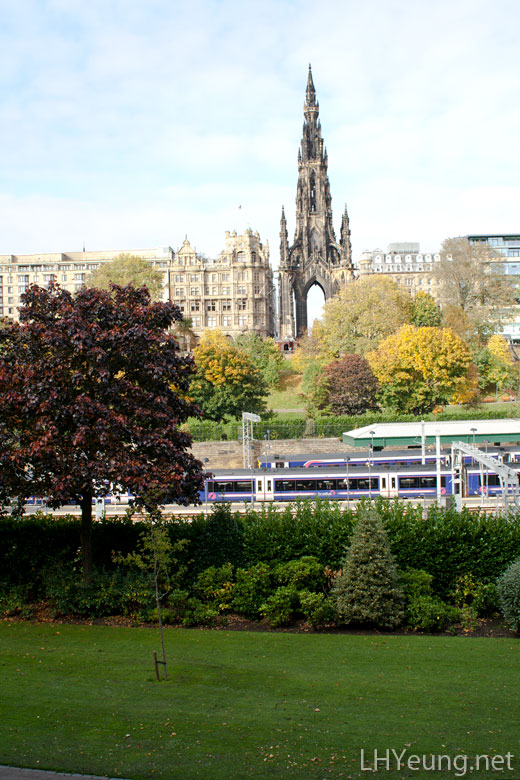 Few minutes walk away from Waverley Station. A short spell of bright sunlight here helped light up the yellowing leaves here but probably too much detail in this shot.

One of the tips for autumn photography I read was to shoot the leaves when the sunlight is golden during sunset or sunrise. It makes sense since photography is mainly about angle and lighting although it seems people enjoy heavily "Photoshopping" their shots now.

At these angles I kind of wish the camera body had a swivelling LCD screen but not many Canon DSLR bodies have them. 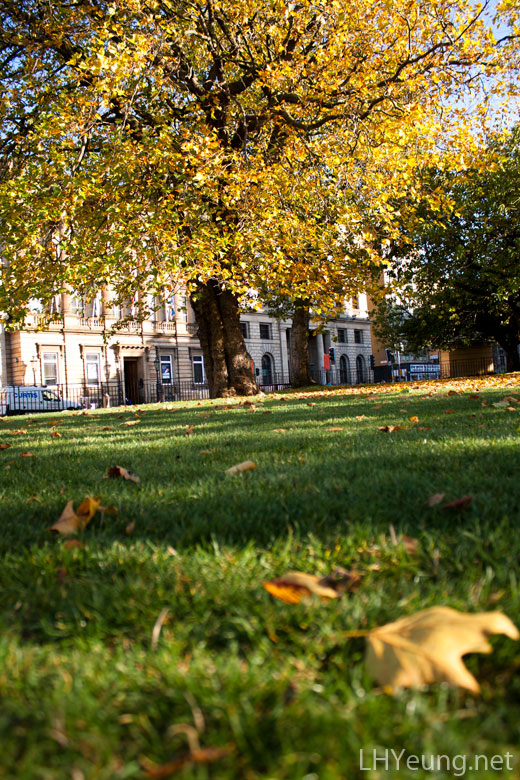 Had a quick lunch before I continued my little trek and spotted these Scotland version of "Gatchapons". Nothing Japanese here... 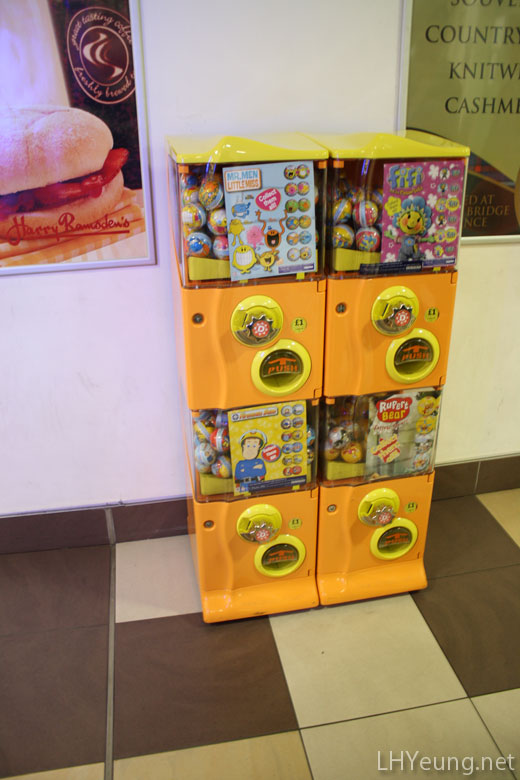 I was going to go take a look at how well they managed to maintain the parks around Edinburgh but instead I got side-tracked and decided to go up Calton Hill again, another tourist spot.

I think you can go up that cliff in the distance. 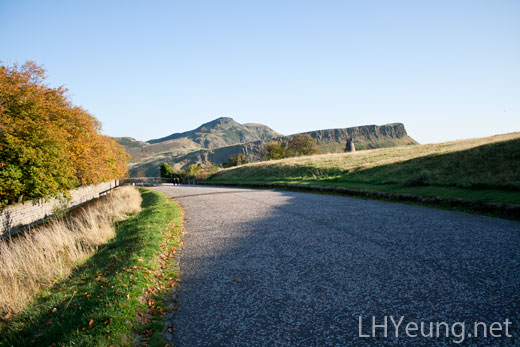 Quite a view here.

There's a few paths running up the hill and there's the Nelson Monument in sight. 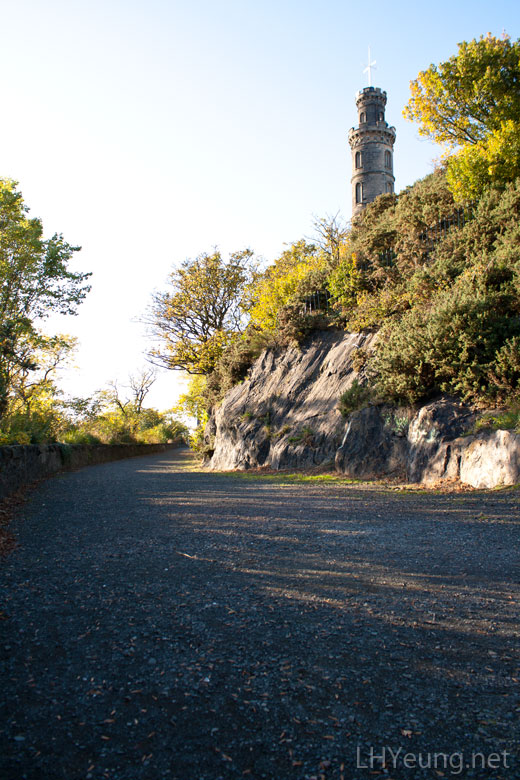 Quite a number of paths you can follow, not very steep. 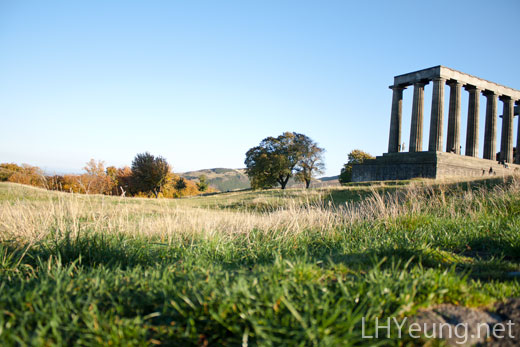 The National Monument on the left is pretty popular with the tourists. 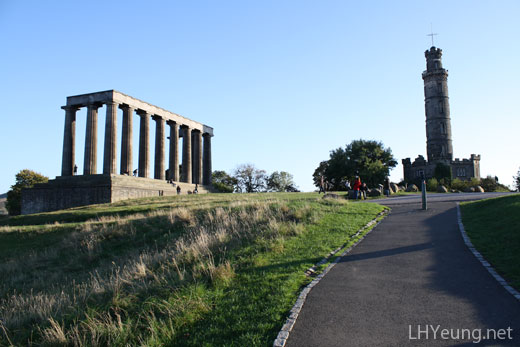 I wonder if anyone actually tried sledging in the winter here... 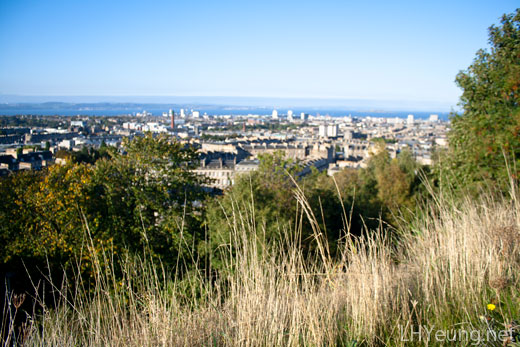 The hill overlooks the Firth of Forth.

It was getting late but since I was here, I thought I'd wander a little longer for one or two night shots. 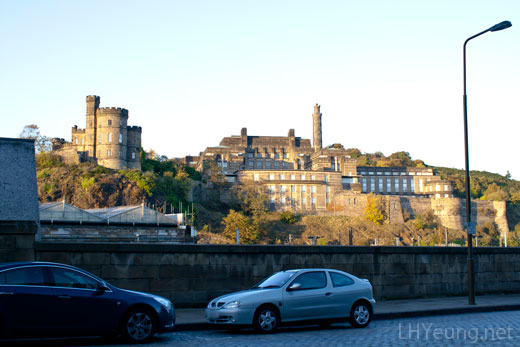 The hotels around the train station must cost a lot. 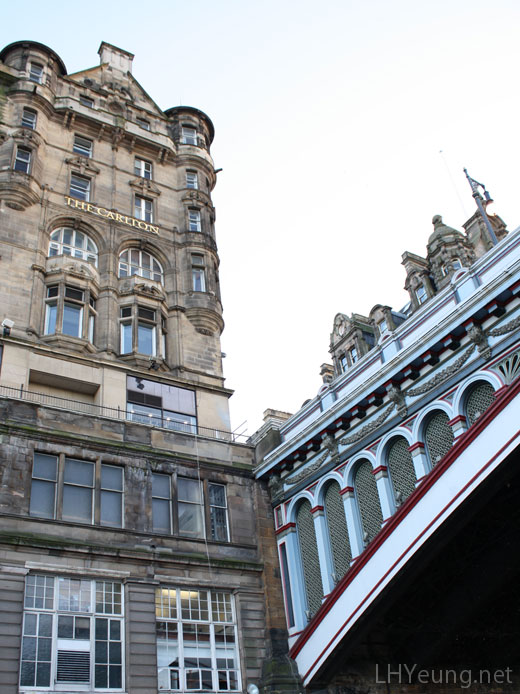 Another sudden spell of sunshine over the top of Waverley Station. 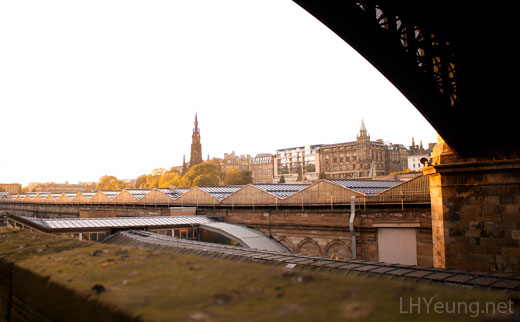 This shop reminds me of all those little stores in Hong Kong. Probably unofficial goods. 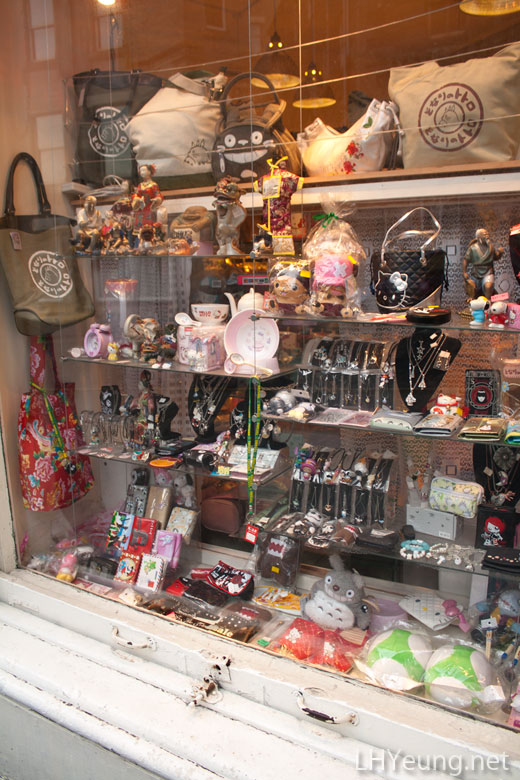 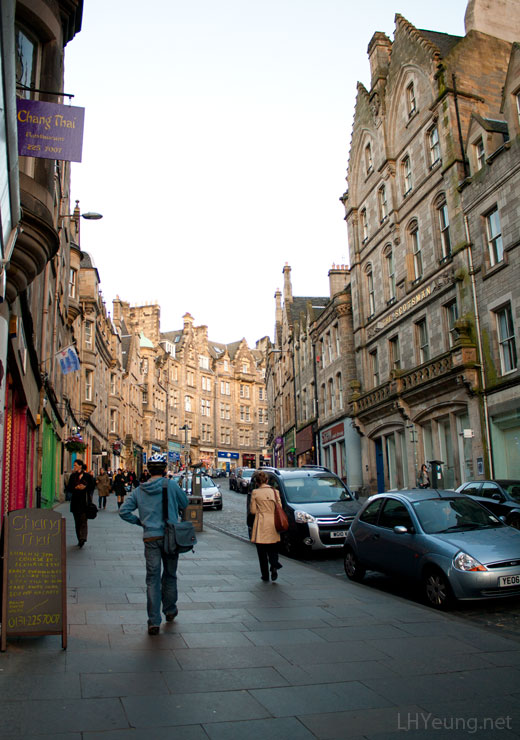 There's lots of these dark little side lanes but you'll find quite a few people use them. 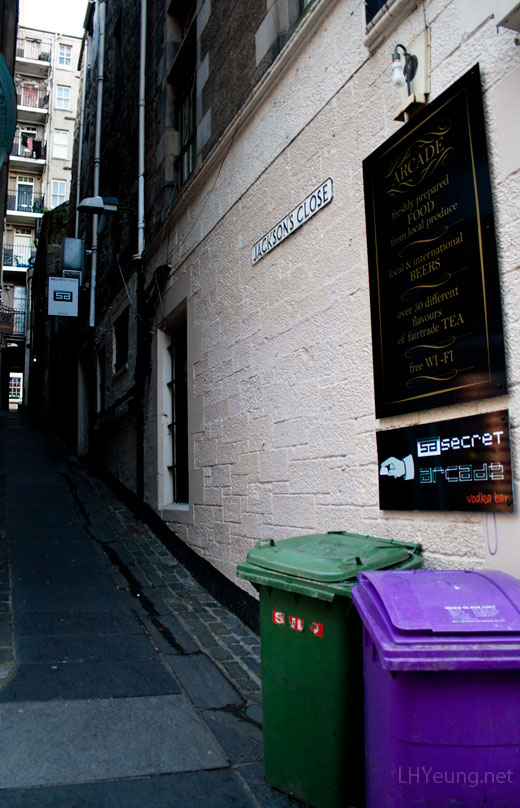 Quite a cold and windy afternoon so it wasn't easy to hold the DLSR still and I didn't want to shoot at high ISO... 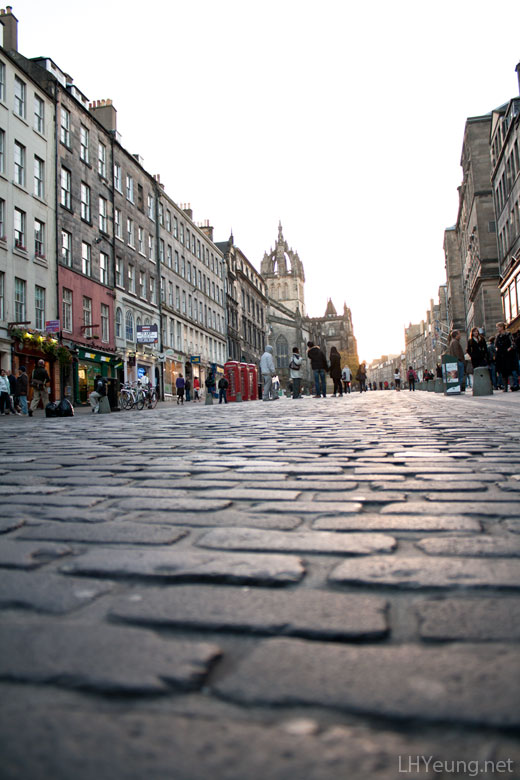 This looks like a nice place... Whatever it is. 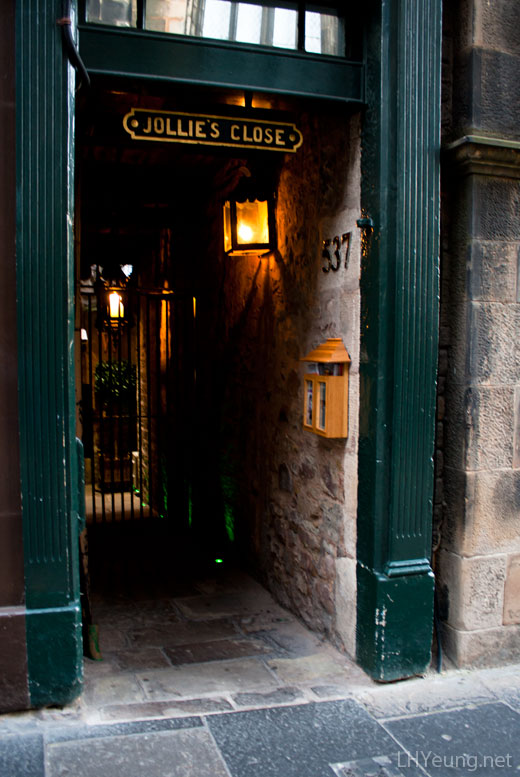 Lots of high spots around here. I can imagine how busy these places end up getting during the annual festive times. 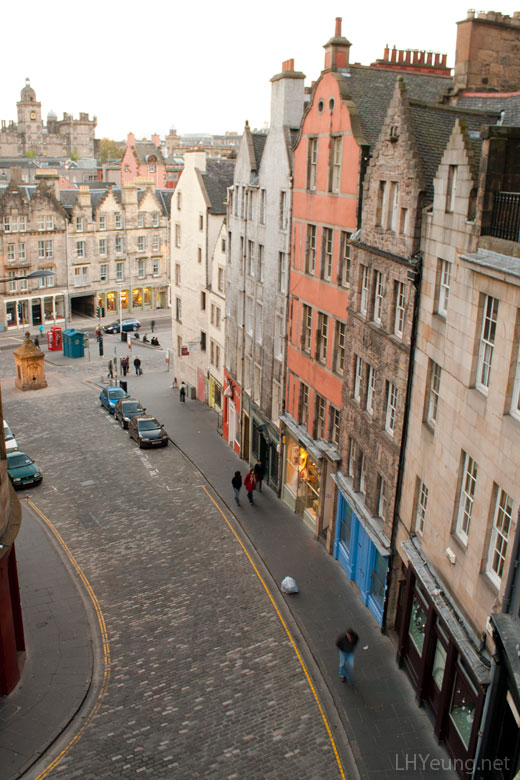 Waiting for it to get darker now. 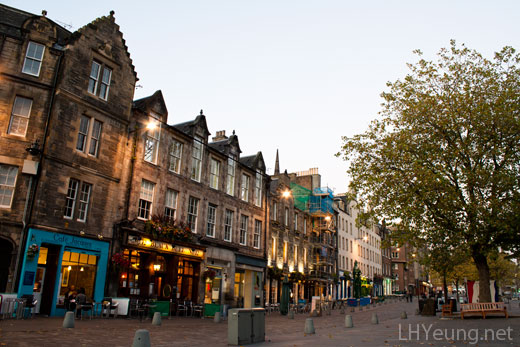 And how could I leave without taking a shot of Edinburgh Castle?

It wasn't dark enough yet and the lighting didn't look very good at the time so I decided to go for an HDR shot to bring out the highlights and shadows that normal photos can't. Unfortunately, my manual focus wasn't on the spot so it turned out blurred if you enlarge it.

I remember how one of the Hong Kong actors, Sunny Chan arrived in Glasgow and said when he thinks of Scotland, the image that comes to mind are castles and sheep ^^; 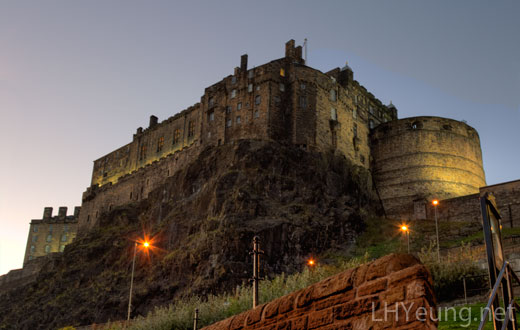 It was time to head back. Saw this cow sticking out of a pub... Suddenly I'm reminded of Atlus' first and upcoming PS3 game, "Catherine" (NSFW) - dark but no sheep here. 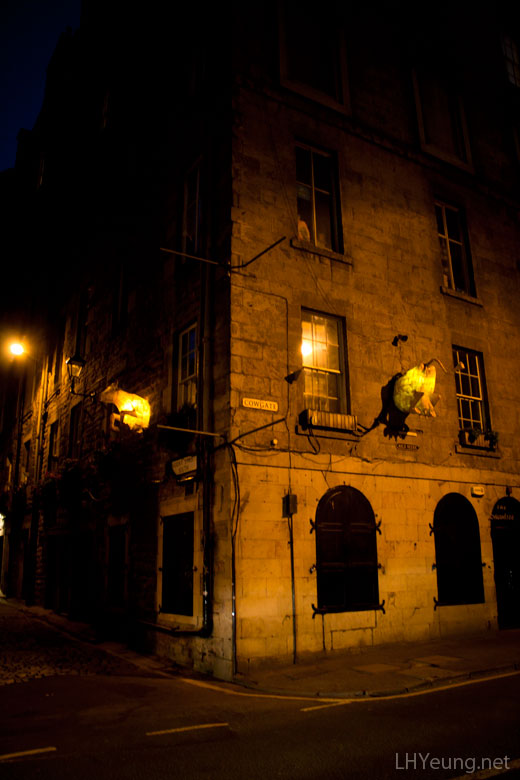 And here is where I bring out the tripod and turn on tunnel vision to ignore all the curious gazes. Got a fair bit of glare because of the lights pointing down at the lens but other than that, it didn't turn out too badly with the long exposure time and small aperture size. 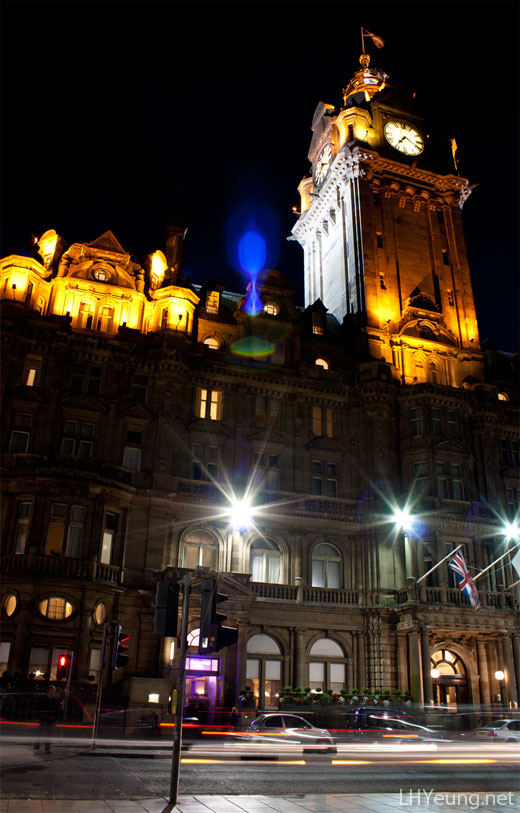 In the end I think this turned out to be more of a tourist trip but I think I managed to get some nice shots. Someday I'd like to see the autumn scenery in Kyoto although I kind of doubt it will look as great as it does on TV. Still, I want to see that and the cherry blossoms in person!

As I mentioned earlier, I will probably be too busy to write anything for this blog but feel free to drop by again some time in the future! 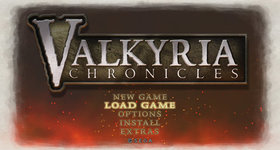 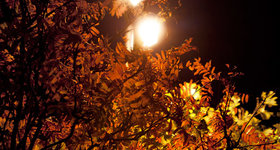 This was shot before the little stroll in Edinburgh. I came across the scenery on the...

What does the national monument represent?