The latest Shin Megami Tensei game, "Strange Journey" tells of how humans have reached the point where the population has exceeded the 70 billion mark but without resolving the many issues that damaged the natural habitat of Earth, an odd phenomena has occurred in the Antarctic. A giant magnetic hole has appeared and is slowly expanding, absorbing everything in its path. While providing a cover up to prevent any more public panick, the UN has dispatched a team as part of Operation Schwarzbirth to find out what's inside but things don't go well at all.

Very typical save the world against evil storyline so far. 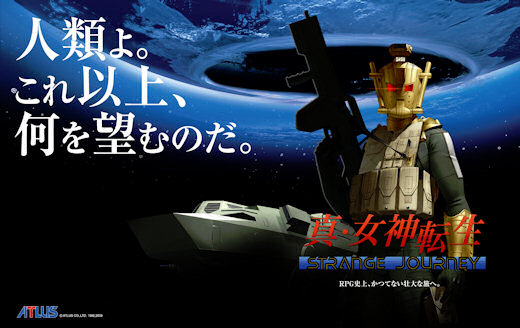 At the start of the game, there is a quiz with a number of "case studies" that determine how your stats develop as you level up. I ended up being determined as an attack class. There's a fair amount of dialogue to run through but fortunately you can hold down X and A to skip through it quickly. There's even a bit of choice making during the main dialogue although the side ones don't seem to matter much because they end up being repeated.

Your ship, The Red Sprite acts as a kind of base where you can chat with crew members, heal, stock up on items and add new "apps" to your Demonica suit. The general cycle is a mission is issued and you must leave the Red Sprite to carry it out, spending most of your time dungeon trawling with the odd trap to delay you from reaching your goal. Rare materials are scattered throughout the dungeons and you can gather them to create new weapons and upgrades that let you find invisible doors or unlock them.

Dungeons are presented in 3D from a first person perspective and an indicator shows when your next random encounter will be. It kind of increases the tension as you play because you don't know how many steps you take will end up with another battle. Not to mention save points are scarce and essential healing costs a lot of money so it can be quite a harsh game but, MegaTen titles are known for their difficulty unlike the spinoff Persona series.

As for the battle system itself, many of MegaTen's trademarks remain such as befriending the Devils by talking with them and giving them gifts. There's quite a varying bit of dialogue which kind of makes it difficult to acquire some Devils - Some won't even talk to you depending on the class you ended up with at the start of the game. You can have up to three Devils in your party and they have fairly much the same weaknesses and strengths as before. You can still fuse but the interesting thing is not all Devils appear in their true form at first. You have to encounter them a number of times before you can see them well enough to speak with them.

Atlus seems to have given SMTSJ the bare minimum treatment in this factor.

Pre-rendered videos are bland looking and of the very few that there are, you'll see one video used repeatedly after every dungeon. The in-game graphics don't look any better with the ugly looking first person 3D dungeons. Perhaps this was just to keep the retro MegaTen feeling. Menus very much resemble the old low resolution NES days and the 3D dungeons actually look flat. On the other hand, the 2D backgrounds are fairly well rendered. Kaneko's Devil designs when viewed from the database still look as great as always.

I'm quite a fan of Shoji Meguro's music but this time, I don't really like all the soldier shouting in the soundtracks this time round - It's so loud it overpowers the instruments although if you have a decent pair of earphones/headphones with bass, the atmosphere can be pretty good. However, just with the sound effects, there seems to be very few in number. Perhaps they decided to allocate more time to the portable version of Persona 3?

Shin Megami Tensei Strange Journey fairly much feels like your average dungeon crawler but with the MegaTen touch to it - Long winded dungeons where healing can cost a fortune if you don't have the right Devils, flexibile fusion system and some challenging bosses when you need to get the strategy just right.

Fans of the series should enjoy this but when compared to the modern day titles such as its own Devil Survivor or, the recent Persona series that introduces a life sim element into its titles, it could use some visual revamp and some more interesting new features. 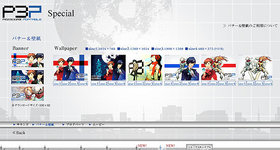 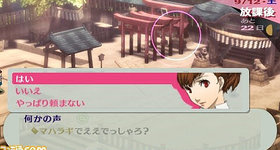 30 Mar 2010, 6:30:20 pm
Yes but the way the story is presented in SJ is worse than a visual novel. If the visuals varied a little more then it wouldn't feel like you're wading through lots of text. Visual novels at least have some well rendered backgrounds to look at, voice acting and varying portraits.

"There’s a fair amount of dialogue to run through but fortunately you can hold down X and A to skip through it quickly."


? in an RPG, especially a megaten, we must read the story normally am I wrong? lol

ps: they are all great anyway!!! except devil sumoner :P

Besides, I think 10 hours or so is enough to experience what a game has to offer when all the features should have been made available by then.

15 Oct 2009, 6:28:39 pm
Heh, I always thought of this game as SMT: Etrian Odyssey. Judging by the pictures and videos I've seen so far, that's what it looks like and your review seems to confirm it, which is fine since I'm a huge fan of the EO games. But yeah, people that enjoyed the life sim portion of Persona/DS may be turned off.

Kinda sad to know that you didn't like much of the music. There are people around gaming forums that were unimpressed by it. :\

15 Oct 2009, 4:17:24 pm
Hmmm. I'll play this anyway when it gets localized, but I was expecting it to be at least on par to Devil Survivor, for the menus and everything. Maybe the animations of all the Demons took much space? Oh well.