Episode 11
The Gathering of the Shaman

Natsume was out with Touko to help her with the shopping. Feeling that he's the one that's always being looked after, he wishes that he could help someone too one day. Just then they notice a wounded Youkai falling from the sky but it was too late by the time they caught up with it in the forest. Another Youkai in the form of a giant head bursts out of the bushes and devours it leaving a trail of blood. Hiragi and Natori appears before Natsume and he learns they were after it. He is invited to help him out and attend a gathering where both Youkais and people with similar abilities as Natsume gathered. Hoping he could find someone he could share his pain with, he decides to go and comes across an old woman named "Nanase" who could also see Youkais. She was the secretary of a powerful Youkai hunter Matoba and offers them a pot to help seal the big headed Youkai.

The Young Man of the Abandoned House

Natsume is dragged along to an abandoned house by his friends Nishimura and Kitamoto because their class president, Sasada believed there was something strange there. However, after searching for some time, Natsume finds nothing but a young boy locked up inside in a box who runs away immediately after being released. He drops his student ID and Natsume decides to try returning it to him. When he asks around, he learns the young boy Kai Ishio was being chased by something. Natsume soon realises he's been blaming all his troubles on the Youkais but, it was really himself that was the problem, never wanting to leave other's problems alone. He wanted to help Kai but little did he know about his secret.

Natsume learns from Natori that Kai was really one of many Youkais lured to search for a well where other Youkais were sealed. Natori had accepted a request to exorcise him but, Natsume wasn't going to let him because he still considered Kai an important friend. Eventually, he decides to ask Taki to help find the well for him and almost gets caught in Natori's trap back at the mansion. When Kai rescues him and learns it was Natori's doing, Kai decides to go hunt him down for hurting Natsume. This reminded Natsume of Natori's words, whether humans or Youkais were more important to him. Natsume rushes out to try and stop him. He manages to reach Natori before Kai does and learns Kai was a water god from the mountains who became lonely when people forgot about him. So lonely that he eventually heard the cries from the well and decided to go free them. However, he had forgotten all about it when he disguised himself as a human and enjoyed himself. However, when Kai finally catches up with them and learns Natsume was a friend of Natori's, he resumes his search for the well.

Just when this show was becoming one of the best of this season (together with Kemono no Souja Erin) it ends! Even though I haven't watched the first season, it's been great. I don't know why... Maybe it's the balance between the serenity, comedy and sudden scary Youkai moments. I'm going to have to try and find time for watching the first season.

It's been a very well presented show but, not very well rounded off I feel. It kind of jumped a little too quickly to the the point where he had to make a decision between choosing Youkais or humans. They could probably have spread that idea out a bit longer. 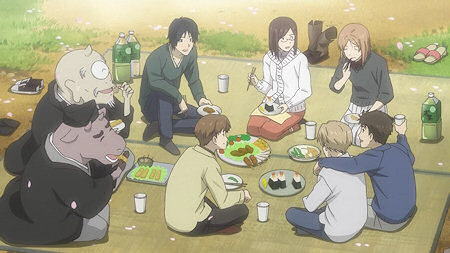 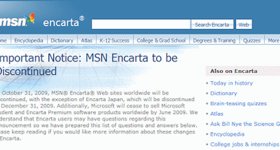 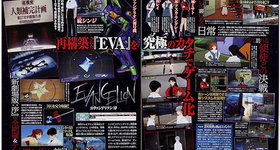 From June 4th, you can experience the Rebuild world of Evangelion on your PSP or PS2...