Akane receives a call from Keita while she is off to work at Osora Bank. She doesn't notice the car that was following her. 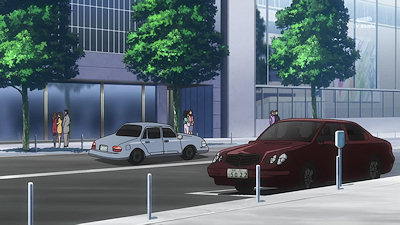 As she goes about her work, she is approached by tall large man who suddenly grabs hold of her hand. He senses a great flow of Tera energy from her yet, she had not agreed to a contract with anyone yet. It was odd. A young, blonde haired girl runs up to the man, clinging onto his arm to pull him away asking him to hurry and buy that limited edition Dolfar game for her at Akiba. The man apologises for his manners, claiming he couldn't help it seeing such a beautiful Japanese woman before walking away. 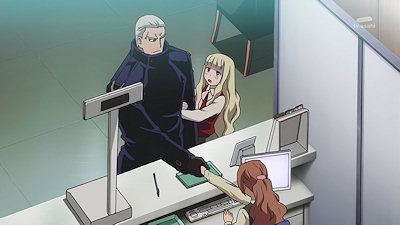 After seeing them leave, Akane talks to her manager and leaves to meet Keita. The man tells the driver to follow her, keen to know where that trace of Guardian energy on her came from.

They soon meet up at a cafe where Kuro couldn't decide what to eat with so much delicious looking choices on the menu. As food is ordered,  Keita explains how they had escaped from school after Kuro defeated his teacher. Now that he and Kuro had a contract between them, she asks him to fight with her against her brother. Keita angrily gets up and slams the table, wanting no part in the chaos and attracts a lot of unnecessary attention even though he had tried to keep Kuro quiet. 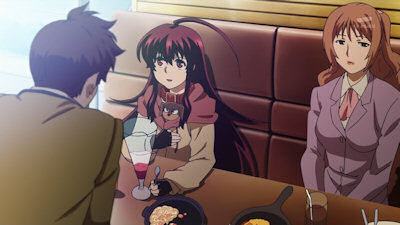 Meanwhile,  Tsubota had been transported away to extract whatever information he had managed to found out about the Guardian. Hiyou wasn't surprised it was Kuro who had defeated him. He proceeds to use Tsubota as an experiment to see if a contract can be created using a different organ other than exchanging the heart. 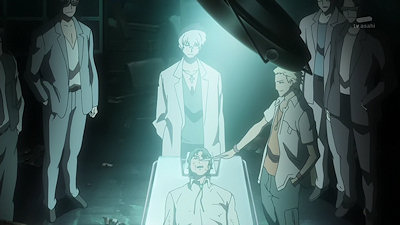 At the same time, a woman named Yuki who resembled Akane, was getting impatient that her sub root wasn't found yet. She complains to Reishin how useless his subordinates were, throwing the document Kuraki had brought in for her to sign onto the floor for him to pick up. She has allocated so much of the Kaionji Organisations resources to them. 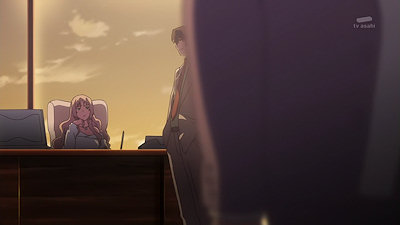 It was getting late. Kuro calmly tries to convince Keita again while Akane was paying for their huge list of food inside. She lets him know the contract can't be undone until the contractor dies and that both he and the Guardian share the same heart. If either of them didn't trust the other then there is going to be trouble. However, Keita's attention wasn't with her. He had noticed the car that was following them and immediately pulls Akane away as she leaves the building.

They run but are surrounded by bikers. They were Tribal Ends and without Keita's trust, Kuro is no match against them. Just as Keita and Akane were about to be finished off, Steiner appears to save them. It appears they were also after Kuro and wasn't going to let anything stand in their way. With little effort, Steiner fends off the Tribal Ends who had refused to back off. 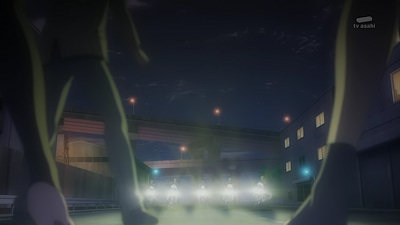 Akane thanks them for the help but Keita stops her. He knew they had other intentions. He punches Steiner for trailing Akane and getting her caught up in the mess too. Excel considered it a challenge. 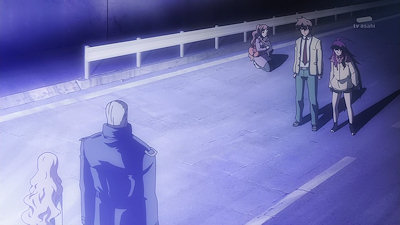 And the Kuro abuse does continue. They make her character way too cute to be treated like this. "Sea of tears" in jail? 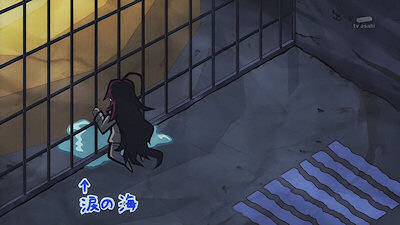 Funny they didn't let the characters say out their moves name fully before being hit for once.

Good to see more of the plot being revealed and it looks like there's three sides competing here. Kuraki working for Yuki appears to have the same goal as her - trying to become the Master Root. Didn't notice it before but, if he didn't wear glasses he would look like Keita I would imagine. Funny in the Manhwa Keita was originally supposed to be a programmer and here his "evil" Sub Root appears to be him. 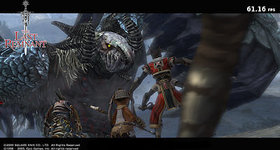 SE had released a benchmark program for the PC before FFXI was officially released... 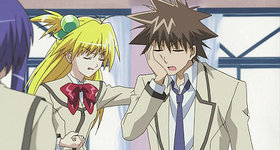 Episode 5 Summary Their Relationships at the Dating Stage?! The guys at school...