Picked up Okami, a port of the PS2 action game. I heard many good things about this game and since nothing else interesting was coming out for the Wii for some time, I decided to try it out. HMV sells the game with an alternative slip cover over here but, didn't find out about that until after I bought this. The American boxart had a very faded IGN logo on it... Whoever spotted that must really spend time admiring boxarts just like the time with Super Mario Galaxy. 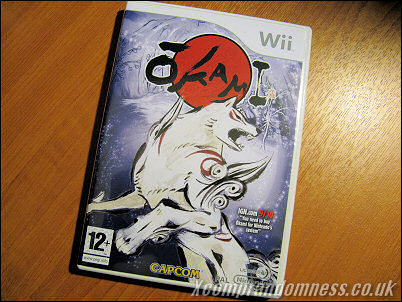 The opening story was an interesting one, resembling the kind of mythical stories one might expect to hear from old times. As common as the introduction appeared, it was still quite a moving story with the Shinarui helping the hero Nagi and ending up sacrificing itself. 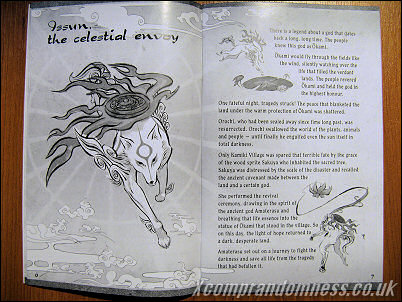 Rather than button bashing, a large part of the game involves using a magical "Cosmic Brush" to draw and needless to say, the Wiimote is now used for this. This can take some getting used to because Okami can expect some pretty precise drawing from you, in particular straight lines to perform the "Power Slash" whereas in a game like Trauma Centre, you can usually get away with drawing approximate movements. Fortunately the game eases you into this although I got pretty stumped over the first brush stroke. I tried so many times, following the red guidelines on the screen but never managed to get it work until I finally drew one quick large line across the stone to slash it in half. 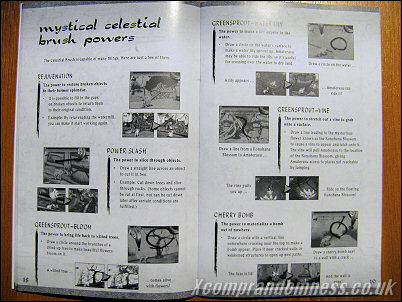 There are a number of different brush strokes, each used for a different action and sometimes for solving puzzles. Every time you want to use the brush, time pauses and you can take your time to draw the symbol you need which is great considering the difficulties I mentioned above. This is also the fun aspect of the game as the cursed land comes alive each time problems are resolved with the brush.

For example, after the sun sets the environment begins to get dark and more monsters roam around. You can then draw a circle in the sky to make it daytime again or even a moon for the opposite effect. There are also missing parts to fill in to fix things as you travel around the world of Okami. You can even splodge monsters with ink to blind them! Every enemy has a different weak point which helps add an extra degree of challenge to battles. 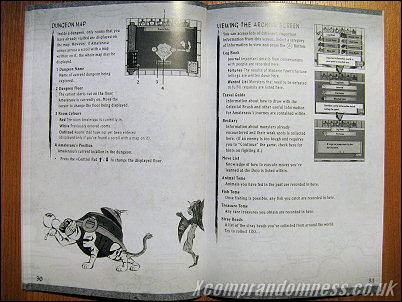 Another great thing about Okami is the number of side quests available. You can spend the time running around the field reviving plants and helping people to gain "Praise" or just go right on with the story. Praise act as skill points for boosting Amaterasu' various attributes such as health so it's kind of like experience points in an RPG except maybe a little more flexible. Money can be saved up and items can be bought to aid you on your journey. A handy logbook keeps everything recorded although the descriptions used could be better.

With 480p and widescreen support, the presentation is certainly exotic with its beautiful brush art 3D environments with all the Kanji intact. Just watching the black cursed landscape bursting into colour with cherry blossom petals flying everywhere is mesmerising enough! Music on the other hand is also just as oriental only, the game uses some strange sounds for the dialogue which can get pretty irritating. 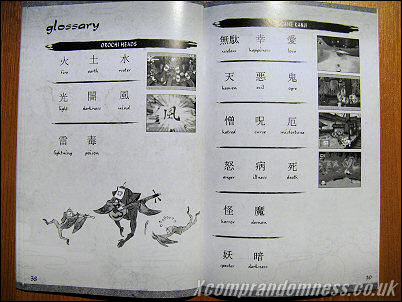 However, the humour and story are pretty generic. Susano's sarcasm and Waka's personality is something I've seen too many times to really laugh at. With Issun riding Amaterasu's back, it immediately reminded me of Zelda Twilight Princess. Again we have a cheeky little helper to guide, giving you hints during the adventure and once again, it's also about the awakening of a great evil and gathering the shattered powers to face it. 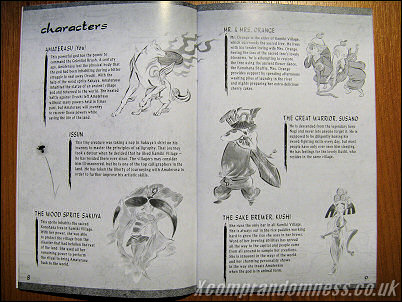 Okami is a beautiful exotic looking game with an interesting new concept but unfortunately, the brush stroke recognition can be very frustrating and its familiar storyline just couldn't keep me interested until the end. 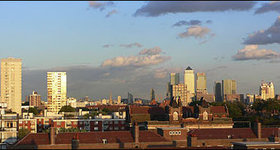 Shinkai lets his readers know that he's started to plan his next piece of work... 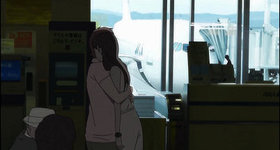 Episode 12 Summary - Sora of the Summer I am grateful to you all! I love you all!...

You have lots of time to draw when you're using the Cosmic Brush, but there IS a certain boss battle where you need to be quick on drawing, since your enemy at that time also has the power of using brush techniques...

Overall, the story's not too deep, but it's a fine journey after all. =D