A Classic Anime Based on a French Novel, Fifteen Boys Stranded at Sea

Just came across this classic movie while I was going through my old collection of VHS tapes full of recorded Anime. They were all recorded during the days when only 56Kbps connections were affordable and you had to pay by the minute to surf online. You can imagine the bills that one could knock up. These days it's much more convenient of course with cheap affordable 8Mbps broadband or faster.

So anyway, 十五少年漂流記 (Juugo Shounen Hyouryuuki) is a movie that of fifteen boys aged between eight and thirteen who were about to set sail on a long vacation one day. However later that night, they suddenly find themselves adrift at sea without any of the crew on board. To make matters worst, they are caught up in the middle of a storm and soon find themselves marooned on a deserted island. The boys have no choice but to fight for survival through the seasons until rescue comes. 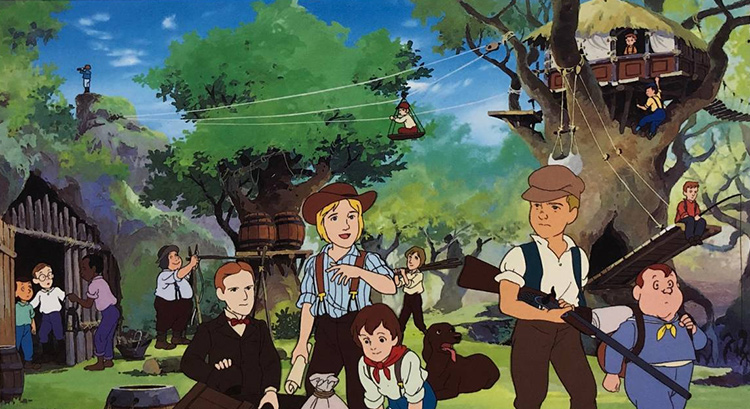 It's a very good movie even though it's aimed at young children. The story is very well told as we watch the characters go through various hardships. After watching it again, I couldn't help look up more information about it because some of the artwork and the storyline itself felt so Western and it turns out I was right. The show was produced by Nippon Animation back in 1987 and is based on Jules Verne's French novel "Deux Ans de Vacances (Two Years Vacation)". The Japanese title should translate to "Fifteen Boys Stranded at Sea" but the official English title is "The Story of Fifteen Boys".

What really caught my attention however, was actually the catchy theme song "Hitomi no Naka no Shounen (In the Boy's Eyes)" sung by Tomoko Tane. You may have heard some of her more recent songs such as "Broken Wings" which was the ending theme for Trinity Blood.

I tried looking for a downloadable copy of the movie's theme song but unfortunately, I couldn't find anything besides a sample from Tomoko's album "Golden Best 11 Year's Work (Disc 1, Track 6)" so instead, I decided to rip the song from the video. Quality's not great obviously since it's VHS tape but it's tolerable. Buying the album for just that one song wouldn't be very practical.

If you're interested, here are the lyrics to the song.

I've finished Persona 3 at 70 hours and am now playing my way through Paper Mario on...

I've been really excited about the Rebuild of Evangelion movies ever since I...

4 Mar 2008, 1:05:59 am
Yeah, the files expire on online storage sites expire if no one accesses them and Wordpress doesn't allow music files on their server so, nothing I can do unfortunately ^^;

I've updated the link now if you're interested in hearing the song. Good thing the video clip still works!

Out of curiosity, is the song dubbed in Norwegian in your copy of the movie?

I think the link to the song has expired btw... :)

3 Feb 2008, 5:53:24 pm
Well, if you don't mind the mobile cam quality with TV scan lines, you can download the clip I posted above. The last file expired but I've re-uploaded it now. You'll need Quicktime or some other player that supports 3gp files to view it.

2 Feb 2008, 10:44:37 pm
I have also been looking for this movie forever. I remembered it from childhood and now that I've found out what it is, I need a copy desperately. Why oh why can't I purchase it or download it from somewhere??

17 Nov 2007, 3:08:58 am
I've been looking for an original copy myself because the tape it's on is wearing out but, I'm afraid I didn't manage to find any stores that have this movie or sites that have it for download.

I don't know what language you watched it in but, if you feel like a bit of nostalgia, you could try watching this very low quality clip I made from the movie. It's the part where the theme song plays when they start to settle on the island. It's the only part that isn't dubbed in my Chinese recording of it.

I don't have a video capture card either so I can't transfer a better version over to the PC...

16 Nov 2007, 7:09:24 am
I have been looking for a copy of this movie for YEARS!!! Its one of my childhood favourites, I was wondering if you know where I would be able to download or purchase this movie?? Thanks -Chelsea