The Remixed OST of the Evangelion 1.0 Rebuild Movie

I've been really excited about the Rebuild of Evangelion movies ever since I learned about them but, I hadn't really thought much about the soundtracks that were going to be used. Soundtracks are really the last thing that comes to mind TBH since it's usually the story you get to read about first or visual screenshots. So I was a bit surprised when I listened to the movie OST and found out Shirou Sagisu gave the tracks a remix.

Most of the tracks sound very much the same although Shirou's added in a fair bit of oprah. I'm not sure how well those tracks worked out in the movies but, they don't really sound right. Saying that, "Lucifer's Cry" was an interesting new track. Besides getting a remix, the originals also got new names such as "The Longest Day", "Battaille Decisive", "Contre les Agressions" and "Mecanisme de Defense".

"Mecanisme de Defence" IMO, happens to belong to the best scene out of the show when the whole of Japan has to power down at night just to gather enough electrical power to take down the Ramiel. Brilliant scene! 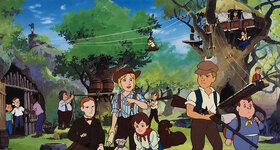 Just came across this classic movie while I was going through my old collection of...

It's the second Tuesday in October today so that means Windows Updates and, an...