Been a long time since I last built a Sankei papercraft which was over 4 years ago after I got back from my first trip to Japan. Don't really feel like I have the patience for one of these any more since they literally take a whole day to put together but, I saw this and since I'm a fan of Doraemon, I imported it.

It was during the pandemic when Japan had suspended all outgoing mail to foreign countries as well and UK was one of those countries. Fortunately I got my goods so time to put some effort into it!

There's quite a lot of Doraemon ones to choose from but I liked this "Takecopter" one the best since it features the Nobi residence. 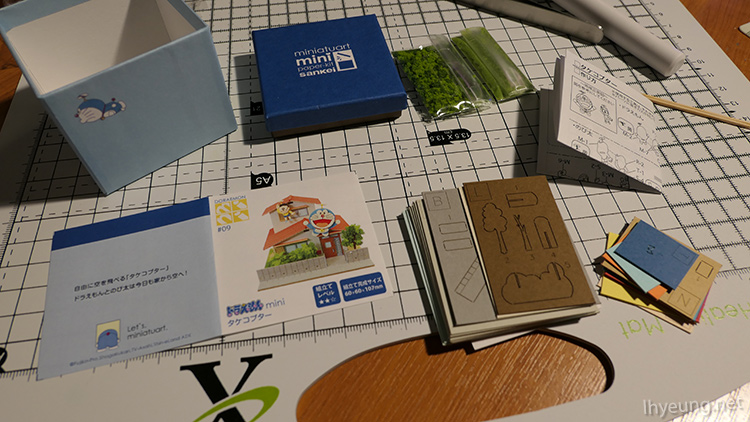 So first up seems to be Nobita and Doraemon. Need to do a bit of colouring on the Take-Copter, eyes and socks. I had problems finding something white before. Ended up finding a Uni-ball Signo pen which works better than trying to use correction Tip-Ex. Staedtler's Triplus Fineliner pens also have great small tips to work with these tiny pieces of card. 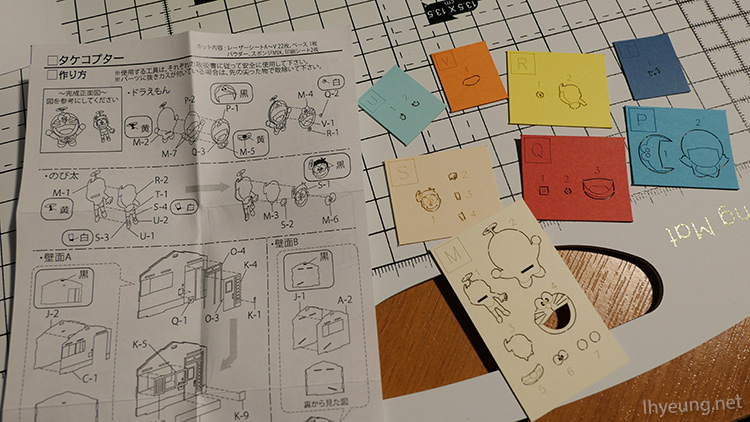 The parts they expect you to add colour are actually so small you'd probably wouldn't notice if you didn't add colour such as Nobita's white socks... 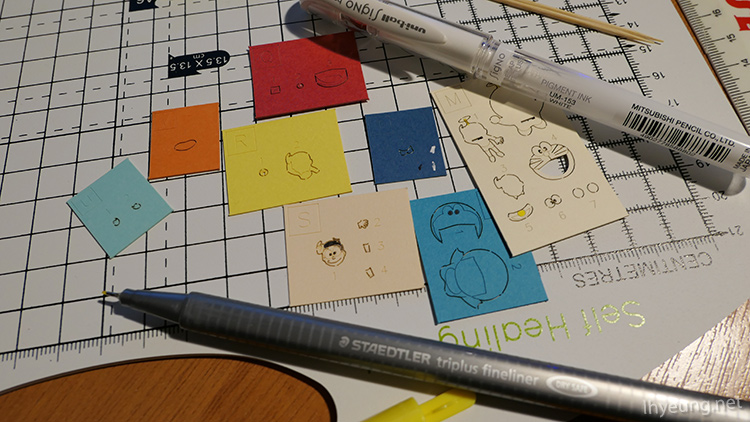 Lots to put together to create the 3D effect as usual. It's actually quite hard aligning all the pieces together which is Doraemon's main blue body and his hands. 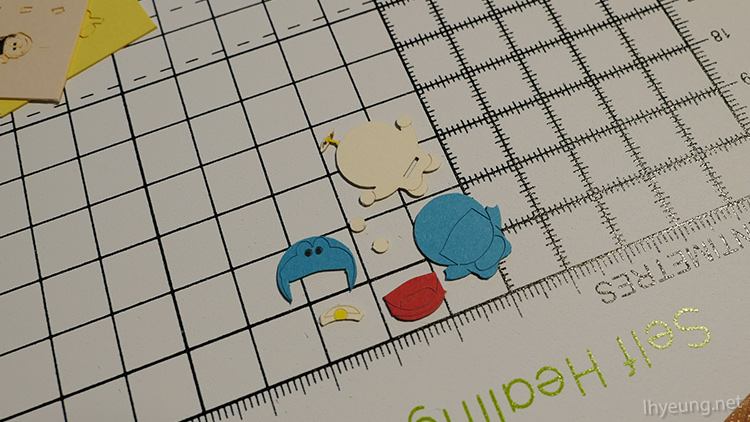 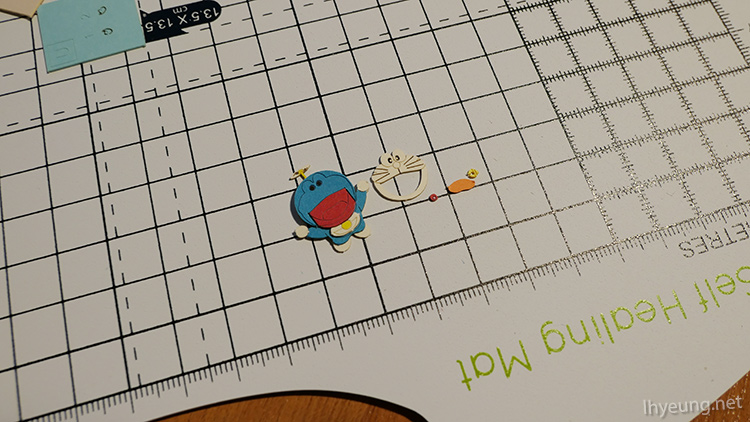 Putting on the rest of his face is actually quite hard so I suggest trying it out first before adding glue. There's supposed to be a bit of red line left to be his collar. 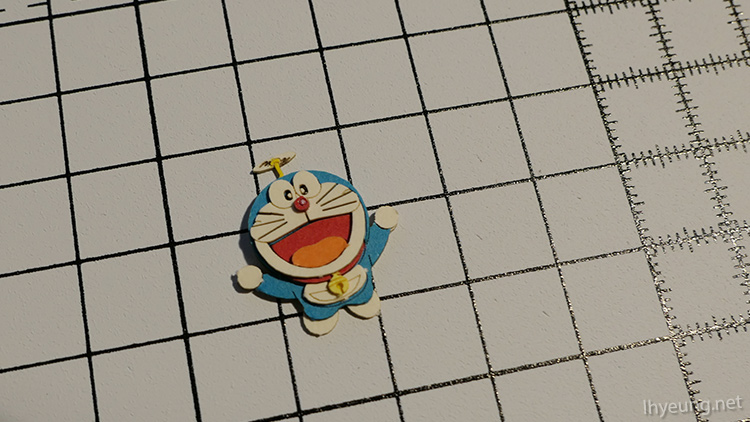 Nobita is harder to put together than Doraemon because of all this tiny parts; shorts, socks, shoes all a couple millimetres big... In fact, I almost lost his socks and shoes a few times. 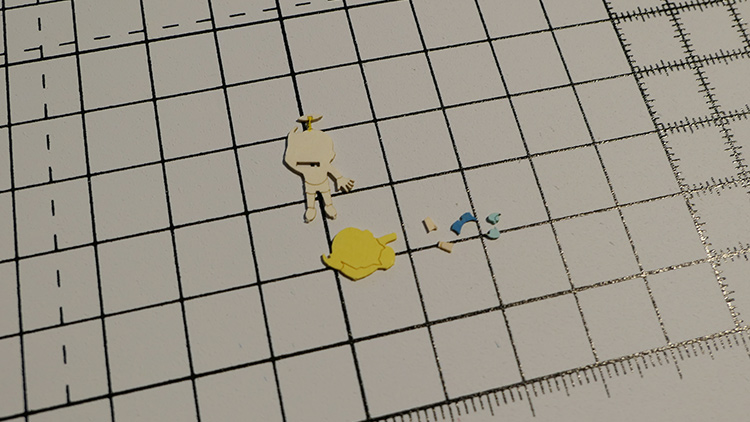 Same with his hands and eyes. 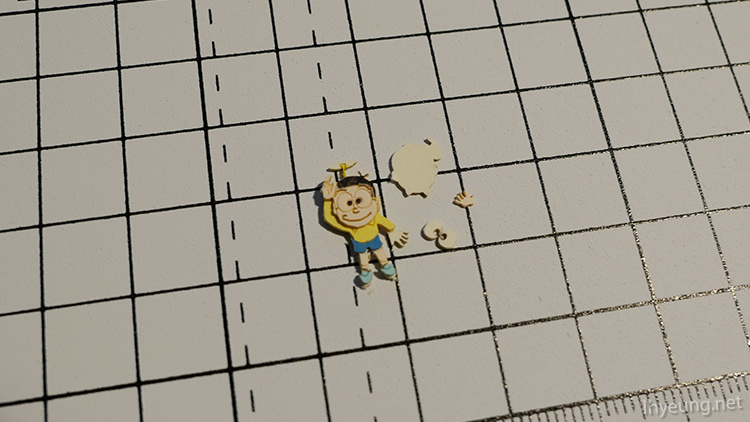 They look quite good once you've put them together. Almost 1 hour to put each together. 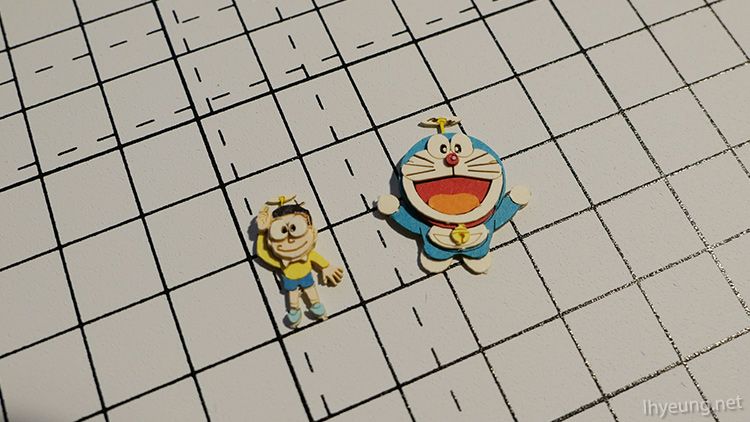 Now to build the walls of the Nobi residence. You'd think, "Walls! Must be easier since they're bigger!" but nope. There's a very very tiny door handle here on Wall A that's only 1mm! Same for the door frame. They're so fragile it's easy to snap them! 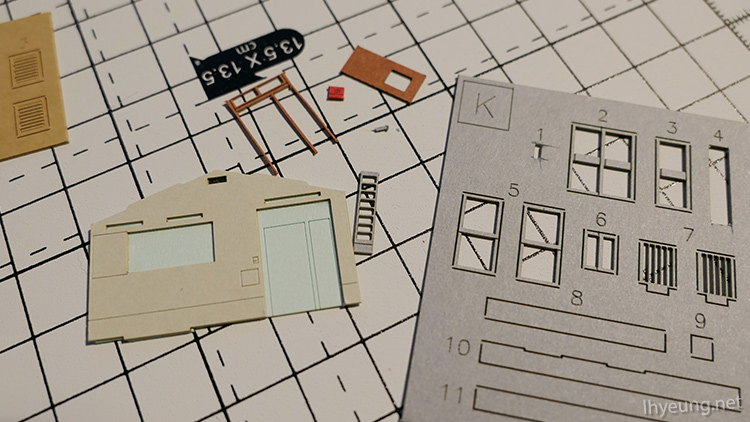 You really really have to improvise here and shift everything into place before the glue settles. The door knob on the handle is so small you almost need a magnifying glass to see it. 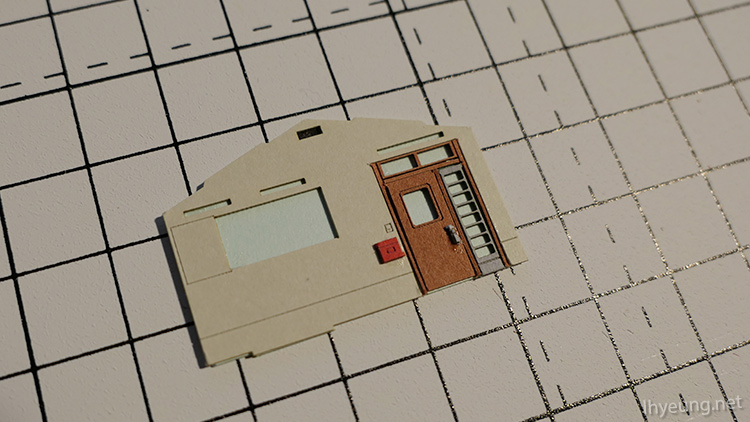 Porch side of the building. Can't forget the episodes where Nobita's trying to convince his mum in the garden to buy him something or when he needs to do some chores. 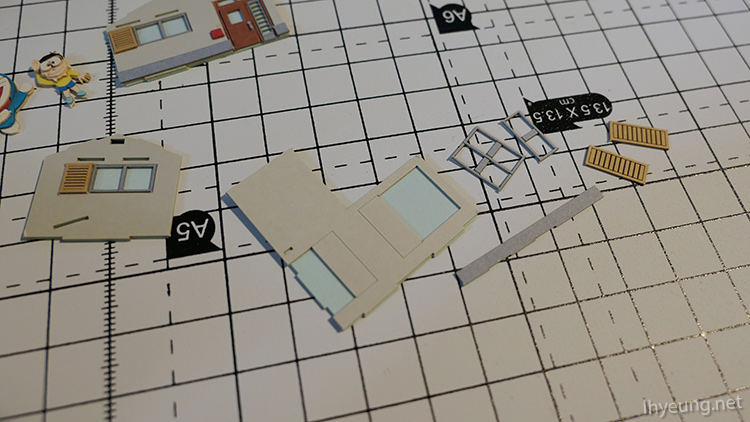 The long grey slab along the bottom actually has little grooves for the wooden shutters so you might want to be careful while placing them on. 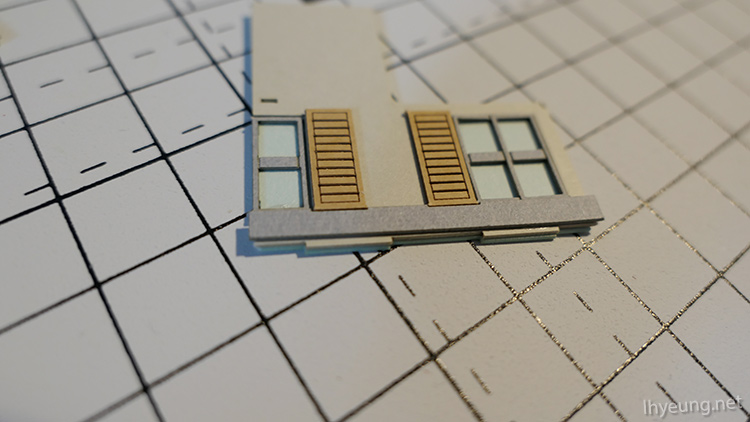 At this point I almost lost one of the window frames... When I pressed it out, it flew off somewhere and I thought I'd end up with an incomplete model. Fortunately I found it eventually ^^;;

So now all the walls are assembled, we can start putting the house together. 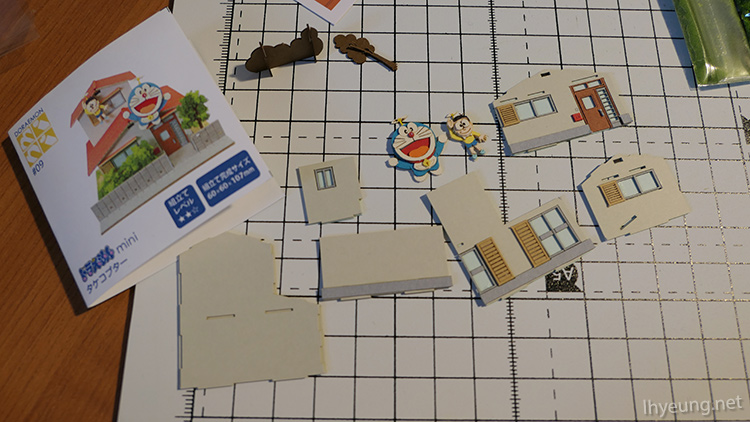 For the little bits of red roof it suggests colouring the base grey board the same colour but I just left it as is. 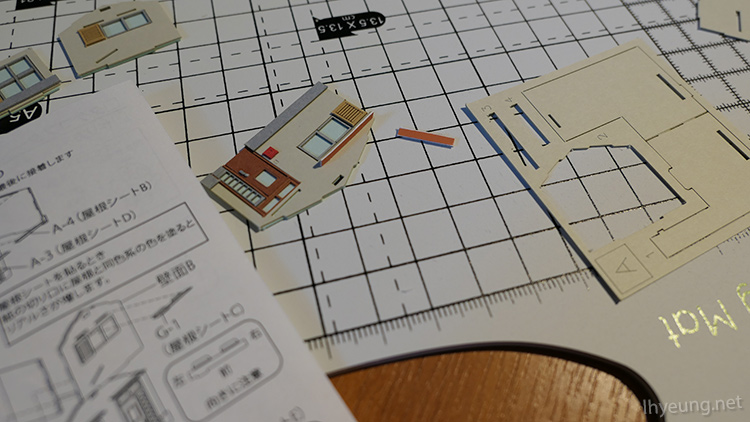 Would have been fun if the second floor actually had something in it, huh? But you'll probably have gone for a scale model instead. Still, looking pretty good eh? 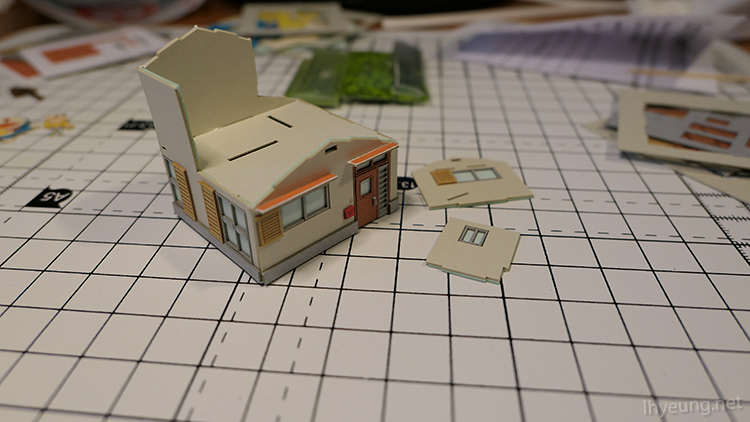 For wall B's shutter you have to pay attention which side of the G1 grey part is up. 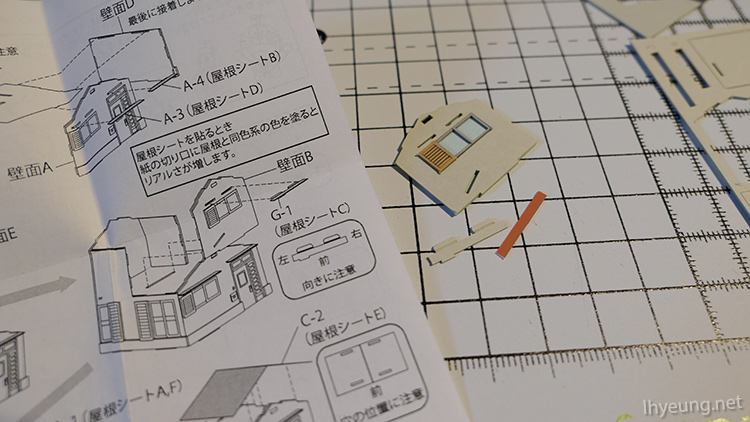 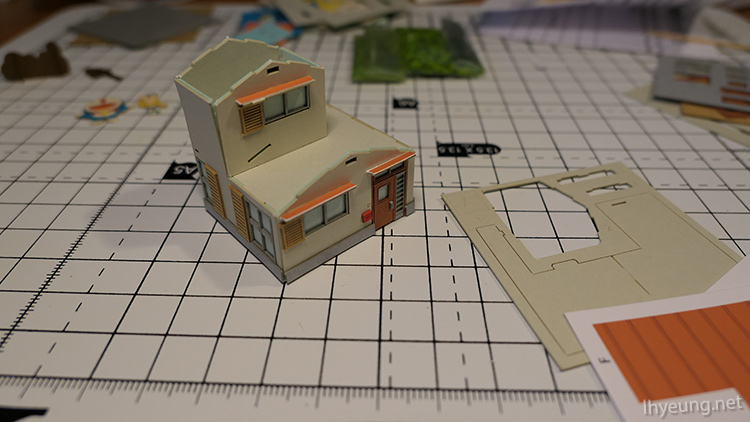 I ended up with too much of bottom red roof on A1 so I had to carefully carve away enough for the insert to show on the left. 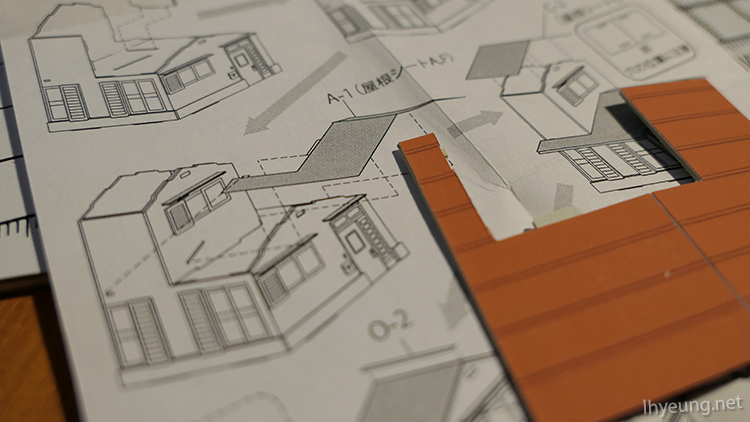 I actually couldn't get the upper roof to slot into the notches so I just stuck them on. By this point I already had the lower roof glued on. Otherwise I could have just trimmed the notches off so that there isn't a gap between the roof and the building. 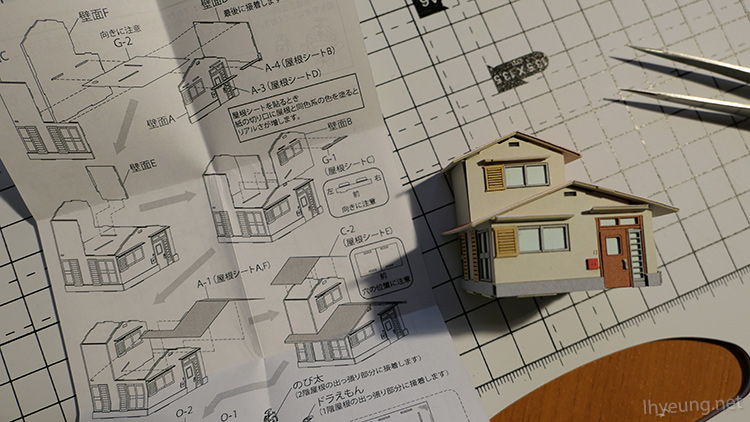 Rest of the parts are pretty straight forward and easy although again, I had problems attaching the house to the base. I also chose to leave Doraemon and Nobita last as they're also not that easily attached it seems. 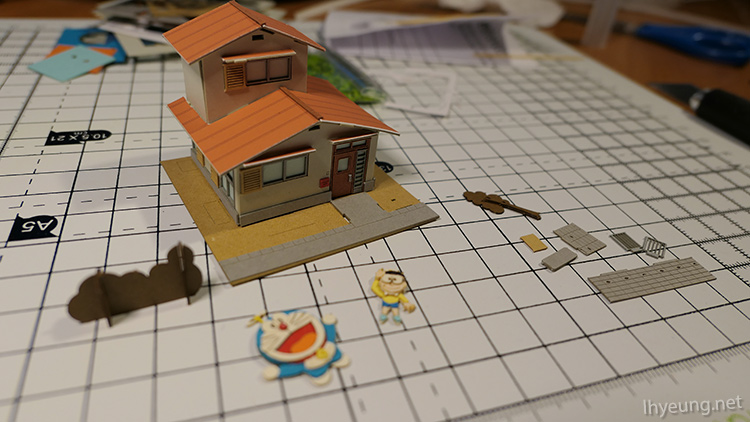 Grass and tree messy as with other models. I ended up using a more generic kind of glue this time; just any kind of white craft glue which will turn translucent when it dries anyway. It's also less stickier than the Pritt translucent glue so you can dab the green sponge to make the tree. 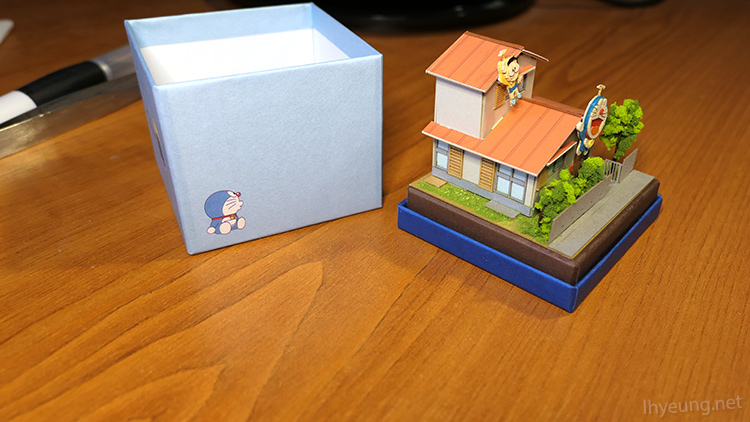 And that's it. About 8 hours once again. 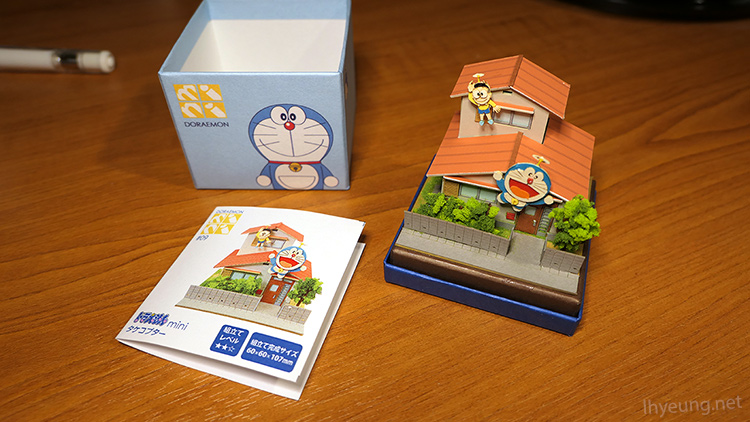 Doesn't look too bad despite the gaps ^^