I really enjoyed playing this CRPG but noticed there weren't any written guides out there so (at the time of writing) the only thing you could do was trawl through Steam's forum to find solutions. Or maybe there is but the game's name "Tower of Time" is so generic search engines just haven't picked up on them yet. So, I decided to put together some tips for places most people seem to get stuck at.

If you don't like spoilers I suggest only scrolling down only as far as you need. 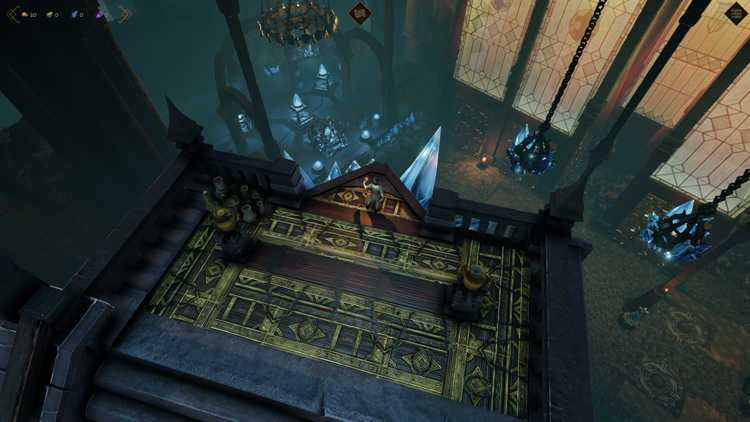 Days of Old I

Threat of The Rising - Magic Barrier

There should be some orcs with a shaman amongst them along the way to the barrier but, if like me you've just gone ahead and cleared every enemy you've come across, you might have defeated them already.

For the first part of the barrier you must find the statue Devron who asks you to find his sisters to help him defeat the power source that's letting the orcs animate the dead. 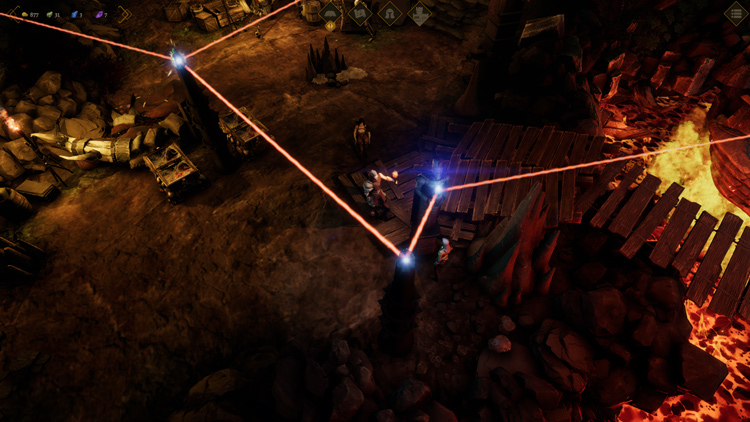 There are two of them nearby. Elidra... 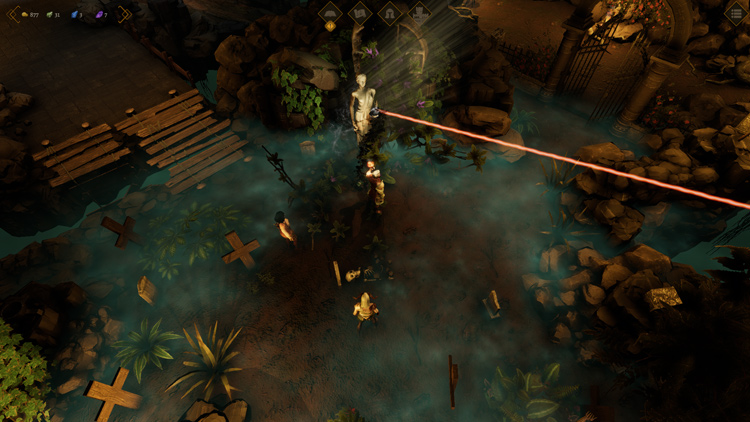 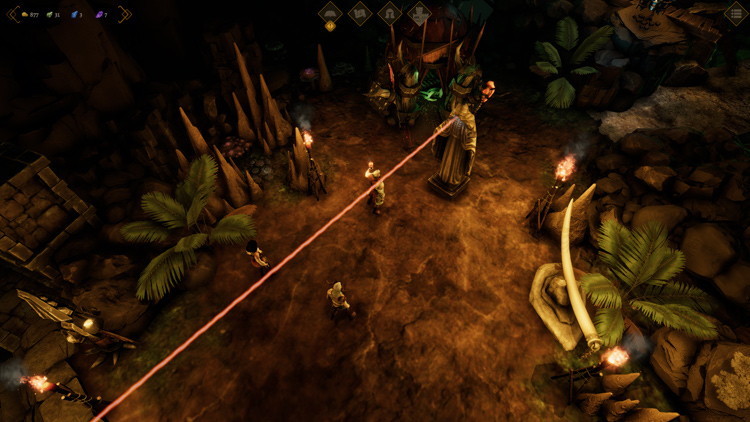 Afterwards return to speak to Devron and after the cutscene, return to the barrier and you'll find there's a second barrier up. Head down the path near the teleport stone to a cold blue area. 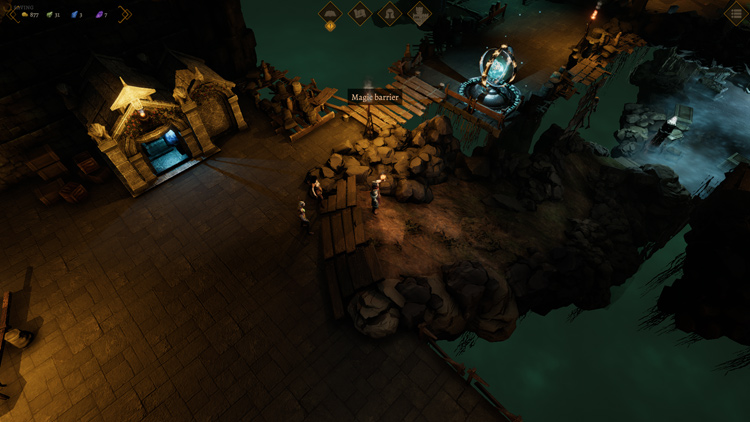 Click on the statue and a new path will appear for you to fight an elemental at the end. After defeating him and obtaining the wand, you can break the second barrier. 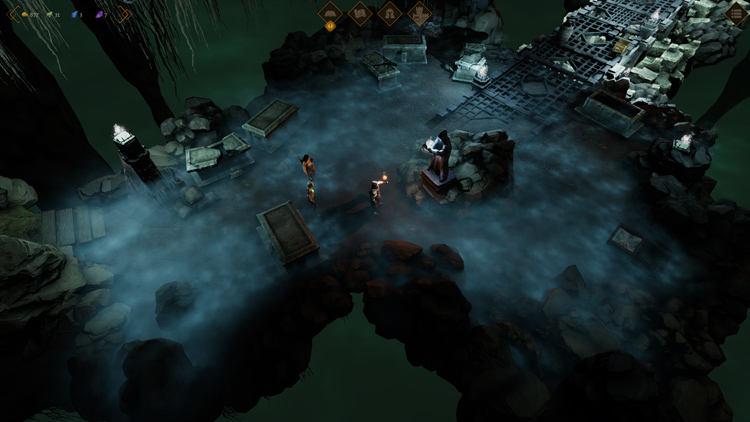 This part is optional for weakening the Shade boss found in the Secret Laboratory.

I didn't have much difficulty defeating it with a party consisting of Kane, Maeve, Aeric and Rakhem with their levels at 7. I think the toughest part was when the Shade gets to half HP, then you need to lure it away from the DoT AoEs it creates or keep your tanks out of them or they'll get eaten away quickly.

But anyway, just in case you do have difficulty defeating it at full strength, here's what you'll need to do to activate the beams. Note there's a separate boss fight involved.

For the fire and air essences, they're on the Magic Training Grounds.

The fire essence is directly west of Alien Y. The closest teleport would be the Fire Crystal. Return to the long stone bridge where you fought and at the end there are some stairs that lead into the lava. Whisper will notice the essence.

Next, simply teleport to the Air Sector and examine the Whirlwind who will give you the air essence. 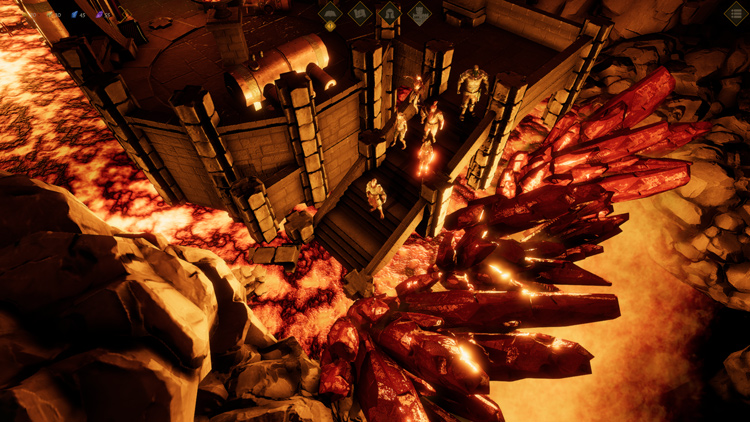 The remaining essences, water and earth can be found on the third level, Service Floor. Just hit "c" to return to the city then you can go back there.

To find them, talk to the relevant servants i.e. Water Servant for water essence, Stone Servant for the earth essence. 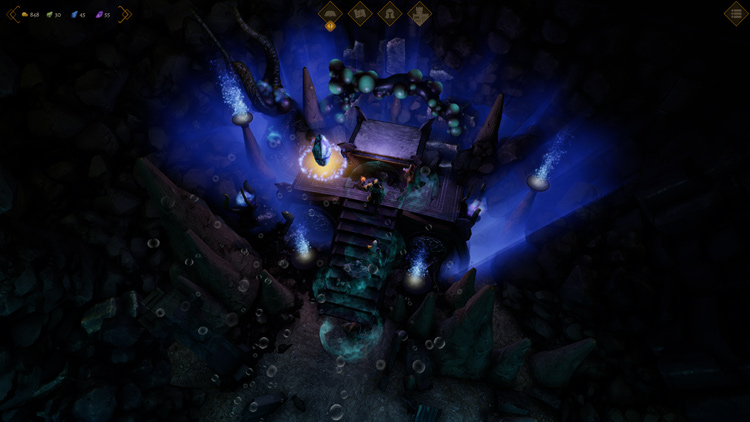 If you haven't noticed, one of the beams in the lab is actually broken so if you try to activate the earth beam, it will request you fix it first... The journal suggests returning to level two, Living Quarters to find the tools you need.

The teleport you're looking for is the Grand Library where there will be a mini boss fight. If you haven't already figured out the riddle on the board, "time without beginning or end", you need to set all the clocks to 12 o'clock to unlock the secret room. 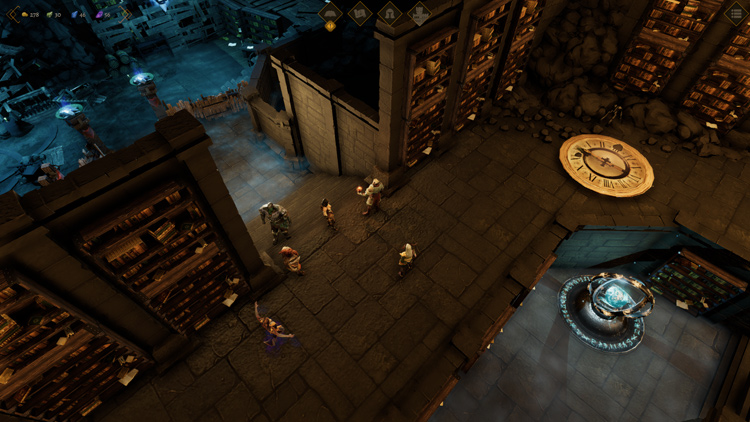 After defeating the boss and obtaining the tools, return to the lab to fix the pillar and the final beam will activate. 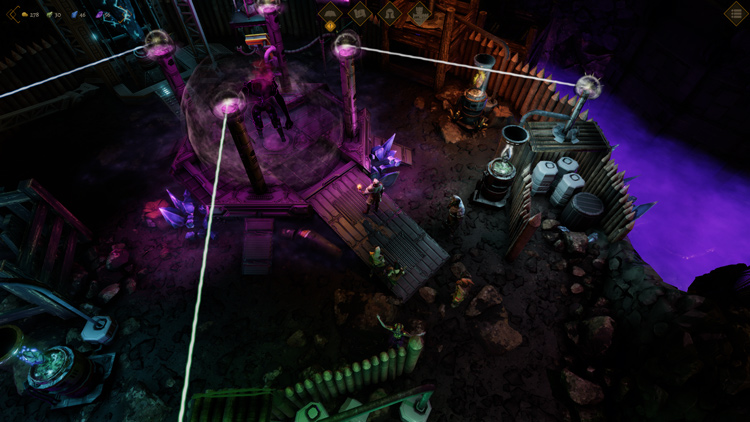 One part, the Mana Diffuser, can be obtained from the dispensing machine once you've connected it to Faradus and enter the code you can find from a note on the level. Codes you've come across can be found in the journal under "Mystery of Numbers" but in case you haven't come across it, in reverse the code is 1109. The Mana Coupler can be found as part of a machine somewhere else. 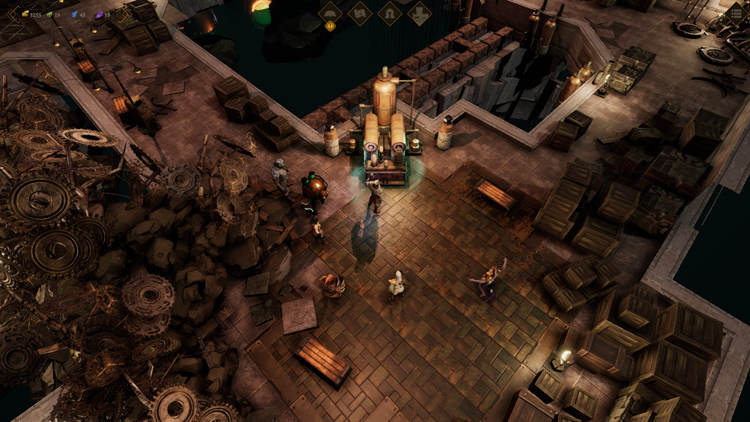 The Platinum Rod and Ignition Pilot is a bit trickier. You have to find the shiny engineer's signet and then head to the passage blocked by rubble nearby and use it on the broken lamp there.

After that, you're ready to power it on and get rid of the fumes. 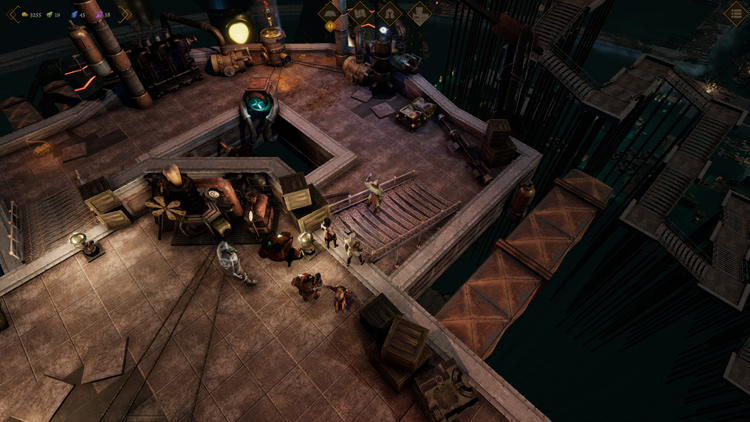 In case you're wondering, yes you need to fight this titan and the codes you gather basically work the same way as the Shade. They weaken the boss depending on how many symbols you have lit. 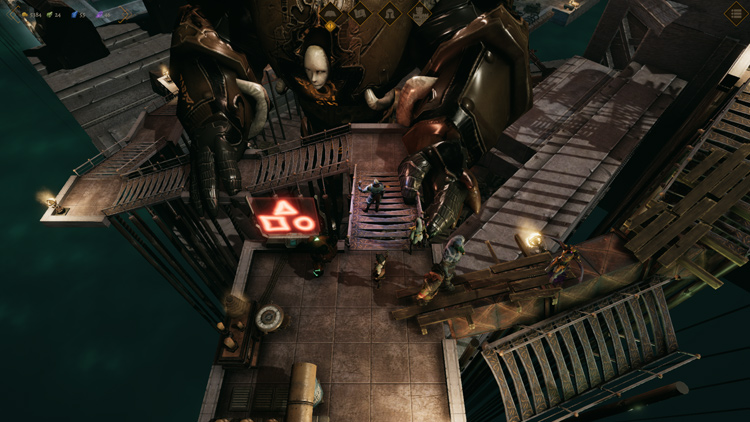 To overload the core, three beams don't seem to be enough and funnily enough, one of the pylons seem to be broken so it doesn't look like you can project a fourth beam.

However, if you take a closer look at the beams, you'll notice there is an extra red beam in the top-right. If you manage to get the beams to this state you're on the right track. 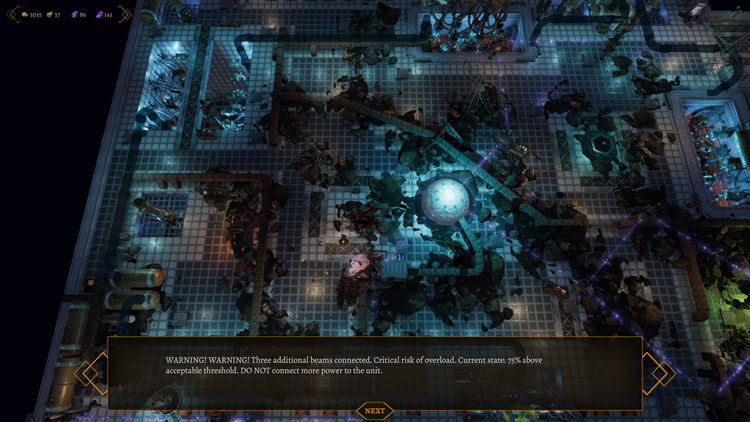 Next, you'll want to turn the two marked pylons so that they're both firing to the top-left broken pylon. It will become powered and the fourth beam you require will appear from it.

All that remains afterwards is to revert the two marked pylons into their original positions and you have all four overloading the core. 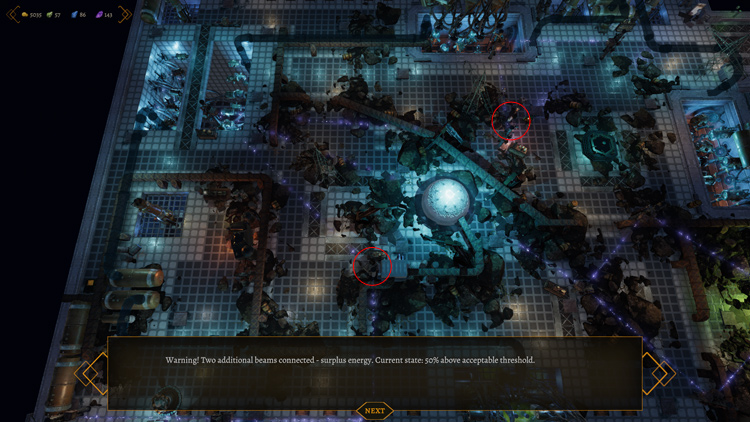 In case you're wondering what the rows of matrix buttons do and haven't looked at the entry "Daeva Language", you basically light them up to form an x (no), + (yes) or o (don't know) to answer the questions the Daeva ask you.

I'm not sure if your party alignment affects the "answer" but maybe it does. Choosing the correct answer avoids fights and rewards you with some really powerful unique weapons while the wrong answer leads to a fight and crystals. 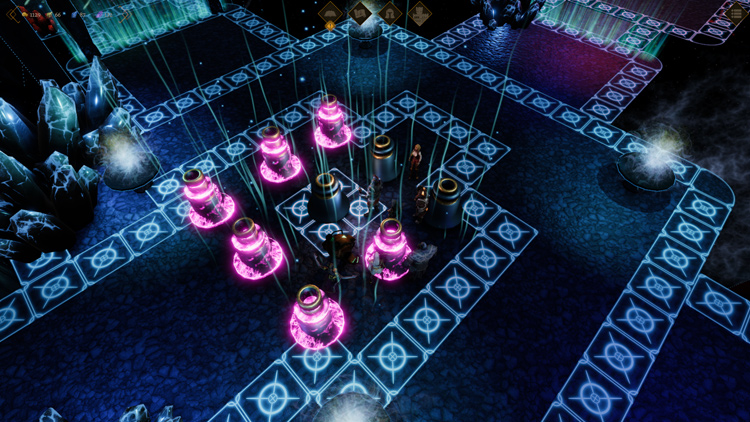 I highly recommend saving before the Grand Trial as you might end up with a party of under-levelled/geared members in the party.

With the exception of Rakhem, I was left with Boron, Whisper and Kaela who I never made use of during the game and what made the portal fight even tougher was no one had healing skills. Still, I had enough spare gear and gold to level them up a few levels. I focused the gold all on Whisper and Kaela so that I could get the DPS as high as possible (not to mention Kaela has a solo fight later too) and managed to get through fairly easily. 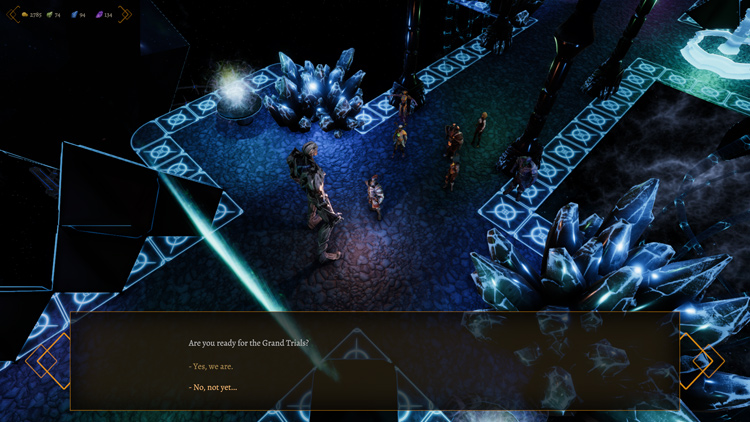 All your members (apart from Kaela) are judged to decide whether they are worthy of staying in the Daeva's realm which means if you select the wrong choices, everyone gets kicked out and can never return to the blue realm to explore.

The key is the two answers you select during each member's trial shouldn't conflict with one another e.g. if you think it's wrong to steal for question one, you don't choose to steal in question two even if it's a desperate situation. You stick to your principals so that you're considered "aligned" by the Daeves - you basically need to know the characters well, really.

For the record, here's what I chose for an aligned party.

By passing the Great Trial you'll be rewarded with some gear and also be able to return to the realm to explore some more.

Don't forget to restore your party.

To return to the sealed portals you can exit the realm then use the blue portal in the Ventilations System Central area.

Unsealing the hot (hint, hint) portal on the right will let you acquire a unique blade while the cold portal on the left, will lead you to a boss fight.

Takes quite a bit of running around to unlock the cold portal... and the fight is very tough! You'd probably want to return to the boss some other time. There also seems to be a bug where the fight doesn't trigger when you enter the portal so save before entering. 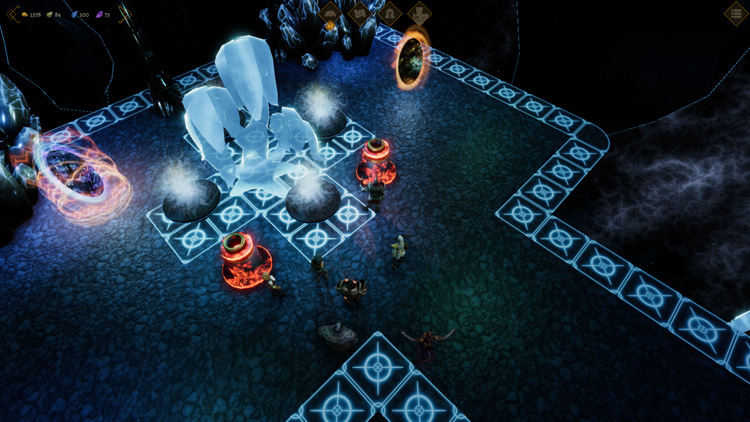 Hope that helps you get to the end of the game! Have fun! 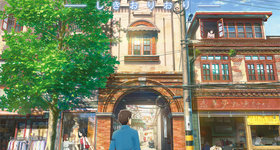 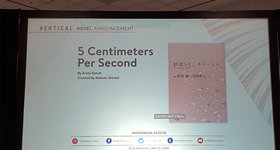