It's been almost two years since the last Trauma Centre game on the DS and to be frank, the fictional operation game that made me buy both of Nintendo's consoles was feeling a bit stale. So how does this latest title in the series, Trauma Team play?

The story begins when CR-S01, a prisoner who was allegedly responsible for a terrorist attack at a university, is released temporary to make use of his expert surgical skills - In exchange to reduce the 250 year sentence he's been given. When he arrives at Resurgam First Care Hospital, his skills amaze the other doctors there and working with him, they don't believe he was really the one responsible for the incident. However, CR-S01 felt different. Having woken up with amnesia and large numbers of corpses around him, he has been convinced he may have been responsible. But with all the encouragement from the new staff at Resurgam, he is determined to begin anew while hoping to recover his memory and learn what really happened 8 years ago.

The most exciting part of this new title when it was announced was probably that you will be able to play through 5 different fields of medicine which would bring some fresh life into the series and it does in a way. There are 5 doctors to play as and as with previous games, the story takes place in chapters. However, every doctor has their own series of chapters which interleave with the others and you have to play through their paths before you can unlock the ones where they work together.

If you've been playing through the Trauma Centre series since the Under The Knife on the DS, you might remember how easy most of the operations in the sequels felt because you were doing the same thing all over again - Suturing wounds, draining haemorrhages, excising tumours and extracting bits of debris.

Playing as CR-S01 you're back doing those things again but Atlus has put in enough new elements to make it fun and exciting again. Debris comes in all sorts of shapes and sizes so now you have to be extra careful when extracting them such as a pipe that's too wide at certain parts to get pulled out. Fixing up fractured bones remain a jigsaw puzzle experience but you have to juggle between multiple areas now.

Of course, all the old familiar wounds and injuries are back too but they don't keep things easy or re-introduce the problems one bit at a time as before. At least not in the normal "Resident" mode. Right from the very first few operations, they throw almost everywhere you were familiar with from the prequels into a single operation! It's great fun yet it was still pretty easy to score an S rank. 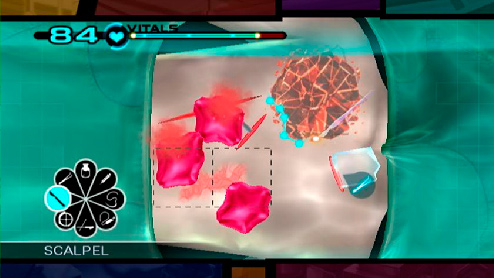 As for the new medical fields, you're actually using the same tools most of the time but in a different sequence. It's been all about speed for the Trauma Centre series so far but now you get to slow down a bit. Maria the paramedic is fairly much the only other medical field where you have to work fast because you have to juggle between multiple patients whose vitals are constantly dropping! You're only allowed to lose so many patients before the game's over and I actually lost once while trying to get to balance the procedures right.

Tomoe's endoscopy requires slowly thrusting the Wiimote or you might damage the internal organs. Hank's orthopaedics feel like a bunch of mini games where you are playing buzz the wire most of the time.

That said, it's good to see some good use of the Wiimote again such as waving it in a circle to wrap bandages around patients or, twisting the nun-chuk like a pin so you can then wave the Wiimote to hammer it down. 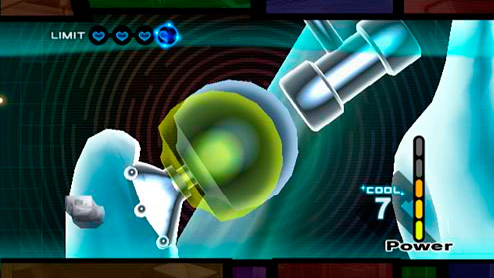 Perhaps the slowest and most boring element is Gabe's diagnostics where you have to talk to the patient and spend time spotting differences between charts. You run through the same conversation over and over again to spot any potential problems not unlike the Ace Attorney games on the DS. Then once you've spotted enough symptoms, you move to your office and start matching up the symptoms you've found with candidate diseases that it maybe. It's a much slower process than the hectic operations that has been the main source of the game so far. The AI RONI and the odd patients do help cheer things up with a joke but other than that, it can get very tedious and tiring. Things would have been slightly better if they could be overlapped or viewed side by side.

Naomi's forensics is more interesting, gathering information from testimonies and crime scene evidence, putting clues together to work out what really happened. Minus the crazy characters and humour from the Ace Attorney series. 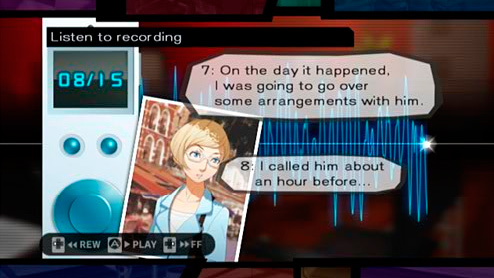 These last two medical fields are fairly much what drags out the playing time the most to double that of prequels.

Up until now, the Trauma Centre titles has always used a visual novel approach where you read through lots of dialogue and watch the character portraits change. Larger event illustrations were introduced since New Blood which again, is another feature of visual novel games and now Trauma Team uses a new comic style approach.

At first, I was sceptical it was going to be good because all the beautifully rendered backgrounds are gone. They look more like the low budget Anime shows with simple shades of colours now but because they're lightly animated, you'll hardly pay attention to the details. It's kind of like watching through a window. It actually doesn't work out too badly. If you're not a fan of the story however, you can skip all the cutscenes and dialogue as before.

Everything also looks sharper and cleaner. Some of the visuals actually look a lot more gorey than in any other prequel but doesn't really show what Atlus is capable of when it comes to horror such as in their earlier MegaTen or other dungeon crawling games.

Sound effects largely remain the iconic ones used in prequels while the music compositions also have the same vibe as before. This doesn't really come as a surprise when Atsushi Kitajoh is the one responsible and had worked on the prequels too. I've always been a fan of the music and in this case, they still sound very good and mature.

There's full voice acting but the English voice acting sounds a bit lacking at times and the tones feel as if they don't quite match the characters. Tomoe doesn't quite sound as refined as she does from the Japanese version and CR-S01 sounds a little too old.

The story is as before, pretty thought provoking as we see the depressed CR-S01 slowly recover from his depressed self thanks to the rest of the supportive and optimistic characters. Do you really want to spend the rest of your life stuck in the past and not try to do something about it? Do you really have to treat others badly just because they've done something wrong and not give them a chance to redeem themselves?

And once again, it's good to see a brief reference to New Blood's Concardia Hospital and an old character making a return which suggests this game takes place between Under the Knife/Second Opinion and the sequel.

Atlus has done a great job with Trauma Team giving the series some much needed fresh gameplay ideas and for that reason, I'm sure veterans of the series will enjoy this latest title immensely. Unlike other prequels where the operations were very short and had little to do, the game doesn't hold back in normal mode, something I feel was done right in this game. Personally, I'd still want to see an unlockable gallery of artwork.

And if they plan to keep all these different medical fields in future titles, they should probably give the player the option to play through to the end of the story with a single character instead of forcing them to play through everyone. I would definitely prefer not to play through the new diagnostics again.

If you didn't like the other Trauma Centre titles because of the "alien diseases" you might enjoy this one because most of it is a little more towards the realistic side but don't expect your everyday drama show. Those who have enjoyed the series for its challenging and hectic pacing might not enjoy the new slower paced medical fields. 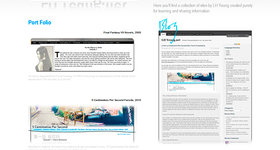 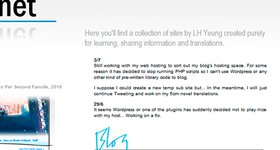 Anyways; I can't help but agree more on the voice acting for Tomoe, although CR's was okay, but I think I have to sit down and listen to his Japanese one some more.

Endoscopy I found was the most challenging, they were the lowest rankings I ever saw in playing through Trauma Team ( ;_; ). I'm not sure if it would help others, but I found it was easier to play through once you turned the camera sensitivity on high.

30 Jun 2010, 1:57:18 pm
I played the American version but watched a lot of the Japanese footage so I know what the different voices sound like :grin: