Kita-san spotted a 4 page Persona 3 Portable interview with Atlus Persona game director, Katsura Hashino in this April's issue of Dengeki Playstation with some interesting details in it...

When asked about the next Persona title that they are about to start, Hashino made no comment whether it was Persona 5 or on which platform it will be other than it will have new features.

However, in answer to fans hoping for a Persona 4 Portable, he comments that they will not be producing it unless they can find some method of including certain content that they couldn't when they developed P3P. Maybe he means the realtime 3D cutscenes that were in the original PS2 game but were removed in the portable version?

He goes on that if they did indeed produce P4P, there would be some sort of cross-over in it with other games which, I presume means that they would have some P3P cameos as Atlus tradition goes.

By saying they won't produce P4P, I think he's pretty bluntly stating that the next Persona title will indeed be Persona 5. Also... I don't see why they can't develop the game on two UMDs if there's a space issue just like what Falcom did with their Legend of Heroes VI Second Chapter RPG?

In any case, I'm hoping it won't be for the PS3 because it would be another major reason for me to buy the console. I highly doubt they would make a Persona game with real life-like graphics, though ^^; 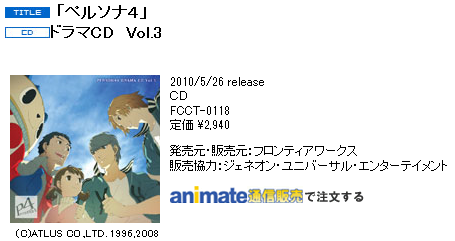 And while we're on the subject of Atlus' Persona series, let me remind you a Persona 4 Drama CD Vol. 3 will be released on May 26th - Just in case you missed it on my Twitter and don't know already! Look out for the goods on Play-Asia if you're interested.

The last volume 2 drama was hilarious even though it had your typical "girls can't cook" Anime/Manga scenario.

This time, the drama is set in the year 2011 autumn. The gang is having a study group together at the MC's house. While studying, they start to question why do they study? The school sports festival is also coming up and they wonder why they bother with that too when their classmates' motivation are as low as their own.

Cue "Signs of Love" track from the OST.

I guess this issue with motivation is something everyone goes through sometime, not just with school so it will be interesting to listen. Personally I think studying helps expand our skills, helps us get closer to achieving our goals and allows us to take better care of ourselves and others.

As for this sports festival event... I think it's creating memories and spending time with others.

Well, until the next bit of Persona news! 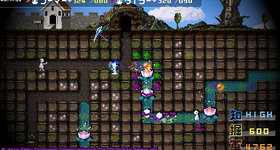 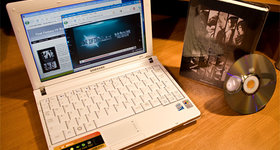 That was my absolute favorite part about P3P. It was like playing a whole new game, which is the draw of the game to begin with.

If they made P4P, with a FeMC, I would be all over it the minute it came out. Just like with P3P.

At the moment, I'm even unsure whether I'd rather have P4P, or P5, as I feel more and more doubtful that they are even working on it, or that I might like it. Especially if they go and release it for PS2 or PSP.

30 Jul 2011, 9:37:18 pm
Now they have NO EXCUSE AT ALL NOT TO MAKE IT! The PS Vita can definitely handle the game, and space isn't an issue. I want them to do a full well done remake and release it in a timely fashion soon after Vita hits the market in the US. But this thing is so powerful they could just port it to Vita and it would work no problem. So now Atlus has NO EXCUSE!

But why not... quick cash in, little work so good from a business point of view.

18 Feb 2011, 6:39:42 pm
So many wants and needs yet, none are taken to Atlus directly. Lets just say they wont change their minds unless they see something like this posted "In front of their faces".

24 Dec 2010, 10:27:03 pm
I so agree with the P4P supporters!
I mean...I didn't know how awesome Persona was until I played P3P because it was convenient and I could basically play it anywhere and put it on sleep mode and stuff since I have to fight my bros for the TV for the PS2! If they made P4P it would be so awesome...so PLEASE!

14 Dec 2010, 4:34:24 am
another thing I would like the ability to do is have homosexual relationships. There's enough clues and hints in the games, y'know? Do it for the people, make us happy.

10 Dec 2010, 11:41:35 am
I don't think P4P has a space issue. It's probably because in P4, the game involves a very large amount of 3d cutscenes. In P3 they had already removed a lot of those cutscenes which is quite depressing as it is, but P4 has much more, and would ultimately ruin the game if just displayed as on screen dialogue.

15 Nov 2010, 10:52:07 pm
I'm the kind of person who spends all of my free time playing PSP because I have to sit in places (mainly my job) for hours with nothing to do. Having P4P would be great for something like that. I've already logged in hundreds of hours on P3P and I still haven't had a chance to play P4 because I don't have time to play games when I'm at home...:(

I don't even know why I'm honoring a response to this guy, but what he just said is absolutely retarded.

And secondly, why would we "stop supporting Persona games"? Don't include the real fans in the same bag as you. The only reason YOU people want the game on the PSP to begin with is to get it easily with a hacked PSP - Don't even try to mask it out, this is mainly the reason why US and EU is losing up to wonderful games like Monster Hunter Portable 3rd.

16 Jul 2010, 11:09:58 pm
@FangOerba:
Even though it may not be needed, people keep pushing the development of P4P because they enjoyed the original. They would like to be able to play P4 "on the go" and would especially like it if it were to have some new content and scenario's.

8 Apr 2010, 5:43:35 pm
I really want them to make Persona 4 Portable even if they have to use 2 UMDs. The game needs to be on PSP. And so does the upcoming Persona 5, even if they make it for PS3. It's essential that all Persona games on PS2 are on PSP. But it would be cool if Persona 5, despite being made for PS3 was made for PSP.