Finally! After 3 weeks of waiting the Persona 3 Portable OST has finally arrived from PlayAsia! Was getting worried it was lost in the masses of Christmas post ^^; 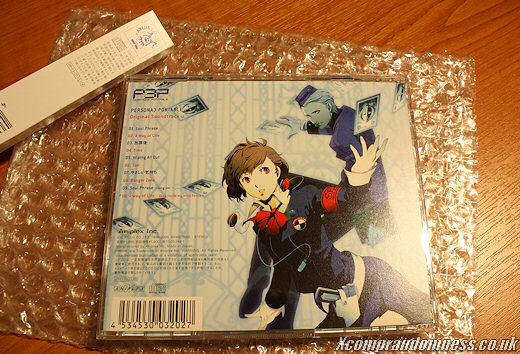 Been a little while but I'm still battling, moving fast
While you're just prattling no time for me
No tangling, hit you in the spot with no angle and...

I'm not a princess
a lot of anger in it
Not a cutie girlfriend, oh no
Don't you know?

You can not run away
hell nah, no man can run away
from me I stay in your head as
one big threat

It's demolition
wiping all out
I won't go, until it's over

This song's got style and attitude as you would expect from Lotus Juice (and most hip hop/rap) - "I'm not a princess, not a cutie girlfriend". Shows the tough side of the Heroine and I kind of like both this and the original "Mass Destruction" for the Hero.

I wonder if Lotus Juice was thinking about those moments when overly rude guys get a kick in the nuts from the ladies when he came up with "Hit you in the spot with no angle and..." Or is he just talking about guys brawling since he also has the line "Been a while but I'm still battling" as if that verse is about the Hero from the original version of the game.

The fourth verse in the song sounds like he's talking about the game's Shadows but I think it could also imply you're in love and can't get someone out of your mind.

(Chorus) I tried hard but where did we go wrong?
(Chorus) I hope we could... But I won't start all over again

Midday street walks light fell and dispersed in the air
Nobody stopped to see them fade, your eyes seemed so innocent
Everything made sense to you, they didn't to me

And then a song showing the soft side of the Heroine. Quite a nice bitter sweet song and the lyrics are written pretty well for a non-native.

The line "I heard you say we were on the same street" - 'street' should probably be 'path'. Tanaka was probably thinking "michi" in Japanese when she wrote the lyrics. It makes more sense when the song's clearly about love so path would mean something along the lines of being destined to be together.

Every time goodbye to yesterday, greeted by today
Smiling at tomorrow, no one really belongs
Each time we hope to stay around I know how you feel
Beyond your words

Again, a song with lyrics suitable for the life sim part of the game talking about time going by, never stopping like the wind. Quite a nice melody but not something I would listen to.

I believe so strongly that tomorrow never falls away, tsukibikari shita
It still awaits, it still carries on through its old ways 'til this moment of time
ano toki kawashite kotoba ga narihibiite sasayakana yume
There is no more darkness, no more tears in the rain, no one hurt

I believe so strongly that tomorrow will never fade away, under the falling moonlight
It still awaits, it still goes on in its old ways 'til this moment of time
Those words of our dreams we exchanged once upon a time, continues to ring in our hearts
There is no more darkness, no more tears in the rain, no one is hurt

I believe so strongly that tomorrow never falls away 月光した
It still awaits, it still carries on through its old ways, till this moment of time
あの時交わして言葉が鳴り響いてささやかな夢
There is no more darkness, no more tears in the rain, no one hurt...

The single disc soundtrack features 10 tracks by Shoji Meguro. It has a lovely blue cover featuring the Hero with Elizabeth on the front and the Heroine with Theodore on the back. 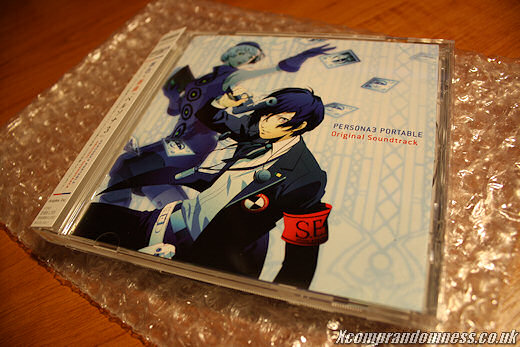 I think they should have put the Heroine on the front since she's the main feature in this third version of Persona 3. 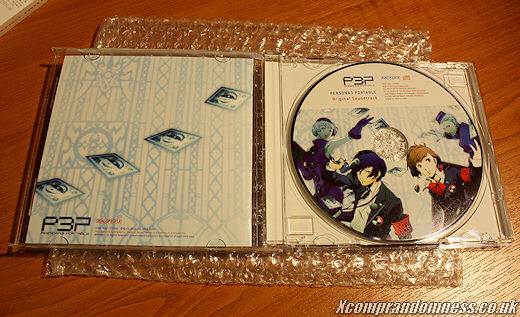 First press edition comes with the covers as stickers. 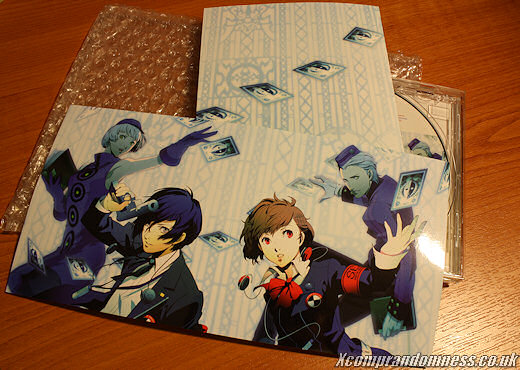 The booklet itself contains comments from Meguro and the lyrics but doesn't have as many screenshots from the game as the original P3 OST - Just one screenshot in fact. It would be great if Atlus actually put in some more original illustrations into the pages. 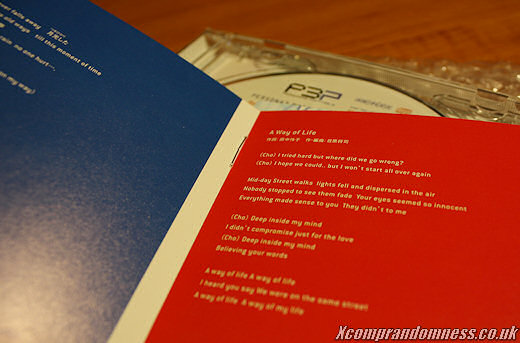 At the back is the illustration used for the PSP game's cover. 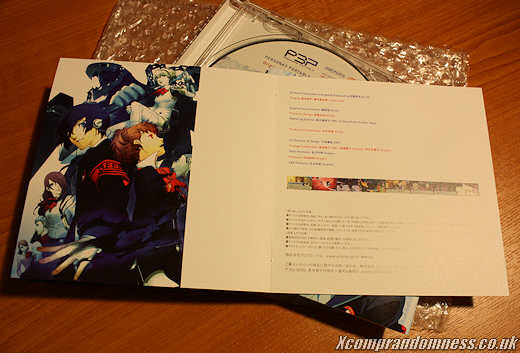 Again, as with the other P3 OSTs, there is no Japanese translation of the lyrics... I wonder if the Japanese players care what it all means? Especially the rap.

Right, time to rip these as lossless FLAC files to listen to on the move. 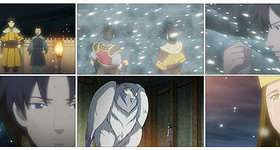 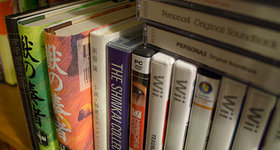 Less than 1 hour before it's 2010. Snow's still lying around pretty thick but I think...

2 Jan 2010, 11:40:30 am
Congrats on getting the Persona 3 Portable OST. I love the new songs they added. I was a bit disappointed with the long version of Soul Phrase as I was expecting a new verse added into the song, but other than that I'm glad I was able to hear the new songs featured in P3P.