Lilan finally calms down and lands aboard the Shinoh's ship. Erin is shocked at the bloody scene before her and the reality that Lilan was responsible for all of it. However, she recovers to go help tend to the wounded. The Shinoh had hit her head and was unconscious. Soon, help from Kazhalm arrives but because they didn't bring any antidote for the Toudah's poisonous fangs, Erin flies back to collect some. The fleet moves to the Kazhalm Noble Halls in case their asssailants attempted to attack again and there, Iyal is blamed for his incompetence. Later, goes to visit his wounded subordinates and finds Erin there. Erin had been waiting for him and tends to his badly wounded right arm. Iyal remembers the words of his master about the country falling apart and speaks out his thoughts to Erin, thinking it was the Grand Duke who attacked them. However, Erin tells him that the Toudahs may not have belong to the Grand Duke because they had no marks on their tails. She also goes onto explaining about her past.

Six days after the attempted assasination, the Shinoh recovers and invites Erin for dinner as thanks for saving them. There, Damiya orders her to use Lilan once again to escort the Shinoh back to the capital but Erin refuses even if though it would mean a death sentence for her and Kazhalm. However, having been given a single of wish of anything she desired, Erin chooses to speak to the Shinoh in private with only Iyal present. After being left alone, Erin finds out the Shinoh really didn't know anything why the King Beast Laws were enacted and decides to reveal the Great Sin and of her own past. The Shinoh is shocked that her ancestor was a sinner but after hearing Iyal's opinion that there was a great conspiracy going on within the country, she is determined to do what she can to maintain the peace. Just as Erin happily returns to Kazhalm thinking she will never have to use Lilan or other King Beasts for horrific deeds any more, Ethal arrives with some bad news. The Shinoh had passed away.

With Harumiya having deceased before returning to the capitial, Semiya ascends the throne without knowing the truth thinking that the Grand Duke was the one responsible for the attack. For that reason, he decides not to choose Shunan as her husband to give birth to the next Shinoh. Meanwhile, Shunan urges his father to think about their future as they may have to rebel against the Shinoh to live on under the current circumstances. However, he had another idea in mind and decides to visit the palace. There he tries to clear the Grand Duke's name by insisting they wouldn't need to resort to an assassination if they truly wanted the throne. He also challenges Semiya in her ability to rule the country and shows all the wounded "Wajaks" that she never knew about. Later in a raining evening, Shunan meets with Semiya privately and suggests they get married for the sake of the country. Semiya is hurt, thinking Shunan didn't really love her and refuses. As a result, the two separates agreeing that either Semiya commands an army of King Beasts at Tahai Sei plains to prove she is a god like her ancestors or, Shunan will show off the Grand Duke's might by marching a horde of Toudahs to the border until she raises a blue flag to surrender and agree to marriage.

Officials are sent from the capital to take Lilan away but Erin refuses to cooperate. Lilan recognises the men were the very same people who had captured her before and angrily attacks them before they could use the Soundless Whistle. Erin shouts at the enraged Lilan trying to stop her ut realising Lilan would no longer listen, she finally decides to use whistle for the very first time before passing out. She dreams of her mother Soyon and what she had been told before about beasts. Not later, she wakes to find some of her fingers had been torn away by Lilan when she tried to stop her. Despite that, she was keen on continuing to look after Lilan although now, she truly understood why her mother looked so sad taking care of the Toudahs and was ready to change her own ways to look after the King Beasts. She is escorted to the capital. Meanwhile, Kiriku wonders if what he was doing was right - Was all this neccesary to keep the country's peace as Damiya says? Did he really have to help trap Erin inside "a cage" like how his sister was long ago?

Then again, the romance wouldn't be strong if there isn't something to tear couples apart in stories.

Well, at least things are going well between Iyal and Erin... Ouchy for her lost fingers. I think Erin's voice actress overdid the serious tone when she was explaining about the Great Sin. It just lost emotion for that part of the show.

So is the moral of this story to say that one should live life to the fullest despite the difficulties and you'll be able to overcome all or, is it saying that people have to learn things the hard way despite all the lessons history can teach us? Or even both? 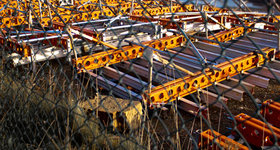 The new M74 highway here has been under construction for some time now and I always... 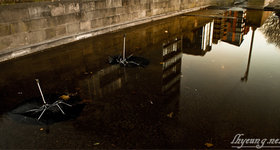