Finally decided to take the plunge and went for a DSLR because I like taking night photography and it's difficult to snap them without much noise on the Canon Powershot A720 IS. Not to mention I also wanted to snap photos in RAW so that they don't suffer from lossy JPEG compression (in theory).

Somehow, I ended up with yet another Sony product and what's more, I also coincidentally got a model that's in the same series as the one Icie went for only, my one is the lower-end model - The DSLR-A200K. The "K" standing for "kit" meaning the box comes with a lens instead of just the camera body.

I actually picked this up on the day before I left for HK and spent the day out in town playing about with it until late in the evening. 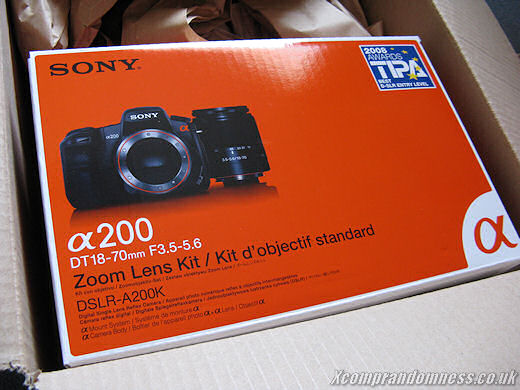 Unlike compacts, SLRs have detachable lens one can change depending on the situation you want to shoot. In this case it's a SAL-1870 zoom lens, 18 - 70mm f3.5-5.6 complete with a lens hood to block out flare from light sources such as the sun's rays. Zoom lens seem to be more versatile allowing you to have a bit of wide angle for capturing large landscapes, standard shots and a bit of zooming in.

Of course, it means you'll have to be very careful and change the lens quickly so that dust doesn't enter the camera body or the lens itself. The A200 seems to have a self-cleaning function which helps you with this problem, vibrating the camera whenever you turn it off to help shake off any dust. You're still going to have to give it a clean now and then though. 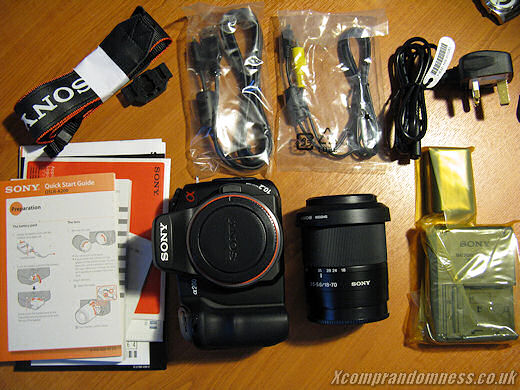 First thing I liked during the early experience of using a DSLR was that it had individual buttons to change the main camera settings that affect the outcome of your photos namely the aperture and exposure times. It's also great to be able to twist the lens to adjust focus instead of having to go through multiple button presses through the software menu. 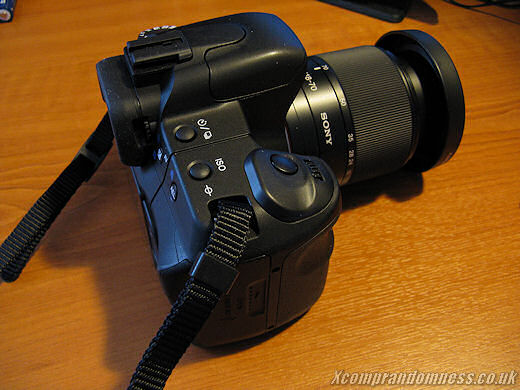 The downside with this low-end model is there is no live view meaning, you can't see what the results look like on the LCD screen before you snap a picture whereas with compacts, you can. You'll have to snap the picture first then check it on the screen. This is quite a problem if you choose to shoot in 16:9 ratio because the optical view finder on the A200 doesn't show what's cut off in the final picture. You're going to have to pay a bit more and go for the A350 if you're used to live view.

It also means you have to stick your eye against the optical view finder for every shot but fortunately inside the viewer, you'll see a mini yellow LCD indicating any camera shake. Just like all modern cameras, it has an image stabiliser feature to minimise any blurring caused by shaky hands. With the A200, you have something called "Super SteadyShot" which can be toggled on or off using a hardware switch and it works very well. As you focus the camera, there is a meter showing how much shaking there is on a scale of five which is handy so that you know when the camera is steady enough to minimise blurring. 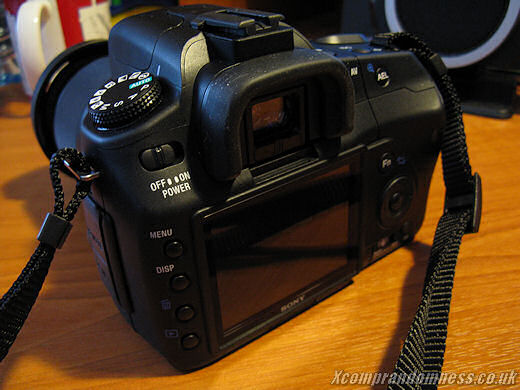 The A200's main storage are Compact Flash cards and not Sony's own Memory Sticks surprisingly. It does support Memory Sticks but, don't go thinking you can just use one of your old PSP cards because you'll need an adaptor for it and it's not included. You have to buy one instead! Taking RAWs means you'll need plenty of storage. At 10MP, you can only store 500 on an 8GB card.

It comes with an "InfoLITHIUM" NP-FM500H 1600mAh battery pack so you won't have to worry about getting some batteries for it and the great thing about this kind of lithium-ion battery is it gives a much more accurate power percentage indicator instead of just a simple battery sign. Charging took 3 hours and 4 if you want it fully charged. 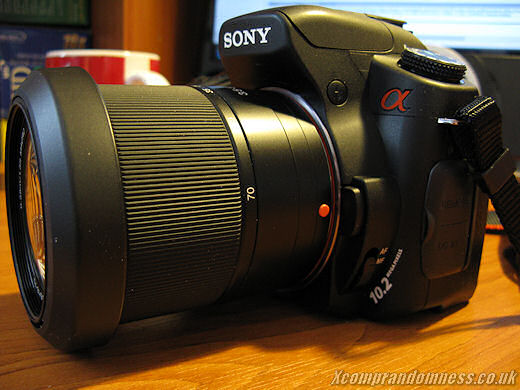 Sony claims you can get 750 shots out of it but as a rough gauge, I managed about 500 shots without flash and the LCD screen at full brightness before it was depleted after a normal charge. I think it's kind of odd how the charging light turns off and then you have to wait an hour for the battery to be "fully charged". Why couldn't they have the LED light change colours instead? It's hard to gauge if it's been an hour since the light went off. 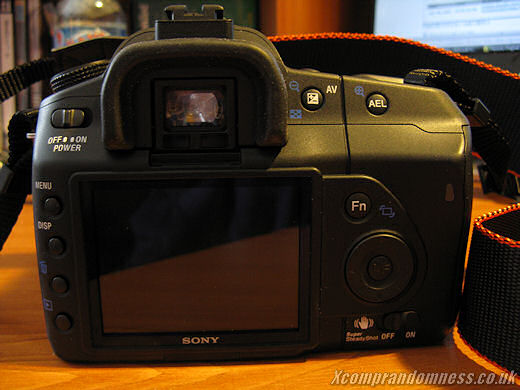 Here are a bundle of test shots that I took in town, all with the Dynamic Range Optimiser on average and the lens at 18mm wide angle which captures a lot more horizontal scenery than your average 35mm compact "point and shoot".

Crossing down by Union Street where a lot of the food outlets are concentrated. 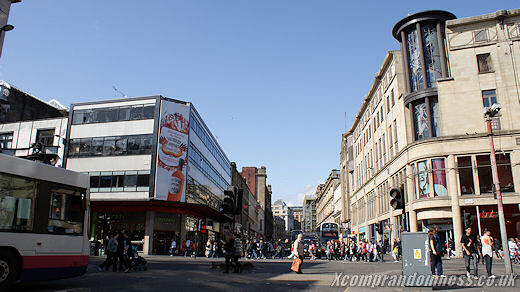 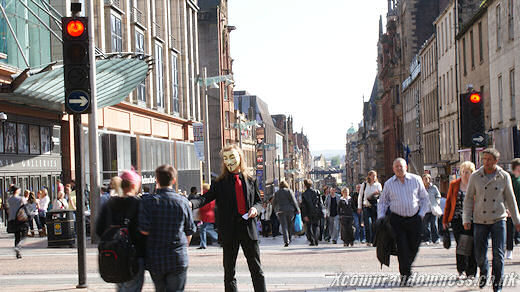 Testing out the 3.9x, 80mm zoom by pointing it upwards towards the moon above a two story building. 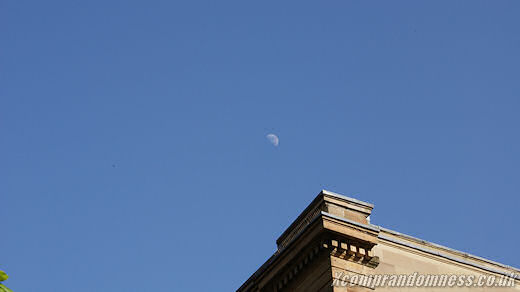 At Castle Street where you'll find the Glasgow Cathedral. 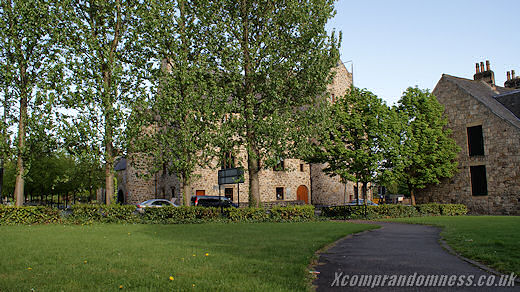 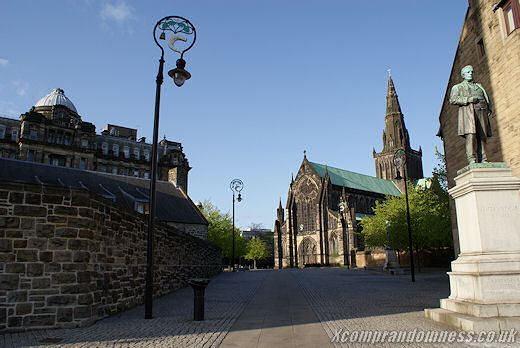 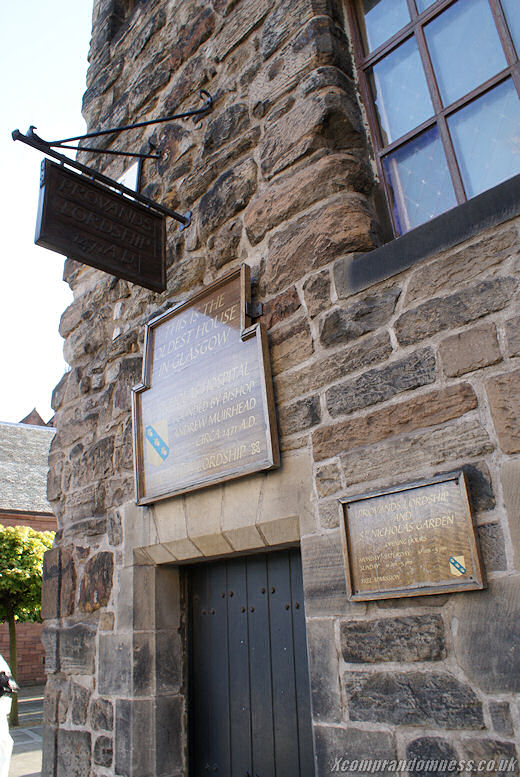 "Bells Bridge", one of the twenty odd bridges along the River Clyde in Glasgow. They just built and opened another. 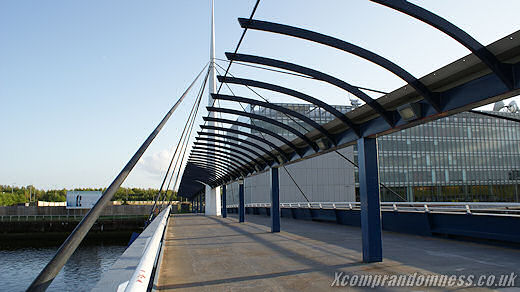 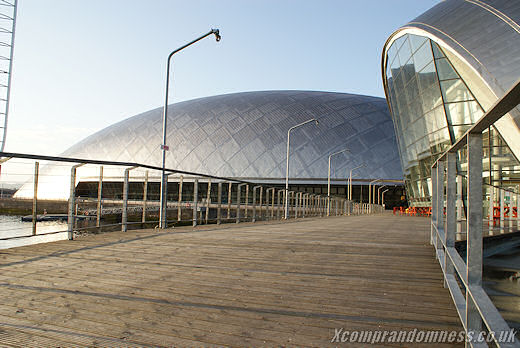 Still learning about photography so I'm not too sure why the Glasgow Tower bends inwards as it gets higher. Maybe it's because I shot the portrait at wide angle 18mm. I should have used 35mm but it was very hard to fit the whole tower in at that focal length. 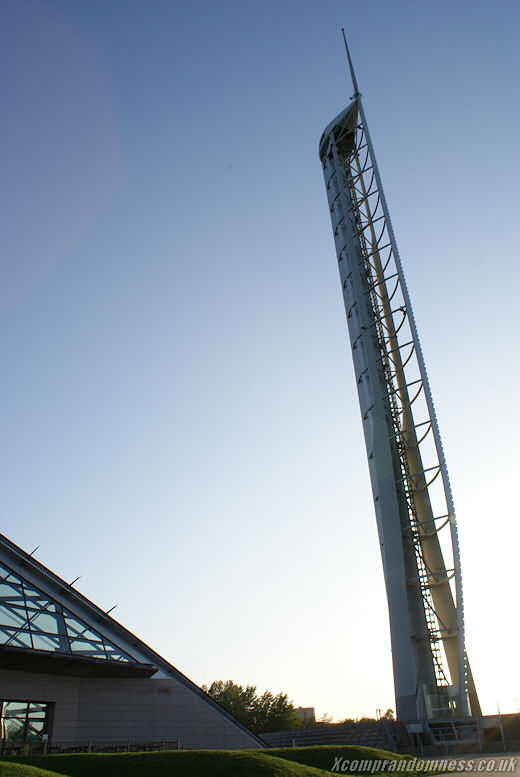 The Glasgow Arch which is another of the bridges and probably the best looking one in my opinion. It was featured in my blog's old layout banners. 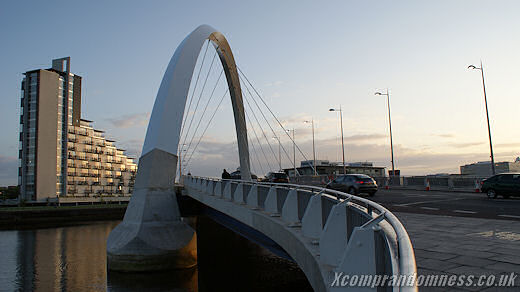 Note the specifications for the SAL-1870 state it can only go as close as 38cm for macro shots but, I managed to go in closer than that at around 20cm. Still can't beat the Canon Powershot A720 IS compact's less than 1cm however.

At the end of the day, I notice the quality between the Sony A200's RAWs and Canon A720 JPEGs don't really look much difference viewing them at full size.

Perhaps what's best about this DSLR is there's less noise during low lit conditions thanks to the better noise reduction algorithm which you can toggle on or off and set its strength - Something that can't be done on the A720. It also has a greater dynamic range (i.e. difference between the light and dark areas) and much more vivid colours thanks partly to the bigger sensor which is double that of compacts at the time of writing.

So in conclusion, it really is better to shoot with a DSLR if you want your photos at their best. 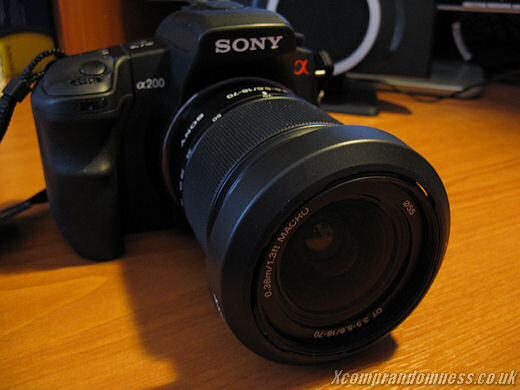 If you ever do decide to go for a DSLR however, bear in mind they can't record videos and there are overhead costs. You'll most likely be buying a new memory card and a bag for it as with a new compact and if you become really enthusiastic you'll be buying multiple lens that can costs over £500 each too.

I'll have to agree with the reviews on TestFreaks and Amazon about the Sony DSLR-A200 being at a good price point for a DSLR and if like me, you're just starting out on photography and don't want to spend time picking a lens, why not just go for the kit lens that has a bit of everything? 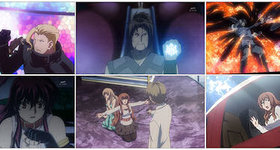 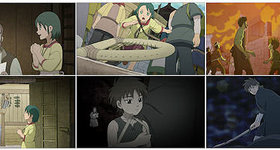 30 Jul 2009, 1:06:33 pm
Well, compared to JPEGs it's little and I didn't really see much difference in photo quality when shooting in RAW. Otherwise yes, 500's enough depending on how many foreign places you end up visiting or if you need to use burst mode to capture those action moments since there's no video ;)

30 Jul 2009, 5:43:24 am
Late comment on this, but I really only use Live View for quick light level metering before I shoot (usually in full manual mode). I compose almost entirely with the optical viewfinder. That's why I got an A350.

Also, "only" 500 on 8GB is not little! Unless you are in Japan... XD I have two 8GB cards and most of my shoots I never have to jump onto the second card. But then I have a very conservative trigger finger.

Sony gets a lot of flak for perceived noise problems with the sensors (I suspect it's the camera noise reduction algorithm which is to blame), but one fun thing about them is you can get relatively cheap and good classic Minolta lenses.

30 May 2009, 7:04:39 am
It can indeed except as you say they're expensive and very few can do video. Don't want to spend too much until I'm more familiar with photography so that's why I ended up with the low end Sony kit ^^;