This is Central where another of the tourist "traps" are, Victoria Peak. I've visited the place before as a kid but didn't really appreciate the view at the time so having taken an interest in photography, I decided to go again for the view and some night shots. 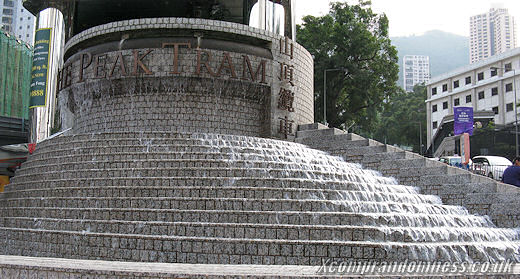 Dropped by Cafe de Coral for some chicken beef burger sausage rice . It's not bad. The sauce is nice and the chicken burger isn't just made up of chicken meat which is what I was expecting. 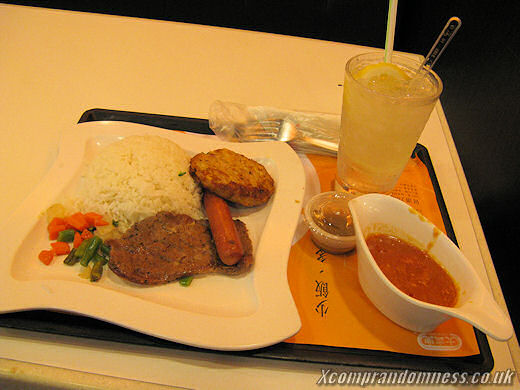 Central's another place where you can travel on the traditional trams. 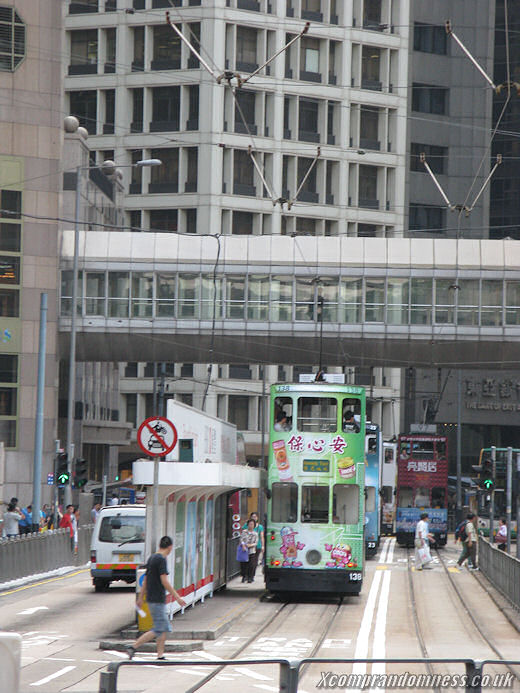 As you follow the signs and make your way up the steep slope towards the peak from the MTR station... 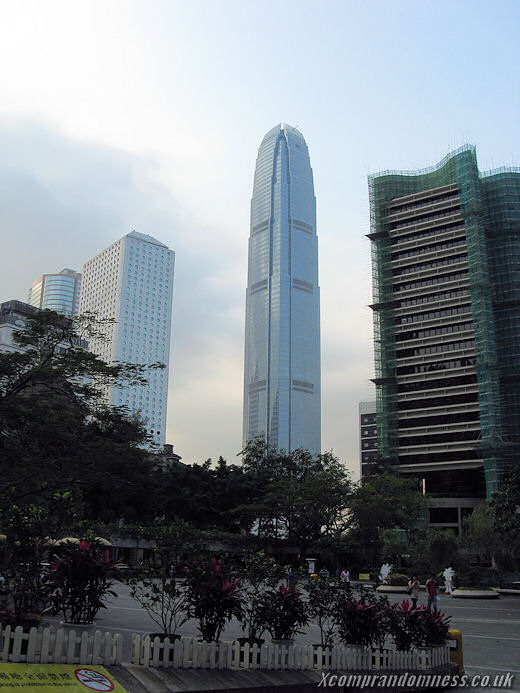 You'll notice all the skyscrapers and buildings that make up the view you'll see once you get up or from the harbour. This is the HSBC building with its infamous "twin cannons" at the top.

I'm sure any photographers interested will find plenty to shoot around here. 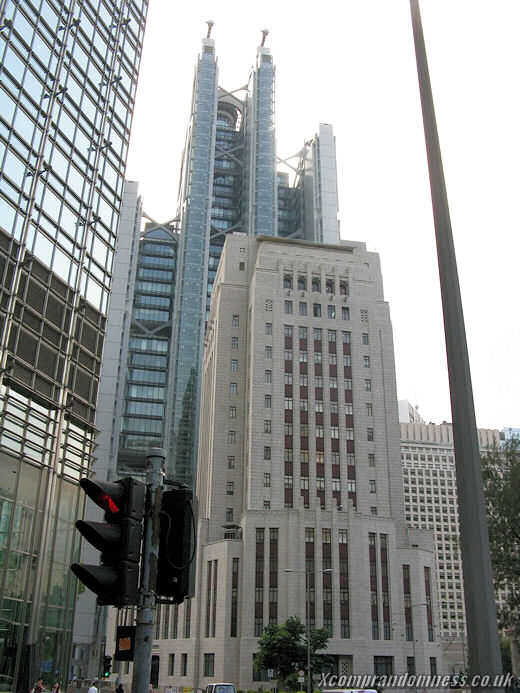 As you enter the tram station you'll get your picture taken and it's optional whether you want to pay for it. 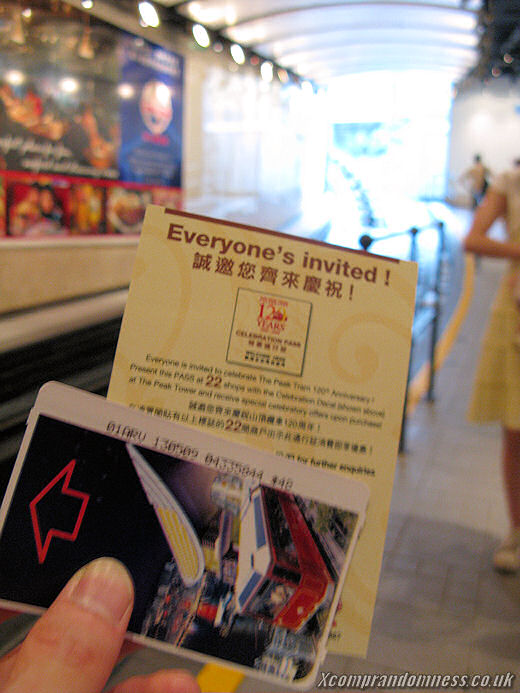 You can go for just the tram ticket to go up to the peak or go for a Sky Pass so that you can go out on the higher deck for a better view of the city. 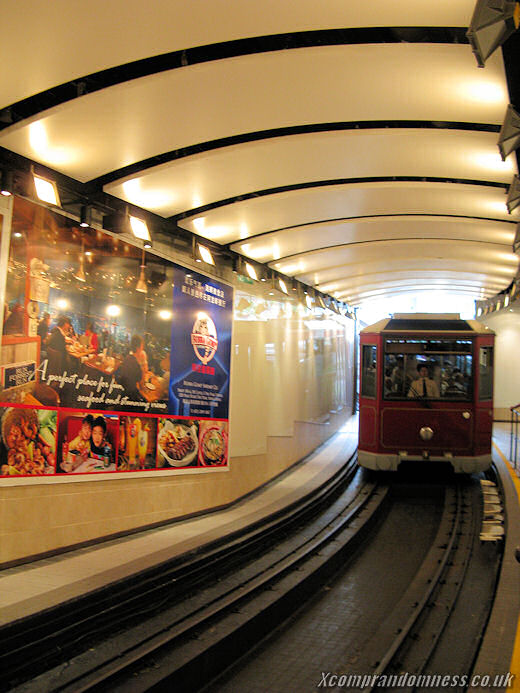 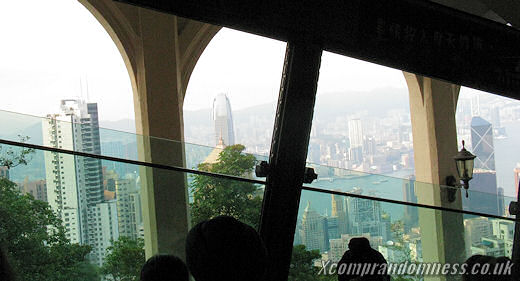 Decided to go up during the day so that I could get some daytime shots too.

Once again, the Octopus card has its use here. Pay $5 to use the binoculars. 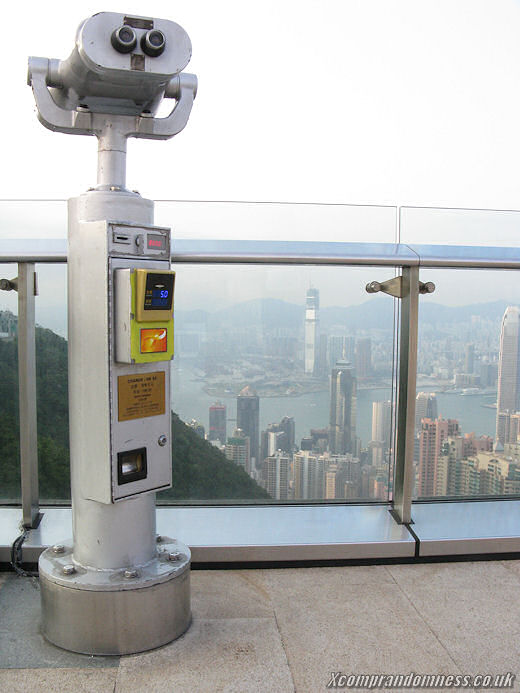 Some panels about the Central area which includes info on the Peak Tram of course. Not many were reading them mind you ^^; 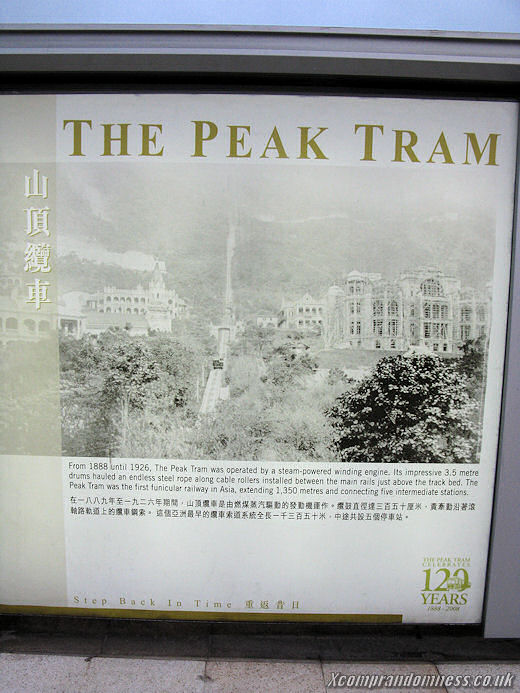 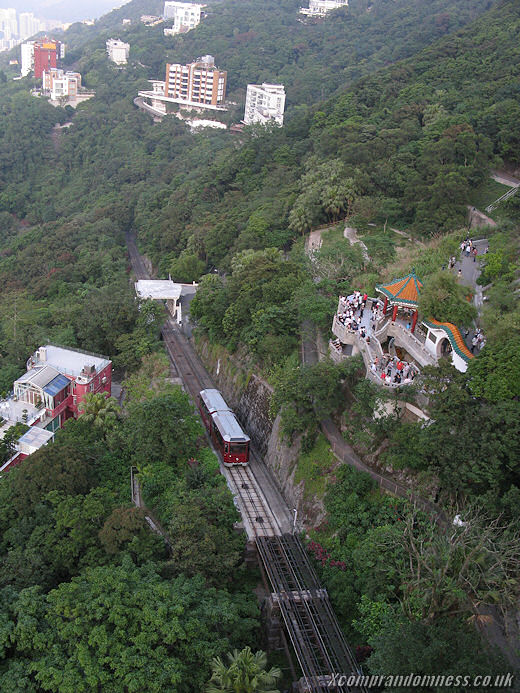 Had to wait for a few hours before it got dark so I decided to mess around with the "Do not climb" signs... 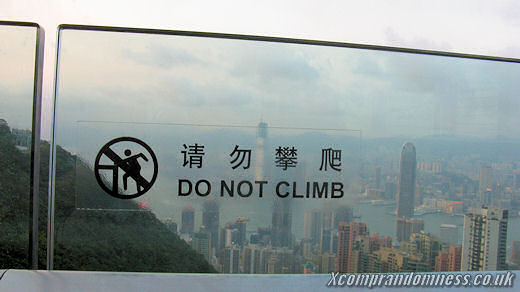 Spoke to one of the tourists there who was a Norwegian doing IT management. He was saying how Norwegians aren't any good at logistics and only know how to dig for oil... Anyone from Norway agree?

A TV crew was here I think but they were just shooting the city. There were more and more people gathering as it was getting darker... Bugs too. 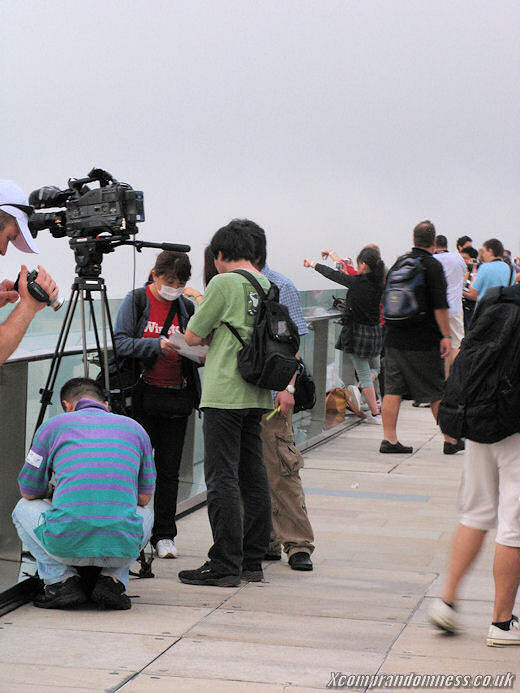 Once you've used your pass to go up here, you can't go down and use it again so if you're early, you can only wait or buy a second pass. Some of the tourists didn't know and ended up buying another. 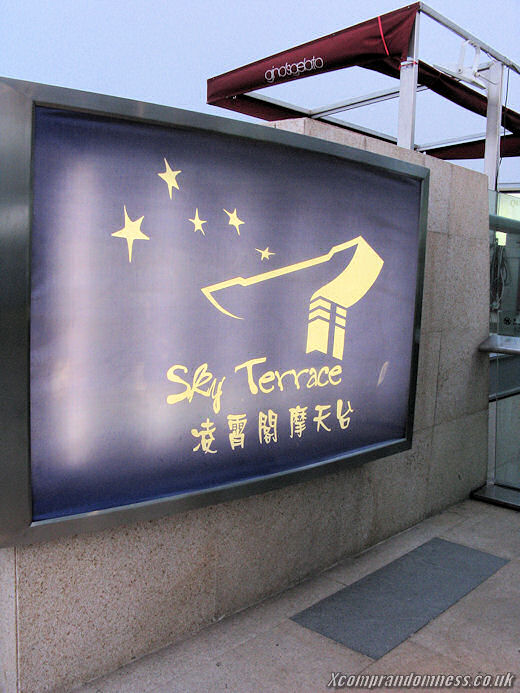 Was using a mini tripod but it still wasn't easy because there wasn't anywhere to stand it.

I managed to find the flexible Gorilla Pod, Icie uses but again, not sure how long my interest in photography will last so I didn't pick it up. 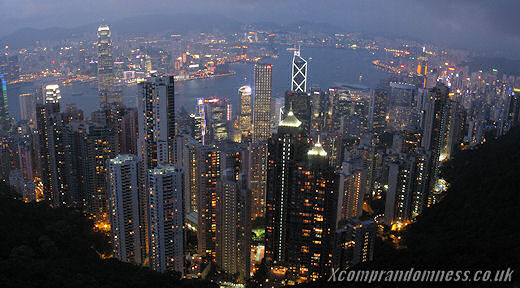 You can make out the clock tower by the Hong Kong Culture Centre at Tsim Sha Tsui harbour.

Couldn't get one single good shot at 6x zoom unfortunately. 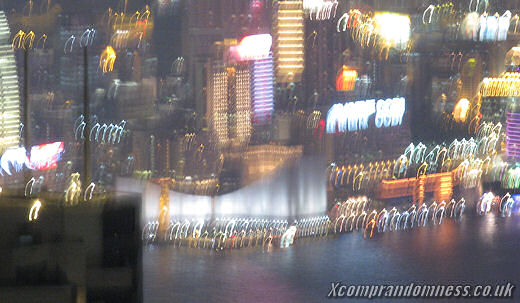 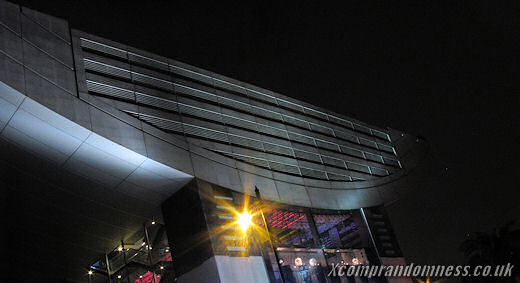 The crowd isn't so big at this time of night. 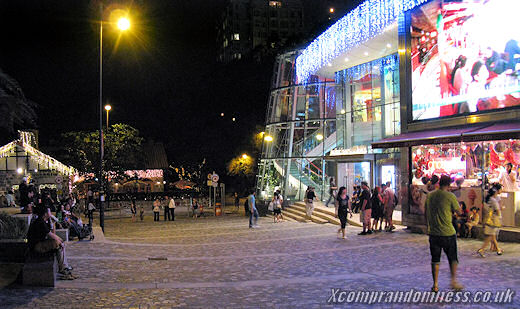 And heading back down to the MTR, all the skyscrapers lit up. Didn't use a tripod for these shots. 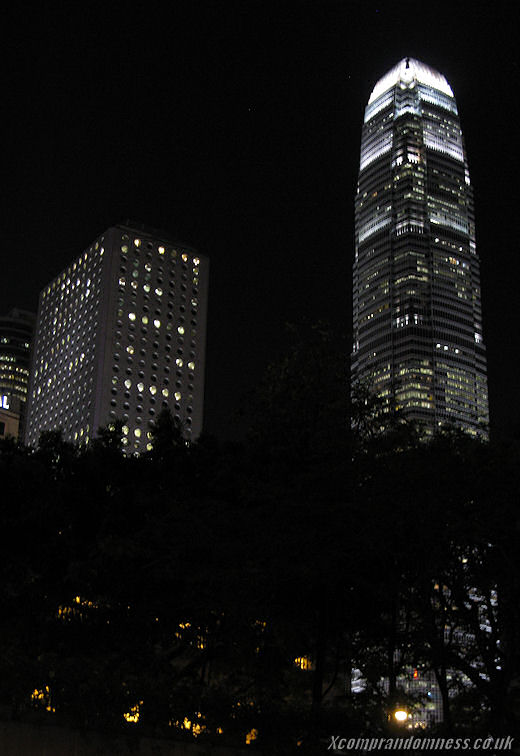 There was a number of couples out in tuxedos and extravagant prom dresses getting their photos taken. 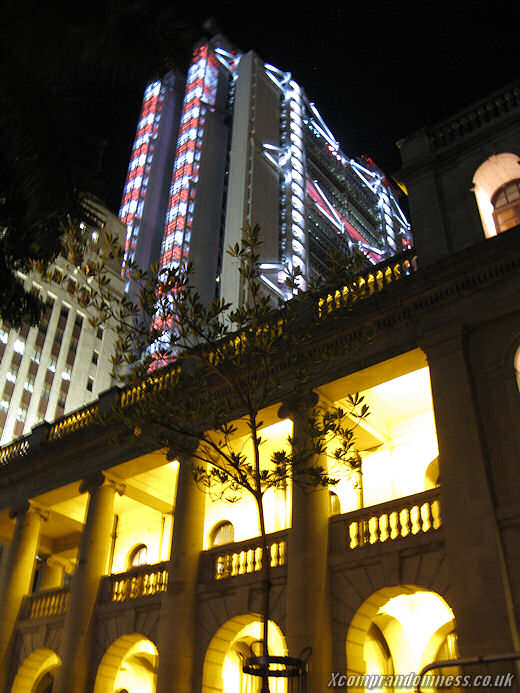 Dropped by to have a regular chicken bowl at Yoshinoya. 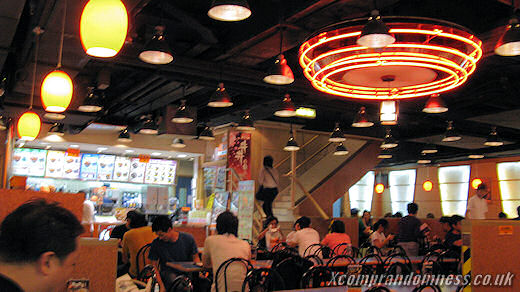 Glad the photos turned out well enough for panorama merges. 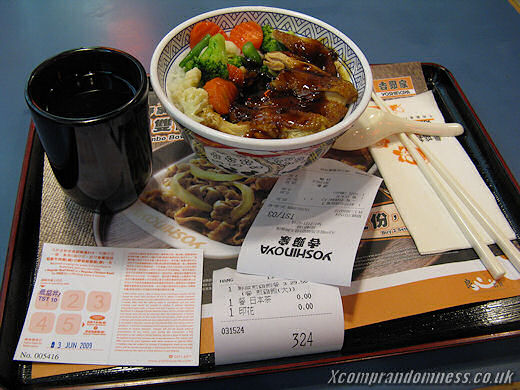 Tempted to get a better compact, namely the Panasonic Lumix LX3 for its bigger sensor (1/1.63 instead of 1/2.5), 24mm wide angle lens and support for stereo 720p HD video but, the downside is I'll be stuck with 2.5x zoom only and 6x is really the minimum if I'm going to be recording events like the Chinese Channel Happy Family Gala from last year. 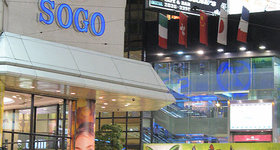 Spent some time going around the stores to see if I could find some of the import goods... 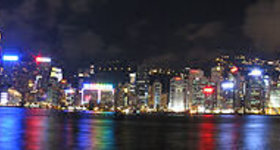 Tsim Sha Tsui's a place that I always visit at least once whenever I'm in Hong Kong on...