I did not know this show is being shown overseas in the US and Korea at the same time as Japan... Maybe I should just stop blogging this.

Kurokami The Animation Episode 2
The Contract

Keita couldn't help stop thinking about what Kuro had told him about the Doppeliner System. It seemed completely absurd yet, he believes it because of everything that's happened so far. The idea was affecting him. He was getting late to school and wasn't concentrating much in class. One evening, he returns home to find an unexpected visitor. 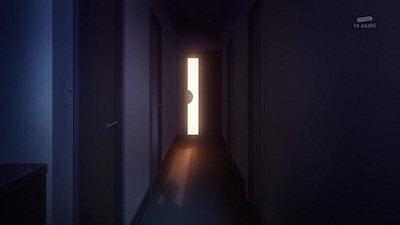 Rummaging in his fridge was Kuro who finds a cabbage and munches away happily at the leaves. She explains she was starved and it was PuniPuni who recognised his scent and lead her to his home. She passed out outside and Akane let her in after hearing how Keita had treated her to a bowl of Ramen. However, Keita did not welcome her. He demands she left right away because he didn't want to get involved in anything strange again. Kuro puts down the cabbage, apologises and runs out the door. Akane tries to stop her but is told to leave too, Keita claiming he already had dinner so she didn't have to cook for him. 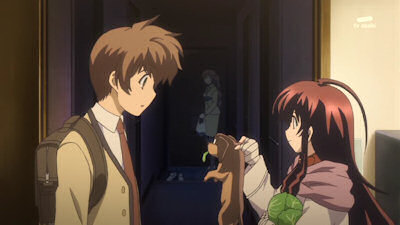 Left alone in the house again, Keita looks at the bag of groceries and rice balls Akane had brought back with her. Thinking back to how Kuro was, he rushes out to look for her carrying the bag. After looking at several places, he finally finds her. She eats away happily at the rice balls while answering Keita's questions about who she was. She explains once again she was Kuro, a Tera Guardian who was responsible for keeping the balance of existence and goes into a little more detail about how every human's soul is divided into three according to their fate. Their Tera energy can be referred to as their "fortune". When two of them meet, the one with the weaker fortune is destroyed due to the rules of the system and their fortune is returned to the one who possesses the greatest fortune of all. Once the fortune of both weaker subs are absorbed, the "Master Root" is complete. 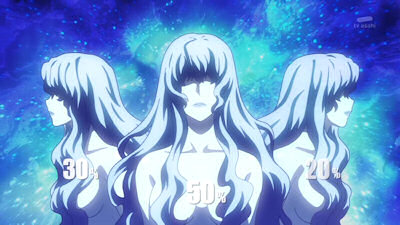 Their conversation is interrupted when a group of men surrounds them. They were the Tribal Ends who were granted powers by the most powerful Tera Guardians, The Lion Tribe. Their leader Seiji wasn't pleased that an exiled Guardian managed to defeat one of his servants and had decided to go hunt for the prey personally. He had already killed four other stray Guardians, absorbing their superior Tera energy so that he can reach a higher status. 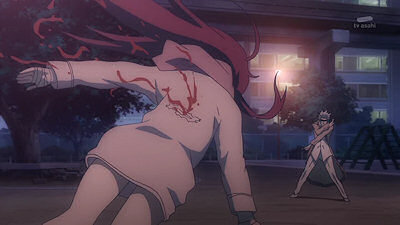 Kuro recognised the "Exceed" abilities he had gained right away but was still no match for him. Ketai tries to help by calling the police and as a result, ends up irritating Seiji. Watching Keita get killed, Kuro rushes an attack and quickly escapes with the dead Keita. Reaching a deserted warehouse, Kuro creates a contract with Keita to revive him. An emblem appears on their hands. 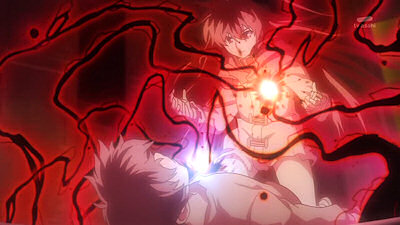 Seiji finds them and laughs, claiming that Keita will just be a burden for her. He attacks once again. Kuro is overpowered until both she and Keita realises what Seiji's Exceed ability was. A whip created from the wind. As Kuro is smashed into the ground and grabs onto some live wires to electrocute Seiji, the emblems suddenly glow. Keita unleashes a burst of energy and Seiji is beaten by Kuro. 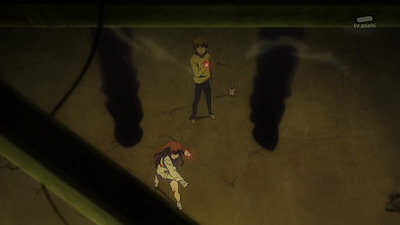 I burst out laughing when I saw Kuro in the fridge. She looked like a rabbit munching on that cabbage! Felt sorry to see her told to leave like that but, guess it couldn't be helped. At least Keita found his conscience afterwards.

Not a bad episode besides seeing another contract making scene in an Anime show. The fighting scene was fluid and I can still feel the impact in the fights. Lets just hope they don't repeat the Doppliner explaination from scratch again and throw in just a little bit more detail to advance the story. 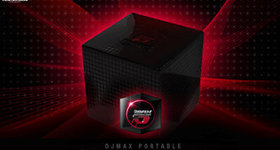 There's not much I can say about this latest title in the DJ Max Portable series... 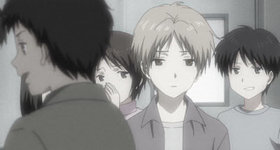