Episode 23 Summary - The Mask of Schneizel

Suzaku and Lelouch sit before their screens in disbelief as the dear person they thought was dead was sitting alive before them. 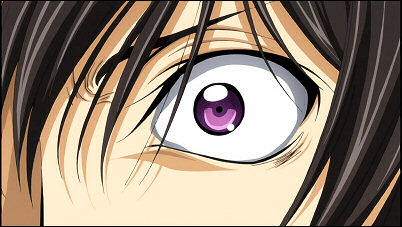 Even though Nunnally found out knew Schneizel had just destroyed the Pendragon Imperial Capital with a FLEIJA bomb, she was planning to stay with him. She had found out Lelouch was Zero all along, using his Geass powers and demands to know why he did all he had done. Was it all for her? Lelouch suddenly recomposes himself, laughing claiming that it was all for himself and that he will show no mercy before cutting Nunnally off.

Of course, Lelouch was putting on an act. He was furious Schneizel had managed to capture his sister and manipulating her now. Suzaku grabs him by the collar and reminds him about the "Zero Requiem" plan they had decided on before, telling him that it shouldn't matter even though they've found out Nunnaly's alive and throws him roughly onto the ground. Leaving, C.C. follows him out and is reminded that he was simply fulfilling his role as Lelouch's knight, eliminating all Lelouch's enemies and weakenesses. He described himself as Lelouch's sword and suggests C.C. should be his shield and protect him. She was an accomplice of his after all. 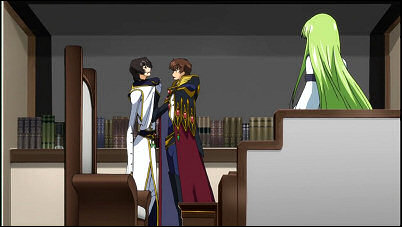 She returns inside to find Lelouch hiding in his room, praising him for keeping his mask up before Schneizel before sitting behind him on the bed, leaning on his back. Lelouch had thought it through and had decided he had made the right decision back inside the World of C. He must push on with his Zero Requiem plan to purge all evil for the people that have died so far during his struggle against his father and now Schneizel.

Meanwhile aboard the Avalon, Nunnally was feeling a little faint. Cornelia and Schneizel kneel down to see if she was all right and learns that she wants to have control of the switch to launch FLEIJA bombs. She wonders if all the people that were at Pendragon were really safe. Cornelia is surprised Schneizel lies they were but says nothing until they return into the main room. She learns his real plans was to enter orbit in space with the Damocles and threaten the world with the FLEIJA bombs which, he had now removed the limiters from, making them even more powerful. Cornelia wasn't going to stand and watch this happen. Drawing her sword she tries to attack but is shot dead. 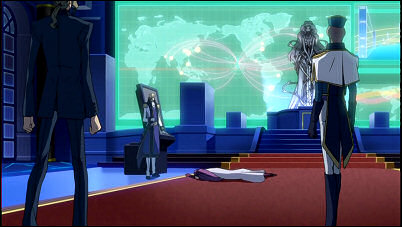 Back at Ashford Academy, a badly wounded Sayoko had managed to escape back to meet Jeremiah and explain she and Nunnally had gotten away safely. What they beleived to have been destroyed when the Tokyo Settlement was bombed was merely a decoy escape craft. Jeremiah wonders why a Japanese like her would still work for Lelouch but they both knew they were being loyal, following the ways of a knight.

By now, the Black Knights had agreed to join forces with Schneizel to overthrow Lelouch and were getting into position around the world, keeping Lelouch's forces at bay. He has a limited amount of troops to alter the situation and that was in Japan. 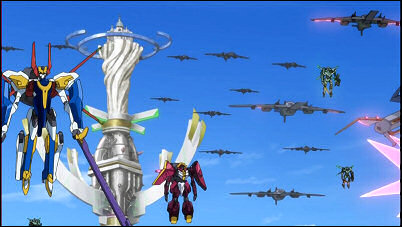 After making their separate speeches, Lelouch greets Schneizel on an open channel. Schneizel suggests Lelouch gives up because he had a FLEIYA warhead prepared but Lelouch isn't worried because he had all the representatives as hostage including Kaguya. Hearing this, Schneizel replies that he doesn't mind sacrificing a few lives for world peace but, Xingke steps in and manages to stop him. In exchange for not using the FLEIJA bomb, he hands over his command of the Black Knights over to him. 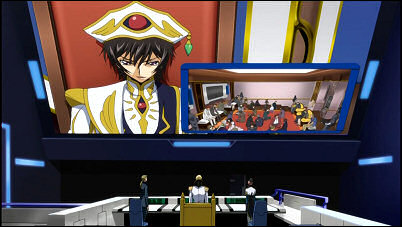 After re-positioning their troops, Schneizel manages to break through Lelouch's formation. The situation was looking bleak until Lelouch pulls out a switch, activating the Sakuradite volcano below. Many of the Black Knights forces are wiped out from the radioactive blasts and the Ikaruga is knocked out of the sky. Ougi thinks back to how he left his beloved and pregnant Viletta back on Horai Island. Fortunately, Tamaki and Kallen manages to save him. 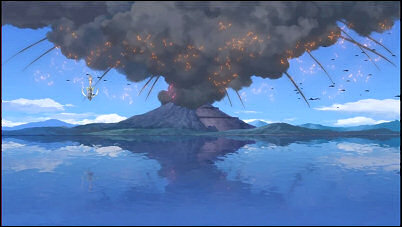 It was Schneizel's turn to strike back, letting Nunnally launch a FLEIJA bomb towards Lelouch. His troops manage to make it trigger its explosion before arriving but Schneizel clearly had the advantage now. He will have to depend on Nina to find a countermeasure but, can he trust her? She hated Zero and wanted revenge for the death of Eupheumia. 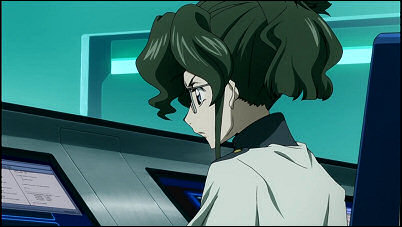 Next episode, "The Sky of Damocles" 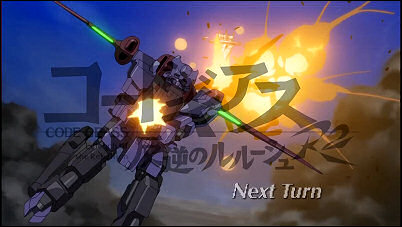 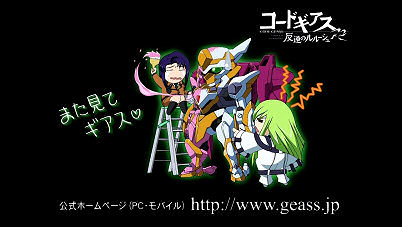 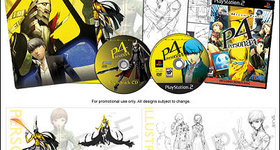 Been a while since I reviewed Persona 4 and didn't think I would be posting anything... 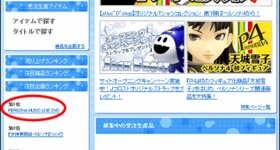 Looks like it could still be some time before we see the Persona Music Live DVD....