With Lelouch being the new Emperor now, the Royal Mausoleum was burned down as the start of a New Britannia. 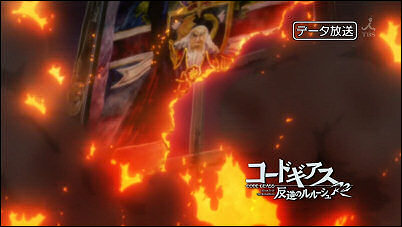 The empire's system was being completely reorganised and the Elevens were also given their names as the Japanese back. The Black Knights were starting wonder if he wasn't just using them after all. However, both Xingke and Toudou knew that it was all superficial and that he had bigger plans.

Lelouch was continuing to use his Geass powers to create more followers while Jeremiah was making examples of the aristocrats that continues to put up resistance. Making their way into the Exelica Garden outside, Lelouch discusses he plans with Suzaku. By destroying Britannia's culture, he will be leaving a mark in history. He was going to spill lots of blood, so much that it will make people forget about Eupheumia's massacre of the Japanese. 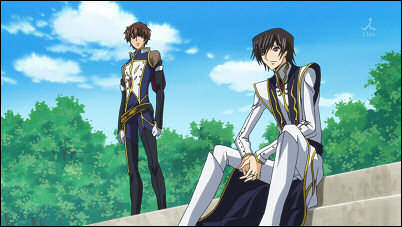 Lelouch closes his eyes for a moment, laughing at himself for planning to conquer the world for the Requiem of Zero. There was one major concern however and that was Schneizel's plans. He is interrupted when a report comes in that four Knights of the Round were approaching in full force to attack them. Suzaku is dispatched in his new Lancelot Albion, one of the Ninth Generation Knightmares, making quick work of the Knights of the Round. He lets Weinberg free to give him some time to think about joining him as he turns to face Waldstein.

It's been a long time since Waldstein used his Geass power that allowed him to see ahead into the future to read his opponent's moves. In fact, Marianne was the last he had to use it on. However, the "Live on!" Geass command that Lelouch placed on Suzaku allowed him to move so much faster, he manages to slash Waldstein's Galahad and Excalibur sword apart. The whole battle was being broadcast worldwide and using this opportunity, Lelouch says that the New Britannia will join the United Federation of Nations. They will have a meeting at Ashford Academy because it was now no longer part of Britannia or any other nation. 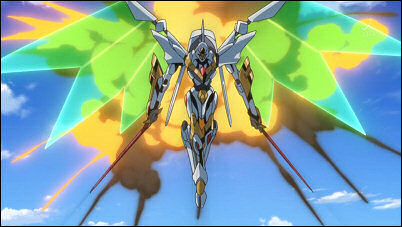 Setting off with C.C. and only a few body guards, Lelouch sets off and soon arrives at Ashford. Seeing him, Rivalz immediately tries to climb over the fence eager to speak to him but is pulled down by the guards. He was angry why he kept everything a secret all this time. Just before he was hit a disguised Nina, who has been in hiding because she was now a wanted criminal, manages to drag him away while in disguise. Lelouch ignores him and walks on over to surprise even Kallen as he greets her formally as if they were strangers. Kallen does the same. 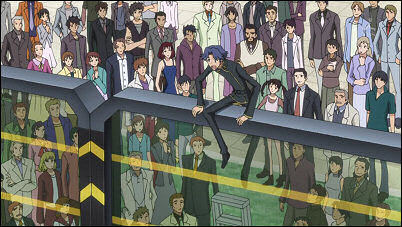 He requests a detour claiming that he was nervous and Kallen agrees. As the two made their way inside, Kallen told him she was grateful that she saved them back at Shinjuku Ghetto and that it was an honour working for him as a Black Knight. However, after learning Zero was Lelouch she began to hesitate and even more now that he was the Emperor, working together with Suzaku. Ougi had told her during the Black Rebellion that Lelouch was the one who was going to carrry on her brother's dream. But what was Lelouch planning now? Does he want power? Status? Or was it just a game?

She halts on the stairs and turns round, asking the same question she asked aboard the Ikaruga. What was she to him? And why did he tell him to live on? Lelouch stays quiet and suddenly gets a kiss from Kallen. They gaze into each other's eye silently for a moment before Kallen says farewell and recomposes herself. Lelouch whispers farewell too after she was out of earshot. 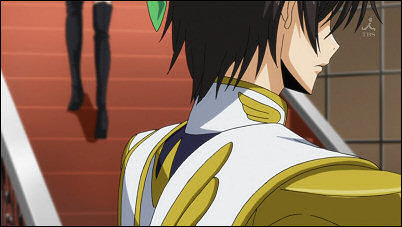 The meeting is soon underway in the gym. Lelouch was going to need two thirds or more of the UFN representatives' votes before Britannia will be approved become a member. Kaguya sets up a screen around Lelouch as a countermeasure against his Geass confirming his belief that only the main members of the Black Knights knew about his power. Those members appear too on the screens inside and the conference is underway. 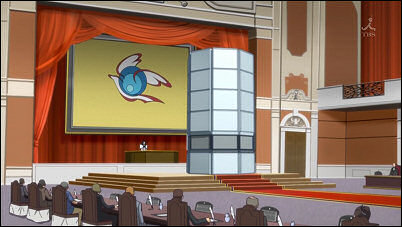 Although it appeared Lelouch's offer to join the UFN was of good will, they know that if he manages to join them, he will end up controlling the federation because the influence of a representive's vote was equal to their nation's population. With the Chinese Federation fallen apart now, Britannia is greatest nation is the world which will give Lelouch over fifty percent influence in the votes. They make him an offer of reducing his influence to twenty percent of his nation's population or dividing his nation but he ignores them. Instead, he asks Kaguya what qualities must one possess to govern the world. Kaguya replies dignity but Lelouch thought different. It was the will to destroy the world and oneself.

Signalling upwards, Suzaku comes crashing through the roof in his Lancelot holding the leaders of the UNF hostage, threatening them to make the correct decision. The Black Knights try to rush out to help but receives reports that the Britannian army was on the move towards Japan. Lelouch was now an enemy of the world. 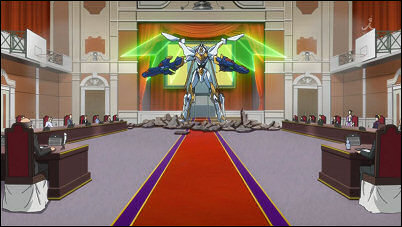 Nina was also captured. Just as everything was working as planned, a report comes in the Imperial Capital of Pendragon by another FLEIJA bomb. A huge fortress with a radius of three kilometres is spotted floating above the one hundred kilometre wide crater. Lelouch is forced to suspend his plans and head over together with Suzaku. Schneizel had made his move, mobiising the Aerial Fortress Damocles just as Lelouch predicted. 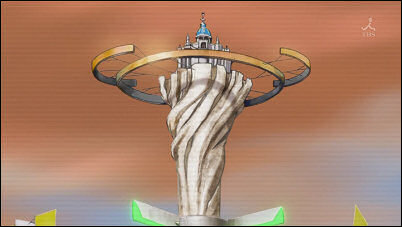 On their way, they find Schneizel contacting them through one of the private communication channels. He tells Lelouch that he never approved of him becoming Emperor and that he has gathered together all the FLEIJA bombs. Lelouch thought it was a challenge for the throne but is surprised to find he wanted Nunally to take over. She was still alive.

Nunnally is their enemy. 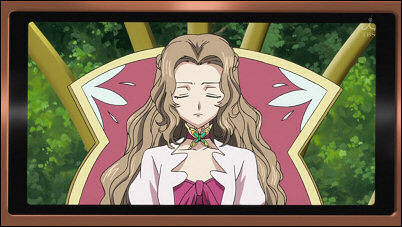 Next episode, "The Mask of Schneizel". 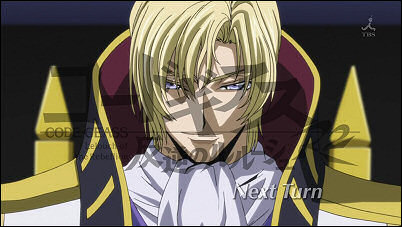 Well the Knights of the Round didn't last long here, did they? It makes me wonder what they were there for in the first place... Opportunities for new Seiyuus? This "overpowered" trend is here to stay it seems and I guess helps save time to work on other parts of the plot rather than the action.

Now isn't Lelouch and Kallen professional, putting aside their personal feelings for the causes. The theme song here used wasn't quite as memorable as "Masquerade" for Shirley but, I guess it's because the parting isn't as sorrowful. Interesting how Nunnally is still alive and has now turned into their enemy. Lelouch's worst fear from the beginning of this season back again only worst.

And that suit Lelouch is wearing... It just screams CLAMP. 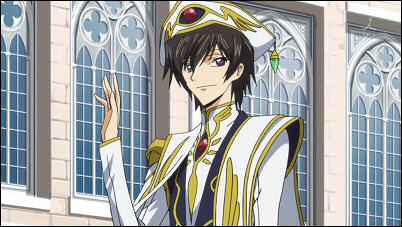 Nice prize this time round. A set of nine Code Geass light novels and the competition entry time was for an entire day. Appears they just started to go on sale this month and is a set of side stories like the CD and picture dramas.

The first volume includes "The Search for the Seven Wonders of the Academy" and a ghost story. According to one of the reviewers on the Amazon, the stories in the book was published in the Newtype Romance magazines. 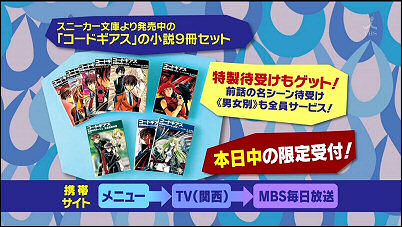 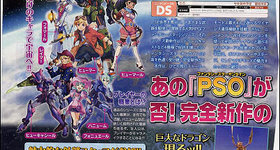 The Nintendo DS is getting its own Phantasy Star RPG title and it's not just a port but... 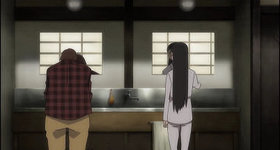 Episode 9 Summary - First Love I was so surprised by the rapid development in their...

also, it appears Damocles has been hinted since the beginning of R2 eh? if you play the OP slowly, you could see a glimpse of damocles in the frame.

I don't like Schneizel's character, he still just stands around and speaks. I'm waiting for him to do fabulous moves like Lelouche!