It appears Chrono Trigger DS will indeed be keeping the 2D graphics it had on the SNES. In this week's Famitsu, players are reminded about what the game's about, showing only what appears on the top screen so we don't know what they plan on doing with the bottom touch screen yet. 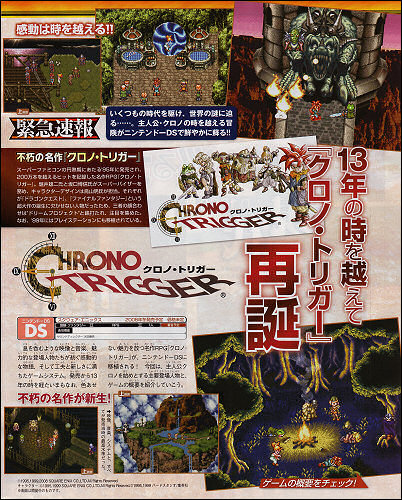 There's a small profile of all the main characters who join in the adventure namely Crono, Marle, Lucca, Frog, Robo, Ayla and Magus. Then there's the different times they travel through. 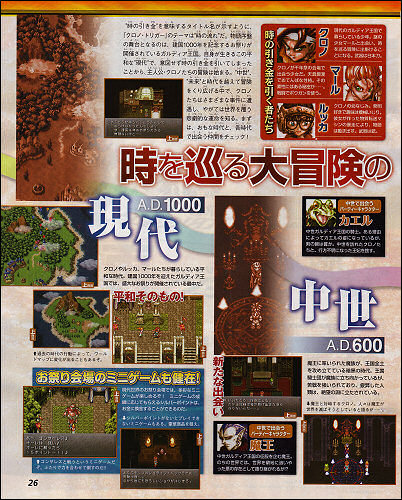 It's been a millennium since the establishment of the Guardia Kingdom and the celebrations are underway. A young man named Crono goes out to join in the festivities and there, he meets a girl named Marle. As they go around the Millennium Fair together, Crono makes an childhood friend again, Lucca who introduces him to her latest invention, a teleporter. When Marle volunteers to give it a try, something suddenly goes wrong as the machine reacts to her pendant and she is transported through a portal. Determined to rescue her, Lucca and Crono gather the courage to jump through too and they find themselves travelling back 400 years in time...

This RPG makes use of the ATB System v2.0 which is similar to the battle system used in Final Fantasy IV except with the following differences: 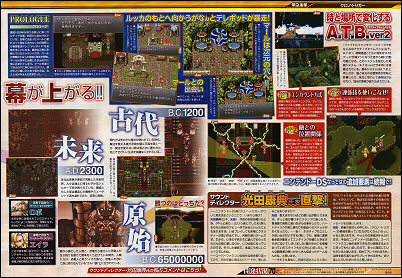 The port is currently 70% complete and hasn't been priced yet. We'll have to wait for some more news to find out what's new new in the DS version. 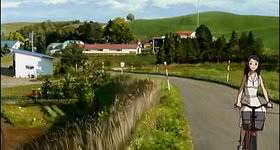 Episode 1 Summary - From Biei It was a fine day on the island of Hokkaido, Biei as young... 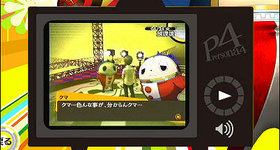 Maybe they'll add a few more wallpapers in the future but, that's all the circles...