Episode 9 Summary, The Bride of Shukinjou

The Black Knights and the now free one million Elevens were approaching their new home amongst the Chinese Federation, an artifically made island named "Horai". It was an island used to generate power for the Japanese people. The Chinese Federation was a nation not without its own problems, the young Tian Zi being manipulated by her own corrupt officials while their own people suffered from their actions. What awaits Zero now? 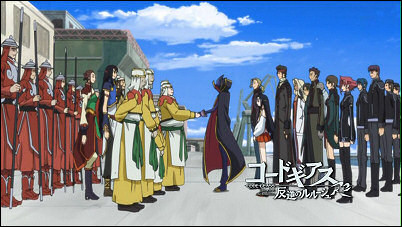 After docking, the Black Knights were making preparations to move onto the new island but still couldn't believe they were accepted by the Chinese Federation. While they were discussing the subject, Tamaki appears laughing at how the Eunich men had their "private parts" removed. Their new supply of Knightmare Frames had also arrived from India which was also another surprise because of the way they were cooperating with the Chinese. Perhaps they wanted to stay on good terms with the Chinese so that they too could gain independence.

Zero on the other hand, was discussing the appropriate candidates to run their new home with Diethard. As he leaves, Kallen wonders if it was a wise decision to trust Diethard because of his actions before but Zero tells her not to worry. He could tell what was on Diethard's mind and that was to turn the symbol known as Zero into a god. 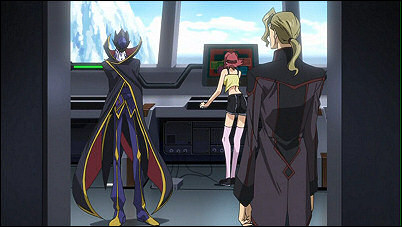 At the same time, Laksharta had almost been busy moving the new modified machinery. She had transferred Gawain's system into Ikaruga and Shinkirou. However, she hadn't managed to salvage the Knight Giga Fortress.

Back inside, as Kallen went about checking the ship's hardware, Lelouch reveals that he plans to overthrow the Chinese Federation by securing Luo Yang. so that he can use their might against Britannia. Kallen was glad to find Lelouch was back to himself after what happened last time when she found him in the old Shinjuku area. Lost in thought, she loses balance when Lelouch calls out to her and ends up falling on top of him. For a moment, she was a bit embarrassed but decides to use the chance to ask why Lelouch returned. 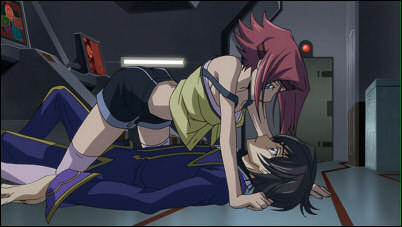 Just as Lelouch was asking Kallen to return with him back to their lives at Ashford Academy after everything was over, C.C. interrupts complaining there wasn't any spicy tabasco sauce on her pizzas. Their little conversation is again interrupted with Kaguya's voice is heard from the speakers.

Arriving on the Ikaruga's main room, they learn they were being invited to a marriage of convenience between Tian Zi and Britannia's First Prince. This means there won't be enough time for Zero to carry out his plan and secure the Chinese Federation's greatest symbol. As a result of this, the Black Knights may end up being used by the Chinese Federation as a gift to Britannia. Someone was thinking ahead of Zero. 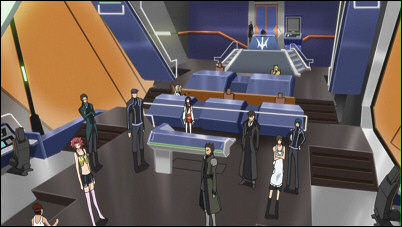 Soon, it was the night of the welcoming banquet. Suzaku was also there and was questioning whether Tian Zi had agreed to her marriage but, Cecile tells him it was an official announcement so they have to believe it. It was supposedly an act of peace. In the meantime, she suggests they should enjoy their time here as guests. Just then, Weinberg carrying one of the decorations used with dishes made with carrot. Neither he or Cecile had known the tradition and had even went ahead to eat it but, Suzaku appeared to be very familiar with the decorations. Anya on the other hand, was making entries in her diary as usual. 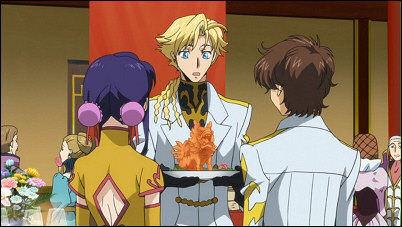 Lloyd was also present because Suzaku had given him a lecture about being a proper fiancée to Milly who he had also invited along to the banquet, dressed in a sensual blue dress. As Earl, Schneizel's right-hand man walks over to greet him, the group go through the formal introductions. He makes a joke about being Schneizel's man at work and at home which makes Milly blush.

Moments later, The Second Prince and Prime Minister of Britannia Schneizel arrives with a surprising partner. Milly had never expected Nina, a former member of her student council, to be here too. As she walked hand in hand with Schneizel, the crowd were murmuring about how she didn't know her place but Schneizel tries to offer her support by reminding her how dignified Euphy was. Suzaku and the other Knights of the Round immediately greets the prince. Seeing Suzaku, Nina takes the opportunity to ask how everyone at the academy was doing and her face lights up when she notices Milly nearby. 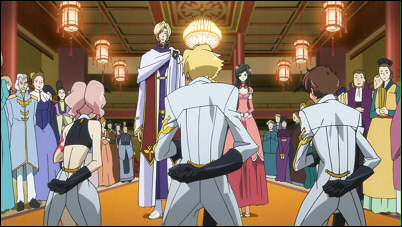 Meanwhile some place else, Xingkue and his followers had some investigation of their own as to why Tian Zi was being married to a Britannian Prince despite the Chinese Federation's rough relationships with Britannia. It turns out Schneizel had arranged it all, offering the Euniches noble status within Britannia.

As they thought about how to stop the Euniches' treachery, Xingkue thinks back to the time he was saved by Tian Zi when he had shown mercy to a prisoner. It was because of that he trained to become an officer so that he could protect and repay Tian Zi. As a promise, he was going to grant her wish to go outside and see the world. 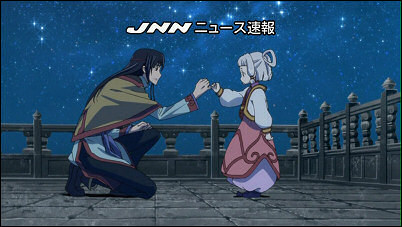 Back to the present at the banquet, the next guest had also arrived but with surprise company. Kaguya had brought Zero with her. Immediately, they were surrounded by guards. The Euniches were indeed going to hand them over to Britannia and their reason for doing so was that they murdered Gao Hai. Lelouch's hunch that Schneizel was behind all this was right. However, the guards are withdrawn after Schneizel steps in saying he didn't want the celebrations ruined.

With the Chinese guards away, the Knights of the Round take their stand to protect the prince. Kaguya also steps into help Zero challenging Suzaku to what he has done so far. Zero doesn't stay quiet either and decides to challenge Schneizel to a game of chess with some high stakes. If he wins, he wanted take Suzaku and remove him from the grounds. That way he will be able to use his Geass on everyone which will be an instant advantage for Zero. On the other hand if Schneizel wins, Zero was to remove his mask. 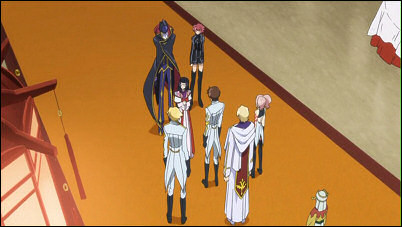 And so, a table and board was set up for the two. Zero was having a hard time playing his older brother who he had never once won against. However, as that was eight years ago, Lelouch was confident he can do better this time. He puts his King forward saying that the leader must go ahead before others will follow. To his surprise, Schneizel does the same. Both continue pushing their Kings forward until they were only one step away. Lelouch tries to call for a draw but Schneizel pushes forward, making an illegal move and putting his King in check. He was challenging Zero by giving him a chance to win but Lelouch's pride would not let him take the move. He draws his King back as the anger wells up in him. 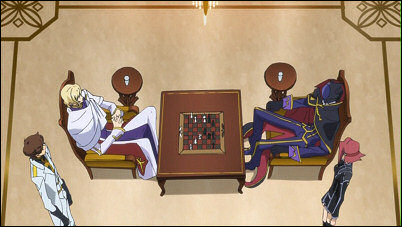 Outside, Milly and Nina had been catching up on how each other were doing but Nina didn't seem to pleased to see her and listen to her concerns. All that was on her mind was still Eupheumia who had risked her life to save her long ago. She didn't care about Milly who to her, was just all talk.

Returning inside, she sees Zero the one who murdered Eupheumia. Unable to control her rage, she rushes forward with a knife but is stopped by Suzaku and Kallen. Milly makes it inside just in time as Nina crumbles to the ground in tears. She was glad to see Kallen was well and how she still cared about them. Eventually, the chess game is cancelled as Schneizel makes sure Zero turns up at the wedding for tomorrow. 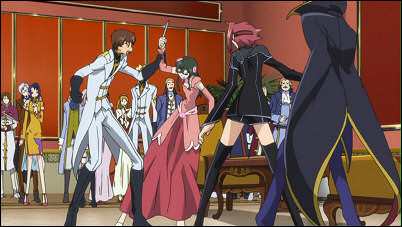 As the next day arrived, Tian Zi thought of how she will finally be able to see the outside world, only she will be a hostage of Britannia after her marriage. Just as the ceremony was beginning, Xingkue barges through the main doors keen to stop the wedding. The live broadcast is cut off as Xingque charges against his own country's guards. As he fought the guards, he was beginning to question his own actions until he remembers the promise he had made with Tian Zi. Tian Zi raises her hand and reassures his thoughts.

Just as Xingkue makes his way towards Tian Zi, Zero suddenly appears holding a gun towards her head. He laughs, pleased that Xingkue managed to give him a helping hand in securing Tian Zi. 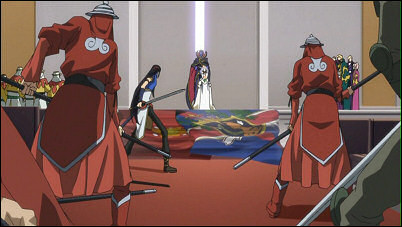 Meanwhile in somewhere else in Britannia, V.V. was revealing Zero's goal to Jeremiah who was ready to face C.C. and Zero. 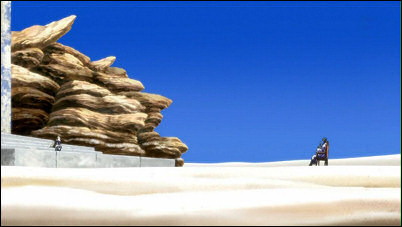 Next episode, "When the Shen Hu Shines" 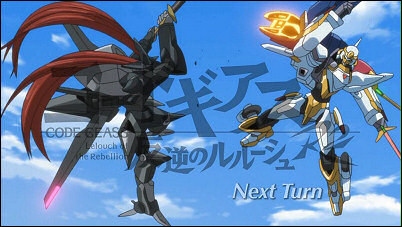 I liked the opening music in this episode which was also used in the last, gave the nice sense of freedom that the Elevens had supposedly gained now.

Although that move by Schneizel was illegal, it was interesting for the story. He appears to be challenging Lelouch and Lelouch seems to be awfully anxious about his older brother because he had always been better than him. This suggests he'll be facing Schenizer in the remainder of the series, maybe a mind battle like that of Death Note between Light and L.

I noticed there was a news bulletin about the Akiba killings. That was quite a tragedy just because a man had become fed up of his life. However, I'm also wondering if someone could have pinned him down sooner if they had known a martial art. Grabbing an opponent charging at you with a weapon, throwing them and pinning them to the ground is very much a basic move. I guess one would never thought of requiring such skills in a place which is supposed to be very safe though. 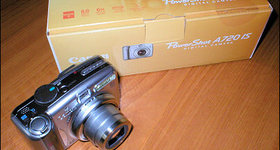 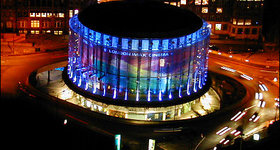