If you browse a lot of Anime blogs then you will probably have seen many photos of the unpacking of the Evangelion 1.01 Limited Edition DVD but, here's my set and my thoughts on the movie. I know the raws and subbed versions of this movie has been up for some time but I decided to hold out so that I watched my own DVDs when my copy arrived from Play-Asia. 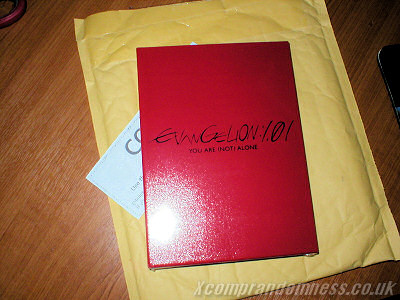 Despite the bland design portrayed by the press, the quality of the exterior red box and packaging somehow makes up for it. 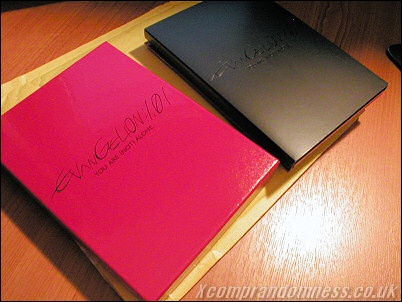 Opening the black case, there's the familiar Nerv logo with a hologram sticker on it. You can't really see the hologram here because of the flash light. 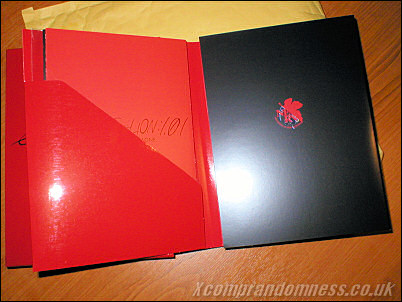 I don't if you can see it but again, even though the disc labels appeared blank in the press photos, they are actually labelled disc one and two. 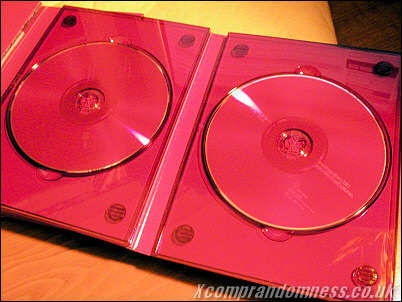 Taking out the booklets, you can see there's a number of leaflets trying to entice you into buying other Eva goods. The OST for this first rebuild movie comes out this week on May 21st. 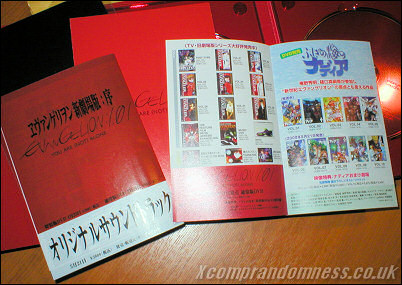 All things Eva including coffee, Misato's cross and the latest Petit Eva DS game. And maybe some Starchild goods too like the live action drama Negima. 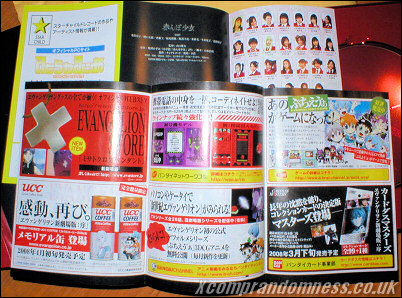 Haven't got your Eva 1.01 LE DVD yet? Animate's package goes one step further giving you a folder, t-shirt, mobile phone strap, clear file case and pamphlet! At extra cost of course... They should name it the "deluxe limited edition". How ironic they put an ad for it inside this LE DVD. 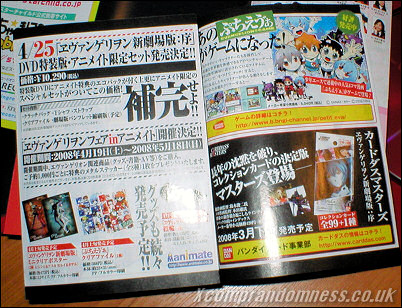 The booklet's actually a long foldout leatlet which introduces you to what the "Rebuild of Evangelion" series is all about, a glossary and what the discs contain.

If you don't know already, the series of "Rebuild" movies is just as the name suggests, a re-telling of the story and making use of modern technology to give the original show a make over such as adding in scenes to clarify ideas, re-composing sceneries and making use of 3D graphics.

This first movie (out of four) covers up to episode six. 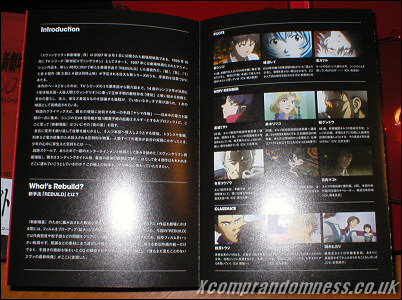 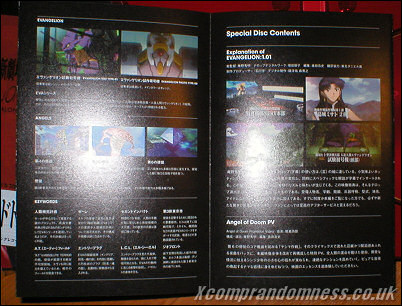 There's not much "making of" material in the leaflet as the advertising leads you to believe. It's not "deluxe" that's for sure. This is accompanied by two nice illustrations of Shinji and Rei though. 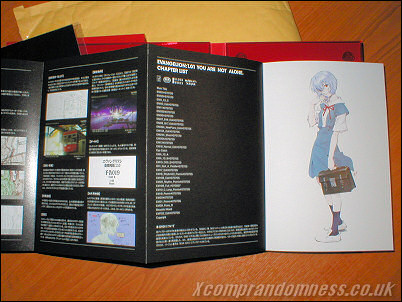 Opening the little pouch and taking out the black cardboard is the film cut itself. The piece of cardboard acts as a stand if you really end up with a good scene. I got one with EVA-01 launching so, I guess I wouldn't be able to sell this for US$2000 like some others. 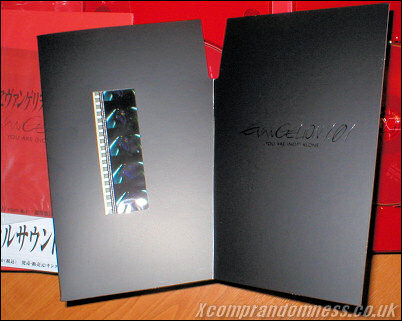 After watching the movie (which seems to cover up to episode seven of the series), I think it's a very good re-telling of the original show. 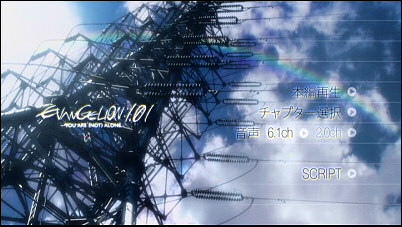 All the 3D modelling and re-composed scenes gave the familiar show a breathe of fresh life. Here's a short comparison. To the left is the Rebuild version and to the right is the original.

New and old structures now together.

The boney insides of the 4th Angel Shamshel made it more hideous and alien looking which was also good.

There's also a number of new scenes too. Look at the giant shells falling from the gatling gun onto vehicles to give a sense of scale. 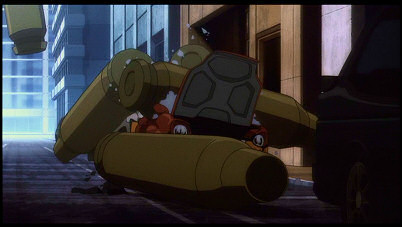 Misato, Ritsuko and Maya on the plane after examining the wreckage scene from the first Angel. Misato talks about how the Evangelion Units are mankind's hope as she gazes at her cross. 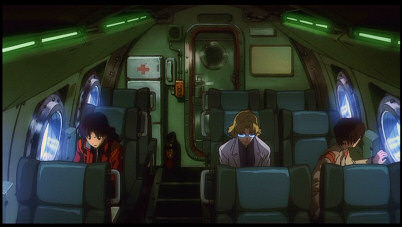 Not a new scene but the 6th Angel Ramiel also gets a little make-over. The Angel's more like an organic being now than a giant spaceship with weapons inside it. It makes a lot of spine-chilling shrieks too now.

The Yashima Operation probably received the most changes. Instead of Shinji missing because of Ramiel's counter fire, we see he misses its core because of a timing error before Ramiel fires back at them. It's also great how they showed all the civilians anxiously looking in the same direction hoping the operation will be successful, emphasising on how important the result of the operation was for everyone not just Nerv. 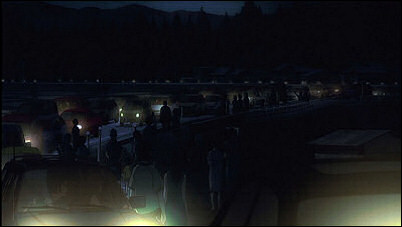 After recovering from the blast, Rei drops in to shield Shinji from Ramiel's second shot just like the original but, it's shown from a different angle and her screen time has been extended by an extra few seconds, letting the viewers watch as the shield shatters slowly bit by bit before her Eva unit starts melting away.

It's more dramatic with the change of scenes, angles and looks better overall.

Here are some of the more notable new scenes that hint the story is going in a different direction. Misato already knows about Lilith being held in the Central Dogma whereas in the show, she has to run her own investigation and get Kaji to tell her. She shows Shinji to let him know that everyone's lives were on the line, not just his. 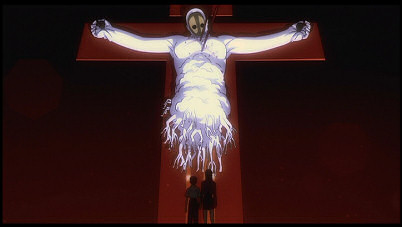 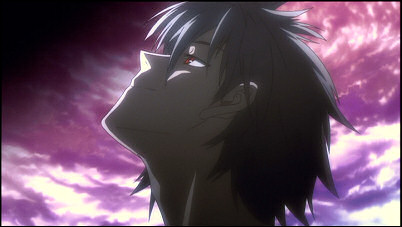 Furthermore, the movie matches with its subtitle "You are (not) alone". There are many new scenes where Shinji is getting support from people.

There's Touji and Kyosuke calling him to say they're cheering him on before they're heading to the shelters. In the original they were also cheering but, it seemed very light-hearted and not much tension about because they were freely sitting about outside. Shinji ends up thinking back to what they said during the operation to show it made a difference.

Misato trying to talk to Shinji to pilot the Eva again before taking him down to Central Dogma as shown above, holding him by the hand. 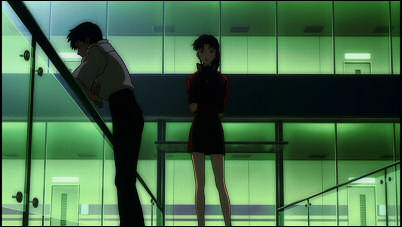 At this rate, I'm wondering if there will be a much happier conclusion than the "End of Evangelion" where Asuka and Shinji becomes the new Adam and Eve or, the confusing original episode 26 where we see Shinji's ideal world before he decides to keep the current one. Neither were satisfying to be honest. 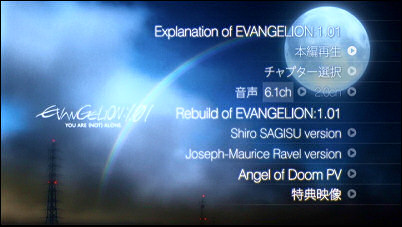 All the "Explanation of Evangelion 1.01" track had was the very same movie as the main DVD except you now have all the familiar giant white subtitles that the original show had, only this time labelling many more scenes. 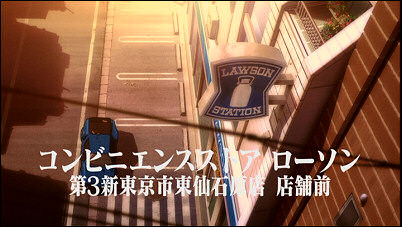 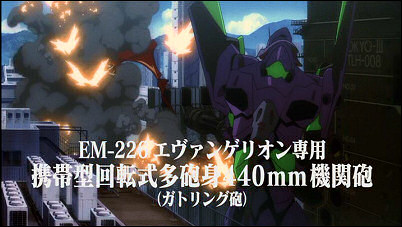 You can watch how scenes were modelled and animated with either Shiro Sagisu or Joseph-Maurice's music which lasts for around 15 minutes. You can see how much work has been put in to give the movie its new modern look and how much of it was re-done in 3D. 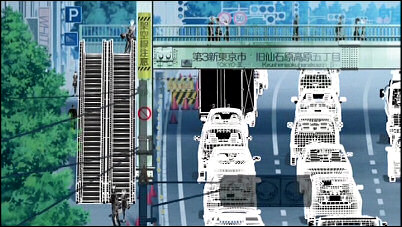 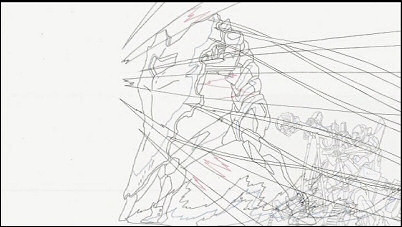 Then there's also a roughly two minute long music video named, "Angel of Doom" and a collection of trailers. I didn't find the PV that interesting really.

You could say they're trying to "milk" all the money they can from the Evangelion franchise but, I don't think it really matters if the quality remains as good as this. In essence, it really is a remake but because the story appears to be heading in a different direction with the extra scenes, it's also a "re-telling" of the original show.

Now I've got Hikaru Utada's song "Beautiful World" on my phone after hearing it in the ending credits. It has such as good flow to it!

I don't own the original series and movies on DVD but I do own this VCD set which was bought many years ago, long before the DVD format was released. I grew up watching Anime but it was whatever shows I managed to catch whenever I was in Hong Kong. I think it wasn't until the mass advertising of Evangelion while I was there that I started to try and get a hold of fansubs and other series. 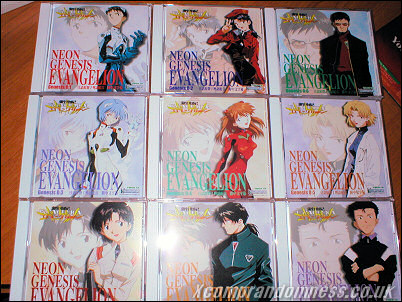 Can't wait for the second movie now and, I hope I get a better film cut with the next LE! 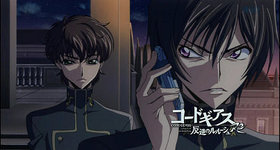 Episode 6 Summary - Operation Ambush on the Pacific Ocean With his dear sister... 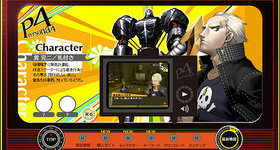 The official P4 website has now been updated with Kanji Tatsumi's profile. Just as...

29 May 2008, 9:37:20 am
Well, there are shops in Japan that put out signs about getting more stock sometime this July but, I really think there won't be a second print unfortunately. Otherwise it wouldn't be a "limited edition" :(

28 May 2008, 3:57:54 am
It got sold out in 3 days so does that mean there is not more Limited edition sets that are going to come out????
if there is going to be a new set of the same Limited edition box set then ill get it just for the strip

That red leftlet was found in my recent manga purchase also.
So there was an Animate “deluxe limited edition” :P