I didn't really have my eye on "Zack & Wiki: Quest for Barbaros' Treasure" because the story and adventure puzzles didn't seem all that appealing. Then the game reached the Western shores of NA and many good reviews, video clips started to crop up on the regular gaming sites I read so, I decided to give Capcom's first foray into the world of point and click adventure games a chance. There's nothing else out until the end of next month anyway if the EU release date for No More Heroes is correct. Loading the game up for the first time, the presentation's pretty much top-notch with its bright colours and comical characters. There's a good variety of environments such as the early jungle, icy caverns and hot volcanoes to explore so unlikely to get bored of the graphics too soon. So many comical ways to "die" but I'm come to that later.

Music and sound effects also add a good sense of grand adventure to the levels. Those who hate English dubs will probably be glad to know the few voice overs are left in their original Japanese form. You'll hear Wiki the monkey cry out, "Za-ku!" instead of "Zack" and the pirate rival Rose shouting the odd, "Chotto!"

Unfortunately, the story isn't quite as interesting just as I had suspected because if you're an Anime fan, you'll most likely have seen the crazy antics of the cast many times before. There's no deep storyline, just short quick moments of comedy. It's far from the levels of classic adventure games such as the Monkey Island series or Grim Fandango. That said, Zack & Wiki is still fairly interesting on the gameplay side of things.

One of the great things about the gameplay is the amount of uses there are for the Wiimote which makes solving puzzles a very practical experience. Most of the time you'll be turning Wiki into a bell, shaking the Wiimote to ring it so that you can turn living things into usable items or vice-versa.

Other times you'll be surprised at the number of ways you can interact with the environment using the controller such as turning switches, pulling levers, sawing trees, pouring liquids, flipping objects round and even sword fighting! Every time you pick an object up, the screen shows you how you should be holding the Wiimote and, this makes quite a difference in whether you successfully use the item or not. For example, if you had to throw a rock somewhere while timing to get it through a gap, you could find yourself missing because you didn't hold the controller correctly. As I mentioned in the intro, you go about solving puzzles in a single area, moving Zack by pointing and pressing the A button. You'll most likely find yourself dying a number of times and since you don't have the liberty to save whenever you want, some of the longer puzzles can be pretty daunting.

That is, unless you have enough coins to buy yourself "Platinum Tickets". Scattered throughout each level are a random quantity of coins that you can collect for buying such tickets so that you can undo your last mistake. Also available are "Oracle Dolls" that give you a hint whenever you're stuck. You might be thinking to yourself the game must be very easy with hints available but, the prices actually go up very high so that it discourages you from relying on them.

On the other hand, because of the small size of most of the puzzles, you can fairly easily do a lot of trial and error despite the developer's efforts to fool you such as having switches that you shouldn't press too soon. And because you won't find yourself combining or dismantling items various items before using them, the overall difficulty of the game very average even when you're at the last few levels.

After successfully beating a level, you're ranked depending on how high your Hirame-Q score is (probably the Japanese word "Hirameku" which means "flash"). The problem here is of course, the puzzles aren't really replayable since once you've beat them once, you'll know the solution already unlike in action games. Despite not lasting the 40 hours it claims on the back of the box, the game should still offer several hours of entertainment. It only took me 13 hours to beat the main storyline (I read some people managed in 8 hours!). There is more content outside the main story, allowing you to unlock secret levels and also little rhythm games where you shake the Wiimote to match a music track. However, even then I doubt it would go beyond 20 hours unless you like collecting every item there is. 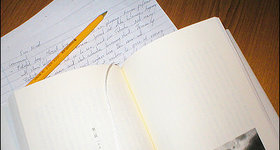 Update: You can now read the story yourself at my new fan site. Well, I've managed to...