Haruto had committed murder and decided he would commit suicide by jumping off a building one night. However, he finds himself underwater instead. When he wakes up he finds himself on an island surrounded by ruins as if the apocalypse had just occurred. Greeting him was a young cheery girl with a prosthetic arm and leg who introduces him to six other people who were in the same situation.

Everyone thought it was just a reality TV show where they were given missions to complete. It claims everyone is just a clone and can be revived as long as their X Key remains intact to keep humanity alive. With little choice, the eight new friends must find a way to survive while hoping to find out the truth. 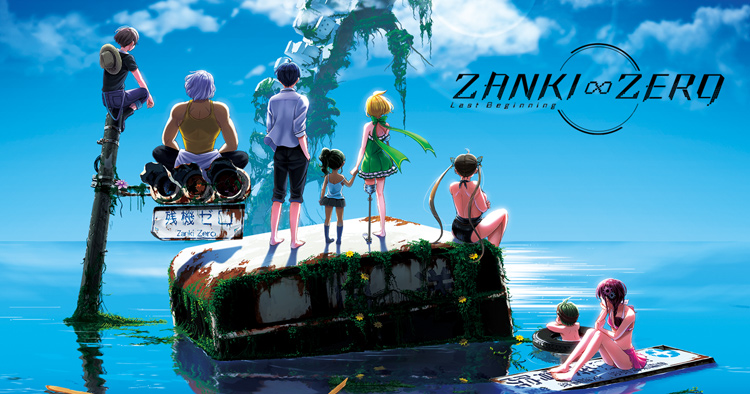 As you play on you find out how each person died and what sin they shoulder. Each chapter is dedicated to one of the characters and you take on their POV to learn about their background. It doesn't tell you the entire story, rather just short peeks as you make your way through the dungeon. 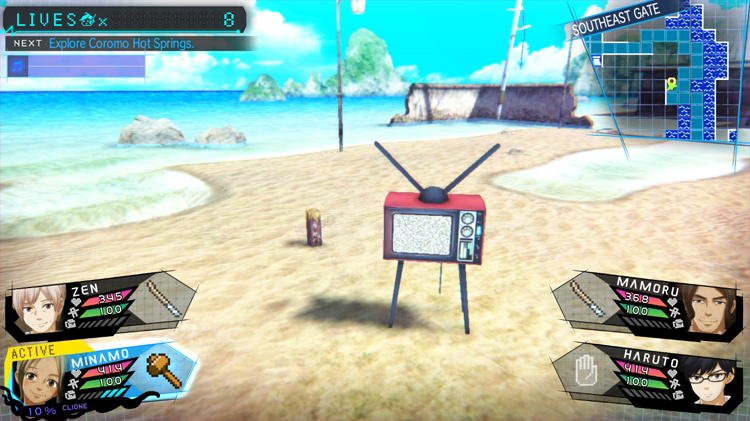 This game is pretty much an old skool dungeon crawler where it's first person and you turn 90 degrees to explore. It's annoying when you have to make your way through zig-zag paths. Or at least that's what it seems like at first... Instead of staying in one place, you can actually move around while you're in a fight to dodge attacks while charging up your own.

I think it would have been good if they did what Atlus did with their Etrian Odyssey series where they added auto-walk paths so that returning to explore areas wasn't so mundane.

The first couple of dungeons are pretty straight forward but after the second chapter you have to keep track a bit as it makes you backtrack sometimes, finding switches and using certain items as keys. 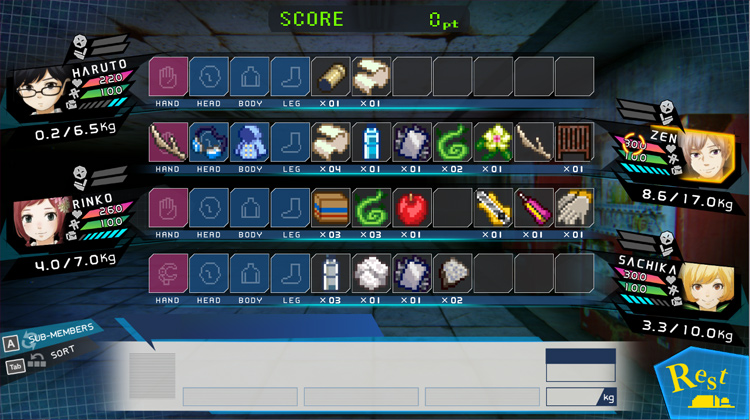 Mixed in with that is a survival game where you have to make use of whatever resources you can find. To do that, you grow your base by collecting materials while levelling up your character's skills. As with other base building games it's quite satisfying to watch your base grow from a makeshift base to a proper looking home.

Not only do you have to manage your needs such as enery levels, stress and bladder levels like The Sims, you also age depending on how far you travel or rest. Every character transitions through a 13 day life from a young kid to an elder which also affects their abilities. This kind of makes the dungeon crawling interesting because all 8 characters must be alive to unlock the door to the boss so, there's actually some party member management. You have to time their life counters so that no one's dead by the time you reach the gate.

Fortunately if you don't want to bother with all the need management, you can play on easy mode to breeze through the game and enjoy the story. On the other hand you'll still have to watch their lifespan. 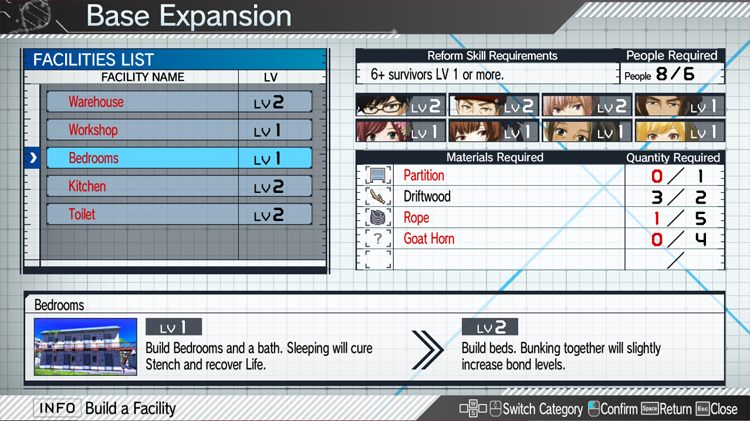 Its presentation as far as visual novels are concerned looks good but the 3D dungeons aren't great to look at. Animations are stiff. Just gets the job done. Its cheery blue skies and sea is a complete contrast to the gruesome deaths you'll end up experiencing in this game. As with Chunsoft's other titles such as AI Somnium Files, it's very adult oriented including sexual exploitation which is probably why it's 17+ in Japan (just under that 18+ huh?). There's even events in the bedrooms as you can organise the characters into pairs for each room but nothing graphic both visually or text. 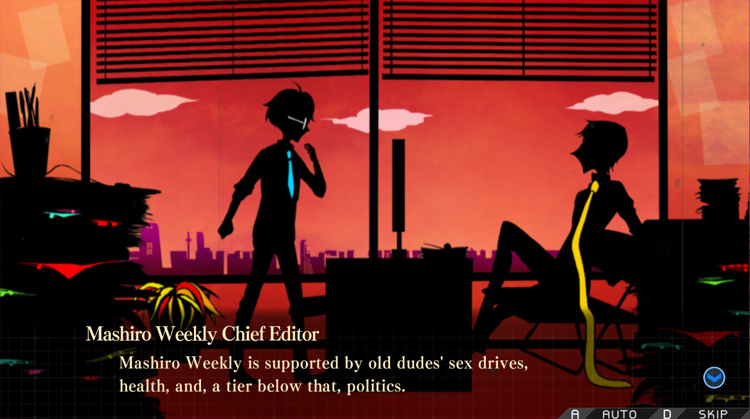 As far as controls are concerned they're not too bad. The default keys are much better than other console ports I've played. However, there aren't any options for configuring game. On the PC, it actually makes you play through the first mission before it'll grant you access to the options menu. Even then there's no resolution control and you're stuck in windowed mode. However the good old alt and enter shortcut lets you switch to full screen if you want to play it that way without any quality problems either.

I enjoyed Zanki Zero's story and hope it gets an Anime adaptation. Gameplay just not quite as engrossing despite the cross genre mix.