Wasp in the House ::

It's early summer which means it's the time you see plenty of bees and wasps busily buzzing around when you're out and about.

Usually I avoid killing insects if I can just let them out the house but over the past day, a single wasp has been flying in and out of the window and hovering around the same spot...

Curious to know if it was up to something I looked underneath the wooden shelf it was so fond of and found a strip of white stuff stuck underneath. At first, I thought it was just damaged wood but after I came back to check a few hours later, the white stuff had grown in size. 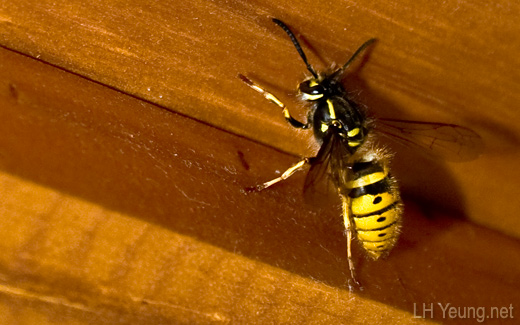 I did a little research and it turns out the wasp might have been trying to build a nest. Needless to say, I destroyed the nest foundation when I had the chance and kept the window shut but it was still persistent in coming back and began building a new nest on another spot of the shelf later. The funny thing is it built two nest foundations this time! I don't know what attracted it... Maybe the dark sheltered area underneath the shelf and all the wood it could scrape off nearby.

Here's what I learned while looking up more info about what the wasp was doing, some of which were from Wikipedia but not all...

Life of a Wasp

In early summer, the surviving wasps leave their hibernation and find a cool sheltered place to build their hive. Unlike the honey bee however, they do not have the ability to produce wax from their glands so they must make use of other material. Instead, they use their powerful jaws to chew up and gather wood fibre from anything they can such as the bark from trees and even weathering wooden fences. They then mix this wood with their saliva to build their cardboard or paper-like nest. Initially the finished nest will only be the size of a walnut but after the wasp lays its eggs inside and a colony is born, worker wasps will then help expand the nest further for more space.

Like their victims the bees, wasps can feed on nectar from flowers but they won't do so at this early stage. As the queen wasp continues to lay eggs, the workers go out to hunt other insects to bring back meatballs for the larvae. It is the larvae that produces a sweet liquid for them as food thus the grown up worker wasps do not need to find their own food yet.

However, once it's the late summer and all the larvae has been born, the wasps will have run out of food and it is then they will start hunting for other sweet drinks. Apart from nectar, they will also go after fizzy drinks and fruit too. And due to their gluttonous nature, all the sweet drink they have makes them intoxicated (yes, wasps can get drunk too!) and they become more likely to sting people. 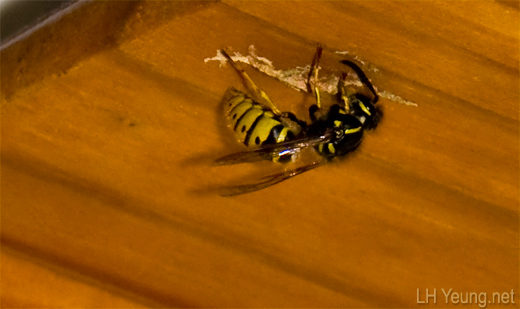 People are usually scared of wasps because they may sting but they will only do so when they feel threatened or you are standing in the way of their work path.

A wasp can sting multiple times because its stinger isn't lodged into its victim. The bigger hairy honey bees on the other hand can only sting mammals once because its barbed stinger gets stuck in its victim and when it tries to fly away, it ends up tearing off the venom sac from its abdomen and dies. That is why they are more reluctant towards stinging people.

A sting will usually only cause some pain but may also be fatal if you have an allergic reaction to the small amount of venom such as anaphylactic shock which is when you have trouble breathing and low blood pressure. If you are stung by the honey bee, it's best to scrape or pull the stinger out as soon as possible because the venom sac still attached to the stinger can continue injecting into you for up to 10 minutes which as mentioned above can be fatal if you are allergic. Afterwards, clean the area with some disinfectant and cool it with an ice bag. 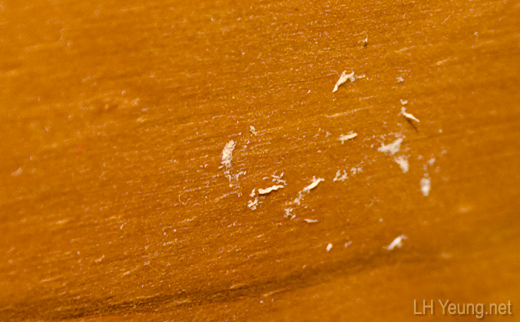 If you plan on killing a wasp you might want to be careful there aren't other wasps nearby because when you kill or injure one, it releases a chemical known as "alarm pheromone" which alerts the others to attack anything within range. Bees can react the same way.

There are many other alternative options, one of which is to use some water mixed with washing up liquid or soap as a simple repellent on surfaces. The soap can melt away the protective wax coating wasps have on their body and wings and, if the soap gets inside their respiratory system, they can suffocate and die so they will most likely stay away.

They will die almost instantly if you spray the soapy water on them and this works on other insects that have a similar wax coating on them such as ladybirds that enjoy eating away vegetables.

I also read that when outside, deodorants can also act as a repellent but perfumes will attract wasps because of the sweet smell.

So, the next time you need to deal with wasps just have some liquid soap and water ready for a quick sure kill or spray on surfaces you want to repel them from. It worked for me. 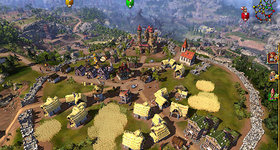 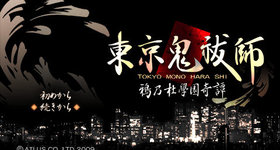 17 Aug 2012, 8:25:45 am
Very good infomation. I got a bite from a paper wasps while painting the house. The bit stung but went away in a few minutes and no swelling or red spot. A couple days later the bite on my hand swelled up, got red and itchy. Now it's been five days the swelling has gone down but the bite area is red with bright red spots, itchy and has grown to about 1 1/2 inches in size. Now I'm just keeping an eye on it and keeping it clean.