Episode 24
A Song of Grief

The war at the borders of Ryoza continue and although the Grand Duke's army lead by Shunan continues to be victorious, their losses were not small. Many soldiers and Toudahs too were sacrificed. As Damiya sends flowers to the deceased to "purify" them, a grieving soldier runs to the cart and scatters th petals over his dead comrades. The divide between the "Horons" and "Wajaks" grow greater. The two brothers remember their promise when they planted the tree - that they will fight together on the battlefield to protect their country but Shunan was thinking differently now. He suggests they find other ways of protecting the country and keeping the people united. Nugan is unhappy that his father won't send him to fight and also that his brother disagrees that they should follow their ancestor "Yaman Hasal's" way, using force to bring peace. He decides they will go by their separate beliefs from now on.

Nukku and Mokku are helping out at Kazalm and are making more work for Karisa the dorm mother than helping her. She was considering firing them because they couldn't even carry out half the work of a single man but, she decides to give them another chance and asks them to go shopping for her. They leave for town, determined not to disappoint her but ends up losing the bag filled with five pieces of gold. Just as they were just about to give up hope, Mokku remembered how they had met Erin and had promised they'll never be thieves again. And so they go in search of ways to earn the money back so that they can return to Erin's side.

Erin is so caught up looking after Lilan, her school results are starting to drop and if they don't improve by the summer exam, she will have to leave the school and that means leaving Lilan too. On the other hand, if a large sum of money could be paid, she could also be given another chance but of course, Erin couldn't possibly ask John for that kind of money. She decides to concentrate on her studies but has a hard time finding a quiet place to study because in the stable, Lilan doesn't understand her words and in her room, Yuyan was recovering from a "heartbreak". However, she soon discovers that she wasn't the only one struggling and studying together, they all manage to pass. With the summer exams over, everyone leaves for their break but Erin decides to stay at the conservatory with Lilan. As the days pass, she finds out Lilan now understood her words and wanted to teach her more but at the same time, she was worried he wouldn't be able to get along with other King Beasts in the wild. She decides to discuss the matter with Ethal and is sad to learn Lilan will never be released again. Sitting together with Lilan out on the grassy fields, Erin felt uneasy as she gazes at the summer skies.

Episode 27
The Fall into Hikara

For the past few nights, Erin has been having the same dream. In the dream, she would see her mother but when she tries to reach out for her, she would be blocked off by the fog. The lack of sleep soon affects Erin and Ethal starts to worry about her. One night, she overhears Karisa talking to Nukku and Mokku about a strange light in the forest that would take away people - Especially the bad. Erin remembers seeing something similar in her dreams too and decides to go investigate when she sees the light from the window herself at night. However, she finds nothing and wakes up in her own bed again. Still bothered by her dreams, she decides to visit again during the day and finds many King Beast statues built much like the Toudahs in Ake Village. That night, after falling asleep next to Lilan, Erin dreams of the fog again but this time hear voices that her mother must be sent away to "Hikara" because she had committed a grave sin. Erin was about to give up when the fog got in her way again but John appears and gives her a lift. After reaching the boat Soyon was on and saying farewell to John, calling him "father", Erin tries to find her mother. It was then that she learns the fog represented how she was caught up in sadness and hesitation.

I think Nukku and Mokku are supposed to be this show's comic relief but I don't find them funny at all. I guess they're the children's part of the show.

At this point, it looks as if the Grand Duke's sons themselves are divided as a Wajak and Horon now - Shunan being the Horon and Nugan being the Wajak. I have suspicions Damiya was partly responsible for the attempted assassination and everything that's happened so far and this will be to his advantage as he'll probably continue trying to get close to Nugan to manipulate him. Fortunately, the princess Semiya is in love with Shunan or everything would be on Damiya's side.

On the other hand, it looks like the love interest is starting to build up in the show but I think it's obvious Erin will end up with Iyar in the end. Tomura's got some competition to stand up against or maybe he'll end up dead trying to protect Erin at some point of the show... That's usually what happens with love rivals in shows, no?

It kind of felt like Erin was going to run away with Lilan from her expression at the end of episode 26. We haven't heard anything from the People of the Fog for a while now or seen any signs of Nason who's supposed to be keeping watch over her. Now that she can control these King Beasts who supposedly had a great role in bringing peace to the world, I think it should be about time we find out more about their secret soon.

Episode 27 was quite a change of atmosphere. For a moment, I thought it was trying to pull an Evangelion because it felt like Erin was stuck in a loop at the start cued with a bundle of philosophical questions! Never thought she would see John one last time in her dream... I thought it was perhaps just the image of him inside her consciousness that was helping her but then the preview reveals it isn't so. Such a shame. Wonder what age he was?

Well, aside from that, every time I see the script used in the world of KnSE I'm still reminded of Korean Hangul. I still wonder if the author herself went as far as JRR Tolkien (Lord of the Rings) in inventing a new language for her stories as well as drawing maps of the world although, I never found any in the hardback novels. 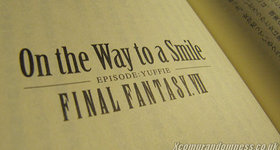 In "Case of Yuffie", Yuffie makes her way back to Wutai after separating with the... 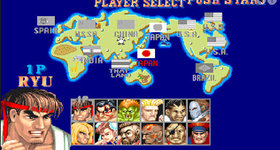 19 Jul 2009, 4:19:28 pm
Reminds me of Korean too! Though, only when it has the circles. If you look carefully at Erin's test paper you'll notice a lot of letters (hiragana/hangul/taiwan's letters/whatever other asian language letters) and words that look like chinese characters/simplified characters just all written with a boxy font. I doubt she invented a new language.. it looks more like a lot of the characters are repeated over and over in a random way.