Decided to pick up a new pair of earphones for myself because I'm currently only using the pair that came with the Meizu Mini Player and they have no bass. They were beginning to nag after getting a pair of better headphones and speakers.

After browsing around, I thought I'd spend a little more on a pair of quality earphones. Well... At least hoped they're quality! I ended up choosing a pair of  Sony MDR-EX500LP earphones because I liked the quality of their MDR-V300 headphones. And no, I didn't pay the full RRP for these.

The specifications for the earphones are... 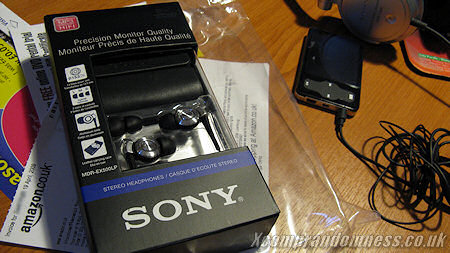 And using the specs once again as a rough guideline, they're...

So, looks good on paper so far.

Inside the box, there are three silicon rubber buds of different sizes in case the pre-attached ones don't fit into your ear snugly enough. 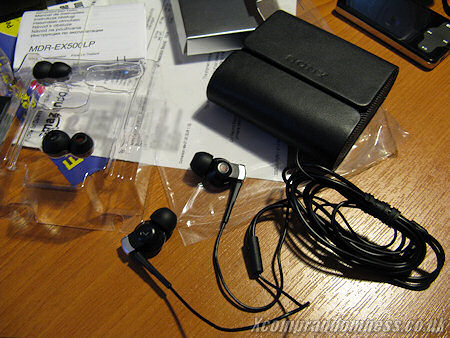 There is also a genuine leather carrying case. 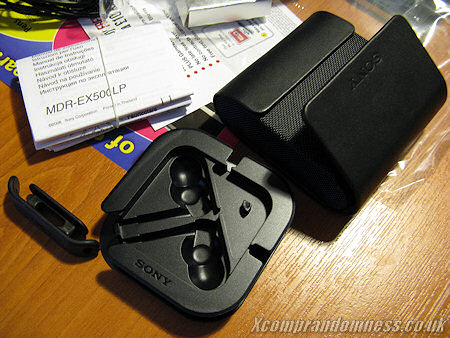 Inside it is a square plastic tray for making sure the earphones are held safely in place. 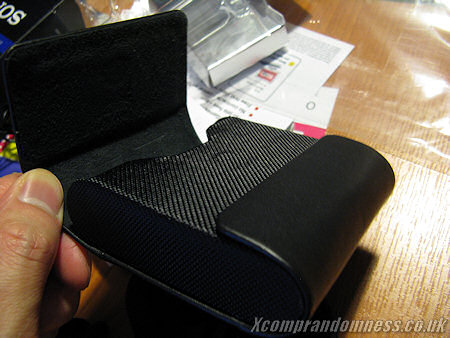 It feels very sturdy and the top is held shut by a magnet. 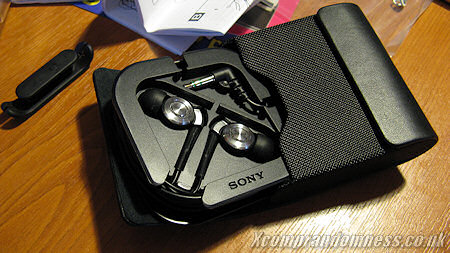 I'm sure part of the expensive price was probably for this case... As if I'm going to want another thing to carry around with me and spend time unplugging my earphones then put them neatly away while on the move. Still, I guess it's good to have something good to store them in when not in use for some long periods of time.

Unfortunately, the earphones don't come with a wired volume control. It does have this plastic holder that you can wind up the wire in if you find it too long but at 1.2 metres, I doubt you will. 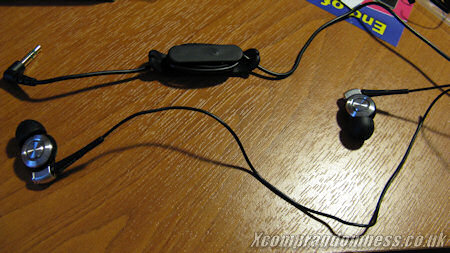 And of course, the earphones themselves with the clearly visible 13.5mm drivers which is responsible for reproducing the sounds in your ears. Most earphones only have half the size at 6.5mm so this should be one of the factors contributing to better sound quality.

These marked sides go against your ear lob. 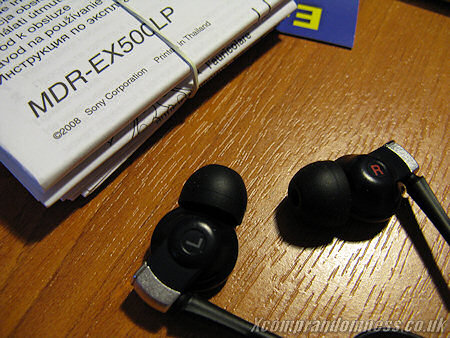 The silver aluminium sides facing out. 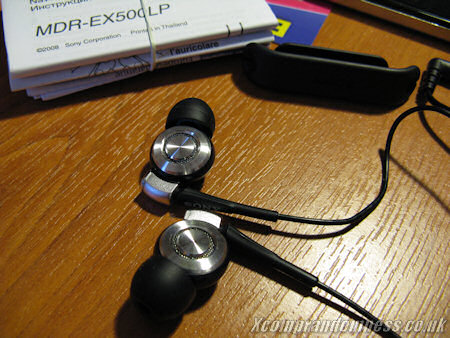 Upon my first use listening to lossless music, I immediately noticed the bass thumping in my ears but the overall sound spectrum itself felt unbalanced because the singer sounded as if he/she has decided to take a back seat in the room and just sing from there - without a mic! The vocals were so weak and were fairly much muffled out by the instruments.

However, after letting the earphones "burn-in" i.e. letting them play for a good couple of hours so that the newly manufactured components are loosened up, the overall sound was better and the vocals were distinguishable again. I had them playing out of my ears at moderate volume, less than 25% of my DAP's volume for about 3 hours before I put them back in and started hearing a difference - A big difference! Everything sounded so much more vibrant and crisp. Even the bass was thumping with more oomph. I notice with these earphones, backing vocals are a lot more pronounced making them very distinct from the main vocalist but not enough to overtake him/her. There's a lot of volume to instruments quite close to as if you were listening to them in a room.

Funny I didn't need to do any burn-in with the MDR-V300 headphones. I'm guessing it's because of the multi-layered diaphragms were being loosened up in the drivers here.

They both make use of neodymium magnets which are becoming increasingly common with sound equipment due to their sensitivity to sound but, I think I may probably go as far as saying these earphones sound better than the headphones. Although I'm sure audiophiles will say "never go with frequency response" ratings but in this case, the ratings seems spot on. These earphones cost a bit more but also offers a wider sound range, covering well beyond the human hearing range for feeling the sounds you can't hear as if you're in a live concert. I guess in this case, you really do get what you pay for.

The only "downside" is these style of earphones are like earplugs so you'll almost hear no outside noise at all while you're listening to music. In fact... They can be pretty effective earplugs even if you aren't listening to music. On the bus they manage to block out all voices and muffle the loud engine. As long as you don't mind listening to your own breathing, it shouldn't matter much though. The sound remains as crisp and full of volume as if you were listening in a quiet room. 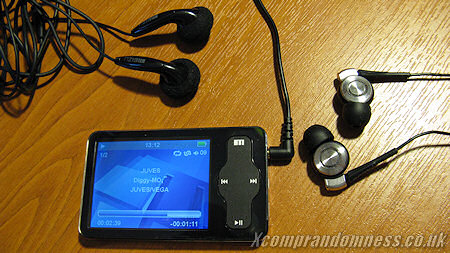 Overall, a satisfying pair of earphones. Just make sure if you ever get these or any other kind of earphones/headphones and they sound really bad, give them a good burn-in first before returning them. 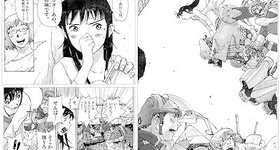 As Anime fans may already know, most shows are adapted from Manga and differs quite a... 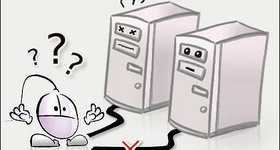 My blog's going to have some downtime again only this time, it has nothing to do with...

11 Jun 2013, 3:33:33 am
I been listen to this headphone for couple of month, the sound quality change gradually, since I am the music listener, jazz, blue, orchestra, new age, sentimental, electro jazz, fusion jazz, the sound was awesome and natural, the precision sound production for most instruments. I listen to it with foobar2000 with SPL Twin Tube Processor, Voxengo Harmonic EQ, Resampler, JB Isone Pro and SRS audio essential, they produce the sound of near to hifi.

Have been pondering on what to look at compared to my Ultimate Ears Metro-Fi 220's. Love the sound but they're not the most comfortable in-ear's I've had.

These Sony ones sound just the ticket and I did love the sound of my previous EX71'S.

6 Dec 2009, 7:07:13 pm
thanks mate this helped greatly it was between these and the jays s-jays "jays" being the make and "s-jays" being the model type i wanted it for bass and clear sound more than anything and since im in high school and have to get a school bus full of just little annoying schoolchildren the noise isolation thing will help lots ta :)

22 Aug 2009, 11:03:09 pm
It was as far as I was willing to stretch too. The cheaper priced earphones just didn't cover as wide a frequency response range or had average sized drivers.

I do wonder what the earphones in the £100 range that have separate tweeter and woofers built in sound like though.

I have since reading your review made up my mind and stepped up from the Sony MDR-EX71 earphones.
These have a much better fit. The EX71s used to hurt my ears a little and I would have to ride out this ache and continually shove them in or adjust them.
The fit of the EX500LPs alone are worth it and once shoved down one's ear canal, very little outside noise can be heard. One has to be careful crossing roads wearing these!

I am using them with a Cowon iAudio S9 32Gb player so the lows are absolutely massive and now that I've got the EQ just how I want it and the EX500LPs just starting to burn in, they are coming into their own. Music wise I go from Hip-Hop to Reggae, Jazz, Funk and Soul to Rock and World Music so I demand evil low bass at times but also some refinement so I can appreciate some Coltrane.

They are not as loud as I would have liked so I am driving my iAudio S9 a bit louder averaging it at 75% right now. Well you know how it goes on London's noisy streets. You need to pump it sometimes. As Xcomp said, they are good for blocking out the general noise of buses when someone decides to share their mobile phone conversation with you or the kids at the back decide to use their mobile phone speakers to play garage and grime music (why don't they get some earphones and start appreciating the music?)

To conclude, it's well worth considering and at around £50 it is a stretch but not that much compared to what you get.

14 Aug 2009, 3:54:18 pm
Top notch review mate. I was about to return them until i read about the burn- in method from your review. Much appreciated