I've returned the Logitech X-540 speakers now and decided to go for Creative's Inspire T6100 which also has many good reviews. I originally wanted to go for the slightly more expensive newer model, the Inspire T6200 just for the wired remote but I couldn't find any reviews about them. They also use dual cone drivers for the satellite speakers which are commonly used in cars to produce the full range of sounds with one driver so, I decided to avoid them. Separate drivers for different range of sounds are better if you want good sound quality.

I will be making comparisons between these and the X-540 speakers since I already tried them out. 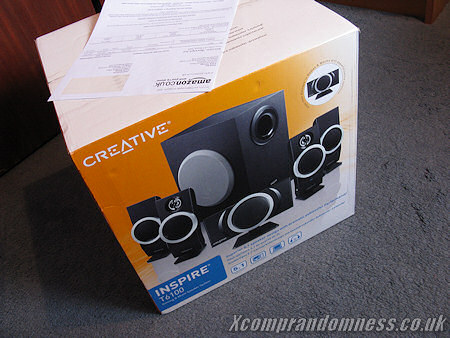 First off, the box is lighter weighing at 9kg instead of 10kg.

Right upon opening the box, you're greeted with advertisement for Creative's other products which Logitech doesn't do. Had the Creative Zen V Plus once but, decided to sell it because lines kept appearing on the QLED display screen despite getting a replacement. It was also cumbersome partitioning the space before I could use it like a drive too. 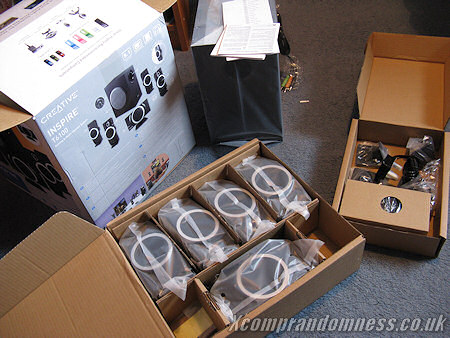 The wooden subwoofer with no wired remote. It feels lighter than the X-540's which is probably why the overall box was lighter. Notice the cone is protected and "blasts" out from the side instead of the bottom. 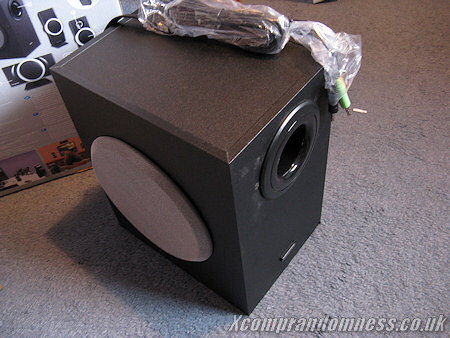 So without a remote, you have to adjust the bass from the back now. 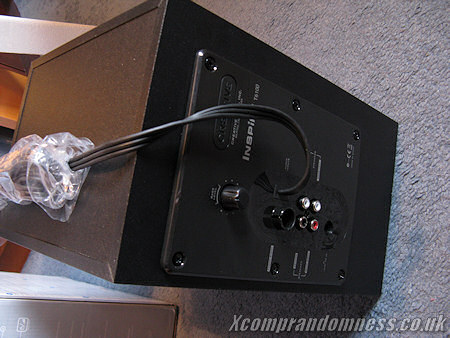 Also, none of the speaker cables are colour-coded unlike the X-540's so you just might have to refer to the quick start guide before plugging the satellites in. 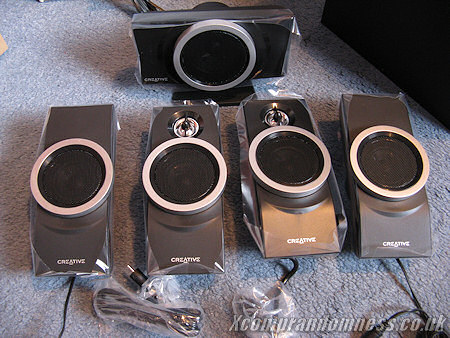 They even included some stickers to help discern which speaker is which.

The adaptor is a big heavy thing compared to just the main plug the X-540 had. I guess this is where the weight from the subwoofer went. The big heavy transformer is actually situated two thirds of the way across the wire which makes it a bit awkward to setup because you have to decide where to put it. It doesn't help that the subwoofer audio cable is fairly short and can't be detached. 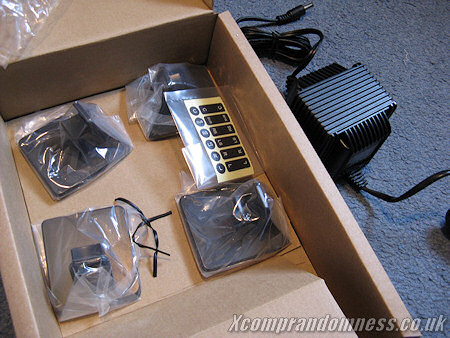 Stands are detached from the satellite speakers. 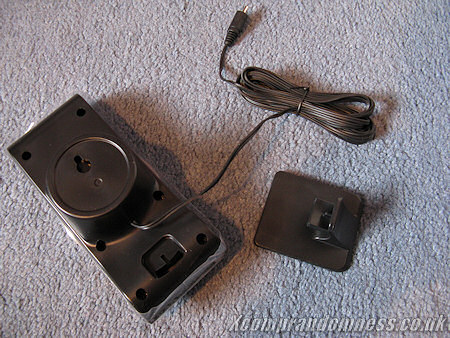 They simply clip on at the back. 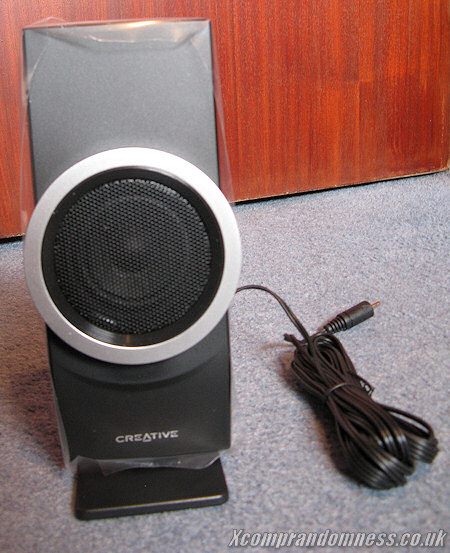 Here are the front satellite speakers. Notice they have an extra circular "plate" at the top and it's not just there for decoration but more on them later.

Some reviewers were complaining about the bright blue power LED. It's definitely brighter than the green LED on my old speakers. It can light up a corner of my room like my mobile phone whereas the old speaker would just glow faintly in the dark. It doesn't really bother me when the lights are on though. 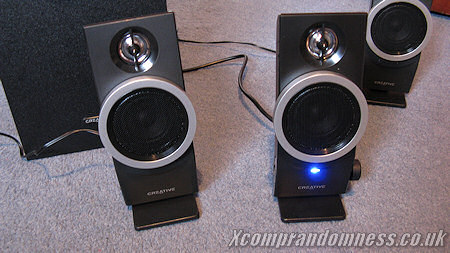 The front right satellite is where the headphone jack and power switch is. 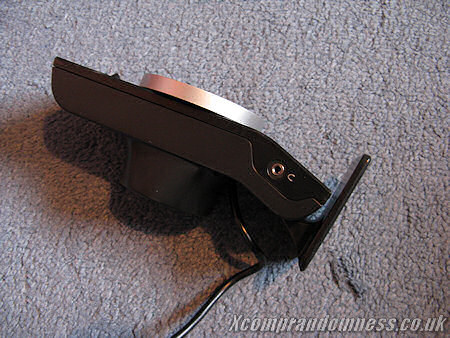 The volume control works with any headphones/earphones plugged in too. 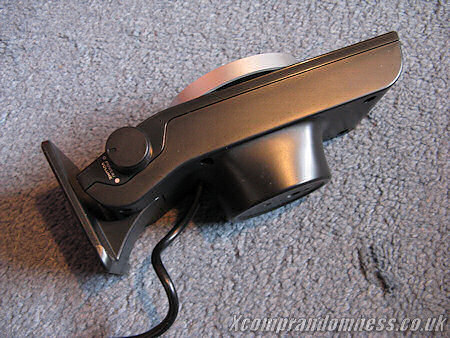 Its cable is very different from the other satellites. I read some people had problems turning on the speakers because this wasn't pushed in all the way into the subwoofer.

Some even went as far as suggesting "hammering" it in but, you shouldn't really need to if you have the grooves positioned right. Just give it a little push so that you can feel the pins sliding in. 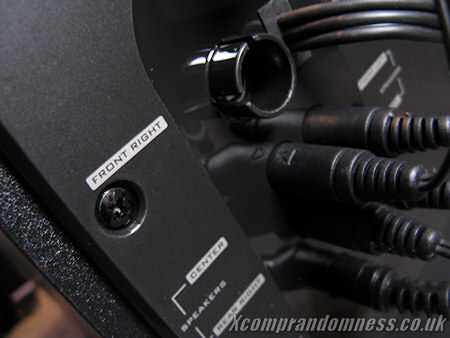 The rear satellites have 4m cables as is the norm while the front are 1.7m and the centre 2m. If they're too short, you can always go for a phono extension cable.

Just like the X-540, the first thing I wanted to test was the surround sound. Using the same 5.1 surround sound movies ( i.e. FFVII Advent Children, Lord of the Rings, Evangelion 1.01), the effect was fairly much just as good.

However, the rear satellites are barely audible at times if you don't have the volume up or have them close behind you. I had to use the "Noisy Environment" setting in Cyberlink's PowerDVD to help amplify the sounds at times. Perhaps this was a trade-off for the components used in the front satellites. People with the recommended Sound Blaster Xi-Fi card don't seem to have this problem but, the buyer shouldn't really be expected to buy the latest soundcard for a good experience.

On the other hand, the rear satellites seem to work just fine with games. I even heard a bullet whizzing pass in Mirror's Edge and then hitting the walls behind me. Both the X-540 and T6100 does fine in this department.

At first, instruments only sounded slightly better but then I realised I still had my sound card configured for a 2.0 speaker set up. After changing the setting to 5.1, the sounds were richer and had a touch of the ambience I had been looking for. This is most likely down to using separate drivers for the mid-range and high frequency sounds. The 1" tweeters visible at the top of the front satellites responsible for the high frequency treble sounds that the X-540 were missing seems to make quite a bit of difference as if a more experienced band is playing the instruments. Not top musicians but better than than the half-hearted sounds coming from the X-540. The Sony MDR-V300 headphones still has the edge but instruments and vocals have a better, cleaner rounded off sound now.

Perhaps a good analogy would be carry a proper camera with you instead of depending on your camera phone if you want good pictures. The all-in-one devices can do lots of things but never as good as a dedicated device and in the case of speakers, it's separate drivers for different kinds of sounds.

Now I can agree with the experts that the frequency response rating doesn't really mean much if the chosen components are bad.

However, do bear in mind the mid-range drivers for satellite speakers are still pretty small if you really want to hear those vocals, it's worth sticking to a decent pair of stereo 2.0 speakers instead. Not to mention you're only paying less than £10 per speaker here.

Next, we have the wooden subwoofer for the low bass frequencies and it seems to be as powerful as the X-540 with little or no distortion too. Perhaps a little overpowering in fact. A tiny little twitch is enough to shake the floor but it doesn't feel as effective with the sound coming out from the side. The overpowering bass gets worse once you have the volume up when sudden explosions will probably make you jump off your chair and dive for the volume switch! Even at the minimum setting, the bass is very strong and it's slightly frustrating it can't be lowered further.

Fortunately if you find the bass in music too overpowering, you can always load up the equalizer in your software such as Winamp then drag down the sliders around the range of 20 - 150Hz.

By purchasing the Creative Inspire T6100, I've had to trade off the handy wired remote the Logitech X-540 kit had but I think it's fair enough. Sound quality over features for me and at at this price range, there just has to be a trade-off. 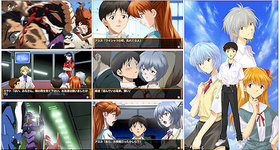 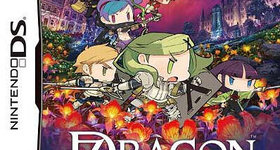 7 Oct 2009, 8:14:00 pm
I just bought these speakers from the older creative model and wow they are great... I have a x-fi extreme gamer sounds card and together there are enough ways to adjust the quality for both music and gaming.
I DO HATE the fact that there is no wired volume control, this is just plain Stupid and whoever decided to do that should be demoted.

I was seconds away from buying the logitech or even the better creative set but both had just the ugliest speakers.. At least these look modern and sounds great or more updated...

Is there anyway to use the headphone jack for a volume control wired or bought this way.. HELP... i miss my remote...
thanks