Ryunosuke Kataoka was visiting his father Nanpuu at the hospital. They were watching a news report about how the GGP were currently discussing plans to counteract the BMA's terrorist attacks. 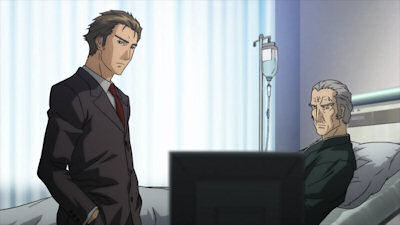 All was going according to the GGP's plans and Ryunosuke didn't seem to happy that the attacks will give them an excuse to bring in Ridebacks to fight fire with fire. Nanpuu smiles. It was ironic that his daughter was riding one no matter how much the family opposed against the idea. She was just like her brother. 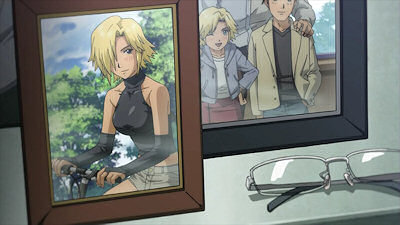 Meanwhile back at the academy, Uchida was once again amazed at Rin's talent. She describes her leap into the sky was if she was on the back of a pegasus. Rin plays it down and answers it was just a reflex action while she was panicking. They are interrupted when the man at the Rideback Club approaches them. He apologises for what happened and introduces himself as Hishida, a second year mechanics student. His friend Kawai was with him who lays an application form before her. She is invited to drop by again even if just to watch. At this, Shouko gets angry again scolding them for letting her friend get on such a dangerous vehicle yet, still having the guts to ask her to join their club. 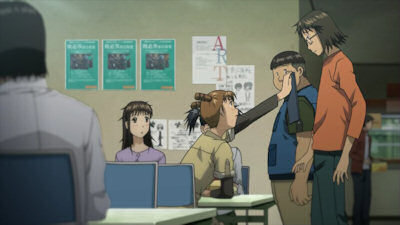 At another part of the campus, Tenshiro Okakura gets a call from the blonde haired girl Tamayo Kataoka. She was pretty sure Okakura knew Rin had talent and was sending him some data regarding her background which tells of how she started learning ballet since she was three and has been winning various awards. Okakura shuts the blinds when teased that he knows nothing about art anyway.

Rin drops by the shed again and finds a different Rideback there, the RB-Z. To her surprise, Kataoka suddenly approaches her and challenges her to a race. If Rin wins, she will be allowed to take a ride on the Rideback whenever she wanted but if Kataoka wins, Rin will have to be her servant. The time will be on Saturday at ten in the morning. Fuego will be repaired for her by then and she will even give her a handicap. Before Rin could say anything, Kataoka speeds off. 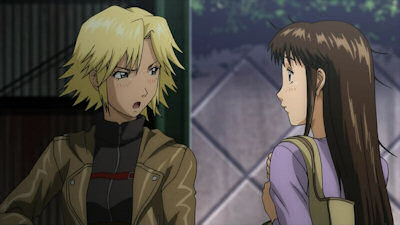 On the way home Rin tells her friends what happened at the station. Uchida seems to know quite a bit about Kataoka. She was the head of the Rideback Club and was studying third year French. She was probably jealous of Rin because of that beautiful jump into the air. Whatever the reason, they'll be backing her all the way.

While out alone getting the washing done, Rin calls her younger brother Kenji to ask more about Rideback pretending her friends wanted to know more about it. He agrees to tell her more if he can get Kataoka's autograph. She learns that Kataoka had won in the National Rideback Race last year. Returning home, she decides to learn more about Ridebacks on the internet while Shouko was in the shower. She closes the laptop when Shouko comes out and denies she had any interest in going to the race. However, Shouko smiles knowingly. She already knew what her friend was thinking. 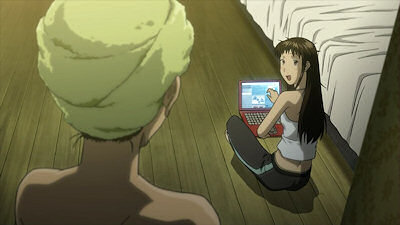 Soon it was Saturday. Kataoka was already waiting while Kawai was setting up the checkpoints. They were sure Rin was going to come. Even Uchida was all ready to cheer her on. They weren't disappointed. Rin soon arrives and is given one of Kataoka's suits to wear. Hishida lets her know they've checked everything but just in case, there's an emergency stop button on the EW watch.

The race was to the old water tower and back. Rin was to finish three laps before Kataoka finishes the fourth. The first two laps will be a practice run to let Rin familiarise herself with the track. Even though it was a practice run, both Hishida and Kawai were surprised at how Rin could keep up with Kataoka's speed. 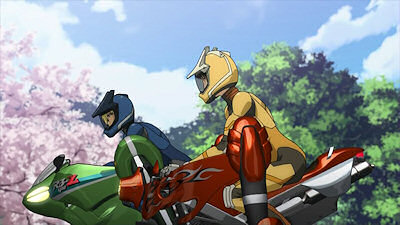 Along the way, Kataoka tries to provoke Rin letting her know they were both the same - the kind of people that doesn't back down from a challenge. Rin denies it and says she just wanted to know how good national champion Rideback racer was. She doesn't say it out loud but, she also wanted to experience the heart throbbing moment she had when she jumped into the air on the Rideback.

Katakoka ends up treating her words as a challenge and decides to increase the handicap, allowing Rin to win if she finishes two laps first instead of three. The race begins immediately even though the warm up was supposed to be two laps. They are interrupted when they find the gates closed because some construction material was being moved. They'll just have to wait for another five minutes so they decide to take a shortcut through a building. Being able to make your own route was one of the joys of driving a Rideback. 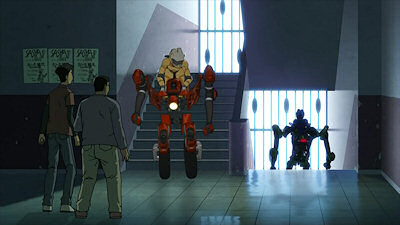 While they were making their way back to the club to restart, Uchida asks how hard it was to control the Rideback. Hishida explains it was easy. All you had to do was keep balance and auto-mode will take over. However, both Rin and Kataoka were both using manual mode just now which takes a lot of energy even for a physically fit person. Hearing this, Uchida was even more confident Rin had performed a Grand Jeté in the air which is a ballet technique. She had talent.

Arriving back at the club, Uchida signals them to start the race. Kataoka speeds on ahead and Rin notices her Rideback changing forms. She had seen it before on the net and remembers the instructions how to use it too. As Hishida watches, he explains it was the "Spread Leg Form (SLF)", stretching the legs outwards around the back and front. This lowers the gravity and wind resistance but makes navigating corners harder. 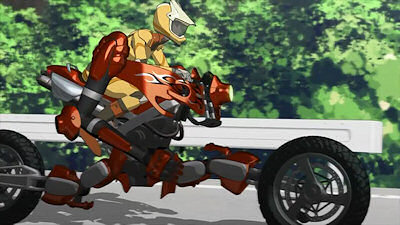 To their surprise once again, Rin was catching up with Kataoka but some unexpected manuvering catches Rin off guard. Kataoka manages to trick her into speeding up during a winding part of the road causing her to lose control and slip into the water. It was as Kataoka predicted. Rin was like a wolf among the sheep. 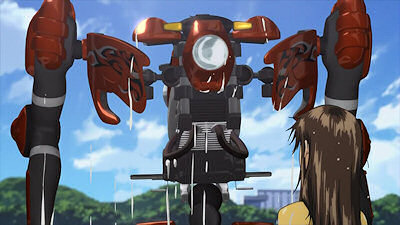 Hishida was going to help Rin recover Fuego but he finds out there was no need. Rin had recovered and was already waiting for Kataoka to resume the race. The race was on and it was neck and neck between the two racers. They reach a tight right angle corner but to Kataoka's surprise, Rin takes a leap through the air, shifting forms and completes the turn flawlessly. 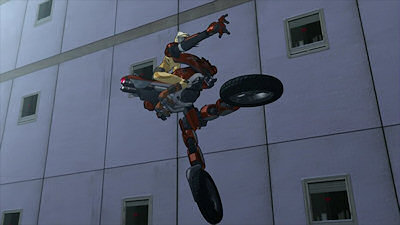 Unfortunately for Kataoka, she was so surprised she crashes her RB-Z while trying to avoid a cat. Waking up at the hospital with minor shock to the head, Kataoka asks Kawai to let Rin apply for the next national race. She wanted to settle it in an official race and from tomorrow onwards, she will be training Rin. 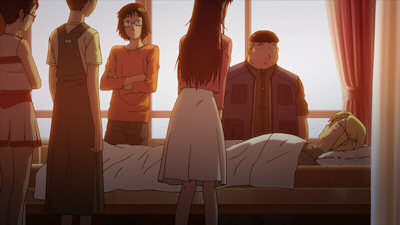 Sitting down on an embankment with Shouko next to her, Rin wonders if she was doing the right thing. Shouko assures her it will be fine. She looked great on a Rideback and it made Uchida join the club too. Rin looks up at the sky and smiles. 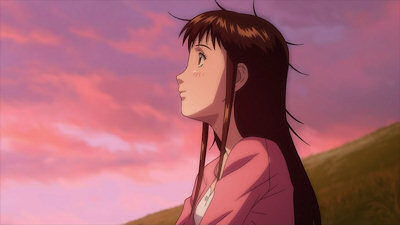 Took a lot of screenshots this episode. I like the sign Kataoka put up on the fridge - "I'll kill anyone who drinks without permission!" Sort of reminds me of C.C. from Code Geass when she put that "beard face" up but, Kataoka's not quite as witty. Is she going to end up being the tsundere girl of the show? 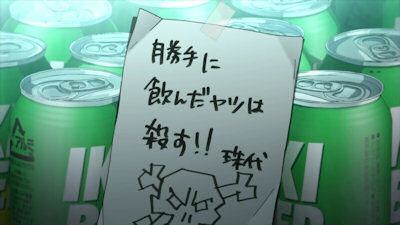 Having a better view of the Ridebacks in action this time, it reminds me of rollerskating. Can't say much about this episode except that now I'm learning a bit more about ballet and that Rin is a prodigy. A typical setup but, mecha and ballet will surely make an impression on viewers new to the show. The whole sci-fi bike racing idea is a good break from the norm than say, watching Initial D although I'm sure it gets more complex than that later once this BMA resistance force shows up. I guess at least we know a teensy weensy little bit more about what the GGP are doing and a little more character development.

I still think they're overdoing it with the lighting and cherry blossoms. 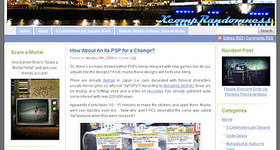 You'll probably have noticed I've moved and changed a few things on the blog today... 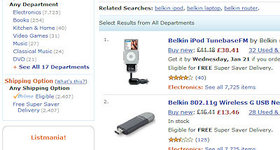 According to PC Pro, Belkin has admitted paying people US$0.65 to write positive...

24 Jan 2009, 2:00:20 am
Didn't know that the Ridebacks can change modes... though it would be related on how they shift their balance around with just two wheels.

The part about "making your own route" reminds me of parkour, since the only limits to you would be your ability to travel on uneven surfaces and the area itself.

The show seems to be going at a good pace. Training next, huh...