A Bit of Clearing Out

I'm kind of running out of room to store the new stuff I buy so I decided to do a bit of clearing out. There's so much stuff I won't be using again in the future again. Just clogging up my room. As the saying goes - "If the old doesn't go, the new doesn't come."

Look at all these cover discs I've accumulated from magazines over the years! 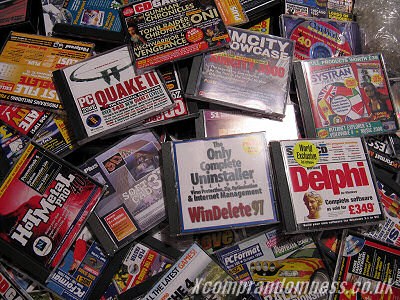 At the time, I couldn't really afford any games or software so what I did was just rely on the freebies computer and gaming magazines had on their cover discs. They're pretty much all useless to me now because they're too old.

Being able to work now, I can afford them but I still don't really buy any productive software because I don't need to. There's such a great increase in legitimately free software these days or if you really need to, students get some big discounts.

Saves trawling sites for key generators and hoping the downloads haven't been modified in some malicious way. 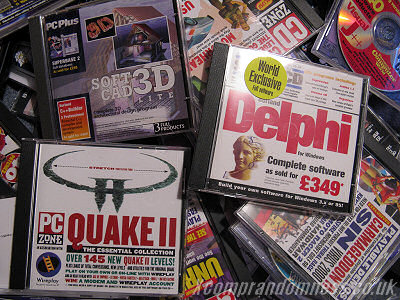 I did manage to save up my pocket money to buy some full games like Quake II and a few others. Check the size of the packaging back then!

All in slim compact DVD cases now but, I think Japanese PC dating sims still come in big boxes like this judging from the Otaku blogs I usually read. Probably because of all the pre-order goodies they come with.

Really not sure what to do with all these old PC games because they probably won't be even worth £5 now. 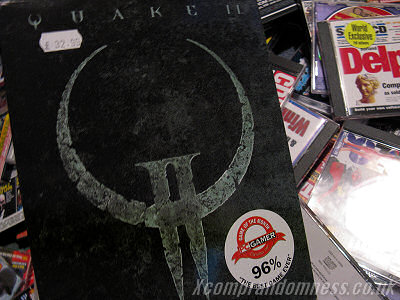 The requirements at the time. Only played this using the software renderer because I didn't have a 3D graphics card. Now you can play it on your DS if you have a homebrew card. 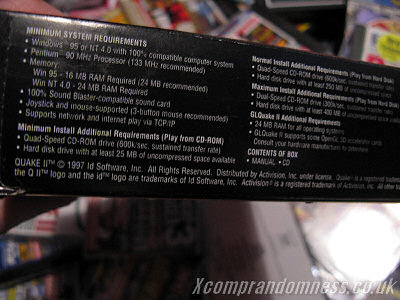 What hasn't changed is the contents of the box. 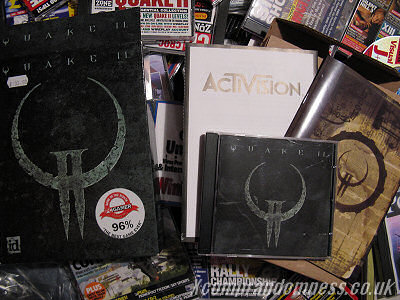 I'm sure a lot of people who like FPS will remember the "gibbing" from Quake deathmatch. I think Quake II was the first FPS that gave enemies weak spots. For the Enforcers, one had to aim at their head to take them out quickly. Then they would give one last dying spray of bullets with their chain gun before falling to the floor. 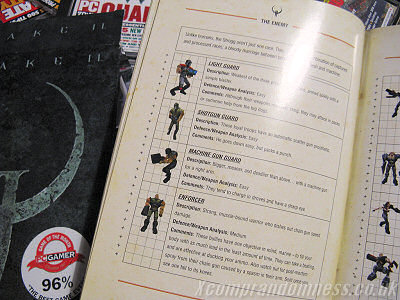 Also used to buy these bootleg Anime VCDs and DVDs due to the low cost. A dial-up 56k pay-per-minute connection at the time wasn't exactly going to let me download much so it was the only way I could watch Anime. Didn't know Japanese at the time so I always tried to find dubbed versions which made it even harder to obtain.

Won't find many of the the stores that sell these anymore thanks to cheap broadband. I remember the last time I tried to find these stores just to see how they were doing, there was only one around hidden away. There was a number of people secretly guiding potential customers there...

If these were legitimate, I would probably just sell them. Since I don't have the complete set of Inu Yasha and the Initial D discs are corrupted, they're hardly worth keeping. Might just pick up the real boxset sometime but, don't really feel like re-watching either show.

The Evangelion set on the other hand, I'm keeping. Can't wait to watch the second remake movie! 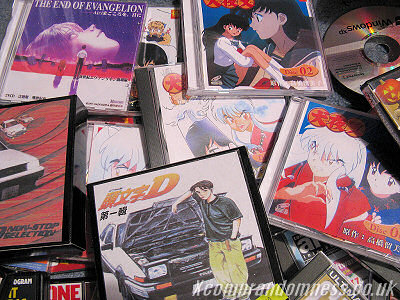 So what else do I have to get rid of... Ah yes, the Newtype magazines I used to buy because I really like the artwork in Anime and wanted to draw like that. Needless to say, I still do enjoy the artwork in animation and games such as in Makoto Shinkai's "5 Centimetres per Second" but having lost the interest to hone my art skills, I might consider throwing these out too. 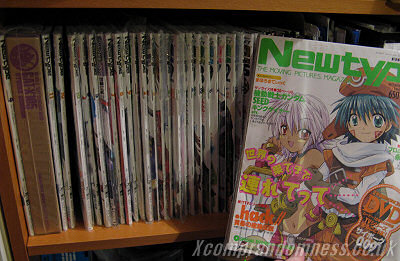 These old computer mags where I picked up coding from during high school go in the trash together with the cover discs. Funny how they advertised 56k modems back then but these days they don't. You just wait to get something from your broadband ISP instead. 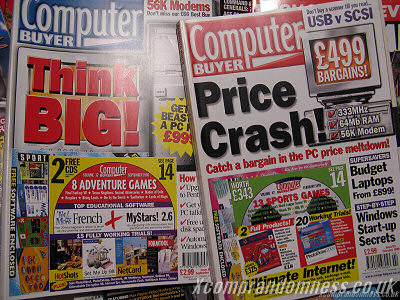 Then there's also all these books that I bought during the courses I took at uni and pretty much never used. Big mistake buying books in the reading list they give out. You'll most likely won't need them! Well, just one or two. Will have to find a place to get rid of them too.

Not going to need the Japanese cassette course anymore either obviously. I only used the book which was supposed to be a three month course but, my passion for Japan at the time allowed me to finish and familiarise myself with it within a week. You can learn about how I learned the language on my About page since I get asked that question a lot. 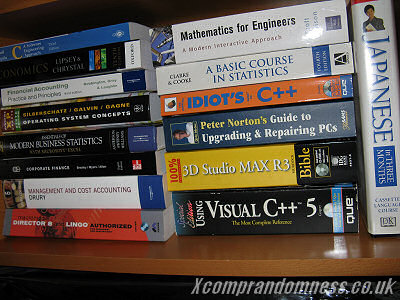 Other bits and bobs I came across while clearing out...

A print out of an Evangelion site I used to run during high school but it's gone now together with the ISP "Connectfree" I was with at the time. 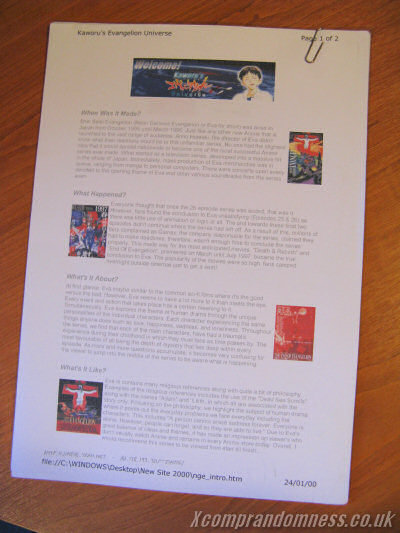 A Sonic the Hedgehog novel way back in primary school over eighteen years ago. I don't know if they still do it but, every season they would hand out brochures to the class to sell books. That's where I got this from. 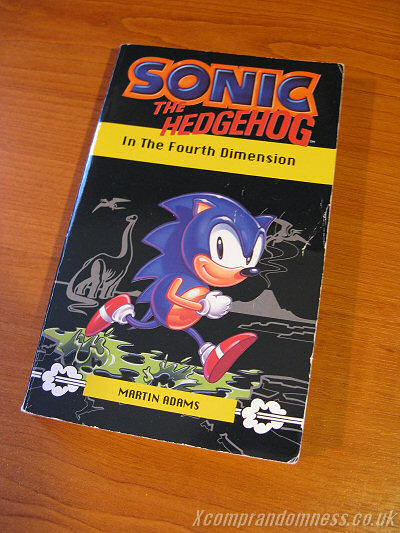 Notice Sonic in the top-right corner. Flip through the book quickly and you can watch him animated the traditional way. 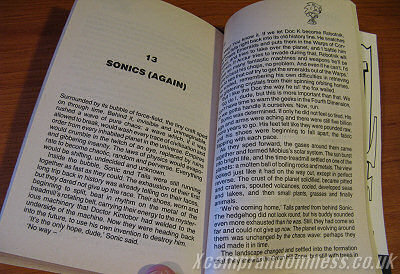 Guess what this little thing from Pizza Hut is...? 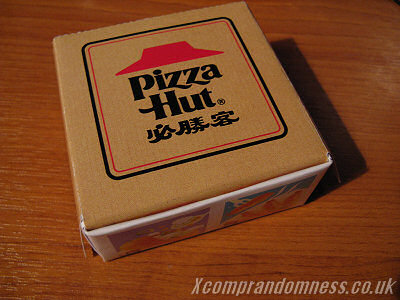 It's a "Magic Food Mirrors" puzzle! Can't remember how long ago when I got this as part of a promotion in HK. 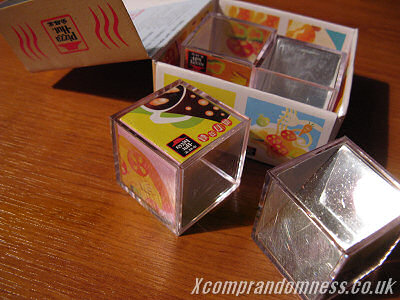 Speaking of which, they're starting to rename some of the branches here "Pasta Hut" now to convey a healthier image I think. 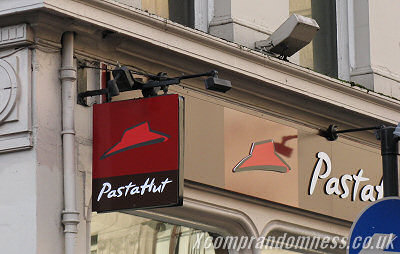 Well, the clearing out's not over yet but at least I've made more room for new stuff now. 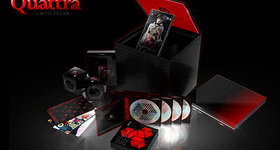 Ruliweb has a new trailer up and also reveals the limited edition of DJMP Black... 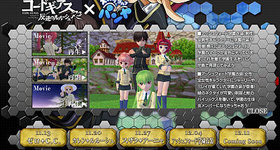 Looks like they've stopped pairing up characters in the Pangya costume event now...

@Maaya
Nope, I didn't know... I remember how happy my fellow Anime classmates were when they saw the American version in stock. I guess the demand wasn't high enough?

@Diego
Yes, it would be quite costly which is why I was just wondering how it would do in the UK. For around 4 magazines at 2kg, it's £11 by surface mail.

And it's really a good book. Just too bad it doesn't jump into Kana right away which isn't that hard to learn.

9 Dec 2008, 10:39:52 pm
I'd offer good money for those Newtypes myself, but the postage from there to here would be unimaginably high.

Interestingly, my sister used the textbook of that same language course for her own studies a few years back.

9 Dec 2008, 12:10:52 pm
Don't you know Newtype no longer exists in North America? I'm sure ebayers overseas would more than happy fight for them.

We've only got Protoculture left, from Montreal, Canada....

;_; Or better yet send them to me, I offer you awesomely nothing.. or some sort of hand sewn anime thing of your choice. =X or list your bidding auctions on ebay for the newtypes, I'll let the anime club president know about it in my uni x)

9 Dec 2008, 2:49:55 am
Haha no problem. I don't know if this saying is common in the UK but growing up in North America I hear the phrase "one person's trash is another person's treasure" a lot XD

9 Dec 2008, 12:00:22 am
@Anon
Thanks for reminding me! I did see someone selling off the posters and other little goodies the Newtype magazines come with... I'm just not too sure how well it would fair in the UK!