The story of "Sigma Harmonics" begin in Kurogami Mansion where a great Clock Tower seals away demons known as "Ouma" existing within the flow of time, creatures that can alter people's thoughts provoking them to do malicious deeds. Sigma Kurogami a "Sound User" and his friend Neon Tsukiyumi, a "Charm User" one day go out for some lunch together when suddenly the world before them lie in ruins. Fifty years have mysteriously passed and all the Sound Users have disappeared. Someone has re-written history and it's now it's up to Neon to solve the mysteries and defeat the Oumas to restore order. 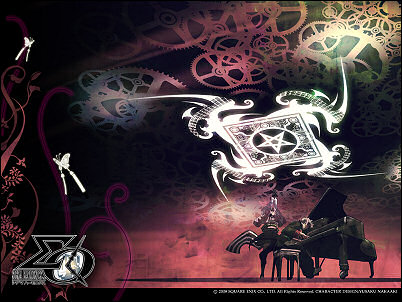 The flow of the game is basically split into two parts which are collecting clues to solve the murder as best as you can and then fighting the boss.

For the first part, you'll find yourself running around the Sigma Mansion to find giant black stones called "Soul Shadows", each giving you a glimpse of what's happened in the past. From there, Sigma creates "Sound Stones" from them which are used as the clues you need to solve the murders. You then have to lay them out on a Go like board where a number of black stones are scattered out, representing questions you must answer by placing the clues. The mysteries can be very hard to solve but the good news is the game will still let you play on and face the boss.

However, instead of allowing you to play the traditional way of running up to objects to inspect them for possible clues, you have to enter "Search" mode before you can tap on anything and this is one of the serious downfalls of the game. You have to do it so often that it becomes a real chore bringing up the menu then wait a few additional seconds for an illustration to load. The developers should really have added a hot key for it or they might have well just eliminated this mode entirely and just made it a point and click.

What's more, if you ever make a mistake, you'll have start placing the clues from scratch and although this doesn't seem much of a chore during the smaller mysteries at the beginning of the game, it becomes very tedious later on. An undo button would have been much welcome here.

Interestingly enough, the bosses in SH can be very easy, dying from a few hits if you manage to solve the mysteries perfectly. The optional Karma Oumas stalking the corridors prove to be much harder, dealing much greater damage. The great thing is that you don't have to really worry about dying or running out of health or magic in-between battles because if you die you end up being safe and sound back in the main lobby and your health is refilled after every battles. I guess SE wants the player to concentrate mainly on the mystery solving but this makes all the levelling up and battles feel awfully pointless.

Apart from the boss battles, the fights are all random encounters which I don't like but, the battle system is an interesting one where SE has decided to take a different approach. Enemies surround Tsukiyumi in a circle and instead of a menu of commands, you have a set of three cards laid out. Dragging these onto a rectangle gives a command such as "attack left" and "attack right" making Neon turn correspondingly and stay facing that way.

What the cards do depends on your current job and BGM selected, both of which you can change on the fly during battles. Changing jobs gives Neon a different personality, skill set and perspective on the mysteries. There's a great deal of combinations that can be used which makes it fun mixing and matching before battles and yes - you can change the BGM too! This decides which of the skills in the skill set you can use and also decides how long you must wait before you can use each card making it another fun new way to battle since "The World Ends with You".

It's not without its faults however because whenever you switch BGMs or jobs during battle, you don't know what moves you'll end up with, making you feel there's a lack of control and the battles stretch out longer than necessary.

Holding the DS vertically, there are no animated scenes but the illustrations used in the slide shows are definitely of the quality you would expect from SE. All very beautifully rendered mixed in with some equally beautiful music. Murder scenes are pretty gruesome, focusing largely on the blood and leaving your imagination to picture the rest of the victims.

There's a good blend of 2D and 3D graphics with only the character models being 3D. The backgrounds are only 3D when in battle and the models are in full proportion instead of following the FF remakes that make of the small chubby "chibi" designs. You can see the artists have given attention to detail as you see the different bits of the clothing swaying about which is rare on the DS.

Saying that however, there isn't a great variety of locations because the entire game takes place in the Sigma Mansion. There's a few seconds of loading time delay before each battle which slows the down the pace of the game and this isn't helped by a slow interface.

On the sound side of SH, you'll be hearing a lot of clock ticking and frankly, it really gives the Chrono Trigger feeling. At first, you maybe fooled the entire game is voiced but once again, it's only the main scenes. Those who are fans of Haruhi Suzumiya will recognise the voices right away with Daisuke Ono as Sigma and Aya Hirano as Neon. I found it pretty funny hearing Jun Fukuyama's voice when he's playing such a big role in Code Geass airing just now.

Overall, Sigma Harmonics presents a new interesting approach to mystery solving mixed in with an RPG element but unfortunately, the improvements the game needs far outweighs the enjoyment of the game. It doesn't help when the story is rehashed so many times for each chapter, making the whole idea of changing history a boring one. It is definitely not Time Hollow. It is good to see a company like SE continuing to try and break the mould, though. 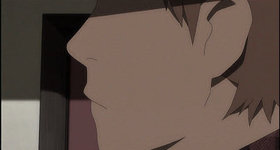 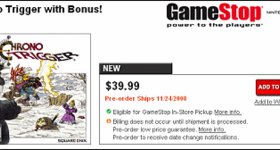 26 Sep 2008, 2:13:35 pm
Hmmm, hard to say since I can read Japanese... You'll need to be very literate to solve the mysteries but as I mentioned, you can still fight the bosses and get on with the game even if you don't manage to solve them.

25 Sep 2008, 7:40:14 pm
Jun Fukuyama does some amazing seiyuu work.
I'm interested in getting this, but how much Japanese is required?