The conveyor belt sushi in front of Shimokitazawa Station is so delicious! - Mikako

It was morning. Sora was lying in her bed, still bothered that her magic didn't work out the way she wanted for the Konda family. 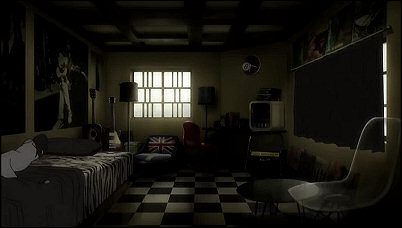 Soon it was time to go to school. She sets out with Gouta who notices something was wrong with her. Sora usually had extra helpings at breakfast but today was the first time she didn't ask for more. Sora blushes over the concern Gouta showed for her and cheered up a little.

Today, they all had the afternoon off because it was self-study period. Kuroda and Asagi were the first ones in. Asagi was sweating badly and complaining about the heat. She didn't like it at all and could be considered her weakness. Hesitantly, Kuroda tries to ask Asagi out when they are interrupted by a call. She picks up and Kuroda sighs as he overhears she'll be out later to pick up something she's been waiting for. 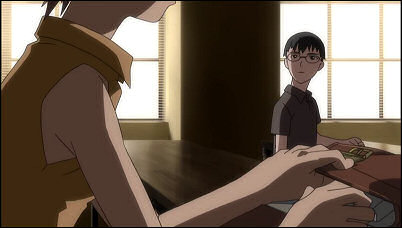 Meanwhile, Gouta was out in the lobby for a drink. Yamabuki happens to pass by looking for Sora and wonders if he had seen her. He tells her he has because they came in together but after seeing how surprised Yamabuki was, he changed his mind and said he just saw her at the station. He is asked if he wants to join the others and spend the afternoon together. Gouta wasn't too sure and decides not to. Yamabuki was a little disappointed, thinking it would be more fun the more people there was but Gouta still didn't agree to go. 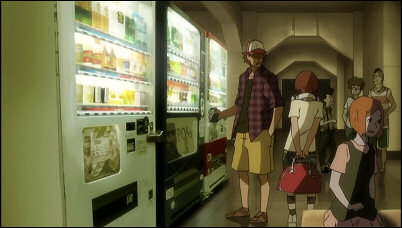 The class began by explaining how mages who signed the Yokohama Treaty are protected by the Human Rights of Mages and the Magic Labour Legislation. Sora couldn't concentrate though, still thinking back about what happened with her last request and Seiichirou's words. Magic wasn't perfect. After the lecture, Gouta also gets some encouragement from Morishita who knows he's been working hard at his magic skills. Morishita tells him learning magic was like riding a bike. Once he's managed once he will manage fine.

Sora was on her way back home but ends up being invited along to go out for the afternoon with Asagi and Yamabuki at Shimokita. As they walk off, Sora gets worried that they might come to where she was staying. Gouta happens to drop by and lets her know he won't leave his room so that they won't know they're staying together. He didn't like seeing Sora down and reminds her she looked best with a smile before walking quickly ahead. 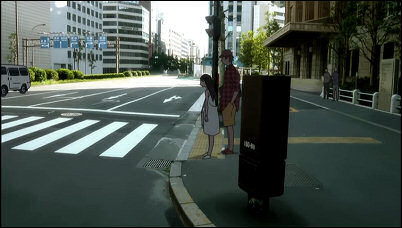 And so that afternoon, Asagi leads them to a cafe named Arlequin which was a nice relaxing place with some good food. There they decide to pick up some pastry and go to Sora's place. They notice she didn't seem too happy and start to get a little suspicious about her place.

Arriving there they find a surprise guest sitting outside the house. It was a little girl in a blue dress reading a book. Sora didn't recognise her. They approach her and find out she wanted a mage to help give her a baby. This surprised the girls but Sora kept a light and serious attitude. She lets her know she has to apply for an official request before they could do anything.

The little girl cries, claiming her parents had passed away and her new step family was being very cruel to her. They find out her name was Ruriko Nishihara but she wouldn't explain why she wanted a baby. Asagi insists it was best if she just went to her parents to ask for one because she had never heard of any magic that creates babies. Hearing this, Ruriko puffs up her face and runs off claiming she will just take one from the nursery. 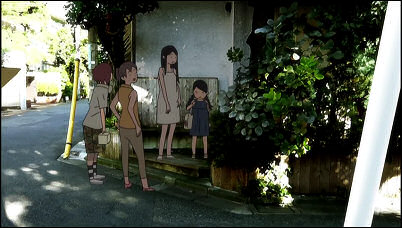 Worried about Ruriko, Sora decides they should go find her. She remembers how it feels when a child tries to explain but no one understands. Asagi wasn't very happy about the idea about wasting their day on someone they don't even know but agrees to help out anyway, just for Sora. They split up searching everywhere and asks in shops whether anyone had seen the little Ruriko but no one did.

After some time, the friends gather together again for a break. They were all tired from the heat. Sora walks off to get themselves all a drink from the nearby vending machines. She apologises for wasting their afternoon like this. Asagi wonders if they should resort to magic since it looked like they had no other choice but, Yamabuki reminds her they could get into trouble. However, Sora now wonders if there are times they need to break that rule. Times when they have to no time to get permission first. Like now. Sora decides it was such a time but none of them knew a spell that lets them find people. They then set off to find Ruriko again. 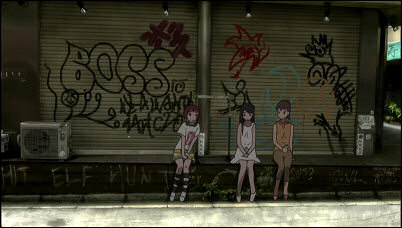 While Asagi and Yamabuki were going around the nurseries to see if Ruriko was there, Sora makes her way up to a high building in the hopes of seeing Ruriko somewhere. Just then, her phone rings. Asagi and Yamabuki had found her. Asagi had recognised the symbol on her little handbag. It matched the cafe they were at earlier. Sure enough, little Ruriko was there. Her parents there laugh explaining how they were surprised when their daughter had ran in and suddenly asked them for a baby.

It turns out Ruriko wanted a baby of her own to play with because her friend Ayumi wouldn't let her play with hers after she made her cry by blowing her pianica. Hearing that, Sora suggests maybe it'll be better if she tries reading a picture book to her such as Cinderella to her the next time. 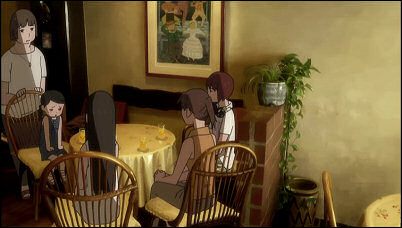 Settling down, they look about the bakery and notice it was a special little place with lots of wooden puppets and drawings. The Nishiharas liked to collect them explaining "Arlequin" meant "clown". The word was more commonly used in Europe while in America, another name for clown is "pierrot". Just before they leave, Ruriko stops Sora worried she won't be able to make up with Ayumi again but, Sora encourages her by making a white lie, saying they had cast magic to make sure of it. 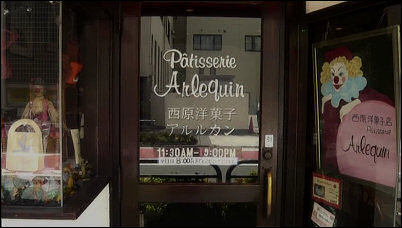 The day was getting late and it was time for the friends to separate at the station. Sora and Yamabuki thinks back to how Ruriko had lied to them and laughs. They had fallen for it. As Asagi talks on the phone again, Yamabuki thanks Sora for the day. It was the first time she done anything with her new mage friends. They wave goodbye.

That night, Sora was having extra helpings again. Suddenly, Gouta's phone rings as an e-mail arrives. It was from Kuroda. He was going to quit his training. 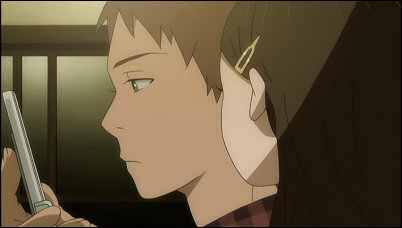 We want Honomi-chan to get mad as us, don't we? - Kana 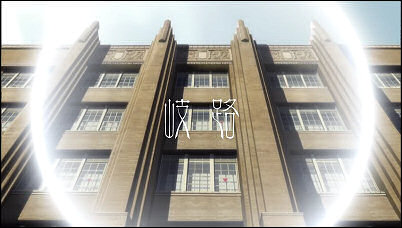 Funniest episode so far though just watching Sora and her new friends going on their search for Ruriko. Lots of funny moments!

Asagi doesn't seem so bad here, making the effort to go through the heat to help find the girl. Had to laugh when she was so direct and told Ruriko to ask her mum and dad if she really wanted a baby! Usually people just make up a story to explain, don't they? Also funny watching Yamabuki crawl around in the music store and run off from the nursery!

Really like the soundtrack that was being used during the search. I also wonder if it was another excuse to show off Shimokita. Not that it's bad or anything because I always like seeing more of Japan. Maybe I'll even head there to see the place myself!

I wonder if these are all actual places they're using in the show? And do they spend time removing people from the photos? None of them show any people in them. I guess it wouldn't be hard if you were using a tripod and shot multiple shots at different times then patched them together later. 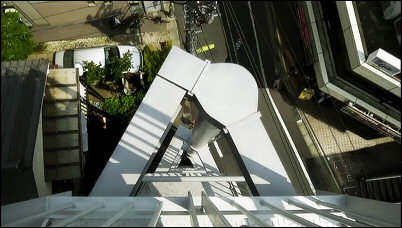 Noticed this spikey haired guy seems to have been at the station all day! 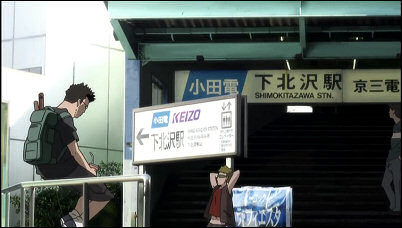 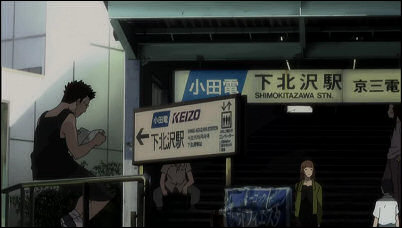 On another note, I'm still watching the opening whenever I watch this show. Thyme's "Fly Away" is too good! 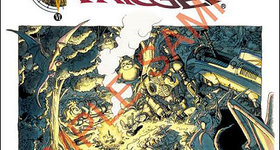 Japan finally gets a date for the re-release of the epic RPG Chrono Trigger on the DS... 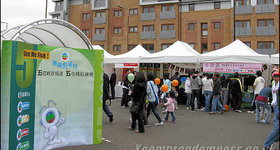 Watched the "Happy Family Gala 2008" programme last night but, they only showed the...