As the Black Knights launch their attack to reclaim Area Eleven, Lelouch sets out to meet Suzaku at the Kururugi Shrine where they first met. He had no other choice. 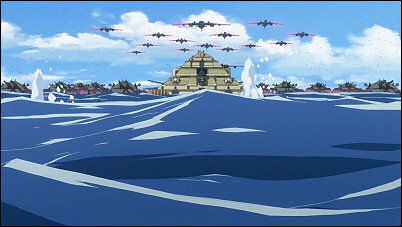 Britannia's empire was still significantly greater than the UFN but, Kaguya was sure more will join them if they can win this battle, proving that they can stand against Britannia's might.

Lelouch soon arrives at the bottom of the long stairs leading up to to the Kururugi Shrine. It's been eight years since he and Suzaku met, the time when he and Nunnally were entrusted to the Kururugi family's care. Suzaku's stubborness was something that led them to become friends in the end. Lelouch's very first friend. And now, Lelouch was counting on him, hoping Suzaku will accept their friendship once again. 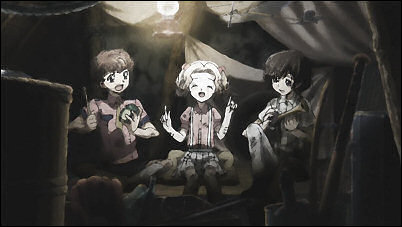 The Knights of the Round, Waldtstein and "Vampire" Bradley were out to join the battle as Xingke lead the attack towards the Coast of Kagoshima. The Black Knights were having trouble holding against the two powerful Knights. The Four Holy Swords were starting to become impatient as they lay submerged under the sea. Toudou remains faithful in Zero but his companions Asahina and Chihiro was thinking otherwise. Zero was keeping too many secrets from them. What will they do after they reclaim Japan? 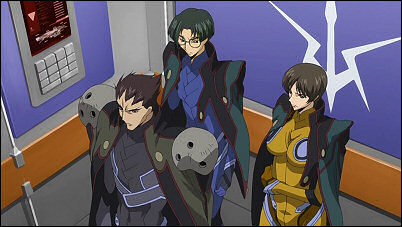 Lelouch was now standing face to face with Suzaku who didn't believe he had the courage to show up. Suzaku was furious as he took out the badge Eupheumia had left him with. He demanded to know if Lelouch really was responsible for using his Geass powers on her to massacre the Japanese. Lelouch looks away, hesitating but replies it was him. He claims the Black Knights would have collapsed if Eupheumia successfully established the Special Administrative Zone of Japan at the time. He also admits Shirley's death was his fault.

Dropping to his knees, Lelouch once again begs Suzaku to save his sister Nunnally. He will do anything and give up all just to save her. Suzaku's rage wells up as he presses Lelouch's head down to the ground mercilessly with his foot, piling on the pressure. He wasn't forgive Lelouch because nothing was going to bring back the dead now. 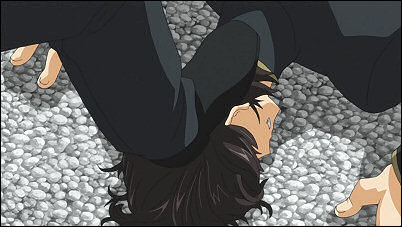 Suzaku picks up Lelouch roughly and throws him back onto the ground demanding to know why he used Geass to make him live on. Lelouch answers he had wanted to survive at the time and only saved Suzaku when he was charged with treason because he had wanted to gain the trust of the Japanese. Looking at Lelouch now, Suzaku was reminded of the same eyes he saw his father had. They were of someone who were taking all blame while trying to hide something. Reminded of how he joined the army so that the same thing wouldn't happen again, Suzaku calms down. He saw through what Lelouch was doing and now believed it was possible for his to use the mask of Zero to bring the world to peace.

Agreeing to help Lelouch once again for the sake of Nunnally, Suzaku reaches out his hand to help him up but suddenly, a shot is fired between them. Schneizel knew all along Suzaku would meet up with Zero and had Earl spying on them. Surrounded by the Glaston Knights, Lelouch is dragged away as he cries out to Suzaku thinking he had betrayed him again. 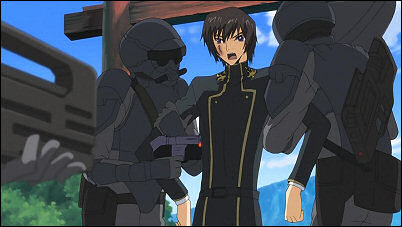 Meanwhile, the imprisoned Kallen was wondering which side of Lelouch was real after her talk with Nunnally. Her thoughts are interrupted when Weinberg arrives with a photo album in his hands. He shows it to Kallen letting her know he found it in Suzaku's locker and thought he could use it to cheer him up a bit. Some pictures had been removed, mostly of ones where she was with Kallen.

As she watches Weinberg flipping through the pages, she notices one where Suzaku was smiling together with Lelouch and remembers what good friends they were. Weinberg remarks he had never seen Suzaku smile like that since he joined them as he closes the book. He then wonders if Kallen, the half Britannian half Japanese was willing to join them for a better life. 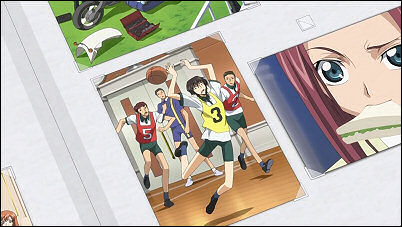 Back at the shrine, Lelouch is thrown into inside a vehicle as his older brother Schneizel greets him. It was sad to find out that his own younger brother was Zero but having pity, he was ready to help speak with the Emperor to try and spare his life at least. If Lelouch was to place his trust in him. Lelouch doesn't want his pity and had made the decision not to trust anyone any more. His best friend had betrayed him twice after all.

With that, the Geass command he had placed on Guilford earlier is activated. He had Jeremiah call him out to a warehouse where he used his Geass to make Guilford see him as Princess Cornelia whenever he done a certain pose. Guilforrd frees Lelouch and flies off with him as Lelouch eyes his first and last friend. 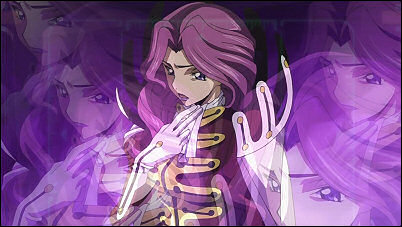 Not long afterwards, Suzaku is taken to see Prince Schneizel. He wanted to place his trust in Suzaku in helping him now that his brother Lelouch had refused. He gets Earl to replay the conversation they had had and then asks what role was Suzaku playing right now. Did he consider himself a Japanese? Or was he an honorary Britannian? The Knight of Seven? The son of the Prime Minister Genbu Kururugi? Or perhaps still trapped in the time when he was still Eupheumia's Knight or Lelouch's friend. Schneizel wanted a straight answer from him. 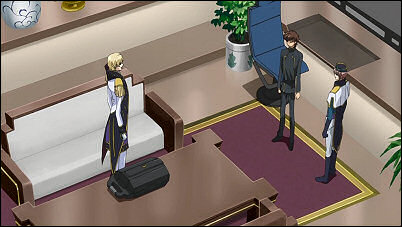 Lelouch was on his way alone to the Tokyo Settlement now together with Guilford and Rollo. Despite the Britannian forces there, the whole area was brought to a stand still as he turns on the Gefjun Disturbers he had set up on the rail networks. He gives the order for Todou to join him. It was time for them to rescue Nunnally now that he could no longer depend on Suzaku. Rollo was already infiltrating his way to where Nunnally was. 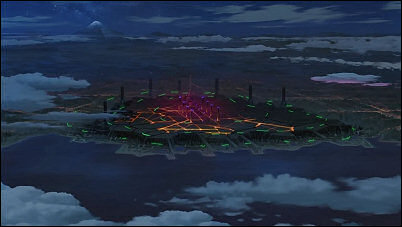 Having not revealed Lelouch's true identity, Suzaku should have been punished but he can't be because he belonged to the Knights of the Round. Instead, Earl suggests he find his own redemption. Suzaku gazes at his Lancelot which was mounted with Freya now. Did he really have to use it against Lelouch? 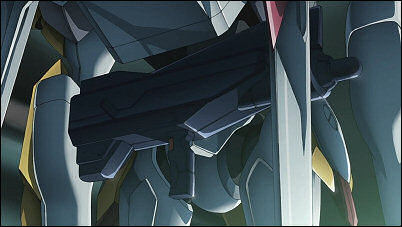 Next episode, "The Second Decisive Battle of Tokyo" 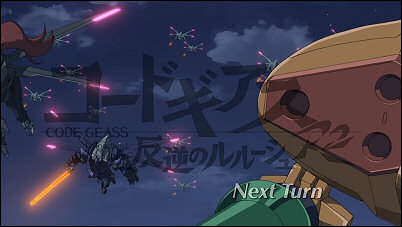 Well, that was must have been painful for Lelouch. Did Suzaku really have to step on him like that as if he was crushing some irritating cockroach? Too bad Schneizel messed up their little make-up and pushed Lelouch over the edge. Now he's really turned into the devil as his last friend who he tried to confide in is gone. I still can't help but think of Gundam Seed whenever I see the two best friends attacking each other because of their believes. Ah, the drama.

He looks like the evil one from this angle and proud to be. And er, nice sound effects. 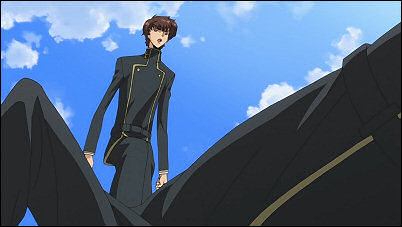 Those Gefjun Fields Lelouch installed on the trains sure came in handy. Guess he's geassed the entire rail network staff to keep it hidden away since his confrontation with Jeremiah.

Guess C.C.'s trust is growing in her "new master" from this shot. Kind of random during the episode. She's starting to get less screen time. 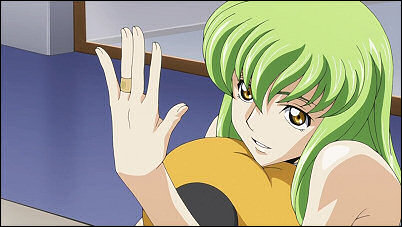 I'm kind of wondering if the viewing rate for the show is dropping. With only 1 hour to enter after these competitions after the episode, you really have to be there to watch the show for that password if you have any hopes of winning any other similar competitions.

Haven't tried this DS board game yet. 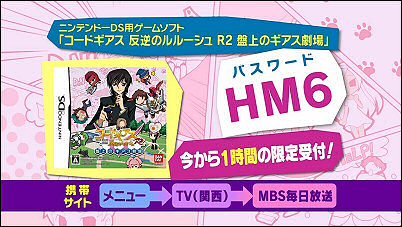 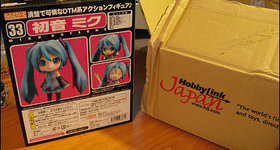 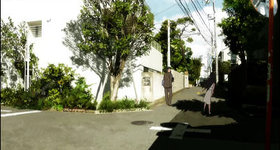 Episode 5 Summary - Shimokitazawa Do you like "tsundere" girls? - Marina It was a hot...