Lelouch was now back on his ship ready for the next phase of his plan in his fight against the great empire of Britannia. 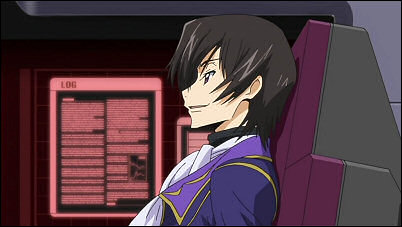 He believed Nunnally was safe for the time being. His father must be trapped in the World of C when the temple collapsed and now Britannia was in a state of panic as they decide what to do now. Leaving a nervous C.C. behind, he goes to visit his older sister Cornelia who Orange had captured from the Geass base. She was not happy to see him, still convinced that he was responsible for Eupheumia's tragic death. Lelouch permits her to join them by giving her a Sutherland to pilot and explains that he just wanted to create a better world for Nunnally. 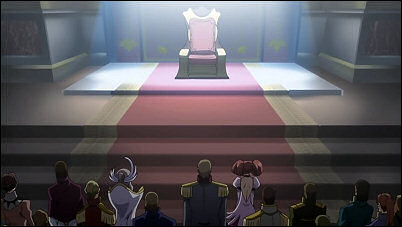 Meanwhile, members of the Black Knights who had been involved with the operation at the earlier still couldn't come to terms with what they had done. Asahina drops by and wonders what the blood on their Knightmares were. Just as Kinoshita was about to explain, Rollo steps in reminding him that Zero had placed an order for all to keep quiet about the operation.

A conference was underway as Zero confirms that there were enough countries for them to form an alliance that rivals that of Britannia's empire. By establishing a United Federation of Nations, they will be able to stand up against their might and wage war to free the other countries that were conquered. Their first target will be Japan and by securing victory, they believe they may attract more nations to join their cause. 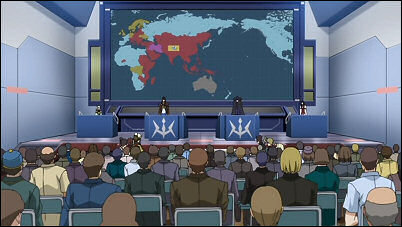 After the conference, Lelouch returns to his room with a pizza on a trolley. C.C. must have been hungry by now but she was still nervous around her "new master". She gazes at the pizza, unsure of what it was but was attracted to the smell. It wasn't until Lelouch took a slice and invited her to a piece did she eat quickly. Lelouch watches her sadly, knowing that her memories have returned to the time when she was a slave before she had received her Geass power. 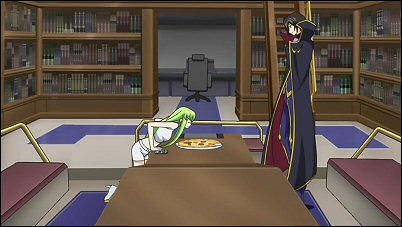 Back in Britannia, Suzaku was starting to become unsure of himself. Unsure of the ways he has been following since eight years ago. Anya was with him and wondered how Suzaku could still follow such disciplines that go so far back. For her, she can't remember anything even though she had kept a diary going as far back as nine years ago. A thought strikes Suzaku. Could the Emperor used his power on Anya too? But why?

Suddenly, a dart is thrown towards Suzaku. He captures it with ease. He looks up to find Bradley, the Knight of Ten. Smirking, Bradley approaches Suzaku, provoking him by talking of his betrayal and calling Eupheumia a genocidal princess. Suzaku is angered, prepared for a duel if he was to bad mouth his beloved Eupheumia any further. Bradley was unmoved and was more than welcome to fight Suzaku. 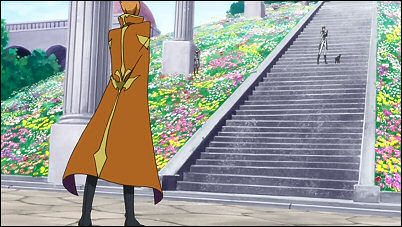 Before they could start, the Knightmare Galahad steps in between them. It was the Knight of One, Waldtstein. He gives the order for them all to be on guard and to be ready to follow Schneizel's orders while the Emperor was absent. Bradley backs off and moves elsewhere.

He moves into the room where Kallen was being kept, where Nunnally was having a fun time talking about Lelouch with her. The "Vampire" was thirsty for blood and was now targeting the Ace Pilot of the Black Knights. However, he is against interrupted. This time it was Weinberg who wasn't going to stand by and watch. Immediately, the Vampire turns round and tries to provoke Weinberg instead, claiming he only got into the Knights of the Round because of his family name. 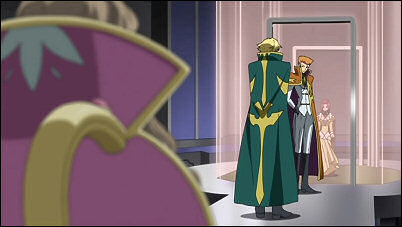 As the Britannia forces gathered, Suzaku and Anya were now with Lloyd has he explains the new arrangements he has for their Knightmares. He was planning to mount Freya, the bomb that Nina had successfully engineered, onto his Lancelot. Suzaku was unsure he was ready to use such a device against his own people but is reminded he was once Eupheumia's knight and his purpose is to bring Zero to justice. Lloyd turns round to face Nina and tells her it wasn't something that Suzaku had to bare. She too will have to accept the responsibilities in the end which could mean her own death.

It was time for the ratification ceremony as the forty-seven countries agree to be united under Zero's leadership. Kaguya finishes off explaining the terms within their treaty which includes giving up their military power. In return, the Black Knights will guarantee the safety of all nations while also being funded by all nations. She proposes that the Black Knights help free the United States of Japan and the leaders stand up to agree. Thus, it is agreed that that will be their first target. 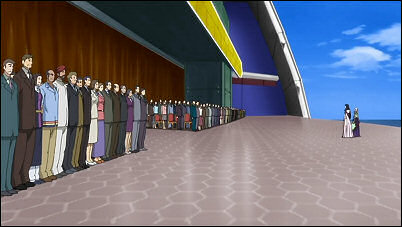 As the Black Knights cheer knowing that they may finally be able to reclaim their homeland, their international broadcast is interrupted. Appearing on the screen was the Emperor who praises Zero for his efforts and how he now managed to divide the world into those who were either Britannians or weren't. The stakes were high now, meaning that if either side won, it will mean they win the world. The Emperor raises his fist into the air to shout out their slogan "All hail Britannia!" but, the Japanese weren't going to lose out either. Todo raises his sword and shouts out, "Long live Japan!" and the crowd follows.

Lelouch returns to his quarters panicking knowing the threat he dreaded most was back. He had to get Nunnally out of Britannia now. He rushes through a number of ideas but none of them were going to work. As the frustration grew, C.C. brings over the slice of pizza she had left for him, knowing that he hadn't had any breakfast. But Lelouch didn't want to be disturbed. He throws his hand back and knocks C.C. onto the floor. The plate smashes and the shards cut C.C.'s hand. 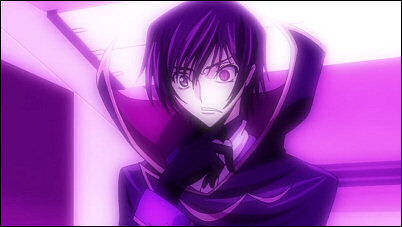 She shields herself as Lelouch approaches her, apologising frantically, worried she will get punished. To her surprise, Lelouch takes her hand as his face of anger turns to one of concern. He trembles as he remembers what C.C. had to endure. C.C. tells him the external wound was nothing because it was something she was used to. In her opinion, it was better than having her heart hurt. Lelouch looks at her and asks what she used to do when she was emotionally hurt. C.C. hesitates and replies she would talk with her friends. 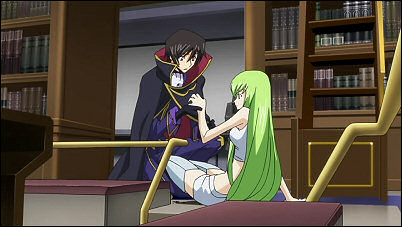 After bandaging C.C.'s finger, Lelouch calls his old friend Suzaku. He is surprised to find Suzaku picks up but was also ready to admit he had regained his memories as Zero. Suzaku's attitude changes wondering what his enemy wanted from him. Lelouch wanted him to save Nunnally because he knew the Emperor will use her against him and don't know how she will end up suffering. Suzaku was the only one he could depend on now.

Lelouch desperately begs his old friend and enemy to protect his sister as the tears well up in his eyes. Suzaku finally answers yes but on one condition. Lelouch was to meet him in Area Eleven, at the Kururugi Shrine where they used to play around a lot. 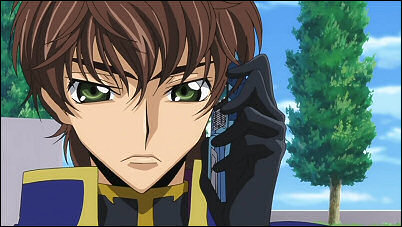 Next episode, "A Taste of Home Soil" 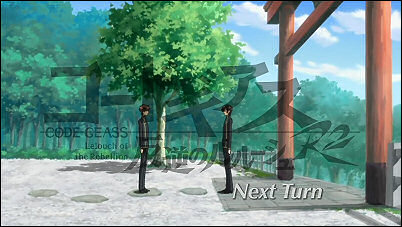 Pretty funny watching Suzaku get beaten up like that all of a sudden. He's usually the one in control when he's around Kallen. I guess at least he's man enough to take the punishment for the way he treated her earlier. Those are some nasty punches from Kallen... Also interesting to see Weinberg standing up for the ladies when "Mr. Vampire" was about to harass them. A bit of inner conflict going on here eh?

Looks like Lelouch is really in a troubled spot now. C.C. had been the only one he could confide in throughout the show so far but, now that her memories have returned to the time she was a slave, she can't really help him as much as before. Now he's forced to call back his old friend who is also his enemy. Quite a development and contrast. All that power in his hands yet, he's cornered because the reason he is fighting is being held captive.

Now why does Suzaku and Anya look so weird in this shot? It looks like they're embarrassed and avoiding each other over something here. 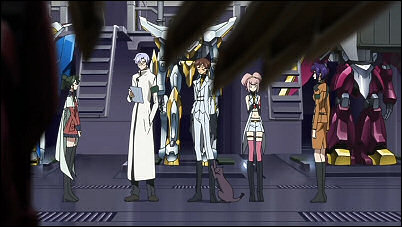 And yes, I know I'm behind but I've been busy for the past few weeks. Catching up with the show now. 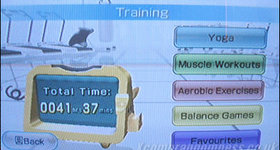 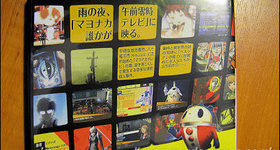