Episode 15 Summary - The World of C

Lelouch's father Charles, Emperor of Britannia, now stood before him. He hadn't expected to confront the father he hated so soon. 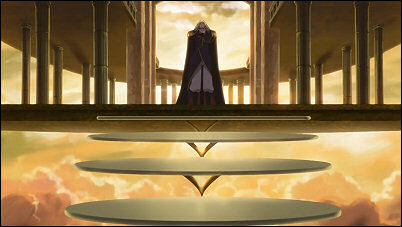 Quickly he hides behind his Shinkirou knowing that Charles could manipulate his memories again. Challenged, he launches a large number of small mirrors into the air and uses his Geass, commanding his father to kill himself. Charles was surprised. Obeying, he slowly draws out his handgun and shoots himself in the heart.

Slowly, Lelouch appears with disbelief that he had managed to win. However, to his horror, Charles was not dead. Geass was ineffective against him. He has inherited V.V.'s power too and was immortal. He gets up as Lelouch backs off and rushes for the gun Charles had dropped and fires several shots but, Charles smiles deviously. Lelouch gets knocked down, his confidence dented knowing that he may not be able to defeat his father. 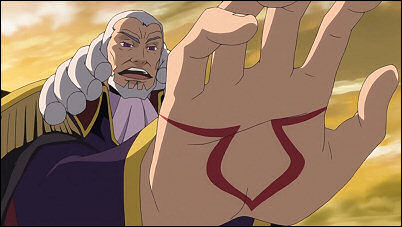 Being knocked to the bottom of the stairs, Lelouch is transported to a place full of large rotating gears. Charles appears before him again. Lelouch demands to know what Geass is but is answered with a question. What did he gain by using the mask of Zero? A great number of things that a student couldn't have, answers Lelouch. An army, subordinates and territory.

However, the masks around him know that he has also lost other things such as having to hide his true identity and also Eupheumia, lying throughout his life. Lelouch thinks he has done no wrong because he believed everyone lies to get by in life. Charles on the other hand thinks there is no need for lies because everyone is just the one person in the end after all. 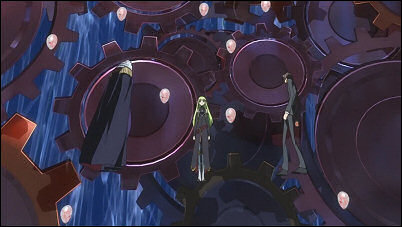 C.C. suddenly appears between Charles and Lelouch to stop the teasing. She reveals her wish was to die and only the ones who has mastered the power of Geass can do it. Lelouch is shocked as they debate the meaning of life, C.C. believing that life means a person has limited time to live with death waiting at the end while Lelouch believes it is to be alive. C.C. challenges him to kill her which will grant him the power to fight with Charles but, it was impossible for Lelouch at this stage. He is sent away before he could say anything.

Moments later, Lelouch found himself outdoors. A young girl in ragged clothing, a metal ring around her ankle, was struggling along the bare path. Lelouch reaches out to steady her only to find her falling right through him. C.C. also appears but doesn't seem to recognise him. She tells him they were inside her memory. 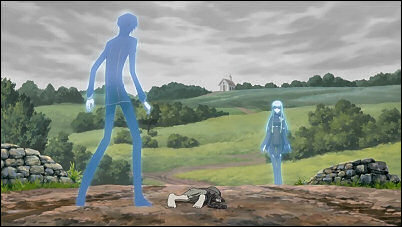 As her past memories are replayed before them, she explains that a nun had granted her the power of Geass and in return, the nun wanted her to grant a wish one day. C.C. accepts the contract because she wanted to live and to be loved by someone. As a result of that, the Geass power that manifested allowed her to make anyone love her. However, she was loved by so many that she eventually didn't know what true love was. The nun became the only one she could trust because her Geass was ineffective against her and often C.C. would get scolded for fooling around with the power. 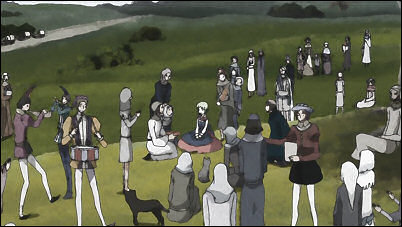 Soon, C.C. had mastered the power, the Geass symbol glowing brightly within both her eyes. The time had come for the nun's wish to be granted. She had fooled C.C. because she needed someone to master the Geass so that she could pass on her immortal life and die, freeing herself from the suffering through the long years of living. And so, the nun's wish was fulfilled while C.C. was granted immortal life. 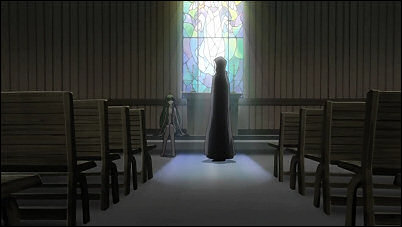 The mysterious C.C. and Lelouch were standing in a room full of paintings from her memories now. She tells Lelouch that he must be a very important person to the real her because, she had sent him away as if to protect him.

Meanwhile, the "Prayer" experiment at the Dallas Laboratory was also underway and were a success thanks to Nina's hardwork. There will be no need for war. Nunnally on the other hand now gained the courage to make sure the Area Eleven redevelopment plans were carried out for the inhabitants benefits. 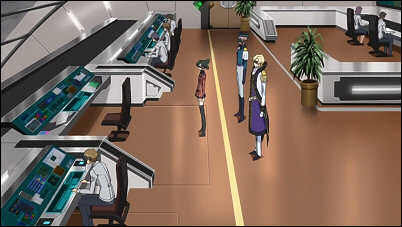 Suzaku was also interrogating Kallen and was about to use Refrain to make her talk but a recollection of Lelouch's actions stops him. He was not going to manipulate people the same way Lelouch does. He rushes to the academy so that he can speak to Lelouch directly but instead, learns the secret intelligence department were completely taken over by Lelouch. Not only that, returning to Nunnally's side he also learns that she had already known it was Lelouch that was on the phone. 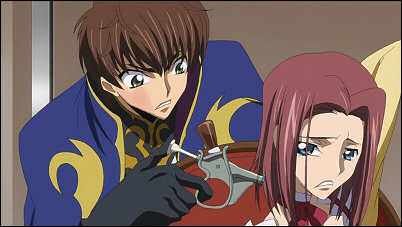 At another place, Viletta was out to meat Ougi secretly. She finds him and points her gun at her, still determined to show her royalty to Brtiannia and get rid of anything which could be used against her in the future. She demands to know why Ougi didn't kill her and becomes infuriated to hear him confess that he loved her. Interrupting them, Sayoko appears. Understanding Viletta may become a threat to Lelouch, she attacks while Ougi tries to stop her. Forced to the end of a cliff, Ougi dives in to shield Viletta from the Kunais. He falls back and Viletta jumps after him as both of them fall towards the rocks below. 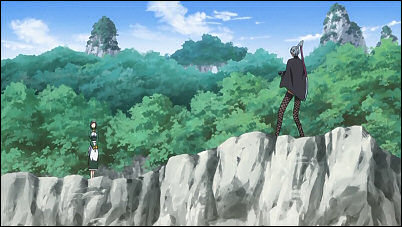 Back at the Sword of Akasha, C.C. reveals that she wanted to die because she had to suffer the loss of all her loved ones over the many years of her immortality. Just as Charles was about to put an end to her life, Lelouch had broken out of the World of C and was back in his Shinkiro. He demands to know why C.C. hasn't tried to develop the Geass in him all this time and then pass on her immortality to him. He wasn't going to watch C.C. die with a sad look on her face. He wanted her to smile to the very end. 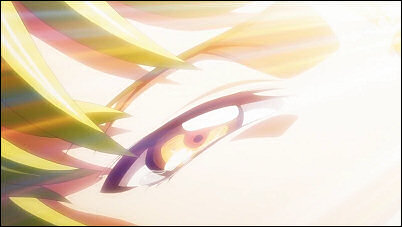 C.C. breaks free from Charles and frees the Shinkiro. Lelouch strikes out at the temple, destroying the area. He desparately calls out to C.C. knowing what her true wish was from the flashback. He manages to rescue her and the two sit by the Twilight Gates. However, to Lelouch's surprise, C.C. seemed like a completely different person. She did not recognise him and was wondering if he was her new master telling him about what she can do. 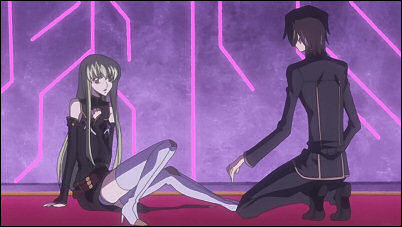 Next episode, "The United Federation of Nations First Resolution". 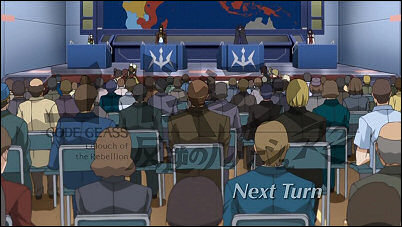 It looks like the Geass power depends on the contractee's inner desires... Or should I say subconscious? C.C. wanted people to love her since she seemed to have escaped as a slave, judging by the iron ring around her ankle. That probably means she lost her family too.

Lelouch likes to take command as we all know since season one which explains his power to control. Mao's Geass allows him to read the minds of others probably because he's insecure and wants to know what others think of him. Rollo wasn't granted the power, he was a "failed experiment" so his time stopping Geass can be explained too.

So what about the Emperor? If he can manipulate memories, does that mean he may be regretting Marianne's death? He wants to seal away that memory and that's why he has the power to rewrite memories?

Quite a quick paced episode this one and we finally know what C.C. has been after even though most had already guessed she wanted to die. We also get to see that "CLAMP" illustration from the first season's ending one too. I thought she would change her mind after all the time she spent with Lelouch and towards the end of season one but, I guess not. Quite a change in voice. With Kallen still imprisoned, I guess they'll be using her as the new fanservice character.

I wonder if an immortal Geass user loses their memories when they get killed because that's what seems to have happened to C.C. Perhaps they lose only the memories they got during their extended years. It looks like C.C.'s suddenly back to the little girl slave she was.

Also good that they cleared up what Geass is but, its origins are still unknown. I still don't quite get what the "World of C" is and where exactly did C.C. escape from during that memory playback. Charles getting back up was also predictable. I wonder what is he going to do now with Akasha destroyed and, where is Marianne? 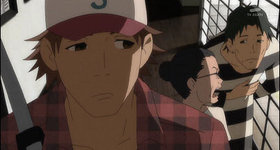 Episode 3 Summary - Sora It's been so hot lately! Be sure to keep yourself hydrated!... 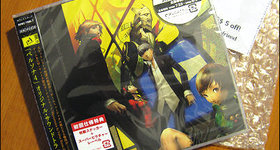 Had the Persona 4 OST pre-ordered with Play-Asia long before I got the game because I...

Maybe Okouchi will use her as a twist and make the mastermind behind everything happening in the show.

28 Jul 2008, 10:33:02 pm
I don't know if it was this ep or the previous one, CC confronts VV's corpse and cryptically remarks that VV cherished or loved Marianne too didn't he?

Perhaps Marianne is indeed dead, but the way she died is riddled in mystery. Who did it? If VV cared about Marianne then not him. It's not Cornelia, or Clovis. We've got a ton of remaining siblings, and the possibility of Schniezel knowing something regarding her death.

Anya's mobile cryptically points towards her eventual betrayal (assuming Mordred betrayed Arthur). Anya's memories have been rewritten, but her resemblance to Marianne is uncanny. If possible I propose Anya being in the know of Marianne's death/location. Or relative status to Lelouche somehow. =)