Persona 4, Naoto Shirogane and Piecing the Clues Together

The final mystery character in the Persona 4 team is revealed and his name is Naoto Shirogane.

Also known as the "Detective Prince" amongst the media, Naoto is a first year high student invited to Inaba to assist in the investigation of the bizarre serial murders and thus, drops by the town every so often. His good looks attract the attention of many girls but all he would say to them is that he isn't interested in them or in having fun. During his investigation, he comes across the MC and his friends and appears to be waiting for them at one point to speak to them about it too. He may have some important clues. 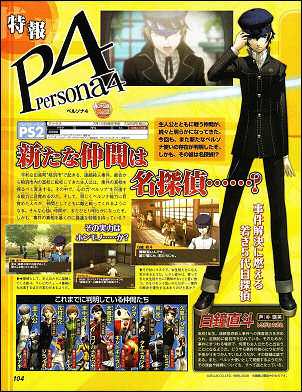 His initial Persona is Sukunahikona who according to Japanese folklore in forming the world. He is a "Kunitsukami" which is used to refer to any god that exists on land.

Famitsu also introduces two more the social links available which will be the MC's little cousin Nanako Doujima and his uncle Ryoutaro Doujima. Again, not much we don't know already apart from how the Doujima home is pretty much deserted because of how busy Ryoutaro is with the murders. Nanako is also lonely because of the little time her busy father spends at home and eventually treats the MC like her older brother. 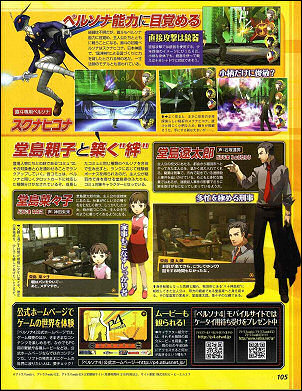 As for the website, there's a video showing how the MC changes Personas during battle and how Kanji gets spied on by the investigation team. He manages to scare them away and once the team manages to get to safety, Chie comments how he's as fearsome as he looks on TV. Yukiko on the other had concluded it really must have been him they saw on Mayonaka TV. 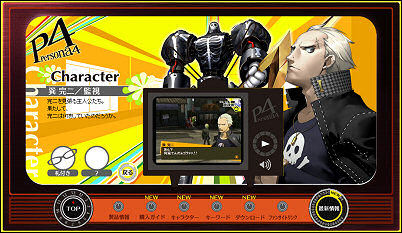 Under Keywords, a new video named "Clues" have been added to the Serial Murder Cases topic showing the investigation team together at a shop.

There, Chie spots something they had come across while they were inside Mayonaka TV. Yosuke catches on, remembering the room full of faceless posters they were in. Was the clue pointing to Ana Yamano? The shop keeper overhears and asks if they were friends of her and Yosuke takes the opportunity to ask if Yamano had owned something similar. To their surprise they learn that Ana did indeed own a piece of clothing similar to what they were refering to because it was tailor made to fit her. 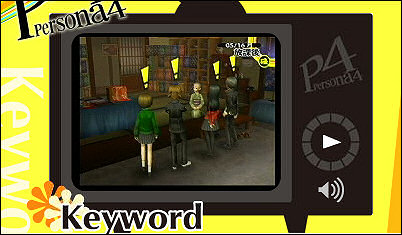 The site says the player will have to scrutinise all the clues that are collected and that the player will have to arrive at an answer afterwards. I'm guessing a multi-choice will appear when this has to be done but, I doubt the answer will affect how the story goes until maybe the end game. One of the other characters will probably just end up correcting the player. 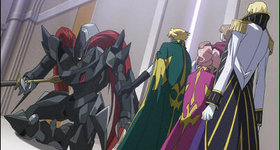 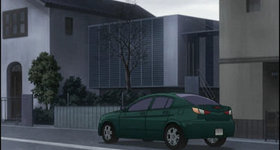 Episode 25 Summary, A Loss without a Reason As Kunio inspects Kanaru's home, he...

I was so disappointed T_T

Yes, a lot of people have heard about Naoto and have even posted a video of him on the other post


I want to see Yukari on P4

Almost sounds like Akihiko. Don't tell me that Naoto became a detective to solve a case related to his past? Yes, it's just somewhat obvious... ^_^;

23 Jun 2008, 1:20:04 am
Ah, finally some info about him. Detective Prince sounds pretty neat! It's interesting how most P4 characters are related to the television/media in a way. Yeah, I know tv plays a big role in the game but still, it's an odd "coincidence".

Thanks for the translation.