Finally! A date for Dragon Quest Swords! It's not an exact date but it's still something! According to S-E's press releases on Gamespress.com, it will be due for Europe sometime next Spring 2008 and they already have the website up and running. For some reason, the press release says "Spring" but the website says "Summer". I hope it's the former because that means we'll have it earlier.

Also, the DS ARPG that was known as "Subarashiki Kono Sekai (It's a Wonderful World)" in Japan will be reaching European shores too but renamed as "The World Ends with You". Probably because the former English name is already taken by other entertainment titles. Again, it has the same vague release date as DQS.

I stopped writing my scripted guide for Wonderful World for some time now and don't plan on resuming it so, this will be good news for people wanting to play and understand the story. You can read my review of the game on Gamebrink. The game has some great music!

There's no news for NA releases yet but I'm sure they'll be getting the games too sometime. The European press releases were as follows.

London (5th December 2007) – Square Enix Ltd., the publisher of Square Enix® interactive entertainment products in Europe and other PAL territories, today announces that DRAGON QUEST® SWORDS: The Masked Queen and the Tower of Mirrors® for Wii™, will be released across all PAL territories in spring 2008.

DRAGON QUEST SWORDS: The Masked Queen and the Tower of Mirrors, available exclusively on Wii, is an action-packed Virtual Experience where the player becomes the hero of the story. As the hero, the player must use the Wii controller to control their legendary sword, and fight off horde after horde of monsters. Slice at enemies, parry with your shield and block attacks to launch powerful counter-combos.

DRAGON QUEST SWORDS contains all the familiar features people have come to expect from the DRAGON QUEST series, such as a system to power up weapons and the ability to perform a large array of powerful attacks. Additional mini-games add to the fun as you catch darts with your shield and try to defeat Slime monsters as quickly as possible to win bonus items.

John Yamamoto, president and chief executive officer of Square Enix Ltd. comments, “We are delighted to be announcing our first Wii title for PAL territories. The DRAGON QUEST series is a phenomenon in Japan that has already sold over 43 million units worldwide, but is still relatively new to Europe. With today’s announcement of DRAGON QUEST SWORDS and the forthcoming release of DRAGON QUEST MONSTERS: Joker on the Nintendo DS™, the series is set to charm more fans throughout the world.”

About DRAGON QUEST SWORDS: The Masked Queen and the Tower of Mirrors

Story
In the town at the foot of Avalonia Castle, a young man enjoys a peaceful life with his father. That young man is you. It is your sixteenth birthday at last, and time to take the Walk of the Worthy, the trial of strength which all young Avalonian males must undergo upon coming of age.

You will need to put all of your training in the ways of the sword into practice if you are to pass the test, and take your rightful place amongst Avalonia’s warriors. Should you succeed – who knows what adventures await you!

"It's a Wonderful World" Press Release

London (5th December 2007) – Square Enix Ltd., the publisher of Square Enix® interactive entertainment products in Europe and other PAL territories, today announces that THE WORLD ENDS WITH YOU™, an exciting new title from the makers of KINGDOM HEARTS, will be released exclusively on the Nintendo DS™ handheld system across all PAL territories in spring 2008.

Previously known as Subarashiki Kono Sekai™ on its release in Japan. THE WORLD ENDS WITH YOU is an innovative new title from Square Enix that fully utilizes the capabilities of the Nintendo DS, and takes major influence from Japan’s modern day culture including its people, music, clothes, food and design.

Set in Tokyo’s trendiest district, the story begins with the lead character Neku waking up to find a phone message stating he has only 7 days before he will cease to exist. Only with the coolest fashions, friends and fighting skills can Neku restore hope to the city’s population and prevent being stricken from existence altogether!

John Yamamoto, president and chief executive officer of Square Enix Ltd. comments, “Square Enix has traditionally been associated with RPG’s set in fantasy lands, but THE WORLD ENDS WITH YOU is our first ever game to be set in modern times and real-life locations. The use of the Nintendo DS functionality is second to none. We believe gamers of all ages and abilities will be able to enjoy all that THE WORLD ENDS WITH YOU has to offer.”

About THE WORLD ENDS WITH YOU

Story
The story begins as our hero, Neku, wakes up amidst the hustle and bustle of Shibuya, Tokyo. Confused and disoriented, he receives a message on his phone warning him that he will cease to exist unless he completes a certain mission. With his life seemingly on the line, Neku plunges into the back streets of the urban labyrinth… 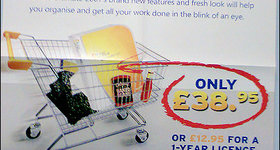 Decided to purchase Microsoft Office 2007 Ultimate Edition because I saw a poster...

So, even after all the magazine coverage and weekly idols cosplaying as Sylvia...