Ah, there's always someone out there trying to make some quick cash eh? Usually I would say these "enterprising" individuals are causing fans problems but in this case, I suppose it's just half and half.

It appears that last month, someone managed to sell off the Byousoku 5 Centimeters film strip they had via Yahoo Auctions for an end price of 32,500 Yen (US$300)! The price even started off at 4800 Yen (US$45)!

If you don't know already, these film strips (cut from the actual reel) are packaged together with the Japanese limited edition DVD boxset and the scene you get is random.

So which scene was it? Well, it had to be one of the memorable parts of the movie of course and it was none other than the warm little reunion scene at the train station on a cold winter's night.

Limited edition boxsets still appears to be plentiful in supply so, that's why I said this sort of thing isn't really preventing the real fans like myself from getting a copy but, it would have been good to know if that scene landed in the hands of another fan at its intended price.

If you plan on getting the boxset yourself just for the film strip or OST, make sure it's the Japanese edition and not the Hong Kong version. The HK version doesn't contain either items.

Also, if you're after the ending scene above where the grown up Takaki is standing by the crossing, you're out of luck. Apparently someone already has that scene because I saw them post a photo of their film strip on a forum. 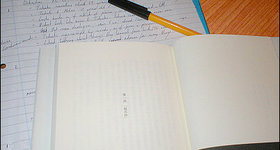 Exams are over and I have a week free before the second semester begins so now I can...

26 Jan 2008, 8:40:17 pm
I never mentioned how many Japanese LEs were produced on this blog because I don't know the actual number. Someone on the Animesuki forums estimated there might be around 14,000 copies though.

And yeah you're right. There must be multiple film strips of the ending scene. I've updated the post with a screenshot of the scene I was talking about now to avoid any confusion ^^;

26 Jan 2008, 7:57:34 am
Oh, damn. That scene would make for an awesome film strip. I think you mentioned this before on your blog, and I'm not exactly sure, but how many film strips could be gotten out of an entire film reel? Or how many LE sets were there, for that matter?

I don't get that part about the ending scene that you mentioned, though. Given the number of frames per second, wouldn't there be quite a few variations of that scene from the film strip?